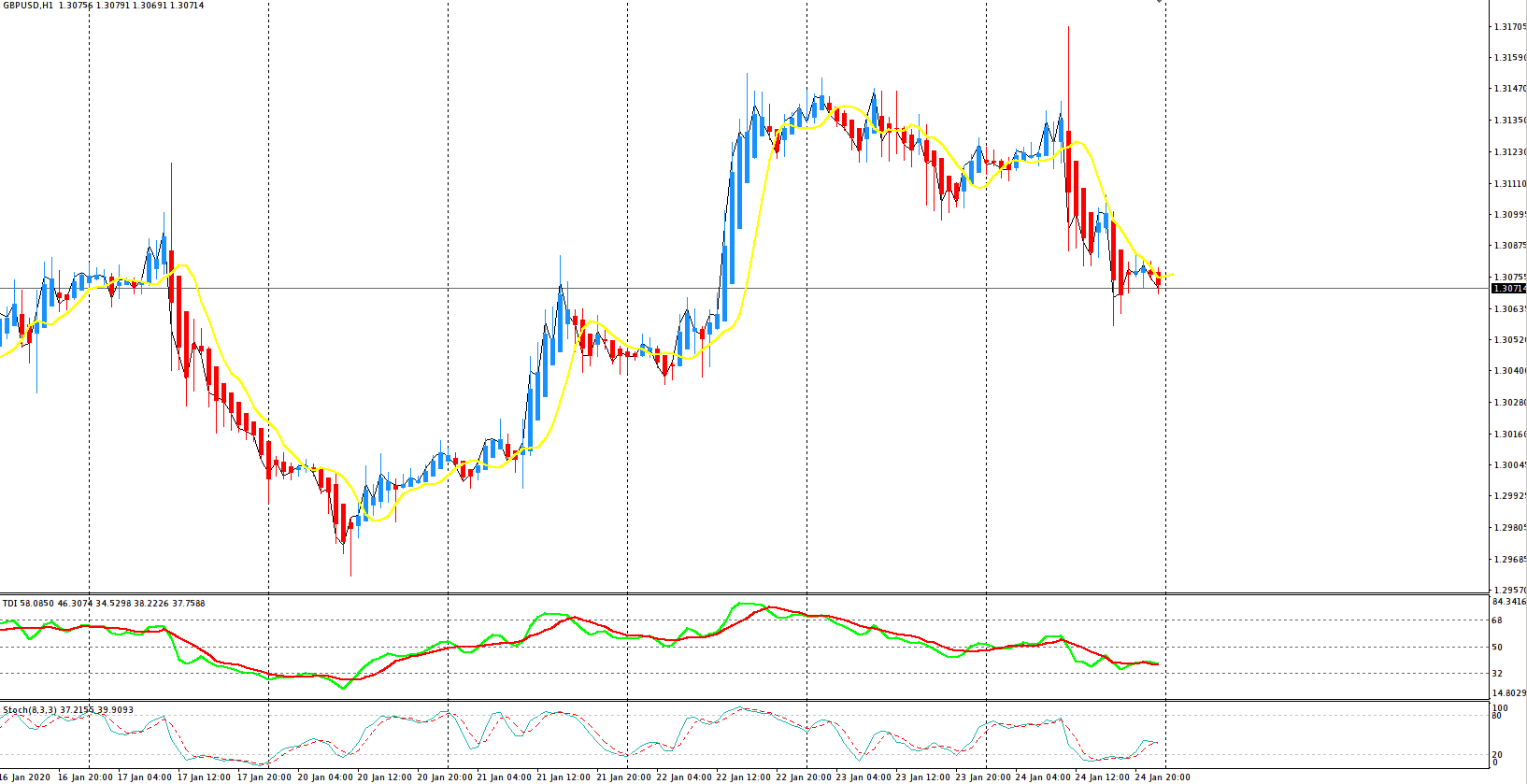 Today we will let you learn more about the Trading Made Simple System For MT4 which is simple style of trading as you can understand from the system name. The screenshot we have today for the system is on the Great British Pound versus the United States Dollar on the hourly time frame displaying to you the TDI indicator along with some moving averages and the stochastic.

The stochastic settings here are very simple in the Trading Made Simple System For MT4 which is eight, three, and three. Moving to the yellow moving average settings are period five with shift of two simple one with typical HLC/3, and the second small line is related to the synergy_APB system itself so, once you load up the template to your MT4 it will be placed automatically.

In the article you will find the whole Trading Made Simple System For MT4 available for download so that you don't need to waste your time searching it on the internet. Yes! we care about your time. Candles are light blue and red.

Now, what is the TDI indicator made of? We know that you are asking that now so, let us answer that simple question for you!

The TDI is a merge of the RSI, two Moving averages, and Bollinger Bands with Fibonacci.

1- The bollinger bands settings is 34, the fibonacci settings are 1.618 which is the golden price range, and one basic moving average and the other one setting is 34.

The issue of all the versions is the repainting which means the indicator repaint itself based on the price future changes which makes the backtest results completely fake results that you cannot depend on it.

What you need to know is that the programmers solved some points in it to make a no repainting version in real time execution and we will talk about that now.

Now, let us dig in more into that system, the RSI that is inside it is fast period two and the red moving average or whatever the other color inside the RSI is slower moving average 7. The market base line is as we mentioned above 34 and we explained to you the volatility bands as well including their calculations and used settings.

The overbought would be when the price is above the 68 line, the over sold is when it is below the 32, and the middle support, or resistance are the 50 line.

Let us see a small compare between the three versions differences;

That is the main differences between the three versions wether you use the repainting or no repainting ones.

How to use Trading Made Simple System For MT4

The best way to enter your trade after seeing the four hours time frame crossed and gave the signal already is to wait 5 minutes time frame confirmation when it crosses back into the direction. If you do that you will avoid the big drawdowns.

You should only take your trade if there is a strong cross and that is why we mentioned the 5 minutes time frame confirmation so that you do not get tricked by any fake cross that will reverse later. So, the crossing must look line an mathmatical angel to enter your trade otherwise don't.

When to exit the trade?

You exit your trade when the lines make like 25% of a circle that means the price might start returning and in that case it is better to close your trade. If you see the same thing happening giving you a trade sign that would be a weak trade sign and in that case you should ignore opening your trade, and keep waiting for stronger signal.

You can also trade on bouncing when the 25% of circle starts to appear but that needs a very experienced trader to decide in its time whether he should jump in the trade or not so be careful.

With all that said don't forget that you have in the indicator fibonacci levels and other stuff like bollinger band so all that you should merge together to get you the best out of that indicator.

You can use the divergence that happens on the TDI lines.

i'd say that the disadvantage is that these Trading Made Simple System For MT4 indicators are repainting itself but as you see there are a no repainting versions which you can use so I really consider that as an advantage of that system as a feature, but you still needs to test the system physically to know if it will work fine for you or not.

Summary of Trading Made Simple System For MT4

The Trading Made Simple System For MT4 looks like a simple and nice system with direct and known rules, but be careful while using it also as the last version back to 2016 and the market always changes.