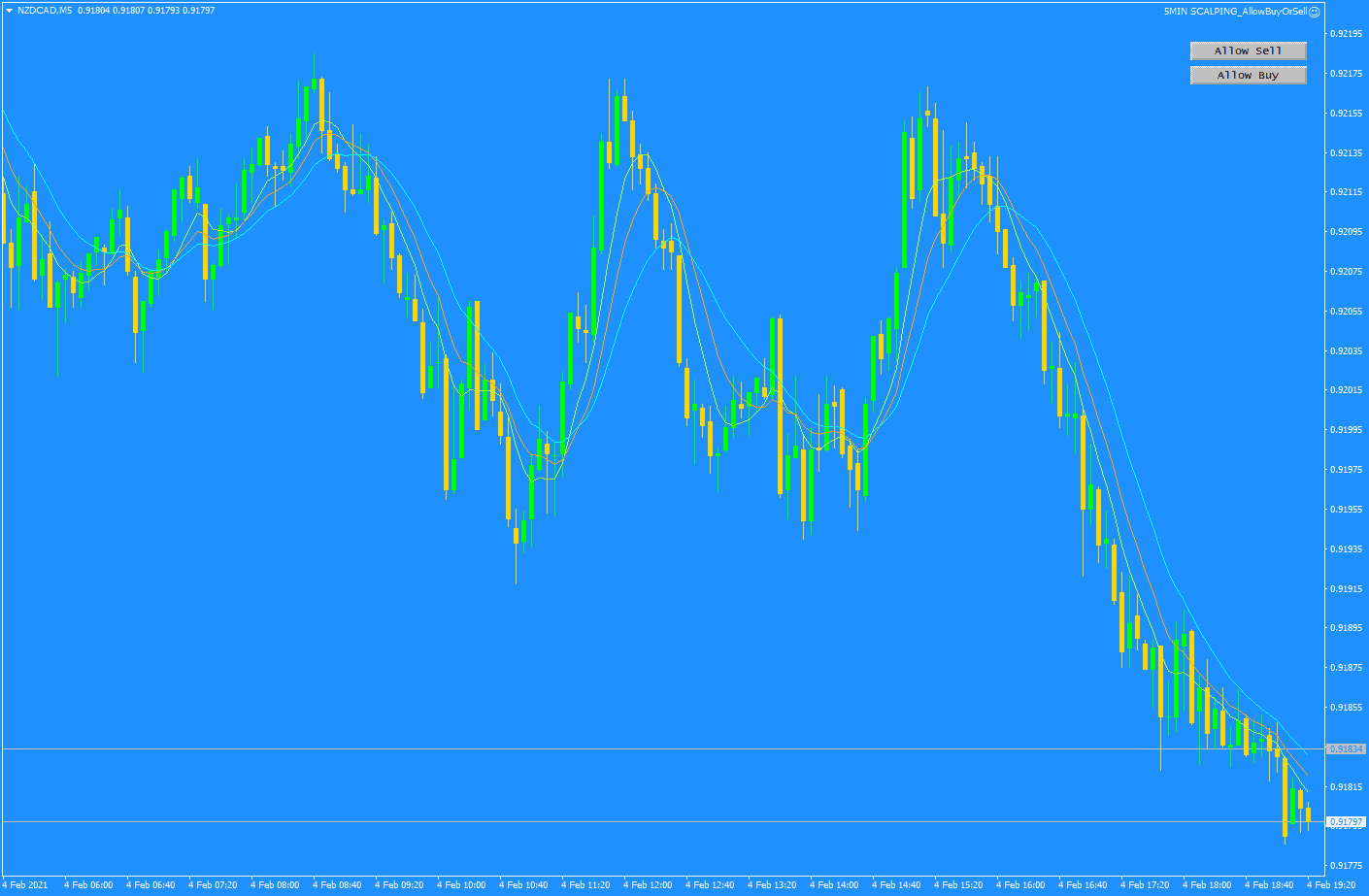 As the name suggests, the 5 Minutes Scalper Expert Advisor For MT4 is designed for trading the five-minute chart of any foreign exchange symbol, but the major currency pairs are preferable due to their tight spreads. In the image above, three moving averages are applied to the current timeframe to determine the trend and the direction of trades. However, other moving averages are used on another timeframe to act as trend filter. This way a trade or set of trades is only taken when multiple timeframes agree.

When run in the strategy tester using three months of test data, the trading system generated profit with a minimal drawdown and low win rate. However, this test duration is too short to be used to judge the profitability of this trading system. Thus, the user is enjoined to do further testing to confirm this positive result and then possibly use the robot in trading. 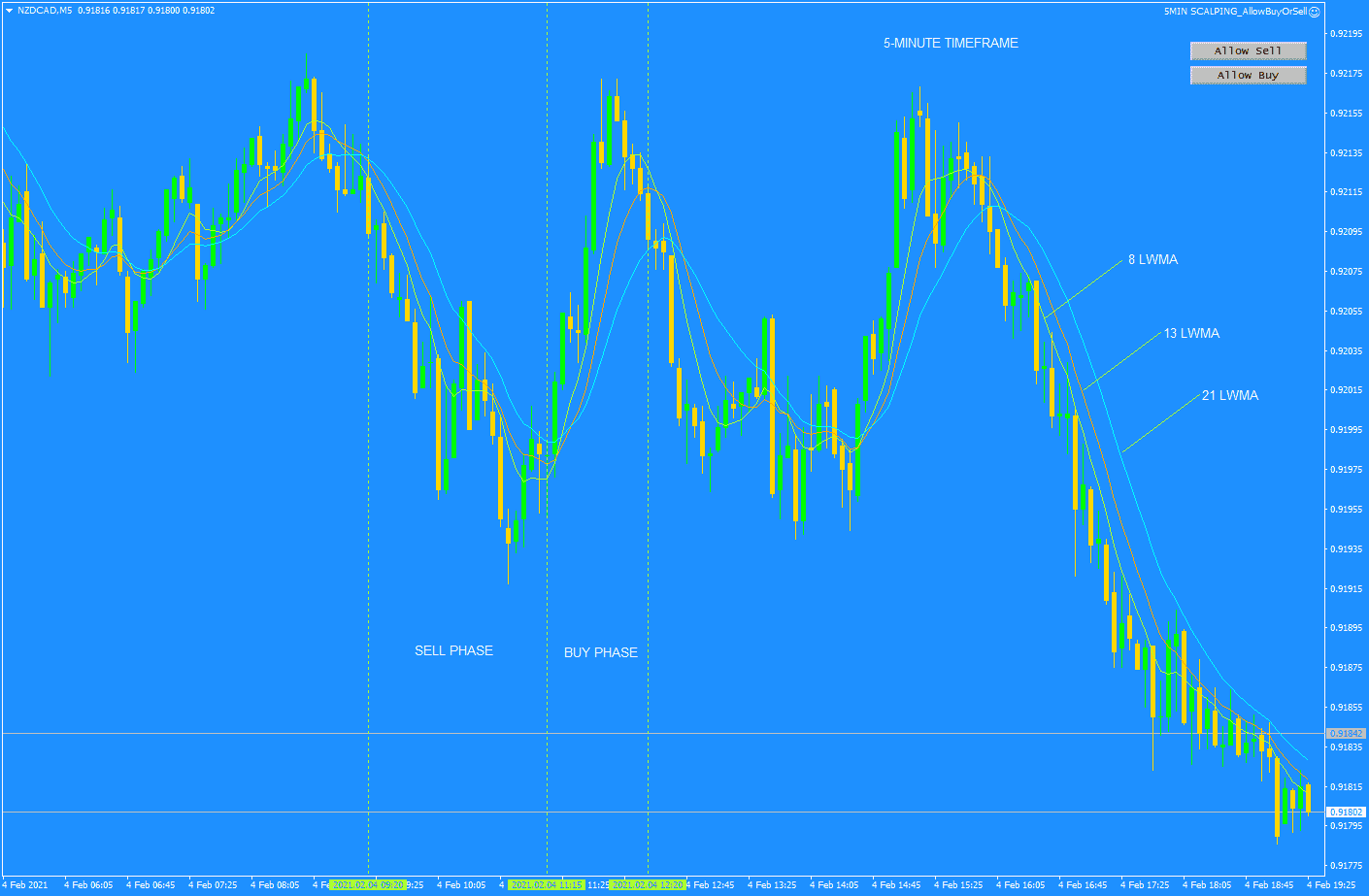 The 5 Minutes Scalper Expert Advisor hunts for trades at the start of every candle. When the previous bar has closed and the current bar has opened, the expert advisor checks the drawdown first if it is manageable. If that is the case, it will inspect the open trades next, if there are any, to determine if their stop losses are ready to be adjusted to breakeven or more. Then the robot will count the number of bars on the active chart if it is not less than 100 and it will check if the take profit is not less than 10 pips. When the preliminary checks prove successful, the search for trade entry begins.

There are a few variables in Inputs that the user must understand and learn to use to make the best use of the trading system. The relevant variables with their default values are listed below:


This trading system musters three sets of technical indicators in order to find a high-probability trade entry. These indicators must come to an agreement before a trade entry is taken by the expert advisor. The indicators, settings and manner of signal generation are discussed below:

When a trade signal has been determined and confirmed, the expert advisor will open a trade with a lot size of 0.01 as set out in Inputs. Each trade has a specified stop loss of 20 pips and a take profit of 50 pips, but these stop orders are not the actual values when the trade is executed. During trade entry, the spread is deducted from the take profit target and added to the stop loss limit.

When the entry rules are satisfied after the first trade has been taken, additional trades will be opened as long as the maximum number of 10 trades is not reached. The subsequent trades use the same position size of 0.01 lot, stop loss of 20 pips plus the spread, and take profit of 50 pips minus the spread.

Apart from the take profit and stop loss prices, the orders opened by the 5 Minutes Scalper Expert Advisor can be closed at some other prices. The reason for this is the trailing and breakeven functions. While these functions attempt to secure profits and keep them in the winning side, the balance between reward and risk has been disturbed in the process. The end result is a high win rate with lower amounts of profit. In this case, the risk-reward ratio and win rate are out of sync.

The 5 Minutes Scalper Expert Advisor For MT4 – Room for Improvement

In the strategy tester, the 5 Minutes Scalper Expert Advisor performed well at the beginning, but the equity curve began to turn upside down toward the end of testing and ended a little above zero. Still the trading system managed to return a minimal amount of profit.

One can say that the overall positive performance was just a random result. It is possible that the market condition at the time of testing was favorable for the trading system so it yielded a good result. Looking at the development of the equity curve during testing can make one agree with this opinion. The expert advisor made money when the market was trending in one direction but lost money when the trend reversed or corrected.

One potential flaw in this trading system is the randomness of trade entries. The trades are scattered all over the chart without clear spacing. As a result, trades bunch together in a narrow price area. Allowing trades to overlap is not a good idea. To address this issue, a minimum distance should be set between trades. This change, though, can be done only programmatically. When such change is implemented, it is best to make the minimum distance between trades available as a variable in Inputs.