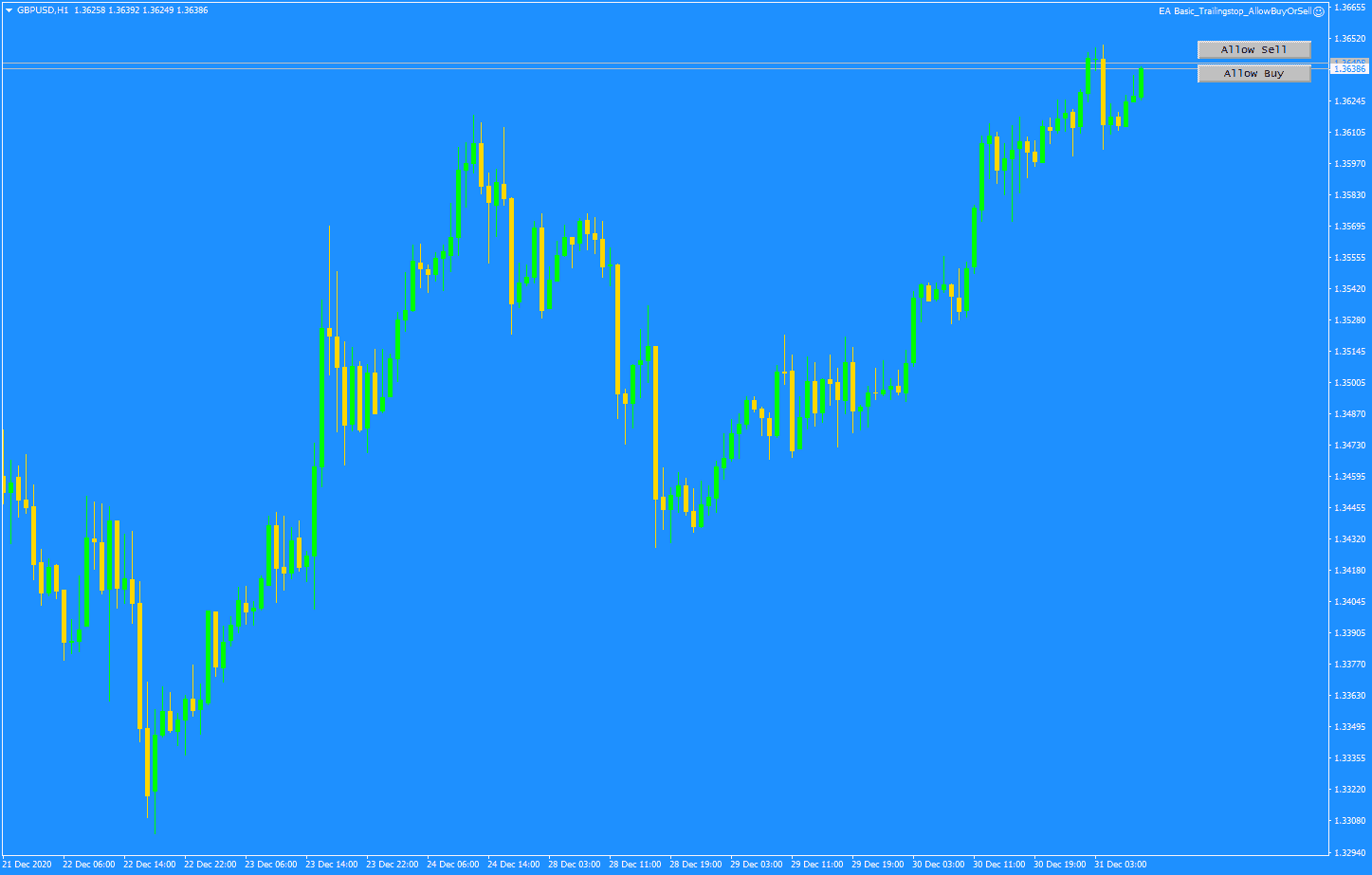 The Basic EA with trailing stop Expert Advisor For MT4 is a very simple algorithmic trading system for MT4 platform. It does not use a technical indicator or another entry method to find the market bias and trade in that direction. It relies on the user to define the direction of trades and then it carries out its bidding. This expert advisor makes use of stop orders and trailing stop to generate profits from the markets.

This trading system is suitable for use in trading accounts opened in both four-digit and five-digit brokers. It can trade any timeframe and any symbol. If the user wants to use it in other symbols, one instance should be attached on each symbol, and the user does not have to modify the magic number every time. The robot will work just fine. It will not interfere with trade operations performed in other symbols, and it will not hamper the performance of other trading systems being used on the same trading account.

While this robot is so simple in its design, a short test run reveals an interesting performance. The testing covered five months of market data. With the default settings, testing ended close to breakeven. It is fascinating to find out that the robot took about 284 trades in total and managed to win 217 times for a win rate of around 75 percent. This win rate is high for any type of trading system, automated or manual. Plus, the maximal drawdown is less than one percent, which is very minimal. The question that lingers is why the robot lost money when the win rate is excellent. The user might find the answer when he conducts his own testing. 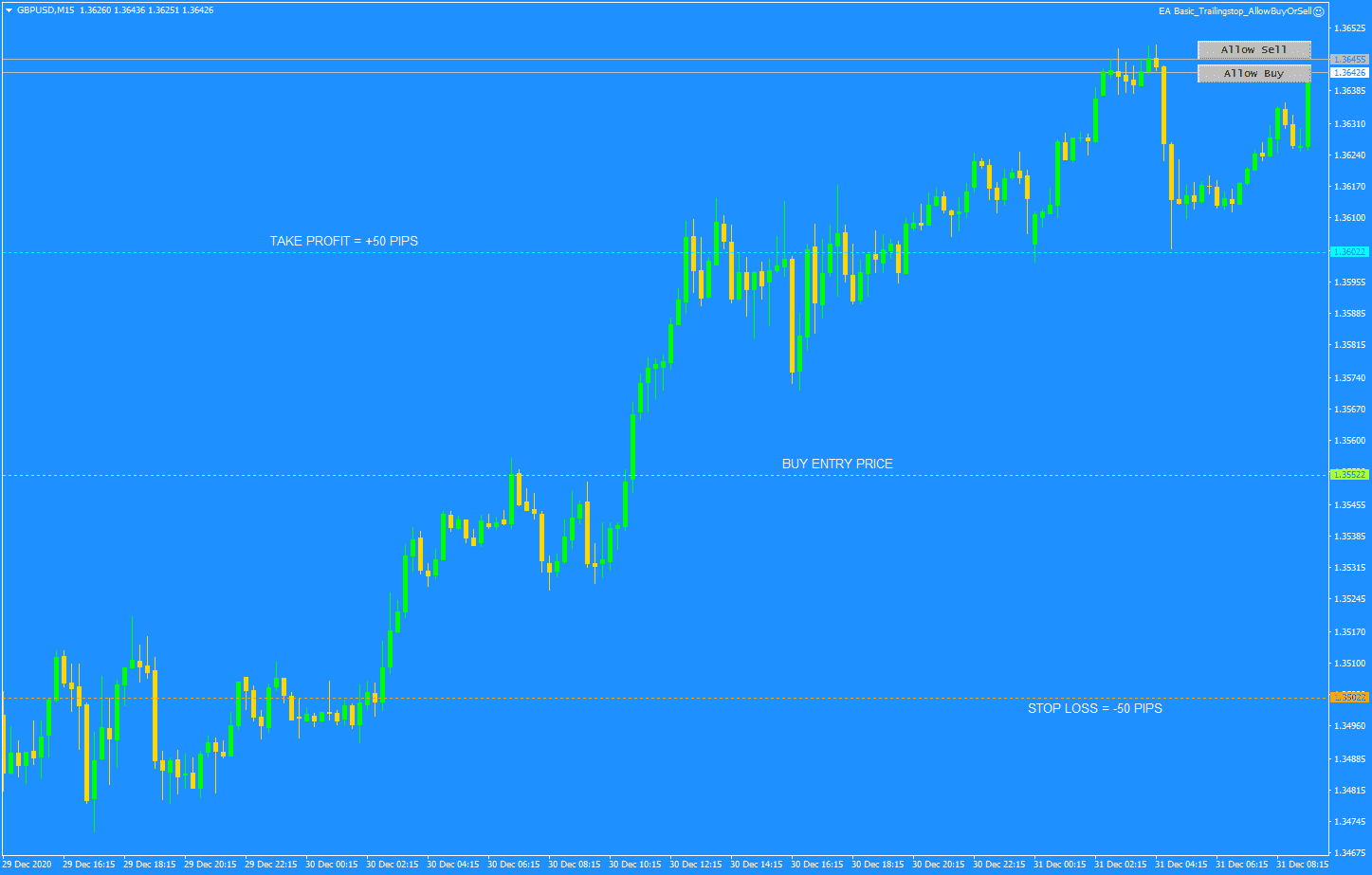 The Basic EA with trailing stop Expert Advisor for MT4 does not wait for a new candle to form to take action. It runs by the tick. When a new tick comes in, the robot checks only one thing. It cycles through the orders in the trade pool to find an open order in the current symbol. If there is one, it determines the trade type. If the trade is either a buy or a sell, the robot does not perform other operations. It goes into waiting mode. On the other hand, if there is no open trade, the robot will immediately send an order to the trade server. The type of order being sent is either buy or sell depending on the parameter set by the user in Inputs. The default trade type is long.

As already mentioned, trades taken by the Basic EA with trailing stop Expert Advisor for MT4 have a stop loss and take profit. However, the robot uses trailing stop to actively manage trades. The trailing stop function comes into play when a trade becomes profitable and has gained at least 15 pips. On the first run, the robot moves the stop loss to breakeven for a risk-free trade. Thereafter, as long as price moves in the direction of the trade, stop loss is adjusted every step of the way even with as small a price movement as one point. The robot will maintain a distance of 15 pips between market price and stop loss until the trade is closed by the take profit or by the adjusted stop loss. Either way, the trade so closed ends positively for the trading account.

Several rounds of testing were done to determine how the Basic EA with trailing stop Expert Advisor for MT4 fares in testing mode. In this testing, five months of data are used. Several passes of testing were done as the robot shows an interesting result in the first test run. The robot took a lot of trades in a span of five months, averaging 55 trades per month, and the win rate is around 75 percent.

In the second round of testing, trailing stop was disabled, and the result is now positive. The robot gained a small profit, the small drawdown is maintained, and the number of trades was cut in half. In this test run, the risk-reward ratio is one (50 pips risk and 50 pips reward). When the risk-reward ratio was adjusted in favor of reward (i.e., 50 pips risk and 75 pips reward) with no trailing stop, more profit was generated, drawdown is still small, trade number was cut in half, and the win rate goes down to around 45 percent.

When risk-reward ratio was adjusted further (i.e., 50 pips risk and 100 pips reward) again with no trailing stop, the result was positive but the difference from the previous test run was small. Therefore, increasing the risk-reward ratio further might not lead to better results.

This testing showed that the trading system has a potential to make money for the trader. However, the trader must find the best settings. It is crucial that the user picks the correct trade direction to become profitable using this robot. In the initial testing, the robot made money as the bias chosen was correct. When the reverse direction was selected in later testing, the robot lost money.

This trading system could use a little improvement to be more effective. As it stands currently, it is not a complete automated trading solution in the sense that it depends on the user for input as to the direction to trade. The thing is finding trade direction is a simple task. It can be done with the use of simple tools such as one or two moving averages. Allowing the market to dictate the trade direction might give the robot more chances of success as it can shift the trade bias as the need arises.

While the number of tests performed shed some light into the potential of this trading system, further testing might need to be done to determine its true performance. Running the robot in the strategy tester with optimization is one area to explore. This will help the trader find the best settings that would give the best results. While this more in-depth testing takes a lot of time and computer resources, it can give the user more confidence that the trading system not only works as intended but is capable of returning profit. If the user is capable or knowledgeable, he can run the robot in a virtual private server in testing mode so that testing can be done without interruptions.