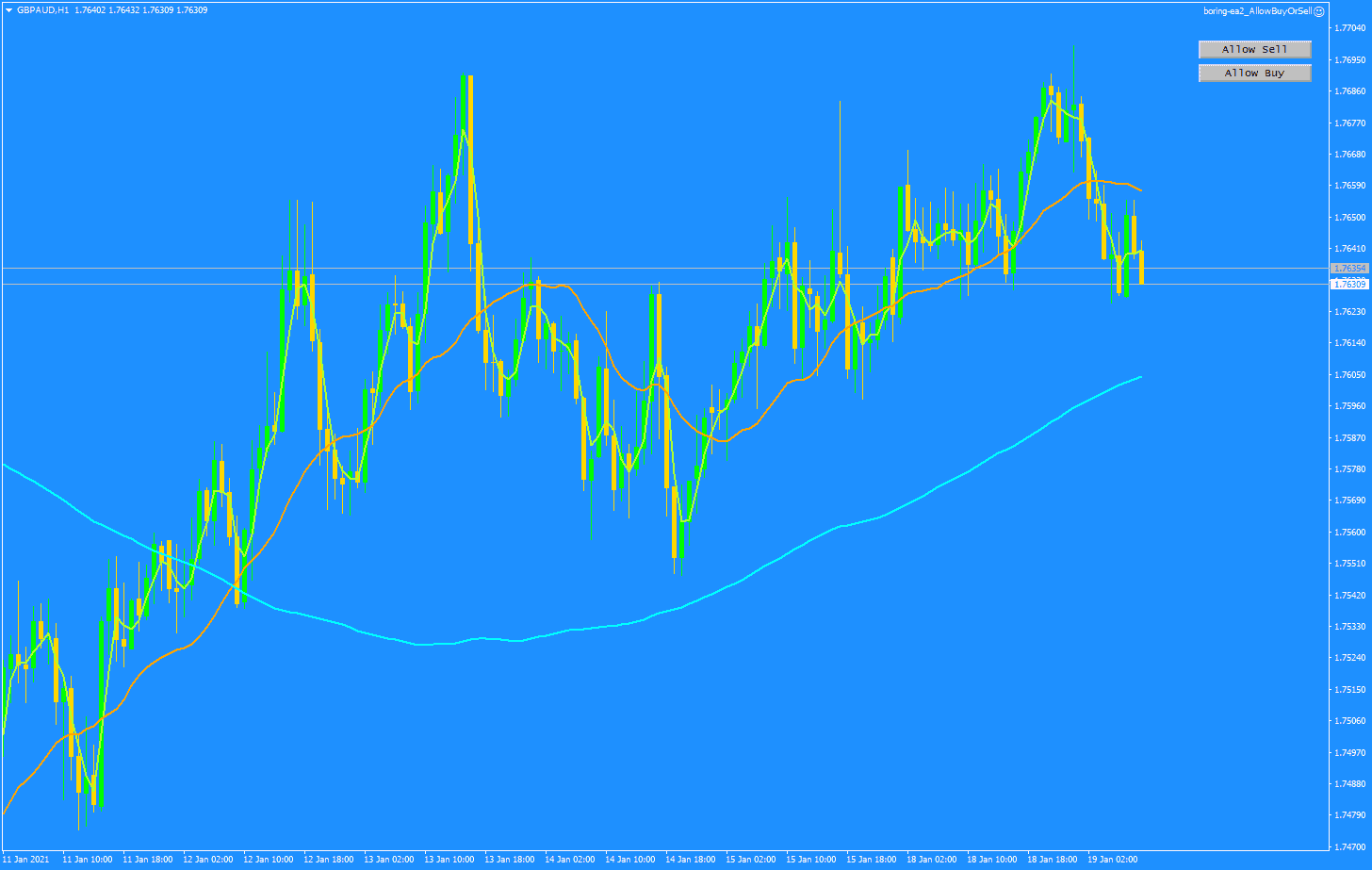 The Boring Expert Advisor for MetaTrader4 is a simple program developed for users of the MT4 trading platform. This expert advisor is not designed to trade on behalf of the trader. Instead, its main purpose is to send out alerts and messages to notify the user of a potential trading opportunity in his financial instruments of choice. The expert advisor works like a technical indicator, and it can be programmed as a custom indicator for better use of computer memory.

Since the program is not intended for automated trading, the user will not see open trades when running it in the strategy tester. The user can only see messages in the Journal tab that moving averages have crossed in one direction or the other for the active symbol and current timeframe. This does not mean that the expert advisor is not working. It only performs its algorithm. 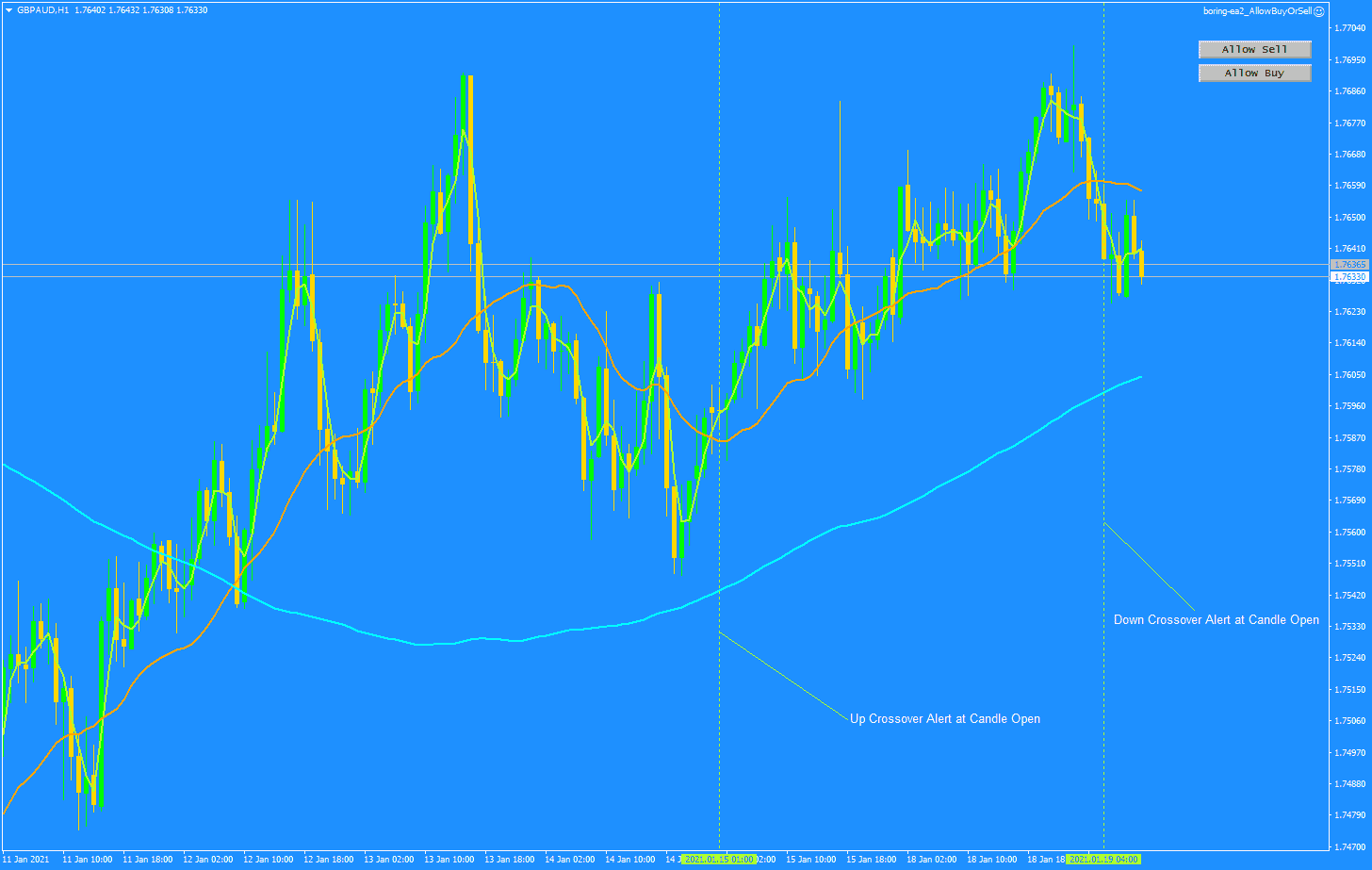 The Boring Expert Advisor for MetaTrader4 is written as an expert advisor but functions as a custom indicator because its operation ends after sending an alert or notification about specific conditions and it does not open trade positions. The algorithm does not run by the tick or when a new candle has formed. It works in a different way, that is, when a certain number of ticks has been counted.

Every incoming tick is counted as one regardless of value and stored in a variable. When the counted ticks equal to 100, the program checks the moving averages for crossover and sends notifications and displays alerts on the main chart. After performing such actions, the variable holding the number of ticks is reverted to zero. Sending notifications and displaying alerts are done in one iteration.

The program does not come with parameters that the user can adjust in the Inputs tab. Attaching the expert advisor in any chart is a straightforward process. The user does not need to worry about adjusting values at the outset.

The technical indicators in use, their settings and manner of generating signals are as discussed below:

These three pairs of moving averages are not used by the expert advisor to execute buy and sell trades. Once the moving averages have crossed either up or down, information about this crossover is sent as a notification to the user’s mobile phone through the MT4 mobile platform and is displayed as an alert on the MT4 desktop platform.

Since there are three sets of moving averages working in tandem, six types of alerts and notifications will be displayed and sent. Information about the relevant symbol and period where the crossover has occurred will also be relayed to the user. The user can use this information to decide if an opportunity is tradable or not.

Since the Boring Expert Advisor does not execute trades, no orders will be managed by the expert advisor at any point in time while the program is running. The robot only sends alerts and notifications and once done it waits for 100 ticks to come in before it sends another signal.

The Boring Expert Advisor For MT4 – Room for Improvement

Had the Boring Expert Advisor been created as a custom indicator, it would not be necessary to remove it first before another expert advisor can be run on the same chart. In that situation, the program would still perform the intended functions. If anyone wants to use the signal provided by this program in his manual trading, it is highly recommended to recode the program as an indicator and then save it in the Indicators folder. However, this course of action is only possible if the user has working knowledge of the MQL4 programming language. The user does not need to be an expert coder, though, to do this simple code adjustment.

This program can become a full-fledged expert advisor if it contains the function for opening trades. The functions for trade modification and trade closure do not need to be included. Making this change would require only a few lines of code, but it can help determine if the program can generate profits using the signals provided by the moving averages.

If the function for trade entry is added, it is important that stop loss and take profit are explicitly defined for each trade taken. Otherwise, the user has to manage each trade manually, which defeats the purpose of having an expert advisor in the first place. The user or program creator might consider changing the manner of determining the frequency of running each iteration. Executing the trade algorithm in every candle is better than running it in every 100 ticks.