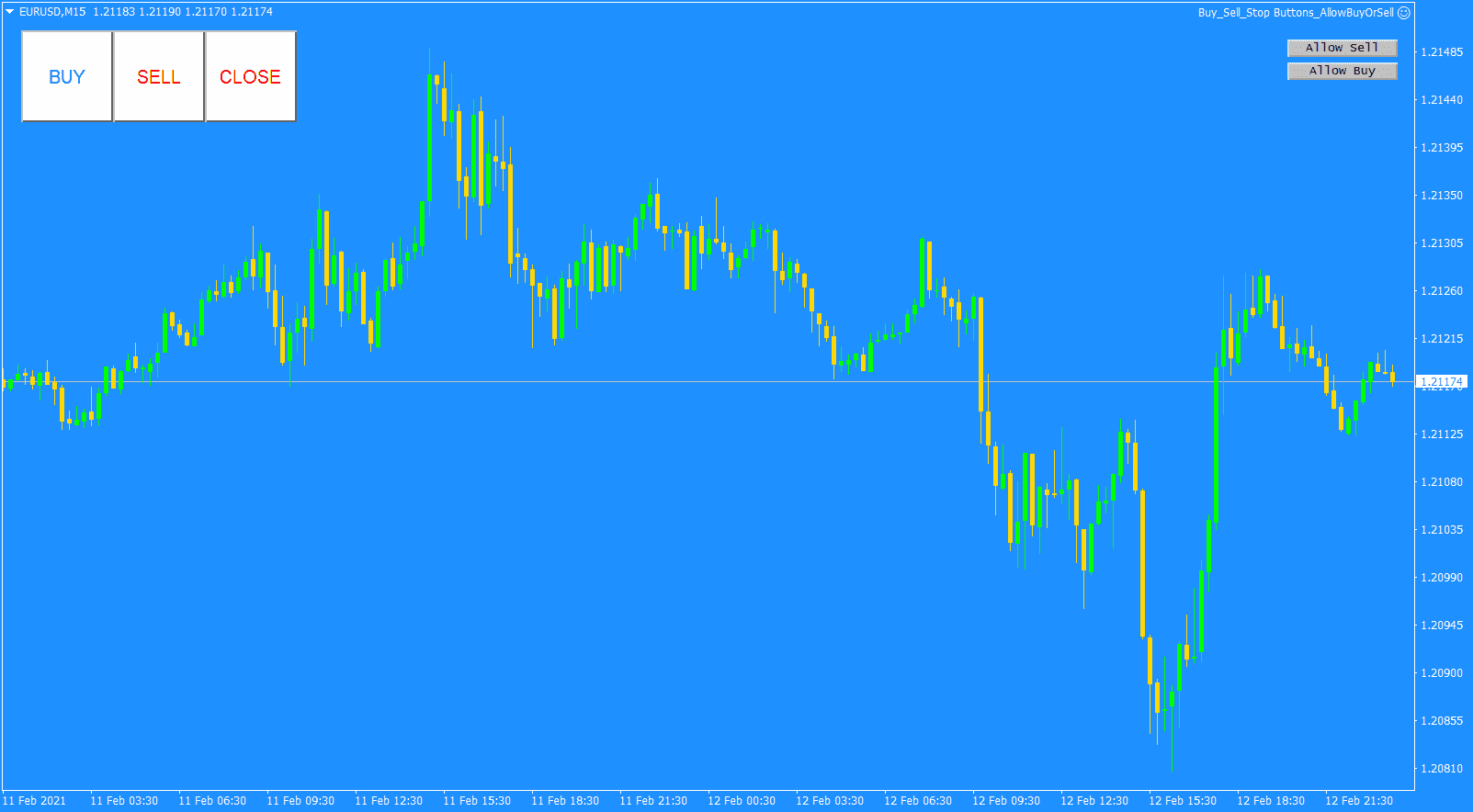 The Buy Sell Stop Buttons Expert Advisor For MT4 is a semi-automatic trading system for MetaTrader4 trading platform. It works on one symbol only, that is, the symbol where it is attached by the user. If the user wants to use this expert advisor in other trading symbols, one instance of the program should be attached to each of those symbols.

As the name suggests, the robot might be thought of as a program that creates buy and sell stop buttons on the chart that the user can interact with when he intends to open trades. Such assumption is not correct in the actual scenario. It can be said that this expert advisor is incorrectly named. In reality, the robot creates buy, sell and close buttons on the chart (see image above).

It becomes clear that the expert advisor actually allows the trader to manually open trades and manually close the trades. While manual trade entry is a requisite, manually closing trades is not mandatory, just an option for the trader that he can use at any time. This is because the robot can manage the trades on behalf of the trader. In order to do this, the robot needs direction from the trader. The user should set the stage by putting in the desired values in Inputs. 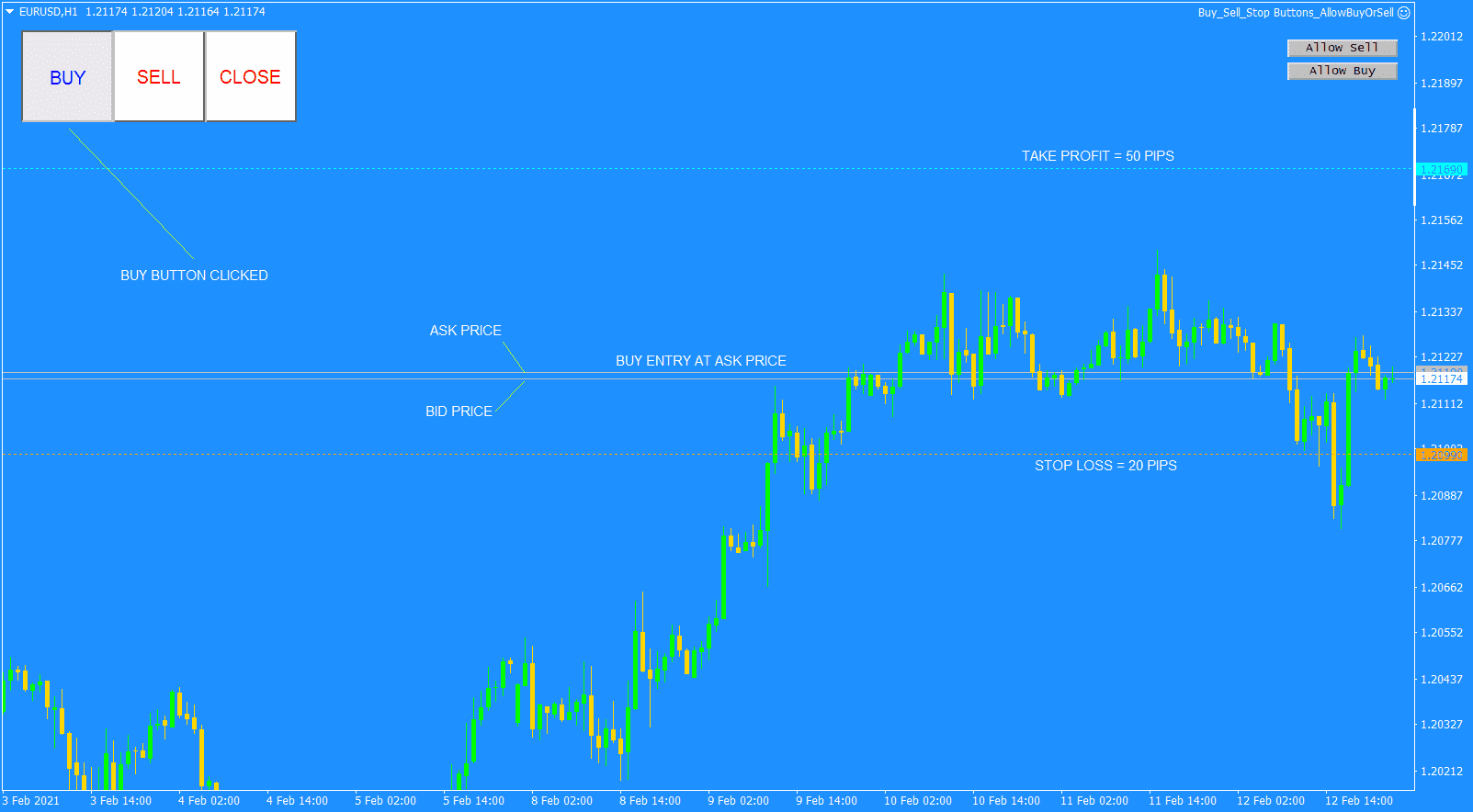 On every tick, the Buy Sell Stop Buttons Expert Advisor executes three major functions. These functions are the trade exit, breakeven and trailing. However, the time spent on each function will be short if there is no open trade yet on the current symbol.

There are a few variables in Inputs that the user must acquaint himself with and tweak as necessary to make the most of this trading tool. These variables are covered in detail below:


The expert advisor does not use a technical indicator for trade entry, only for trade exit. What this indicator is and how it is used for this purpose are explained below:

When the user clicks either the Buy or Sell button on the active chart, the robot instantly sends a trade request to the trade server. This request includes the lot size, stop loss, take profit, and magic number specifications. While it appears that the user can set the lot size to any value of his choosing in Inputs, this value will be overlooked by the robot during trade execution as the maximum risk variable is greater than zero.

To get the lot size, the robot determines the free margin on the trading account and then multiplies the value of the maximum risk. Next, the product is divided by 1,000 and the quotient is normalized to three digits. To prevent order entry errors due to invalid lot amount, the robot checks further if the obtained lot size is within the range of the minimum and maximum lot amounts allowed for the trading account.

By setting the stop loss and take profit of each trade, the Buy Sell Stop Buttons Expert Advisor allows the market to have some say over the outcome of a trade. Because the robot actively manages winning trades, the market can only affect losing trades. If price moves against a trade for 20 pips, the trade will be closed in loss. On the other hand, the moment a trade gains 10 pips, the robot will immediately secure the profit by moving the stop loss to five pips beyond the entry price. If the new stop loss has not been hit and price moves further in the trade’s favor, the trade will be trailed when the gain reaches 40 pips.

In addition to breakeven and trailing stop, the expert advisor may close a trade from time to time as it deems necessary. This happens when the robot receives a signal that is opposite to the direction of an open trade. This signal comes from the Bollinger bands. For example, if the trade under consideration is a buy trade and the indicator gives a bearish signal, the trade will be forcibly closed, but only if the order profit is positive.

The Buy Sell Stop Buttons Expert Advisor needs some improvement to become a more useful tool. While the buttons look good on the chart, it is better if some options or information provided in Inputs are also shown on the main chart so that the user does not have to click on the expert settings to check some details from time to time.

Also, there is one variable in Inputs that is not serving its purpose well. This variable is Lots. Allowing users to adjust this value will only cause confusion if they later find out that the lot size of opened trades is not the same as they have set in Inputs. Had the maximum risk variable been set to zero by default, this should not be a cause of concern. To solve this issue, either the Lots variable is taken out from Inputs, or the maximum risk variable is set to zero by default.