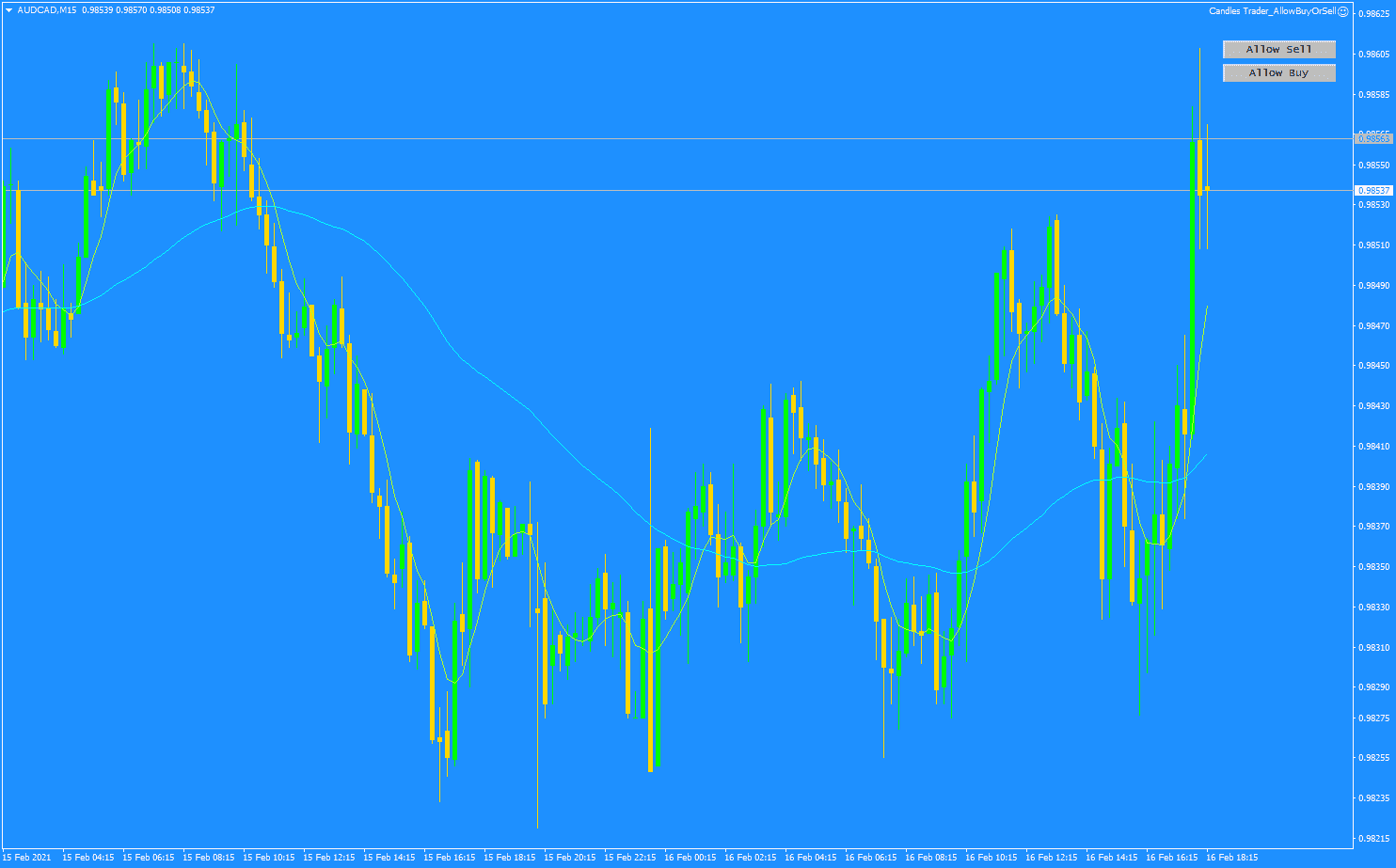 Testing this robot in the back tester showed that it is not ready to be used for live trading. The equity line was drifting downward from the start of testing to the end. Drawdown was relatively high (21 percent), and profitability was low (34 percent). As a result, testing ended in loss for the trading account. Testing was run for five months of historical data using one symbol and one period. Users might find different results if this robot is applied to another symbol and period, so further testing is needed. 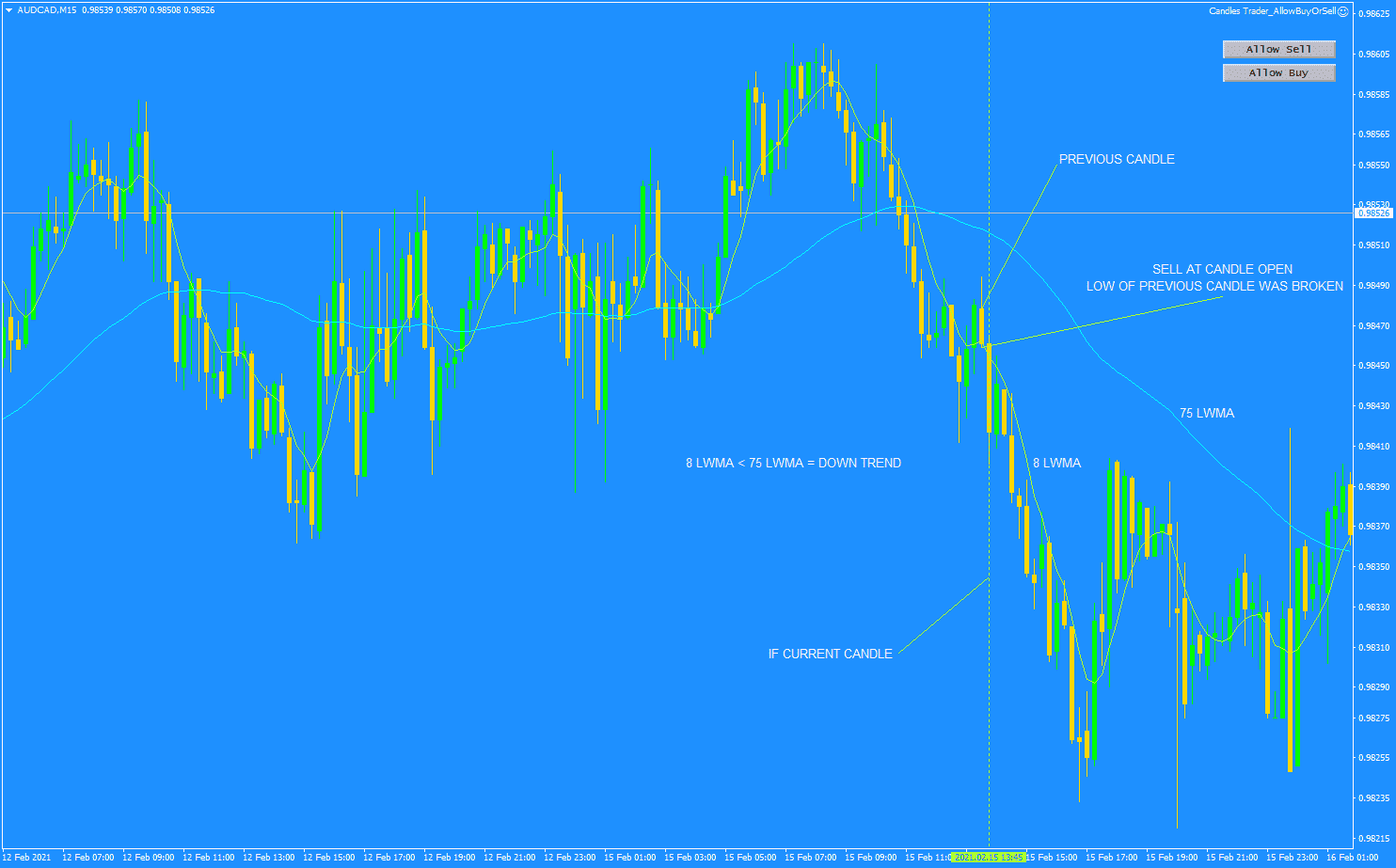 The Candle Trader Expert Advisor opens a trade at the start of a new candle. Prior to trade entry, the robot performs a series of checks first. It looks at the current drawdown if it is within tolerable limits, inspects if there are open trades and if the such trades can be protected by breaking even or stop trailing, and checks the free margin if additional trades can be taken. If the series of test is successful, the robot begins the trade hunting activity.

There are several variables in Inputs available to the user to tweak as necessary. This allows the trader to do trial and error until he finds the combination that yields the best result. The most essential variables are enumerated and explained below:


This expert advisor employs two methods when looking for a trade opportunity and utilizes one indicator to confirm the trade entry. These methods and indicators are explained below:

If a trade signal has been determined and if the number of open trades is less than the maximum value or zero, the expert advisor will initiate a trade with a lot size of 0.10. If the user thinks that this trade volume is high, he can set a lower value. As defined in Inputs, the trade comes with a stop loss of 20 pips and a take profit of 40 pips, putting the nominal risk-reward balance in favor of the trader. However, this balance is short-lived due to the use of breakeven and trailing functions.

The Candle Trader Expert Advisor can open several trades in a trade cycle if opportunities present themselves. Despite the presence of multiple trades, the robot manages each trade individually, not as a single basket of trades. If a trade is positioned on the wrong side of the market, it will be exited at the stop loss price at a loss.

However, if a trade is positioned on the correct side of the market, the trade will breakeven once when it has gained at least 20 pips. Later if it gains more pips, leading to a total of 30 pips of gain, the trade will be trailed continuously until it hits take profit or experiences a reality check. The reality check occurs when price touches the newly adjusted stop loss. The market often works this way to prevent trades from becoming too profitable.

The Candle Trader Expert Advisor For MT4 – Room for Improvement

In testing, the Candle Trader Expert Advisor started opening trades at the middle part of the test period. Once it does, trades are opened all over the chart. Often times trades pile up in a narrow price range. At other times, trades seem to overlap. There is no clear separation between trades. This could be the reason for the low win rate of the expert advisor.

To address the above concern, a minimum distance should be established between trades. It is not necessary that this distance is consistent as with the use of a grid system. What is important is that the trades are separated by a minimum distance. This plan will work perfectly with the current setup of opening trades at a new candle. When this course of action is put in place, it is normal to see trades separated by a distance higher than minimum.

Another thing to improve is the manner of managing open trades. At present, trades are handled individually by the robot in terms of breaking even and stop trailing. It is best for a set of trades to be handled as a unit so that no trade is left behind in case the market changes direction. However, this change would require alteration of the program code.