Closing Profitable Positions Based On The Dollar Expert Advisor For MT4 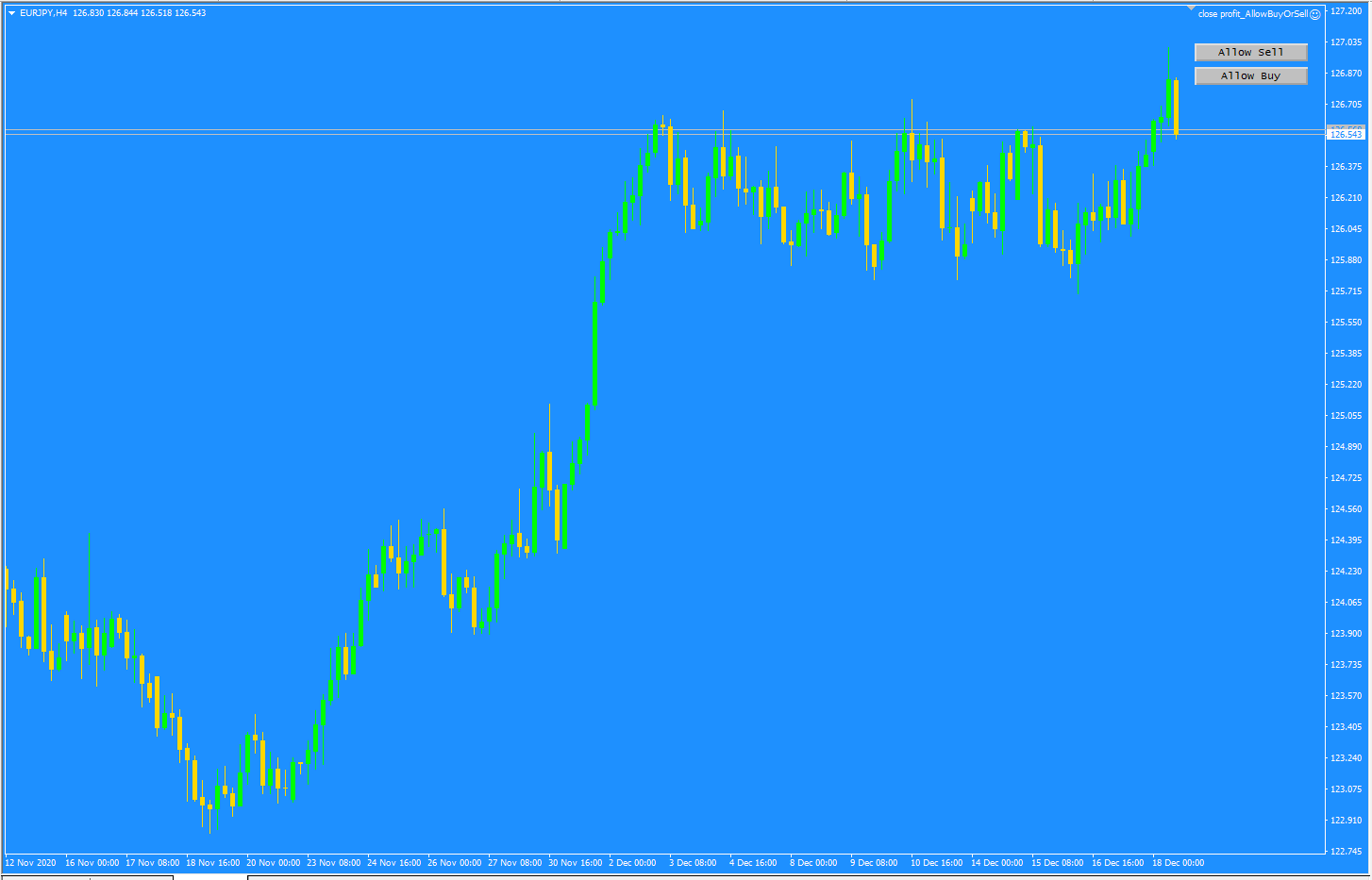 The Closing Profitable Positions Based On The Dollar Expert Advisor For MT4 is a simple expert advisor for use in the MT4 platform. It is suitable for use by traders who are new to trading and who want to automate the process of managing live trades. The robot provides only one variable for the user to adjust at will. This variable is the ProfitTarget, and its default value is 40. This variable does not refer to the number of pips at which the robot would take action. Instead, it is an amount in the deposit currency of the trading account. If the trader is using an account in US dollars, the setting means that any one trade must reach a threshold of 40 dollars before the robot manages the trade.

The user must understand that the Closing Profitable Positions Based on The Dollar Expert Advisor for MT4 does not execute any type of order in and of itself. It is only used for management of open orders executed manually or automatically by other expert advisors or scripts. Apart from this, it serves no other function. 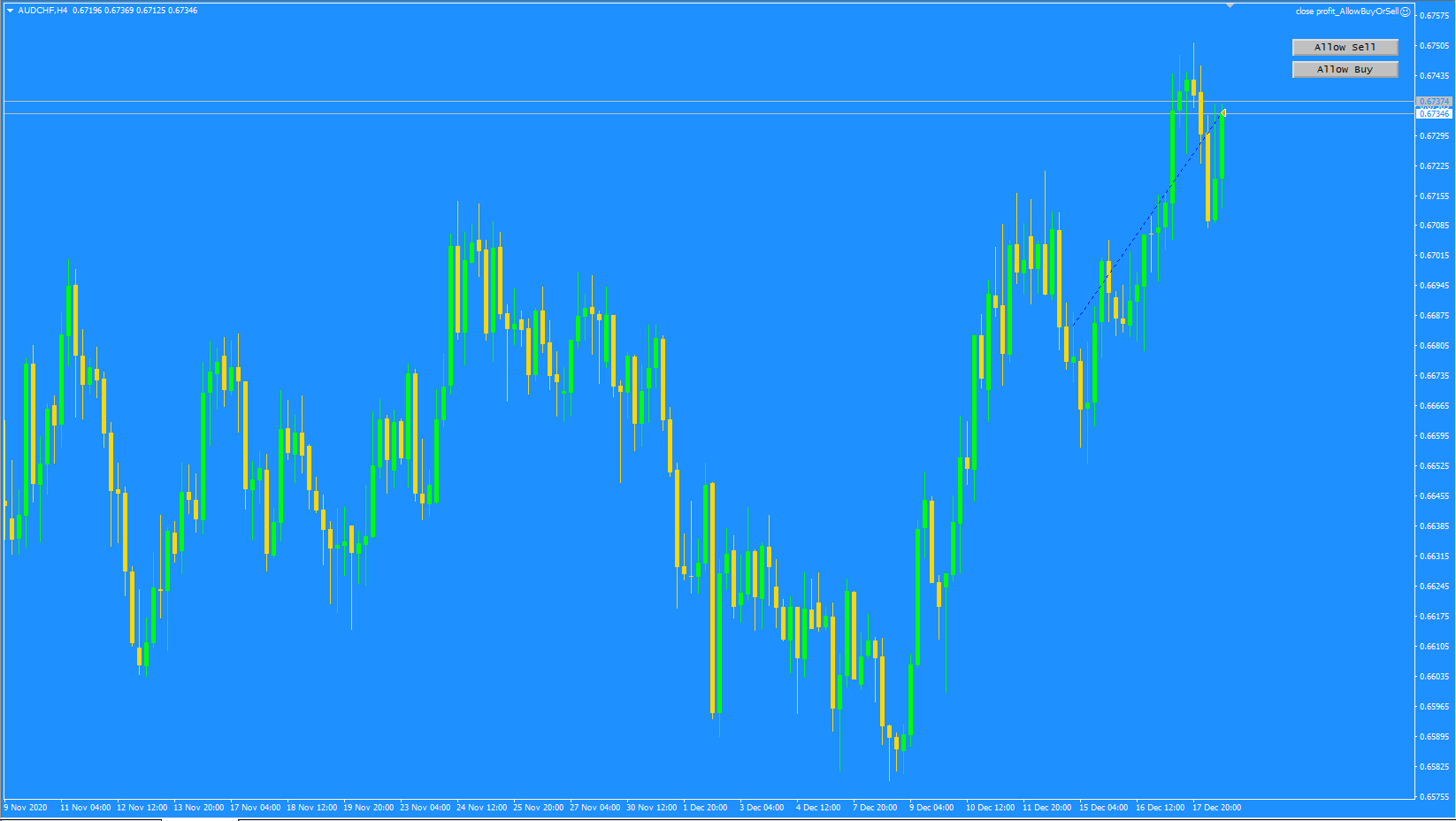 The Closing Profitable Positions Based on The Dollar Expert Advisor for MT4 does not manage its own trades as it does not execute trades. What it does is it closes any trade on a pair or symbol to which it is attached if the trade becomes profitable and has gained at least the minimum amount set by the trader at the outset. However, the user can adjust this amount at any time of his choosing.

In the image above, one buy trade has been open for a while and has become profitable. After the robot was applied to this chart, the trade was closed immediately (see the blue dotted line pointing up and to the right of the chart) as the trade profit is above 40 dollars. That is how simply this expert advisor works.

This robot is too simplistic in its design. As it is, it might be taking space that can best be used by another robot. Once a robot is attached to a chart, no other robot can run alongside the first. The first robot has to be removed manually or replaced by another robot if the user intends to use another one. One way to run two different robots on one pair or symbol is to open another chart window and then dropping the second robot to this chart.

While this robot does not serve much purpose. No other program can be used to perform its function. An indicator is only used for computing values and plotting data on the chart, but it cannot be used to manage trades. On the other hand, a script runs only once and terminates itself afterward. It requires the user to actively execute the script every time it is needed, which can be time consuming for some users, unless they assign a shortcut key to the script. With this robot running in the background, trades can be taken by the trader and allow them to be managed by the robot without their direct intervention. The time saved can be used to do other useful things such as analyzing charts to find other trade entries.

One possible improvement to this expert advisor to make it more useful is to make its scope global. What this means is that, instead of monitoring the trades on only one pair, the robot is programmed to monitor all trades taken in all symbols in the trading account. This way the trader has one less thing to worry about when trading, i.e. trade management. Anyone with programming background especially of the MQL4 language can do this very easily. Removing the statement in the code that checks whether the current order selected is taken on the chart where the robot is attached will do.

There are many other ways that the robot developer can do to improve this expert advisor. One plan of action is to add the trailing stop function. However, this time the variable in the Inputs tab must be changed from dollars to pips. This means that the robot would take action if a trade has gained 40 pips instead of 40 dollars. This way the user does not need to make manual calculations about the suitable value of one pip for a specific trade volume and then make an estimate of the reasonable profit amount in the trading currency at which the trade can be closed. When pips are used as target, the robot would work regardless of the trade volume.

Once this is put in place, the robot would trail profitable trades when they reach the threshold value of 40 pips or any value set by the user. Doing this would result in varying amounts of profit. There are times when the trade is closed early in profit as the market corrects before making a huge impulsive move in the direction of the trade. No one can predict the market, so this scenario can happen. However, if the trader is lucky, one or two trades can be big winners, providing the trader well beyond 40 pips in trade profit. This possibility may happen once in a while. Getting one big trade in a month can be enough to make the trader profitable.