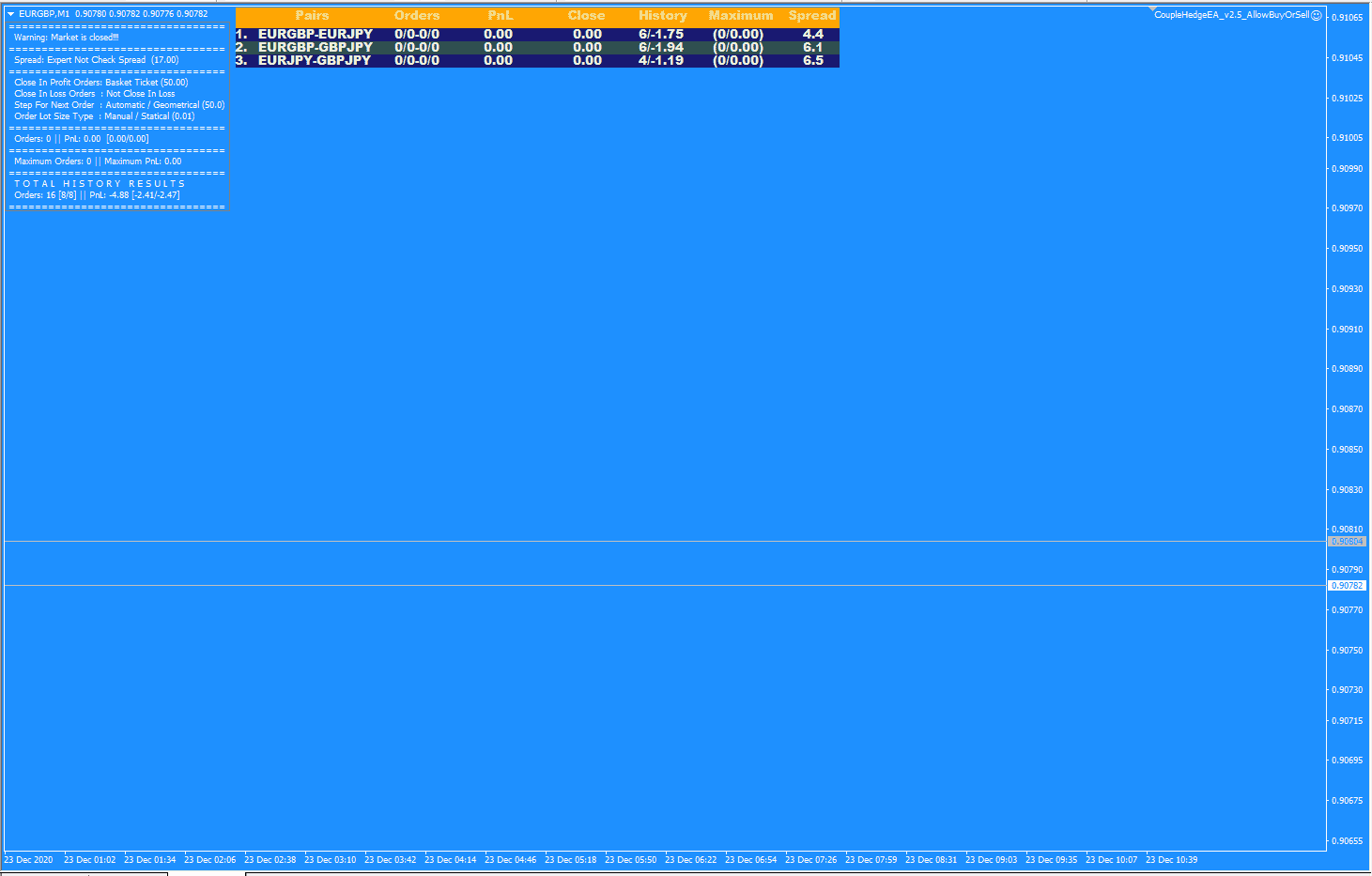 The Couple Hedge Expert Advisor For MT4 is a sophisticated algorithmic trading system designed for MT4 platform. In its current settings, the robot is not yet suitable for use in live trading, the reason being that it will immediately open trades way more than the trader can handle. The robot will open 40 trades on various instruments the moment it is dropped on any chart. This is because the robot is set to run in five currencies by default (i.e., EUR, GBP, USD, CHF and JPY). Matching the five currencies will result to a combination of 10 currency pairs. With each pair having four orders (two buy and two sell trades), the trading account would be filled with 40 live trades at the outset.

Determining the trading performance of the robot cannot be done easily as it is not possible to use it in the strategy tester for back testing and optimization. The robot gets data from various currency pairs to determine trade entry and closure, and the tester is designed to run a program (indicator or expert advisor) on one chart at a time. The only way to determine the profitability of this trading system is through demo trading. It is interesting to note that the robot returns good profit in demo trading at a very short period of time. Longer testing time is needed to gauge the true potential of this hedging system. 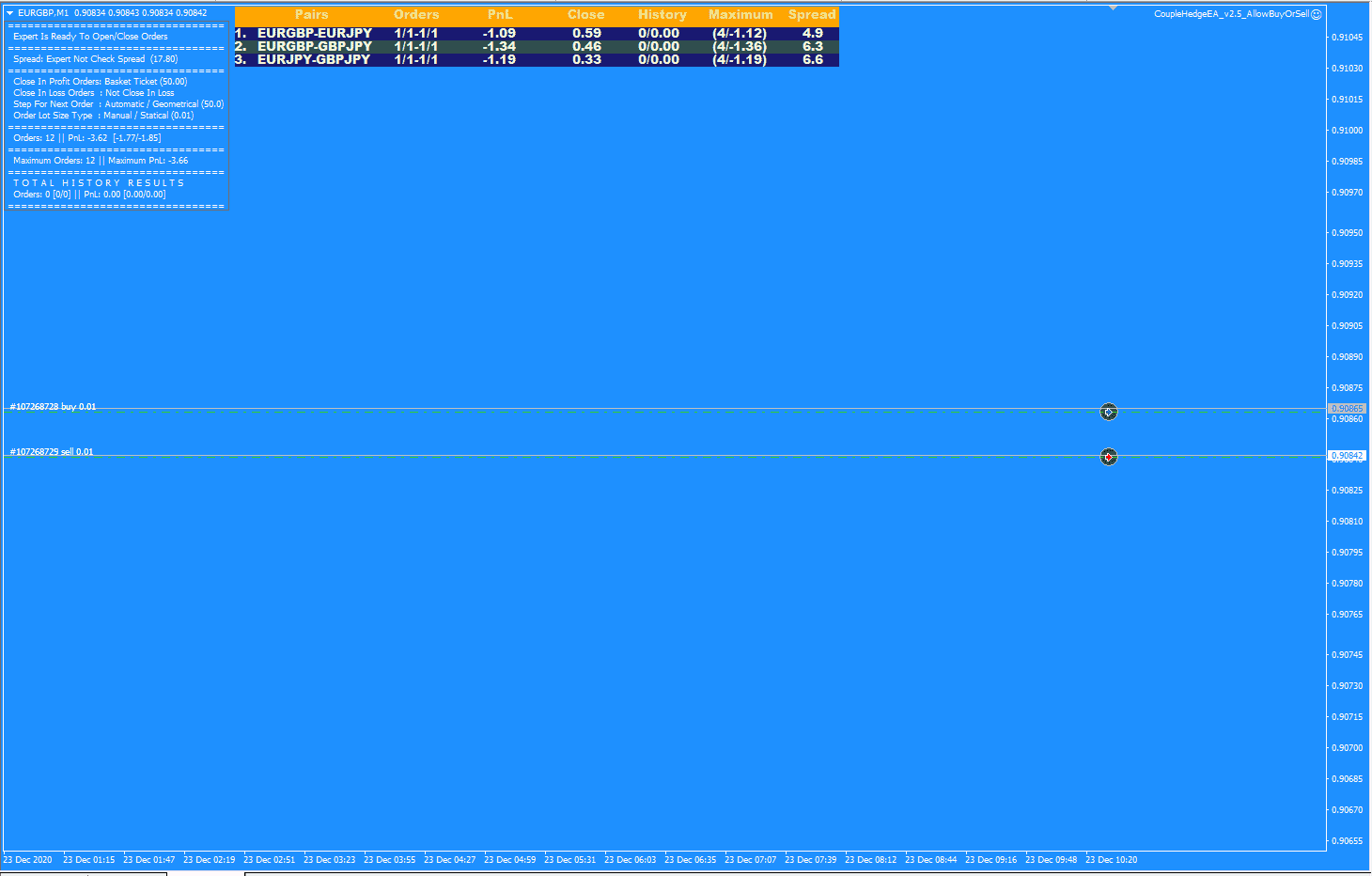 The Couple Hedge Expert Advisor for MT4 performs a lot of calculations in the background before, during and after trade execution. The robot checks the parameters set by the user or the default settings in Inputs and then displays relevant information on the main chart where the robot is attached to. As already mentioned, five currencies are listed in Inputs, but the user has freedom to add other currencies such as NZD, AUD and CAD or remove some currencies listed. The minimum number of currencies required is three. Below this, the robot would not run at all. By default, the lot sizing method used is static, and the initial lot size is 0.01, but there are other options to choose from, namely exponential or geometrical.

The robot controls not only trade management but also everything that happens on the active chart, including chart navigation. After putting the robot on a certain chart symbol, it cannot be run in another symbol, nor it allows the user to put another symbol in place of the current symbol. The user cannot also change the active timeframe to one of his choosing. The robot will bring the chart back to the one-minute timeframe if manually changed when a new tick comes in. These restrictions cannot be violated so long as the robot is running on the terminal.

The algorithmic trading system does not get any signal from technical indicators nor make use of any type of price action strategy to determine the trend bias and time the entry. This system is using purely mathematical calculations in opening and closing trades, and trades will be open on the selected combination of pairs all the time. The fact that the robot hides the candlesticks on the chart suggests that it does not use technical analysis in generating trade signals.

After trades are executed, sooner or later the markets will move in one direction. As this happens, either buy or sell trades will become profitable depending on the price direction. When one type of orders gains 10 pips of profit, one order out of two will be closed. Shortly after, almost concurrently, two additional trades will be taken by the robot, one is a buy and one is a sell. If the market moves down, for example, two buy trades at a higher price remains along with one sell (which is profitable by now) plus the new buy and sell trades. The added buy trade here is almost at the same price as the previously closed sell trade. Live trades are actively managed by the robot in real time from entry to closure.

The robot is not hungry for winning trades though. Not all trades in the history pool are positive. Some of them are negative, but overall, the net result is positive for the trading account. Negative trades are closed to cut the losses early. Looking at the Account History tab in the terminal would reveal that the robot closes trades fairly quickly, and trading profits accumulate very quickly. This makes the robot a good scalping system.

The Couple Hedge Expert Advisor For MT4 – Rooms for Improvement

The Couple Hedge Expert Advisor for MT4 is a very advanced expert advisor, making it not suitable for new traders to use. It requires a lot of screen time to understand how the robot works. Studying the code is another way, but that is a more difficult route to take. The code is just too complicated to decipher even for expert coders.

Similar to martingale systems, this robot can leave market orders open away from the current market price, which will result to drawdowns. For example, when the market heads lower, the first buy trade will be left on the price area where initial trading started. The next sell trade is placed a little lower. After some time, the remaining sell trade will be closed as the market heads further down. At this point only buy trades will remain. Therefore, trades in the current symbol are not hedged. Hedging is applied on the basket of trades opened in the whole trading account.

Selecting the right options can be challenging too as there are too many parameters to take into consideration. It would be helpful if the parameters are explained more clearly in Inputs. At any rate, it is important that users get direction from someone familiar with the inner workings of this robot in order to get value from it.

This robot really lives up to its name. It runs buy and sell trades at the same time and takes two trades for each order type in every symbol. How it operates in the background is an enigma. The basic logic of its design is too deep to understand. It seems only the creator can shed light on this mystery.