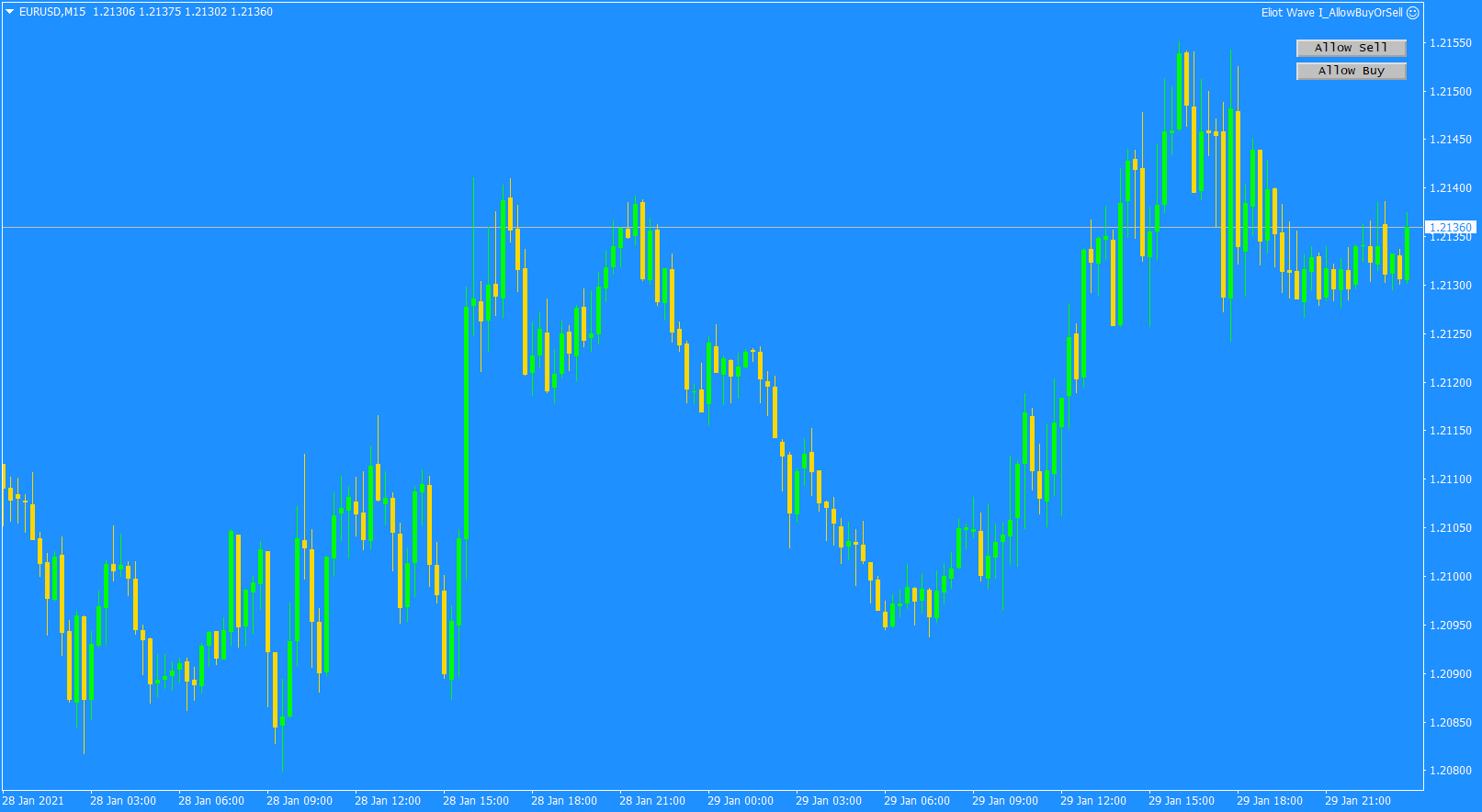 The Elliot Wave I Expert Advisor For MT4 trades any pair of the foreign exchange market using a pair of trend lines and moving averages. The name of the expert advisor might be a misnomer as the robot does not execute trades based on the principle of the famed Elliot Wave Theory. Instead, it uses two trend lines and initiates trades against the direction of the trend lines.

On the other hand, Elliot Wave Theory requires a certain structure to form before entry is considered. This structure is a price movement composed of an impulsive move followed by a corrective move. Normally, the trader enters a position after the correction to trade with the bias of the impulse wave. This type of structure might be intricate to define in the code and might need a lot of computer resources to run.

The Elliot Wave I Expert Advisor for MT4 – Entry Criteria 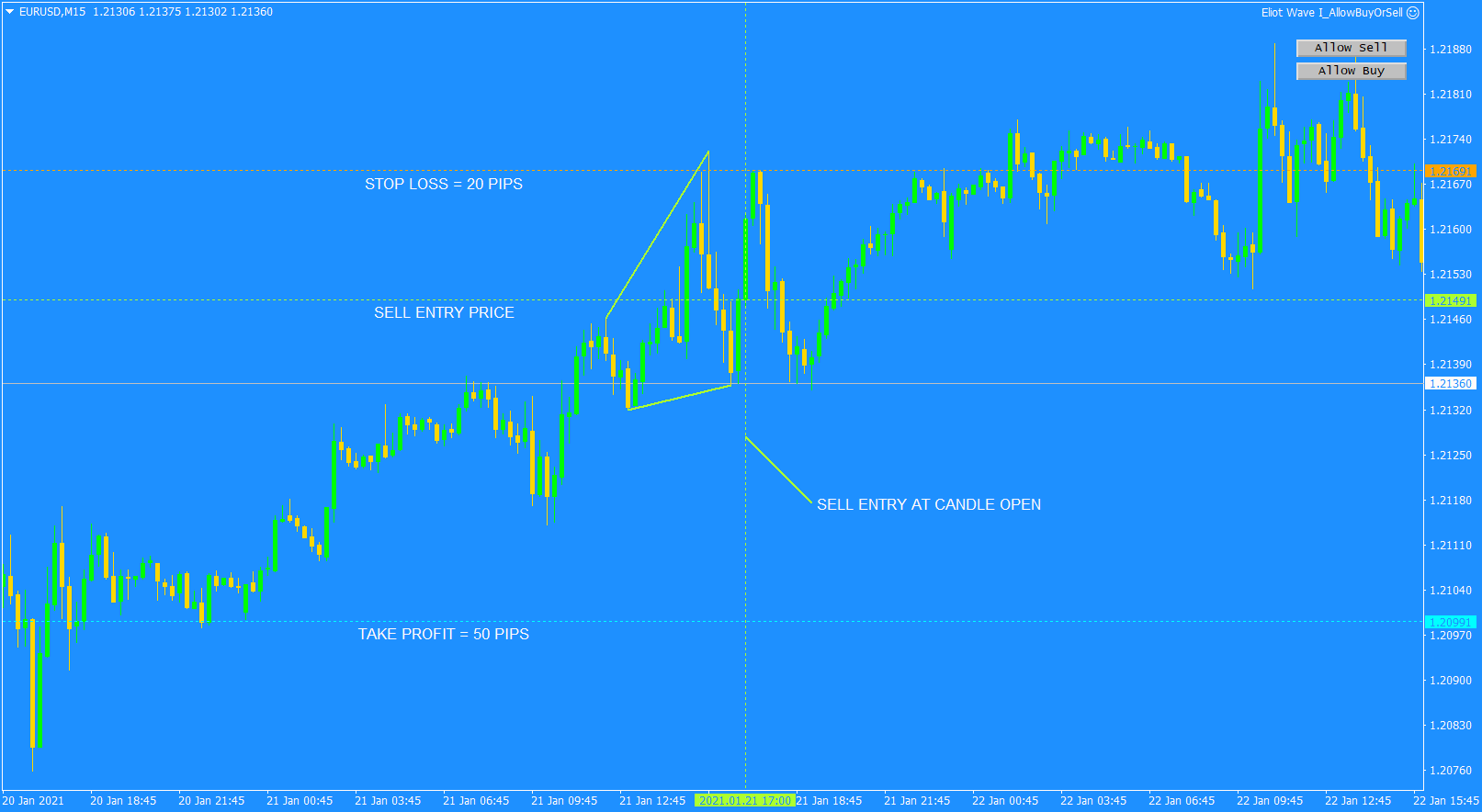 The Elliot Wave I Expert Advisor runs the main trading algorithm at the beginning of a new candle. If the option to move trades to breakeven is enabled, the robot will look at the trades to determine if it is time to adjust the stop loss to the entry price. If the option to trail the stop loss is turned on, the robot will check each trade if it has gained at least 40 pips to begin stop loss adjustment. If there is fewer than 100 bars on the chart or if the take profit is less than 10 pips, the robot exits the main function, waits for a new candle, and then performs another round of checking.

There are a few external variables that the user must be familiar with to control how the expert advisor operates. The most important variables provided in Inputs are outlined below along with the default settings and some explanation:

The trading system makes use of a pair of moving averages and trend lines to determine a trade opportunity and employs the momentum indicator to confirm if the signal is valid. These technical indicators, their parameters, and signal output are explained below:

When the indicators give a concrete signal and the signal is verified, the expert advisor will execute a trade with a trade volume of 0.01. At the same time, during trade execution, the take profit and stop loss values are set in place. While the stop loss is specified as 20 pips, the actual stop loss is augmented by the amount of the spread at the time of entry. Meanwhile, the nominal take profit of 50 pips is reduced by the same amount during entry.

The Elliot Wave I Expert Advisor for MT4 – Exit Criteria

The Elliot Wave I Expert Advisor primarily uses the stop loss and take profit limits to exit the trades. This is a passive approach to trade management. When a trade is winning, though, it is possible to close the trade at a price different from the take profit target. This price can be the entry price, which occurs when the stop loss is moved to breakeven, or another price beyond the entry price, which happens when the trailing stop function is triggered.

The Elliot Wave I Expert Advisor for MT4 – Room for Improvement

As grandiose as the name may be, the Elliot Wave I Expert Advisor failed to deliver the expected results in testing. In this testing, the recent five months of historical data were used. Since the robot started trading late into the testing period, only 1,156 trades were taken, averaging 231 trades per month. Out of these trades, 324 trades ended up winners, putting the win rate to 28 percent, which is on the low side.

There might be other reasons why the robot performed poorly in testing. The equity curve was going down throughout testing, which can give users an idea that the selected entry rules might not be optimal or effective. Another area to investigate to get an insight into the poor performance is maximal drawdown, which is relatively high (i.e., six percent).

As observed during testing, the expert advisor took trades in succession without consideration of the relative distance between trades. This might have caused a string of losses or frequent liquidation of trades in a trade cycle. To improve the trading result, trades must be spaced out effectively or a minimum distance should be defined between trades.