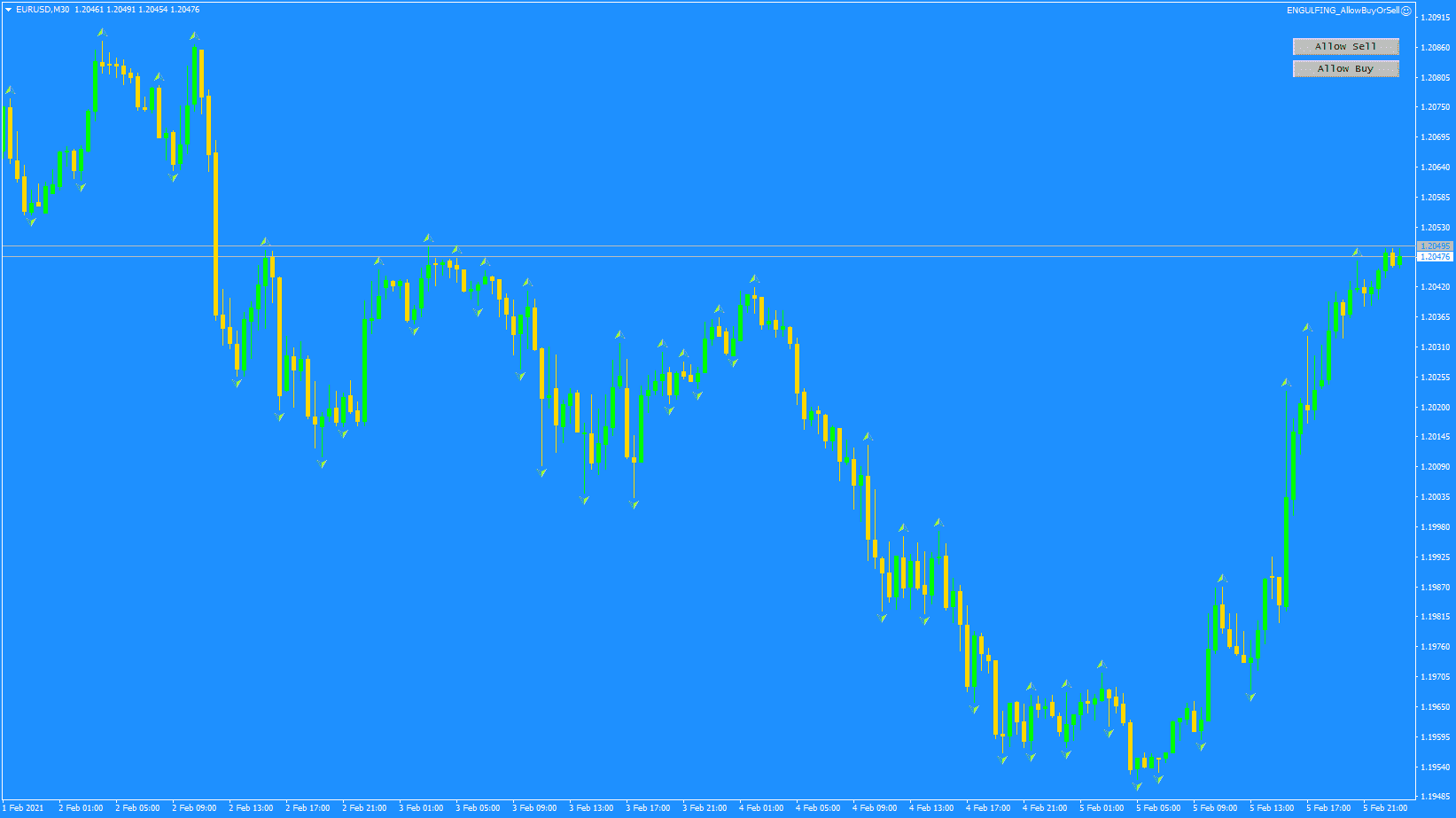 The Engulfing Expert Advisor For MT4 makes use of the engulfing candlestick pattern as the main criteria for trade entry. However, the pattern identification is done on the next higher timeframe, so it is not shown in the above visual. What is displayed above is the up and down fractals, which is another criterion for trend identification. In addition, two other technical indicators are used to define and confirm a trade signal. These indicators will be explained later in this article.

Running the trading system in the strategy tester for a short period of time using historical price data did not return profits for the trading account. It is possible that the symbol and period chosen for testing are not suitable for the trading system, or the market environment was not optimal during the test period. The testing was done on EURUSD 15-minute. To get better or positive results, the user might consider implementing the expert advisor to other symbols and periods, which could be an individual embarkation for each user. 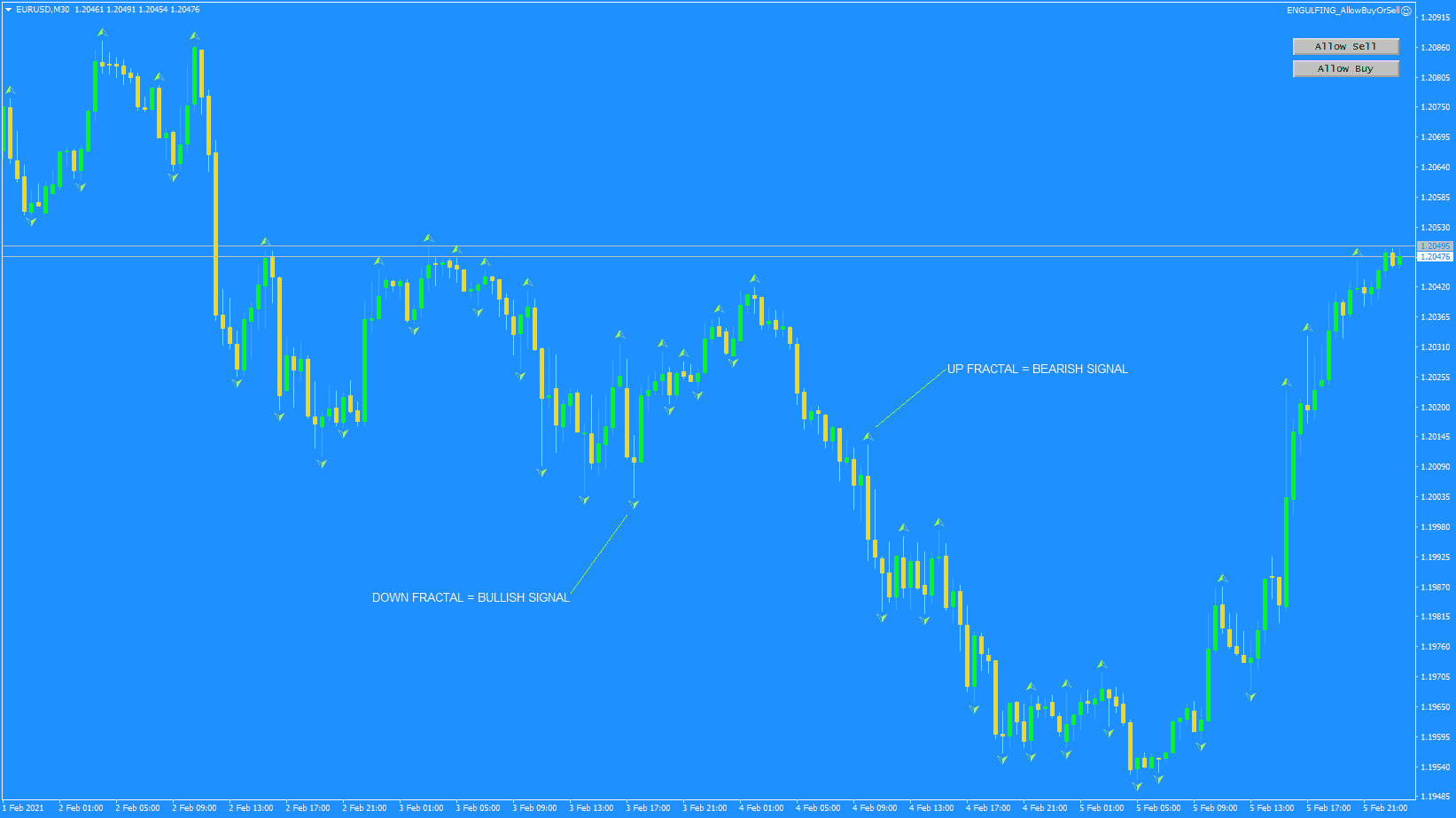 The Engulfing Expert Advisor conducts limited checks prior to trade hunting. It checks first if the current candle has just formed; otherwise, it will exit the main function right away and wait for a new candle to develop on the active period. If a new bar has developed, the expert advisor will compute the overall drawdown if it is still within acceptable limits and then move forward. Then it loops through the trade pool to count the orders and find trades whose stop loss can be moved to breakeven or trailed. If these checks are successful, the robot will refer to the technical tools for direction on trade entry and timing.

This expert advisor offers the trader a few variables in Inputs whose values he can customize to find profitable combinations. The most significant variables are presented below, and an explanation is given to orient the user about the meaning of each value.

The Engulfing Expert Advisor can open multiple trades on the current symbol in one trading cycle. These trades are managed in two ways. If price hits the take profit or stop loss value, the trade concerned is closed in profit or in loss. This is the first method of trade management. The second method is a more active approach and takes effect when a trade reaches a threshold amount of gain (30 pips). At the threshold point, the stop loss is moved to the breakeven price. Beyond that point, the stop loss is continuously modified to lock in more profit.

The Engulfing Expert Advisor For MT4 – Room for Improvement

While not yet profitable in testing, the Engulfing Expert Advisor holds promise as an automated trading system. This opinion is based on estimation of the trading performance in test mode. The equity curve showed that the profit trend was not totally to the downside. There were times when the equity line trended to the upside. This happened when the market condition was trending. In ranging market conditions, the robot failed.

The expert advisor can be improved in many ways. One improvement must be applied to the code. As previously mentioned, the robot can perform 200 iterations until an up or down fractal is come by. In trading, this is not necessary. For example, an up fractal needs two lower highs on the left and the right to form. This means that the robot only needs to know if there is an up or down fractal in candle 3 and then generate a signal. Otherwise, it performs another round of test on the next candle.