Example of A Simple Breakout Expert Advisor For MT4 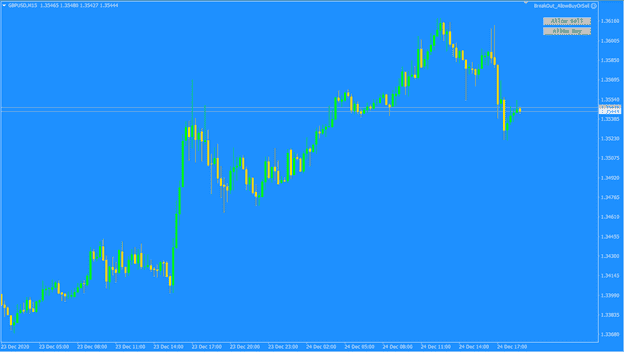 The Example of A Simple Breakout Expert Advisor For MT4 is a simple algorithmic trading system for the MT4 trading platform. As the name suggests, this robot applies the concept of breakout in its trading algorithm. True enough the robot uses the logic of breakout in its simplest form. A bullish breakout is considered to have taken place as the high of the previous candle is taken out, and a bearish breakout is considered to have occurred as price touches the low of the previous candle.

This trading system takes trades only on the current symbol, and it can be applied to any timeframe. It can open trades in trading accounts whose price quotes are given in five or four digits for dollar pairs and in three or two digits for yen pairs. New algorithmic traders can use this robot quickly as there are very few parameters to set in Inputs. However, it is recommended that this robot is run in a demo account first for a good amount of time as the results in the strategy tester do not look inviting at the moment. 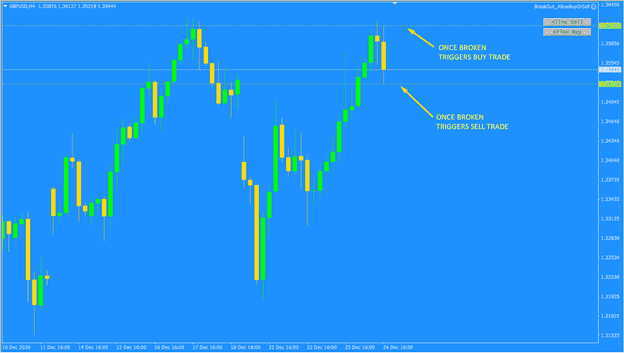 The Example of a Simple Breakout Expert Advisor for MT4 does not perform much routine checks prior to executing trades. When a new quote is received, the robot immediately cycles through the orders in the trade pool to determine if there are open trades in the current symbol. If there is none, the trading system looks for a trade signal.

The robot only executes market orders (buy and sell). It does not use pending orders to enter the market. As the name of the robot suggests, a breakout of some sort will trigger the entry. In this case, a breakout of the previous candle’s high or low is the trade signal. No other confirmation tool such as a battery of technical indicators is being used to validate the trade signal.

Every trade is taken at a lot size of 0.01 as defined in Inputs unless the user adjusts the value manually. The robot does not wait for a new candle to form to initiate trades. Trades are taken in real time as a tick comes in. Upon trade execution, the robot does not attach a stop loss and take profit to the trade. Only one trade is taken at a time, and the trade alternates between two types. If the previous trade is a buy, the next trade is a sell. If the previous trade is a sell, the next trade is a buy.

When the previous trade was closed, the next trade is executed immediately without delay. While this appears to be the case based on the results in the strategy tester, upon inspection it is found that the robot approaches trade entry and exit completely opposite to this observation. In truth the robot consistently looks for an entry in the direction counter to that of the current trade. For example, if the current trade is a buy, the robot will check if a bearish signal exists. If this is true, the current trade is closed at once and a sell trade is taken right away. These two actions happen too quickly that they almost appear to be done at the same time. However, it is not possible for a program to perform two actions at the same time; otherwise, it will break down.

As already mentioned, the Example of a Simple Breakout Expert Advisor for MT4 does not assign stop loss and take profit orders to any trade. Also, break even and trailing stop functions are not available as options for the trader to turn on. Therefore, the only way to close trades is through a direct intervention by the robot itself, so the robot actively manages open trades. As pointed out earlier, the trading system takes an opposite trade signal as trigger to close the current trade. Due to the nature of this trading strategy, market decides the fate of trades very quickly.

The result of testing the Example of a Simple Breakout Expert Advisor for MT4 leaves a lot to be desired. From beginning to end, the equity curve is going downhill. Probably the entry logic is to blame for this bad performance. Taking trades at the break of the high or low of the previous candle is too simplistic an approach to trading. Some other conditions must coexist at same time before a trade is taken. Otherwise, the program will take trades like crazy, which is precisely what happened in this trading system.

Another thing to consider when looking to improve the trading performance of this robot is the timeframe being used. Perhaps results would improve if the program is run in higher timeframes such as the hourly chart or higher. In addition, it may be necessary to run the robot on every new candle rather than by tick. This way false signals are avoided. More often than not, price breaks the previous candle’s range but closes within the range. At other times price breaks both the high and low of the previous candle before picking a direction.

The suggestions presented above might go a long way towards making the robot a profitable trading system. These ideas come about after seeing the trading system in action in the strategy tester. Still the testing result is not representative of the true value of this robot as it is run for a very short period of time. Longer testing time is critical to judge the true worth of this robot.