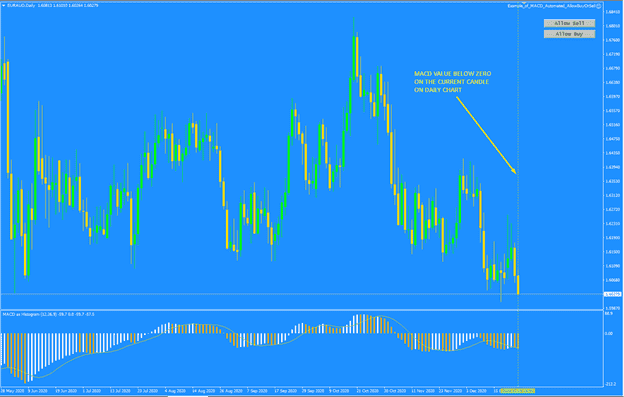 The Example of MACD Automated Expert Advisor For MT4 is a simple automated trading system for the MT4 trading platform. Anyone without trading experience can use it readily by attaching it on any chart in the MT4 client terminal. The MACD robot is a complete trading solution as it handles both trade entry and trade exit.

As trading involves risk and more so with automated trading, the MACD trading system must be run for some time in a demo account prior to implementing it in a real account. This is necessary so that the user is aware of the robot’s pitfalls and strengths. Shortly after, if the result looks good, the trader may consider opening a small live trading account, such as a cent or micro account, to test the MACD system in live market environment. 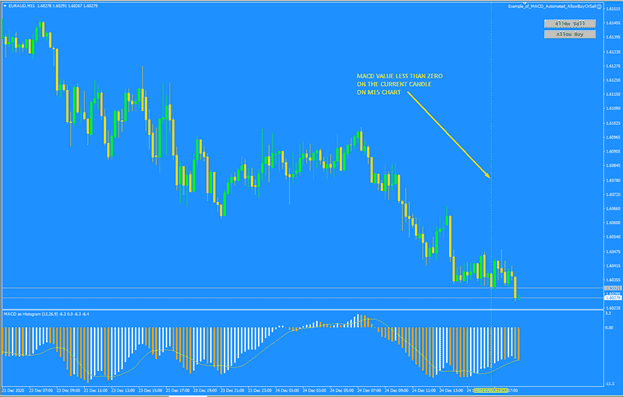 The Example of MACD Automated Expert Advisor for MT4 takes a trade at the open of a new candle. Upon execution, the trade comes with a stop loss of 50 pips and a take profit of 30 pips. With this stop-loss and take-profit relationship, the trading system must have a high win rate in order to succeed.

As mentioned in the foregoing, the expert advisor runs on every tick. If the trading account does not have any open trade in the current symbol, the robot looks to the MACD for trade entry and direction. The MACD indicator settings and the way this indicator is used in this trading system are explained below:

The lot size of a trade is normally the value set by the user in Inputs, but this is not always the case. Sometimes a bigger lot size is being used. The robot utilizes an advanced calculation method to determine the trade volume. First, it cycles through the history pool to count the number of trades taken and closed by the robot. This is largely based on magic number. If the number of closed trades is less than two, the value indicated in Inputs is the lot size used by the robot. If the previously closed trade was a loss, the lot size will be increased depending on the number of consecutive losses encountered.

The Example of MACD Automated Expert Advisor for MT4 takes one trade at a time, and it is not actively involved in managing open trades. As trades have stop loss and take profit orders, the robot lets price decide the fate of every trade. Breakeven and trailing stop functions are not available as options to the trader.

The Example of MACD Automated Expert Advisor for MT4 is best used in trending markets as it adds a new trade in the direction of the previous trade if the previous trade was profitable. When the trend reverses, the new trade is bound to lose. Thus, the user must choose the symbol or symbols on which the robot is applied. In recent history, some markets tend to trend more than they range. Examples include NZDUSD, EURAUD, USDCAD, EURNZD and others. Eyeballing the daily or weekly chart is all it takes to get this information.

The robot’s performance in testing is favorable but not acceptable for live trading. The result is just close to breakeven. At the beginning of testing, the equity curve ebbs and flows with no clear direction. At some point later the equity curve plummeted but not too much to be a cause of concern. Toward the end of testing, the trading system rebounded. This is mostly due to the use of bigger lot sizes for winning trades that recouped the string of losses.

While the lot size increase comes as a saving grace for the MACD trader, the sudden increase in trade volume might be seen by traders and investors as a red flag. The volume increase is just too erratic to be understood. It might have otherwise hurt the trading account very badly had the streak of losses persisted.

Still relying on this testing result is not a good idea. The trading system might just be lucky. Otherwise, the trading account balance had been erased in no time. Therefore, the formula being used in computing the lot size needs a revamp. The trade volume can be increased in the same way as a martingale system does, but the increase should happen gradually.

Heavy reliance on the MACD indicator might not be a good thing. This is only one indicator and it tends to give delayed signals, so it is considered a lagging indicator. Therefore, another technical indicator or methodology should be used as confirmation of the signal given by MACD. This will lead to fewer trades, but the trades thus taken will have more chances of winning than before.