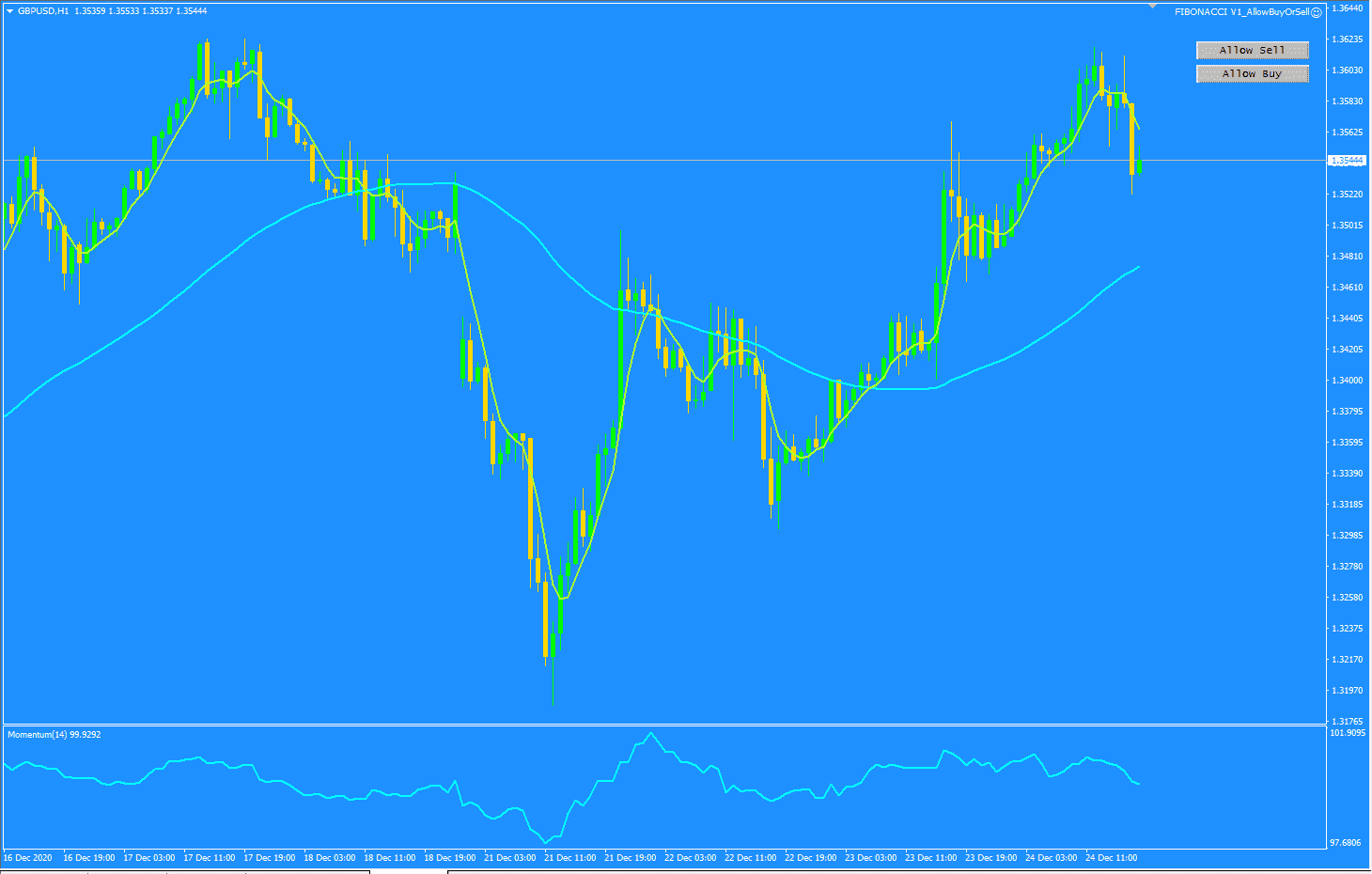 The Fibonacci Expert Advisor For MT4 is a simple algorithmic trading system for MT4 platform. It uses the concept of Fibonacci retracements as a signal to generate trades. This strategy makes the assumption that Fibonacci levels are areas of support and resistance. While these support and resistance areas are not always respected by price, they are still considered as points of interest where traders can look for trade opportunities. With this concept in mind, the Fibonacci robot is designed for trading the pullbacks of newly established trends.

During testing, this trading robot shows an interesting result. While it started very positively, it ended very close to breakeven. The testing done is so limited in time, so it does not represent the true value of this trading system. Anyone interested to know its worth might consider doing testing in multiple instruments and for a lengthier period of time. That is the only way to judge the worth of this trading system, and it might be a personal journey for everyone. 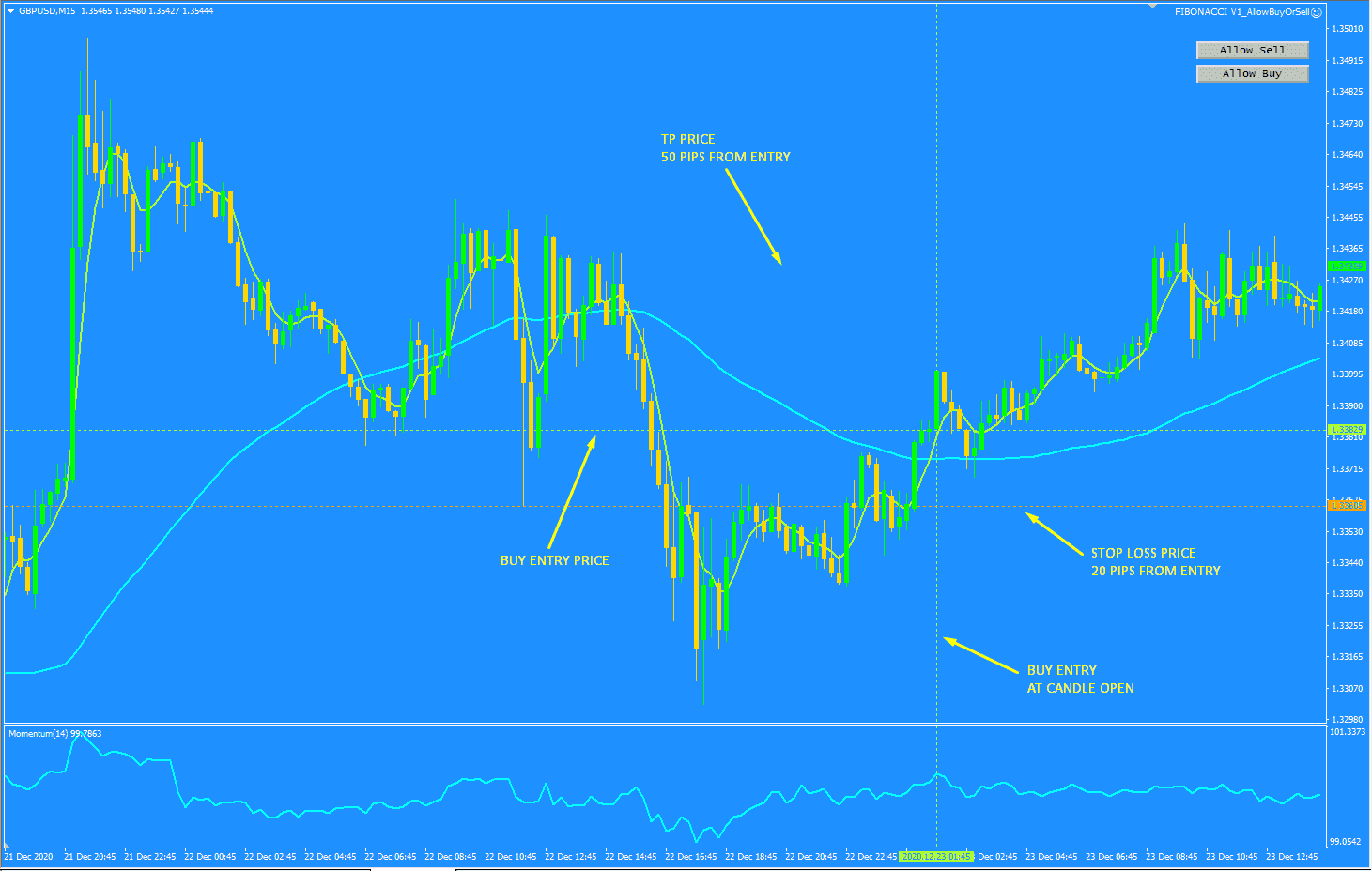 The Fibonacci Expert Advisor for MT4 executes a trade at the open of a new candle, and it can add more trades into the mix later when the entry conditions are met. The total number of trades it can take on the current symbol is 10 by default. If the user intends to trade other currency pairs, the robot must be manually attached on those pairs. The user does not need to modify the magic number indicated in Inputs as the robot manages trades in different symbols separately.

As trades are opened at different times and places, they will have individual stop loss and take profit targets. By design, trades will have a stop loss of 20 pips and a take profit of 50 pips as indicated in Inputs. However, in the real scenario the stop loss increases by the amount of the spread, and the take profit decreases by the same amount. Regardless, the risk-reward ratio is still favorable as it is a little more than two. Without taking the trailing stop function into consideration, this ratio should give the trading system more chances of survival and winning. At least in theory this is to be expected.

The technical indicators used in this trading system and their settings are explained below:

On the higher timeframe, the robot gets the range, from low to high, of the previous candle. Then it divides the range into seven levels, including the high and low points. The levels are 0, 23.6, 38.2, 50, 61.8, 76.4 and 100, which are percentages of the range. If the indicators give a bullish signal, for example, a buy trade can only be taken if the close price of any of the previous three candles – candle 2 is skipped over – is above any of the seven levels.

The Fibonacci Expert Advisor for MT4 offers the user a few options to secure profitable trades by breaking even or trailing the stop. These two options are enabled by default. If an open trade gains at least 30 pips, its stop loss is moved to the entry price for a risk-free trade. Later if the trade gains more pips, the trailing stop function comes in. Trailing stop maintains a distance between market price and trade stop loss of 40 pips. At some point, price will hit either the adjusted stop loss or take profit of 50 pips. In both cases the trade ends up a winner.

Open trades can be closed all at once if the account drawdown reaches a predetermined threshold. This threshold is defined in Inputs and set to one percent of the account balance by default. During testing, equity stop did not happen at all possibly because the stop loss of every trade (20 pips) is very close to the entry price.

The Fibonacci Expert Advisor For MT4 – Room for Improvement

The Fibonacci Expert Advisor for MT4 looks promising in the strategy tester, but it needs further improvement. While taking 10 trades at a time is not a bad thing, these trades tend to congregate in a tight price range, resulting to huge drawdowns and frequent trade liquidation at a loss.

In the strategy tester the Fibonacci robot seems to flourish in trending market conditions but flops in ranging market conditions. Therefore, users are advised to use this trading system in strongly trending currency pairs, such as NZDUSD, USDCAD, EURAUD, etc. Still even markets with strong tendency to trend do not trend all the time. Therefore, entry timing is key to succeed with this trading system.

The testing concluded with a result that is close to breakeven. This result, though, is not representative of the trading system’s performance due to its limited run time. Anyone interested to know the robot’s true potential must consider implementing the robot in a demo account or running parallel tests in various trading instruments to determine which markets would give it more winning chances.