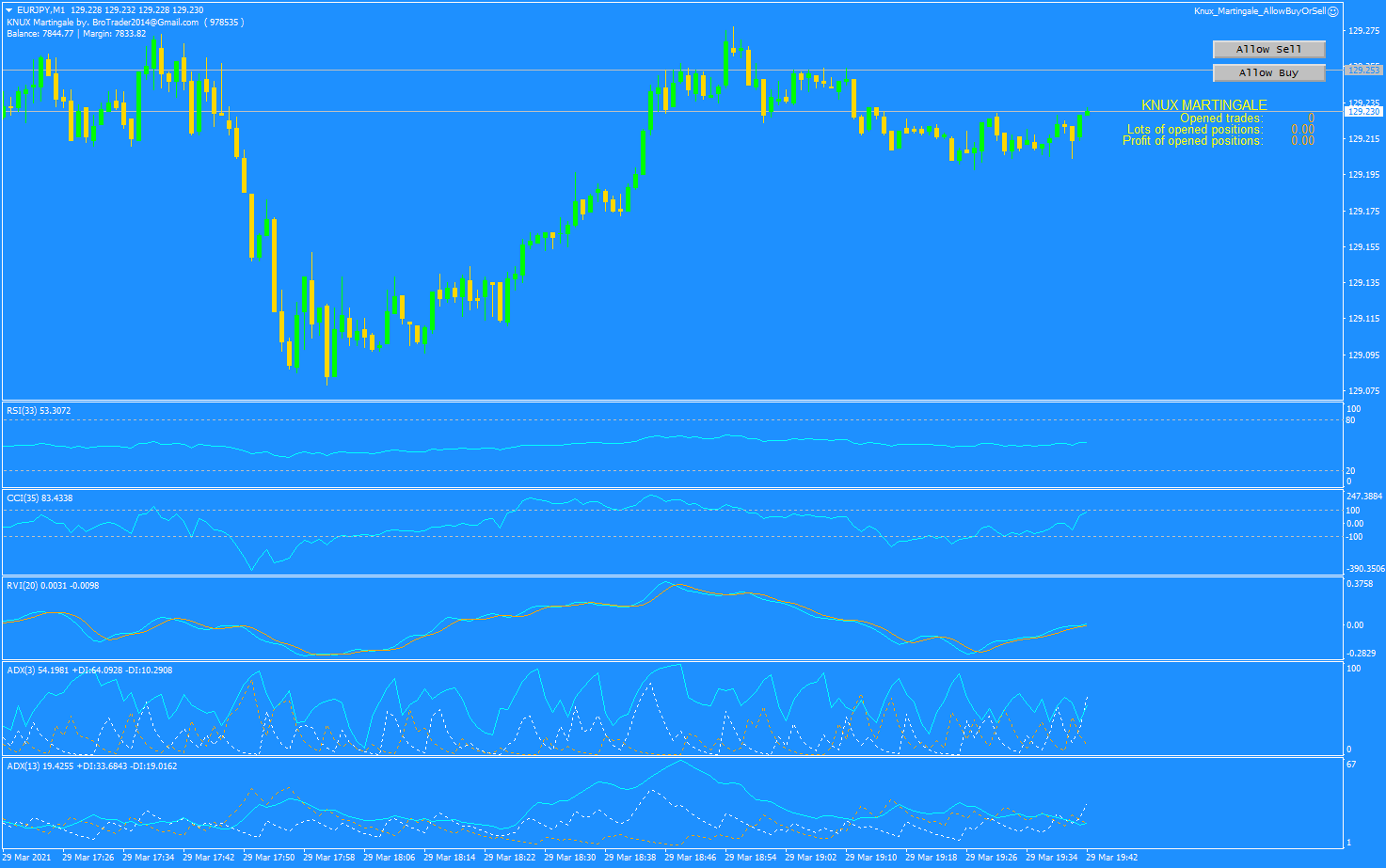 The KNUX Martingale Expert Advisor For MT4 is a relatively complex mechanical trading system due to its use of a number of technical indicators for entry. While it is named as a martingale system, the actual program did not use this money management strategy in testing.

The robot only takes one trade at a time and seldom executes a trade on the current symbol, although it has been run in the one-minute timeframe. The main reason for this is the utilization of a battery of indicators that rarely align with each other.

The expert advisor managed to generate profits when run over five months of test data in one currency pair and one-minute chart. The win rate was 100 percent primarily due to the small profit target and the relatively wide stop loss. It takes time before the robot finds a trade entry, and it requires about the same amount of time to close the trade if the market initially goes against the trade.

When the trade is entered on the correct side of the market, the trade time is too short nonetheless. During testing, only nine trades were opened, which is not enough to judge the profitability of the trading system. 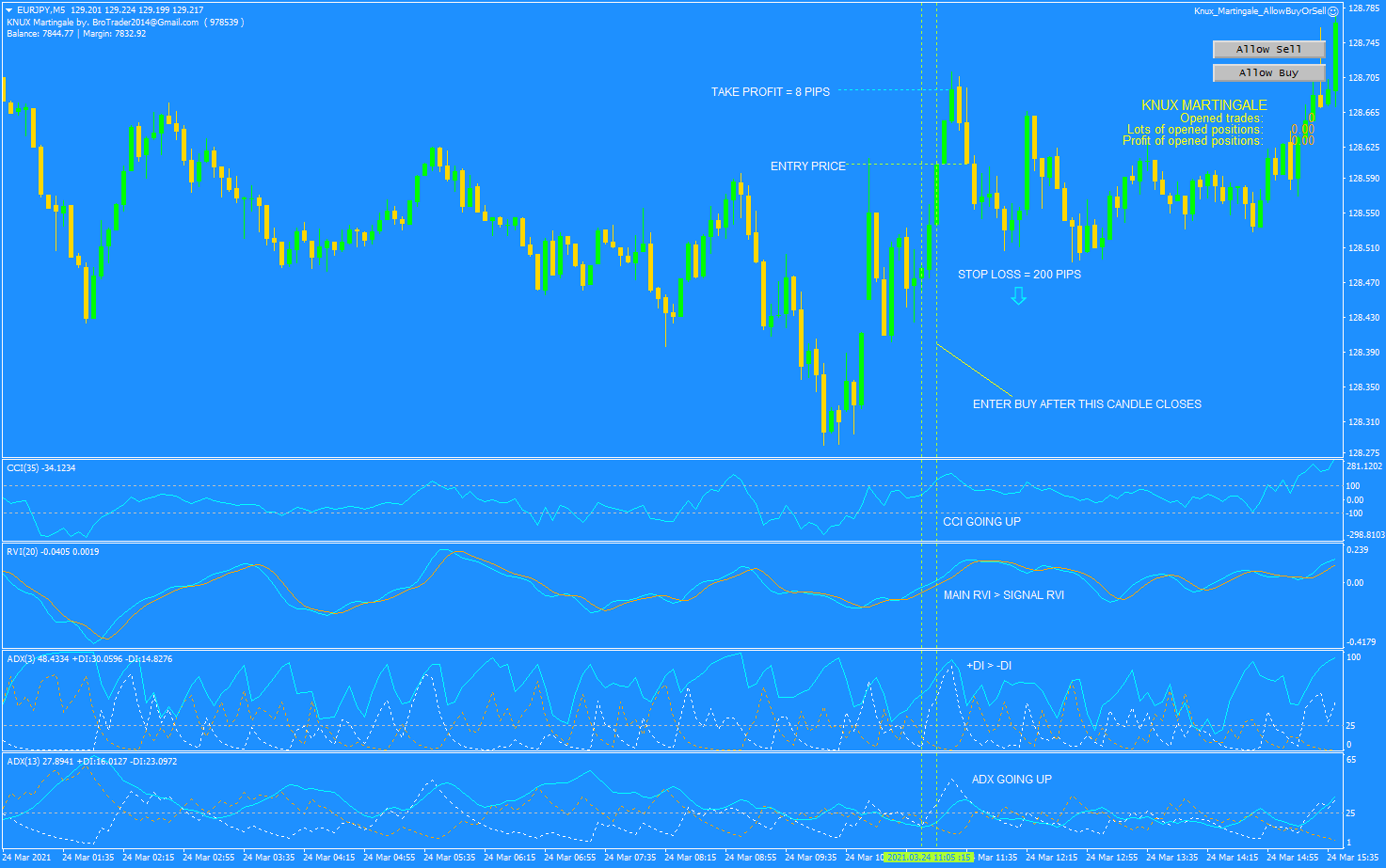 The KNUX Martingale Expert Advisor for MT4 is designed on the principle of accumulating quick, small gains and avoidance of losses. That is why several indicators are used to be able to find the optimal trade entry. The indicators used in this trading system are shown in the above image.

The user is provided with plenty of parameters to use and adjust at will in the expert settings. This gives the user more control to influence the behavior of the trading system according to his trading style and risk tolerance. The most important parameters are listed and explained below to be used as a starting point in learning how to use the expert advisor:

This trading system makes use of several technical indicators to increase the odds of winning and reduce the chances of losing money. As a result, very few trades are taken over a period of time. The indicators used to define a trade opportunity are outlined and explained below:

Several conditions must be satisfied before the expert advisor takes a trade. First, there should not be any open trade in the trading account, not only in the current symbol. This means that no other expert advisor should be running on the same trading account or no manual trade should have been opened. Next, the current ADX should be greater than the ADX of candle two in the current symbol and period. The value of the ADX itself is not taken into consideration.

Once a trade signal has been qualified, a buy or sell market order is executed with a lot size of 0.10 as defined in Inputs. The user can set a lower value if he finds this trade volume too high for the trading account. During entry, the take profit and stop loss of the trade are set in place. While the take profit target is too close to the trade entry (i.e., eight pips), the stop loss limit is set too far away from entry (i.e., 200 pips). The goal is to limit the number of losses and make frequent gains. There can be only one trade open at any single time in the trading account.

The KNUX Martingale Expert Advisor for MT4 relies on the stop loss and take profit to determine the outcome of a trade. However, there is anticipation that the trade is closed in profit than in loss as defined by the relationship of stop loss and take profit. This will be the case most of the time as the take profit is just nearby. However, on few occasions, the user will suffer big losses due to the wide stop loss distance if the chosen direction is wrong.

The KNUX Martingale Expert Advisor for MT4 – Room for Improvement

While the KNUX Martingale Expert Advisor for MT4 returned a profit in testing, the overall trading performance was not satisfactory. Opening only nine trades in five months’ time is not acceptable for serious traders and investors. The profit gained might not be worth the time spent and capital allocated on the trading system.