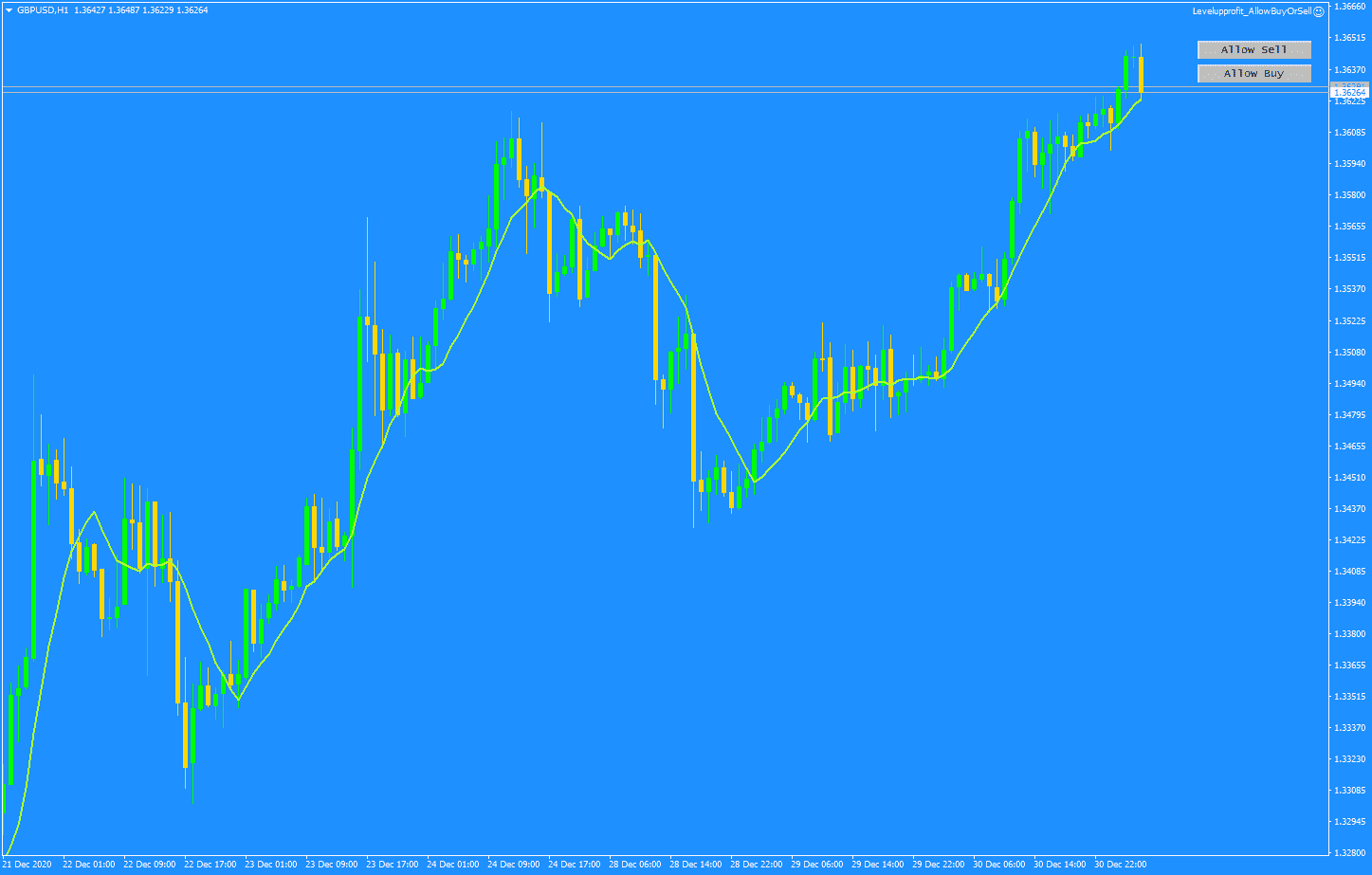 The LevelUprofit Expert Advisor For MT4 is a simple automated trading system for MT4 platform. It uses one technical indicator to determine the trend direction and time the trade entry. This indicator is the moving average, which is widely known as a momentum or trend indicator. As such, this trading system is intended to capitalize on market trends that happen 25 percent of the time on average.

As the moving average is not an effective tool during ranging market conditions, the robot may fail in these conditions. Therefore, the user is advised to take the prevailing market condition into consideration when using the trading system. It is best to implement this robot in trading instruments that tend to trend more than they range to set it up for success from the get-go. Some markets that display strong tendencies to trend lately are NZDUSD, USDCAD and EURAUD, to name only a few. A quick excursion to the daily and weekly charts can help the user find other trending markets.

A short test run shows an unexpected result for this simple expert advisor. While it takes only one type of trade throughout the test run, the robot pulled off an excellent performance in terms of profits while taking only few numbers of trades. The profit factor and expected payoff are quite good, and the win rate is more than 60 percent. The only downside is the maximal drawdown that goes as high as 40 percent. Due to the short duration of this testing, the result cannot speak for the profitability of the trading system. It is possible that the market condition during testing was favorable for the robot so it delivered such great result. Anyone interested to use this expert advisor in trading should do more testing in various trading instruments and timeframes. That is the only way to have confidence that this trading system works when applied in real trading.

The LevelUprofit Expert Advisor for MT4 performs only minimal checks the first time it is dropped on the chart. It does not carry out intricate mathematical computations to get values to be used in trade generation or to be displayed on the chart for the user’s perusal. As such, it be run even in slow computers without affecting performance.

The robot runs on every tick but looks for trade entry only when a new candle has formed. If there are open market orders on the current symbol, the robot turns silent and waits for a new candle before doing another round of trade exploration. However, if there is no open trade on the active chart, the robot looks to the technical indicator for trade signal and direction.

As already mentioned, the expert advisor uses one technical indicator to identify the market bias. How the moving average is used in the trading system is discussed below:

Once the trade direction has been defined and there is no open trade on the current symbol, the robot executes a trade. Only one trade is taken at a time. This trade has a lot size of 1.0, which is quite high for any type of trading account. The robot assigns this trade volume to the trade when it sends a trade request to the trade server. The user cannot change the lot size at his disposal as it is not available as a variable in Inputs to adjust.

The LevelUprofit Expert Advisor for MT4 takes a passive approach in trade management. It allows the market to call the shots without any intervention. If price touches the stop loss, the trade is closed for a loss, and if price hits the take profit objective, the trade is closed in profit. Unlike most other expert advisors, this robot does not use the breakeven and trailing stop functions when managing open trades. These functions are simply not available for the user to switch on and off as desired.

The LevelUprofit Expert Advisor For MT4 – Room for Improvement

The LevelUprofit Expert Advisor for MT4 yields a positive result at the time of testing, which is surprisingly excellent. In this short test run, the robot managed to generate a significant amount of profit in a very short period time and with only few numbers of trades taken. While this performance sounds good at face value, analyzing the trade results in the strategy tester in more depth shows that the testing result is not at all reliable.

During testing, the robot only took buy trades. No single sell trade was ever taken. However, this is not how it is programmed in the code. The robot should take a buy or sell trade depending on the signal given by the interaction of two moving averages. Upon closer look, one moving average is not being used to find the trend. This is the 41-period moving average. The variable holding the information about the 41 SMA is empty because the symbol put inside the iMA function is incorrect. This single program bug caused the robot to fail, though it does not look too obvious to the user. It must be corrected so that the robot can also take sell trades as intended by the creator.

It appears that the program is old and outdated. There is a function in the code that does not serve a purpose, but it remains there anyway. The general coding approach used is not effective. The coder embedded the lot size, stop loss amount and take profit value within the code, making it impossible for the user to adjust these values at will. This coding method prevents the user from doing an effective testing in demo or back testing. One powerful weapon used by developers and traders alike when testing robots is optimization in the strategy tester. Here it cannot be used at all as there are no variables to tweak in Inputs.

The program code must be reviewed first prior to doing any testing so that the user does not waste any time and computer resources. When this is done, the user must embark on long-term testing, preferably with optimization, to come up with sets of options that bring in the most profits. These settings will in turn be used in the strategy tester without optimization to confirm the results obtained. Once testing was able to replicate the result in optimization, then demo trading can commence. Depending on the financial status of the trader or investor, he might consider opening a small trading account with real money to see the robot in action in live market data.