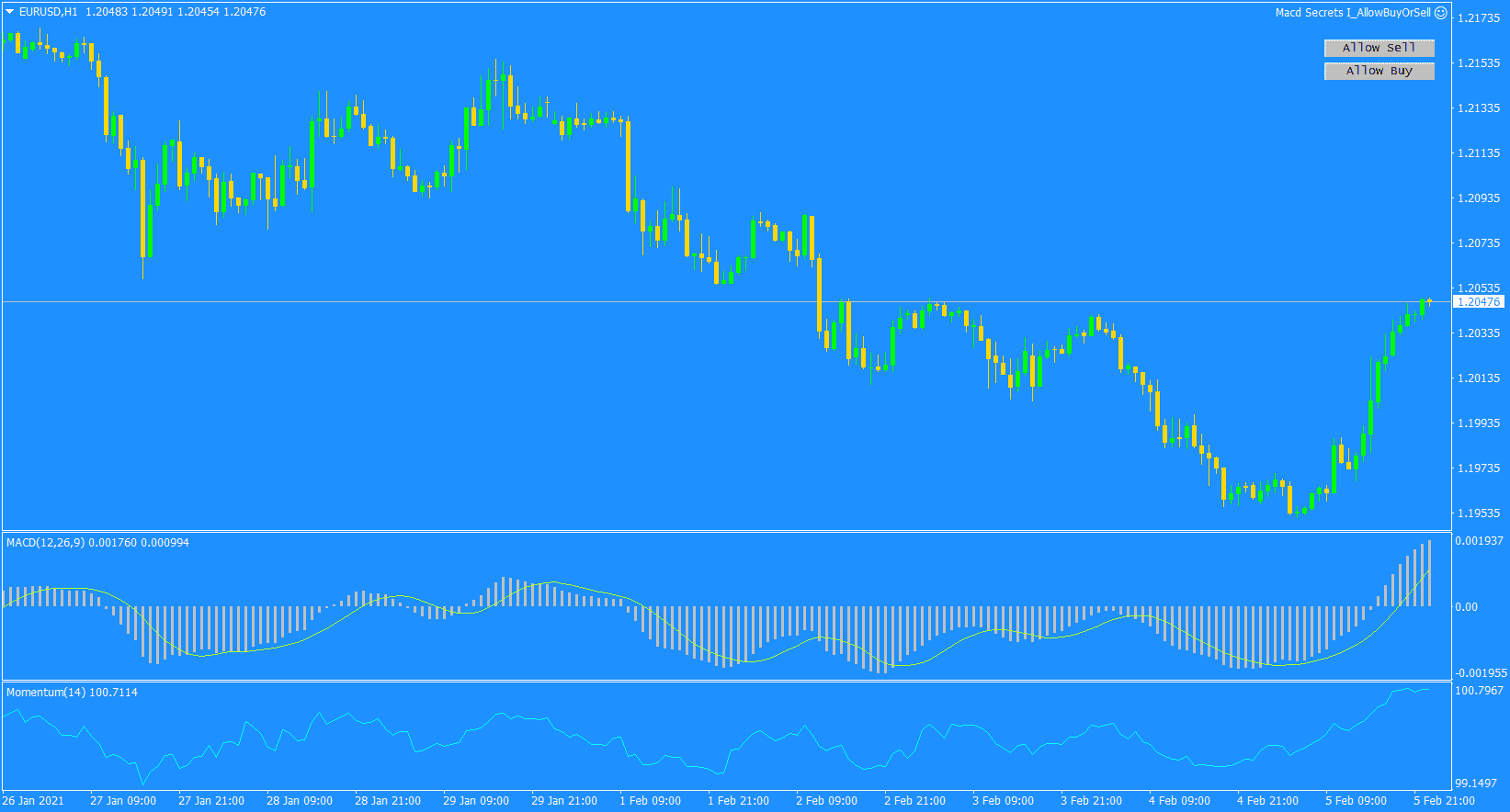 The Macd Secrets Expert Advisor For MT4 employs the well-known MACD indicator to trade the financial markets. The indicator is not alone, though, in this trading system. A set of moving averages is working on the lower timeframe, and the momentum indicator supports the system by measuring the trend strength. While the expert advisor comes with a cool name, it failed to deliver results in testing. Since the test was short in duration, the test result was not enough to judge the efficacy of this trading system. The user can run his own test to negate this initial result. 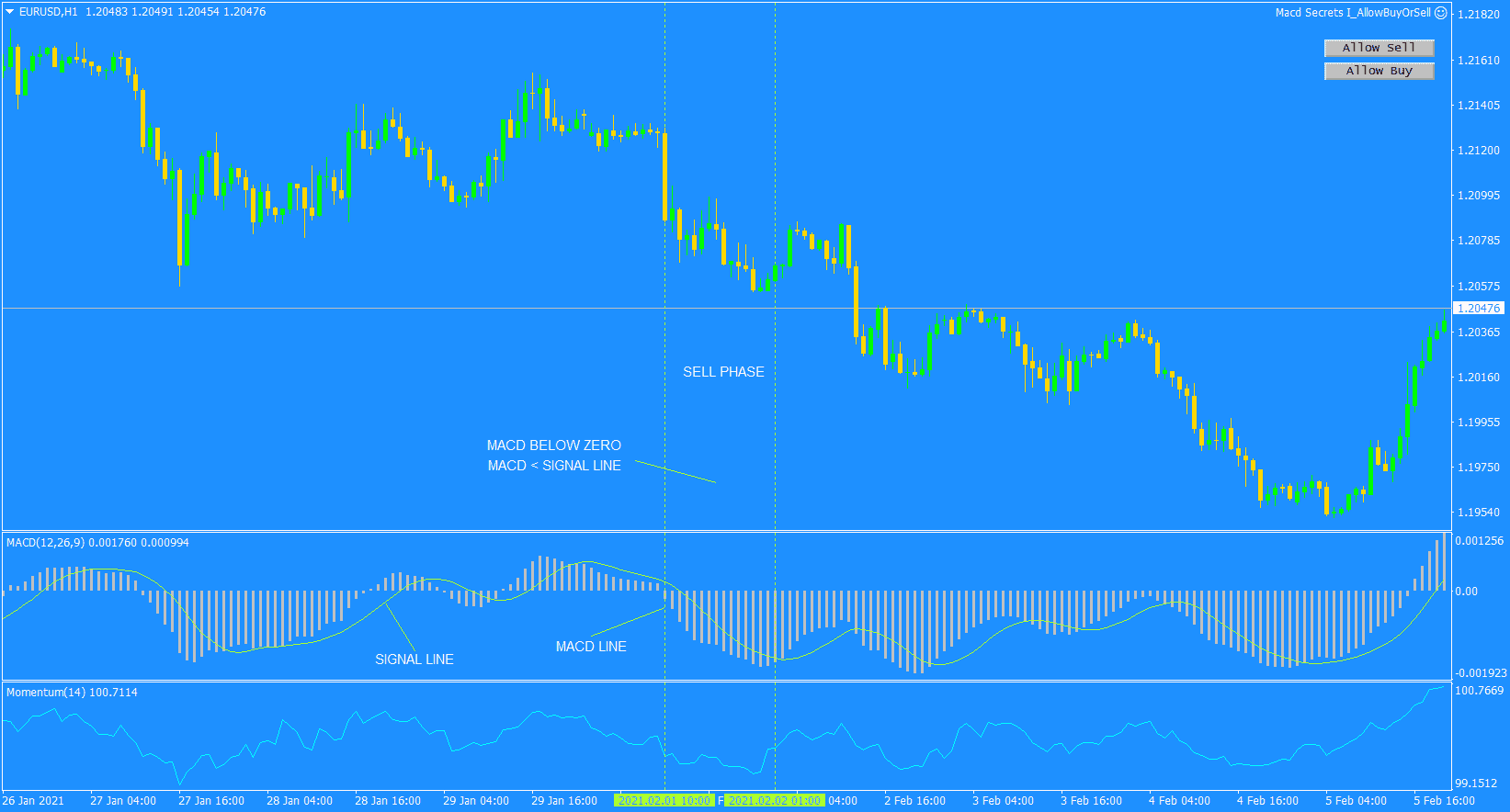 The Macd Secrets Expert Advisor conducts the trade hunting activity once on every candle. If a trade signal exists on a series of candles, the robot can open consecutive trades, one on each candle, until the maximum number is reached. The secret held by this expert advisor may not be hidden at all. In fact, it might be an open knowledge. Possibly, the secret lies in taking a trade when the MACD is bullish or bearish on the current chart and entering such trade against the trend of the lower timeframe.

There are a few parameters in Inputs that the user can play with to find the best combination of settings that work or yield positive results. The most crucial parameters are outlined below along with their default values:


The trading system makes use of a set of technical indicators when looking for trade entry. One indicator detects the trend on the current chart, and another indicator finds counter-trend setups on the lower timeframe. Meanwhile, another indicator confirms if the trade setup is valid for entry. These indicators are discussed below:

When a trade signal has been generated and confirmed, a trade entry will be taken with a trade volume of 0.01 as specified in Inputs. If the user wants, he can set a higher value, but this is not suggested since the robot can open multiple trades. When the trade is executed, the stop loss and take profit are defined. While the stop loss is set at 20 pips in Inputs, the actual stop loss is greater than this by the amount of the spread. Meanwhile, the take profit of 50 pips in Inputs is just a nominal value. The actual take profit is lower by the spread amount.

As defined in the expert settings, the Macd Secrets Expert Advisor can open multiple trades on the current symbol and the maximum limit is 10 trades. While it contains functions for breakeven and stop trailing, trades are mostly closed by the take profit or stop loss in testing. The stop losses of trades are adjusted only occasionally. It is noted that the stop losses of trades of the same type are not modified collectively, only individually, leaving some trades behind when the trend changes or makes a correction.

The Macd Secrets Expert Advisor For MT4 – Room for Improvement

The Macd Secrets Expert Advisor failed to deliver positive results when run using five months of historical data in the strategy tester. This testing was performed on one foreign exchange symbol and one lower timeframe. Judging by the equity curve alone, this trading system is not profitable and far from it. The equity line was going down in a straight line from the beginning and managed to make a small recovery toward the end of testing. The test run ended in a loss for the trading account.

The main reason for this failure in testing is the low win rate, which was only 28 percent. The drawdown is not too bad, however. One contributor for the low winning percentage is the apparent high frequency of trade entries. When the robot started taking trades in the middle of the test period, trades were opened in quick succession and seem to be scattered all over the place. The spacing of trades is not agreeable.

The spacing of trade entries must be improved to revamp the win rate. This can be done by setting a minimum distance at which a trade will be added. Since trades are executed on a new candle, it is normal that trades have larger separation than the minimum distance. This is preferable over having a shorter separation between entries. A grid style of setting the minimum distance is not needed, so does the use of pending orders. Market orders are practically sufficient.

Watching the expert advisor in action in the back tester, one can infer that it is suitable for trending market conditions. In such conditions, the robot can generate a lot of money. When the trend reverses or corrects, it is bound to lose money. Therefore, the traded symbol should be carefully selected by the trader.