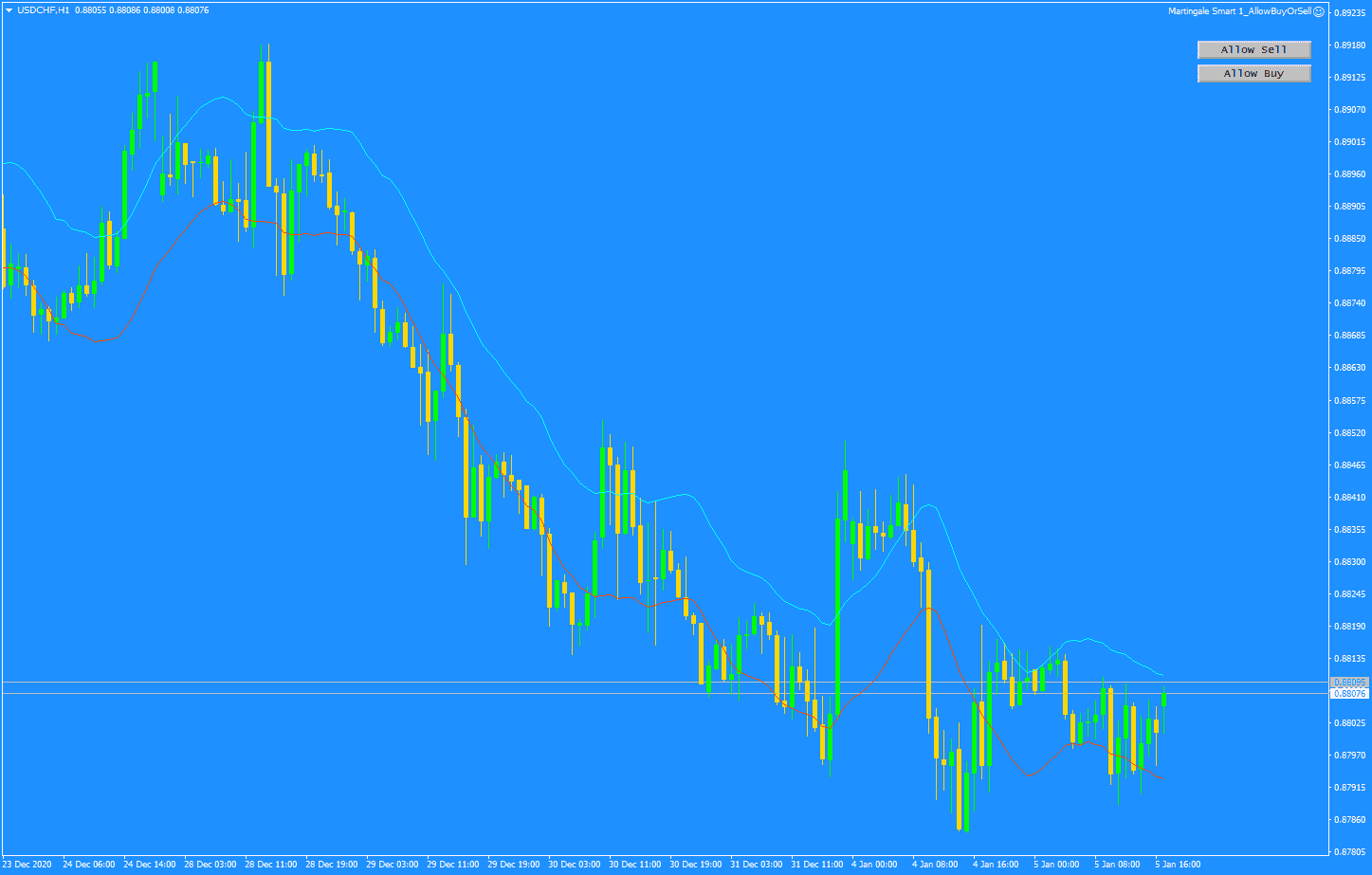 The Martingale Smart Expert Advisor For MT4 is a martingale algorithmic trading system for MT4 platform. Unlike other types of martingale systems, this expert advisor accepts losing trades and attempts to recover the lost amount and gain some profit by doubling the trade volume on the next trade.

Anyone interested to give this robot a try must use it first in a demo account, and only after the robot shows positive results in demo trading should it be used in live trading. A short test run in the strategy tester resulted in a loss, but it cannot speak for the effectiveness of the trading system. It might have happened by chance. To get confidence on this trading system, the user must perform his own testing preferably for a longer period of time. 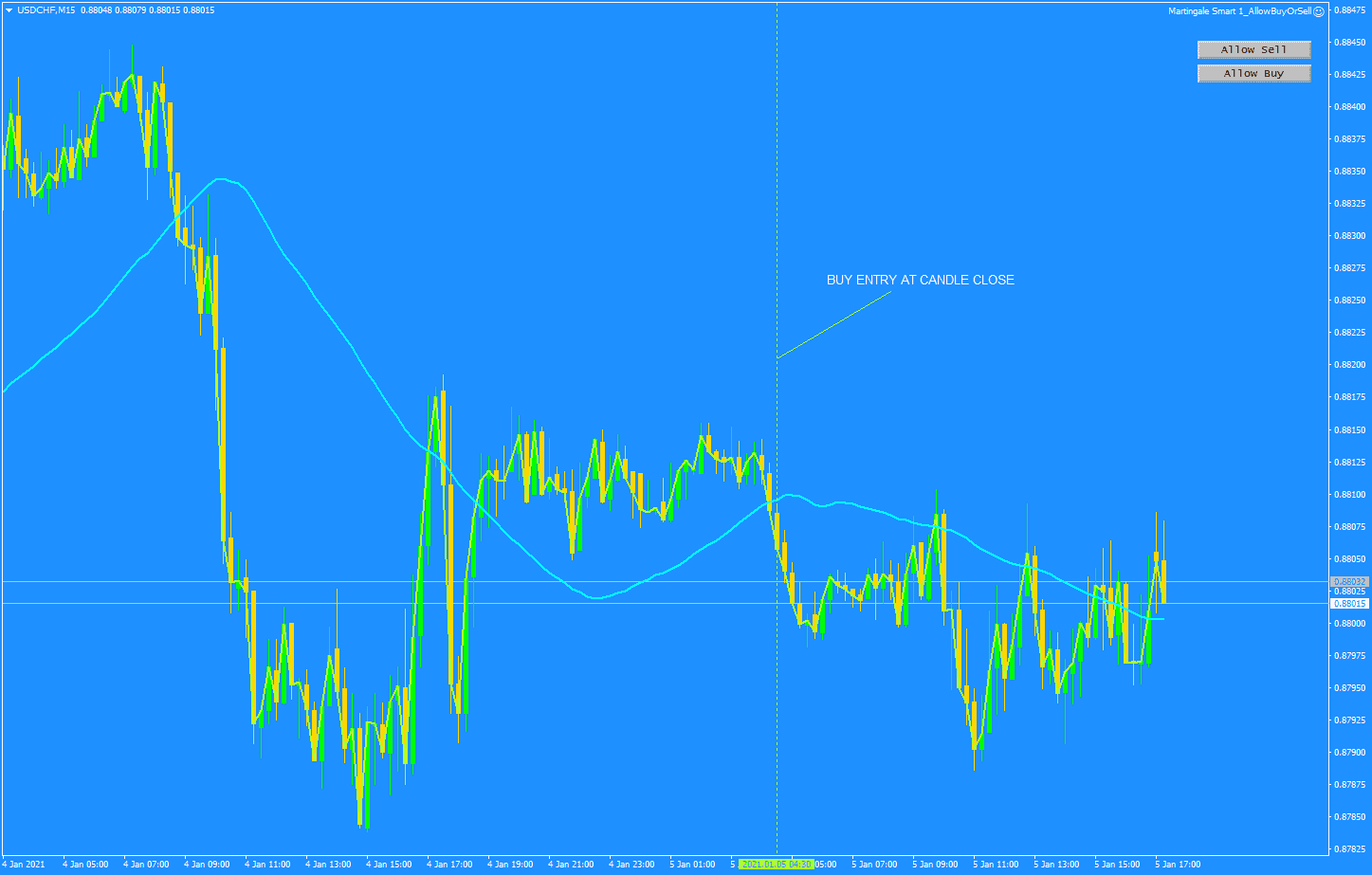 The Martingale Smart Expert Advisor for MT4 looks for trade entry once on every new candle. It does not use pending orders when sending trade requests to the trade server. If a trade opportunity exists, the robot executes a market order right away. Each trade comes with a stop loss and take profit. The default stop loss and take profit are five pips each. However, during trade execution, the robot takes the current spread into consideration.

When the robot sends an order to the trade server, it adds the spread to the stop loss price and subtracts the spread from the take profit price. The result is a skewed risk-reward ratio that is unfavorable for the trader. If a trade happens to be a loser, the trader stands to lose more than if the trade had otherwise won. The trader might consider adjusting the values of the stop loss and take profit to tip the scale in favor of reward.

On most occasions, the Martingale Smart Expert Advisor for MT4 allows the market to decide the outcome of a trade. This is because each trade comes with stop orders for stop loss and take profit. While breakeven and trailing stop functions are available as options to close live trades, it appears these functions are not normally used or triggered. This is due to the proximate distance of the stop loss and take profit orders from the market price. Most of the time, trades are closed by the stop loss or the take profit and no stop loss adjustment took place as observed in the strategy tester.

The Martingale Smart Expert Advisor For MT4 – Room for Improvement

The Martingale Smart Expert Advisor for MT4 appears to be a sophisticated algorithmic trading system when one looks at the code. However, this seeming sophistication does not translate to profitability in this case. A few rounds of testing revealed a disappointing result.

Testing with the default settings showed an equity curve that was going downhill from start to finish. Possibly, the spread was to blame for this poor performance. However, when the current spread was being used, the result was the same. The trading account lost 19 percent after five months of testing, and the maximum drawdown was 19 percent.

However, the win rate was not at all bad. Forty-nine percent of the 5,153 total trades taken were winners. It seems this robot is hungry for trades as it averages 1,000 trades per month for a testing done on the 15-minute chart.

Another round of testing was done to possibly negate the previous result. The default risk-reward ratio might be working against the trading system at the get-go, so it was adjusted in the next testing. Stop loss was maintained at 5 pips (plus the spread), but take profit was increased to two times the spread. Surprisingly enough, the result was not the same, but actually worse. The account lost more money than before (24 percent).

One factor that might have contributed to this poor performance is the way the technical indicators are used to give signals for trade direction. It appears the signals given are counterintuitive. For instance, a buy signal is given when it should have been a sell signal and vice versa. Therefore, anyone with programming knowledge who is interested to revamp the performance of this robot might consider editing the code. If the signals are reversed, the robot might show an entirely different result.

As the equity curve declined continuously during testing, it suggests that the trading system is not yet suitable for any type of trading, even demo trading. The robot must be improved programmatically until it shows a promising result worthy of being put to the test in the strategy tester and later in a demo account. Only after the robot yields a positive result in demo trading after a sufficient amount of time should a trader consider putting money on the line to trade with this robot.