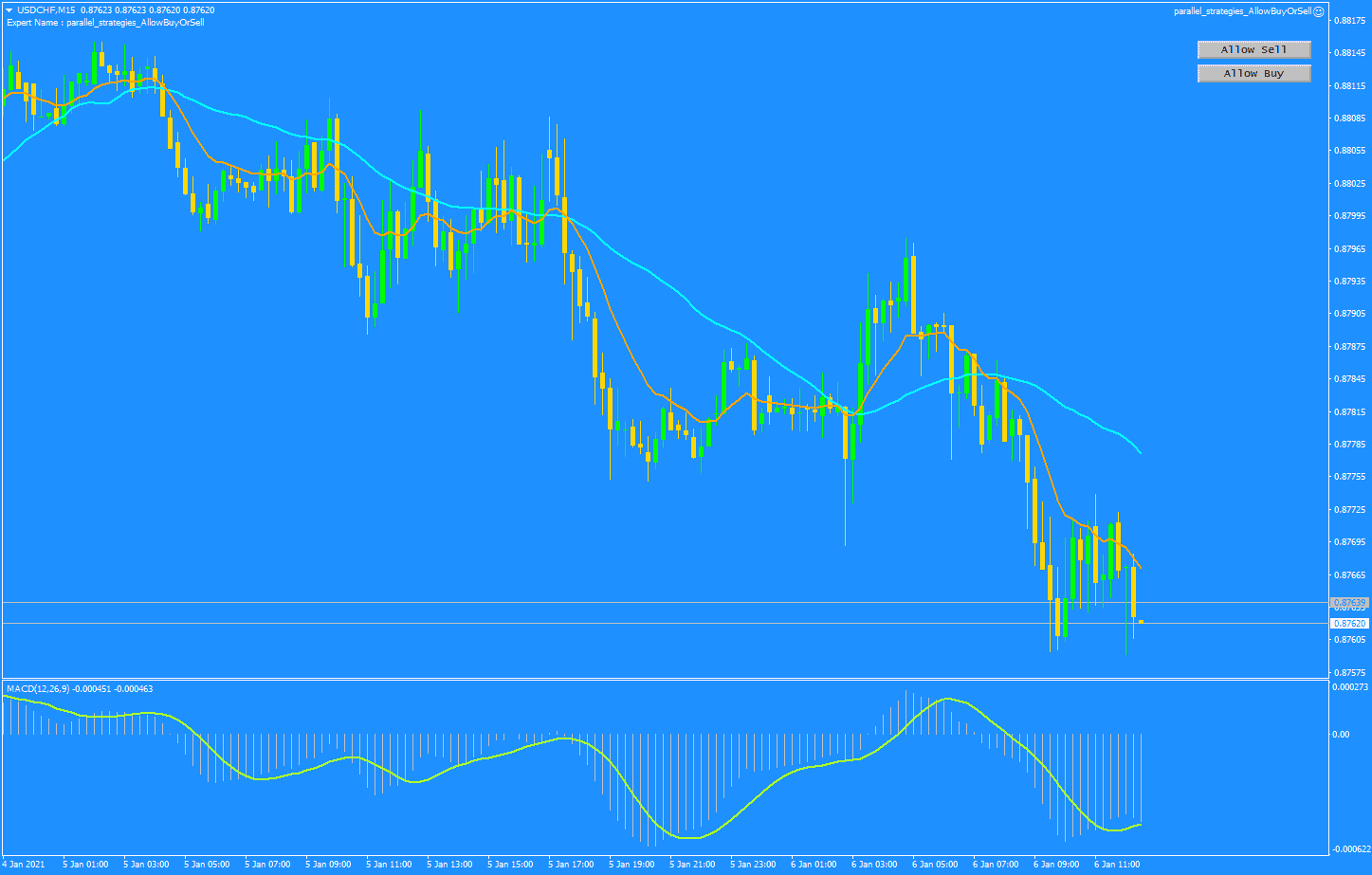 The Parallel Strategies Example Expert Advisor For MT4 is an advanced algorithmic trading system for MT4 platform. Anyone regardless of trading experience can readily use this expert advisor as the default settings work just fine. The robot will run immediately without problems the moment it is dropped on the chart. It will work on any type of trading account (five digit or otherwise), and it can be applied to any timeframe of the current symbol. It will open trades on one symbol only.

While the robot seems sophisticated when one looks at the code, it does not mean it performs well as a trading system. A short testing was done to determine the profitability of this trading system, but the account ended in negative territory at the culmination of testing. This test was not enough, though, to judge the effectiveness of the robot due to its short duration. 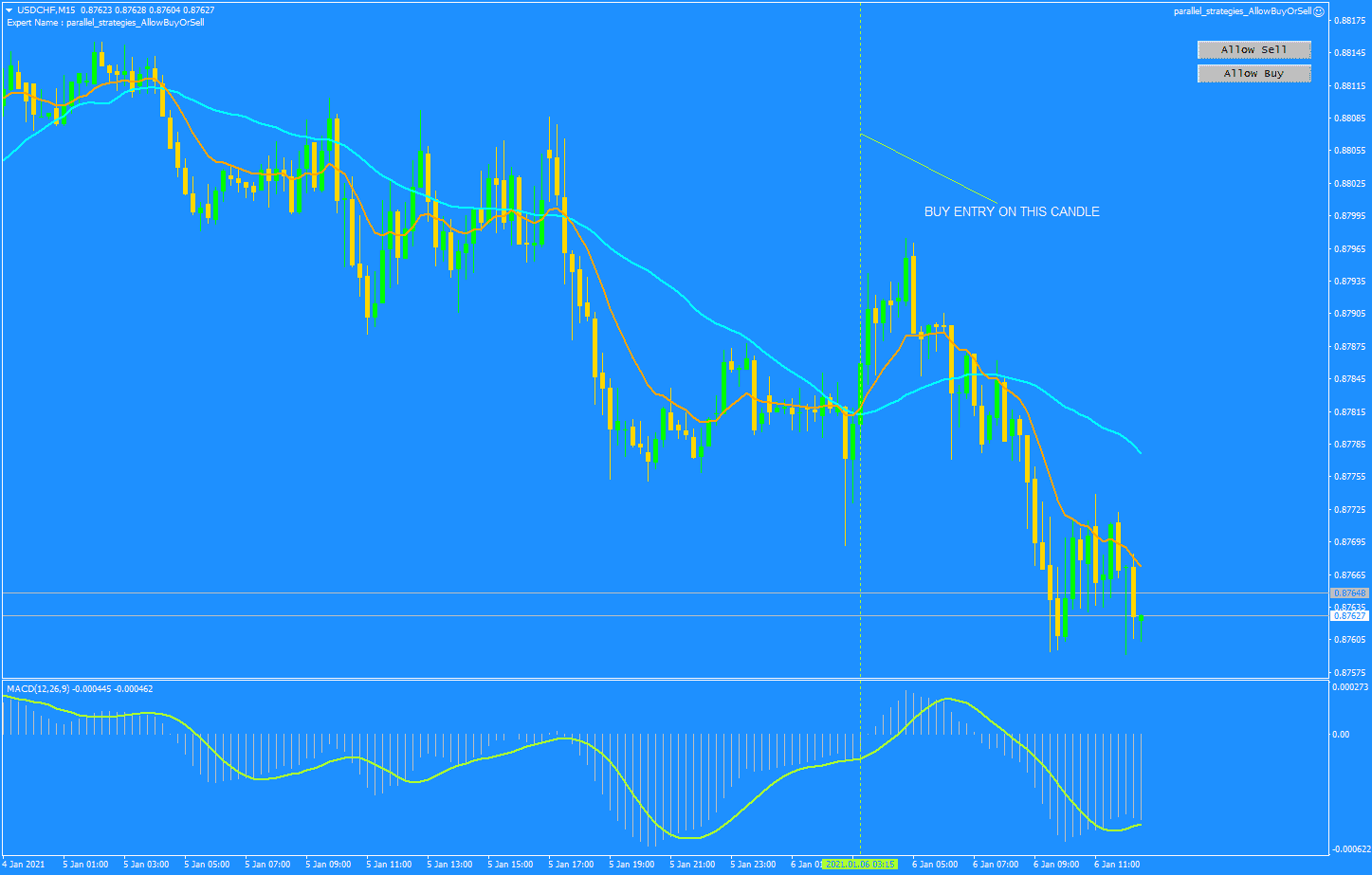 The Parallel Strategies Example Expert Advisor for MT4 puts one market order in the direction of the current trend when the market starts moving. If price is moving up, a buy trade will be placed, and if price is going down, a sell trade will be taken. At the time of trade execution, the trade has no stop loss and take profit. Each trade will have a lot size of 0.01 as defined in Inputs unless the user manually adjusts this value.

The following are the most important parameters that the user can set in Inputs:


This trading system makes use of the moving averages and the MACD as signals for trade entry and trade exit. The settings used and the manner of generating signal are explained below:

The Parallel Strategies Example Expert Advisor for MT4 uses a complex algorithm in managing trades. It can open and manage multiple market orders in the current symbol. If a trade has been opened and is gaining pips, the robot will adjust the stop loss one point beyond the entry price the moment the trade gains at least 10 pips. One point is a tenth of a pip.

The robot adjusts the stop loss price every time the trade gains one point to secure more profits. The expert advisor will maintain a distance of 10 pips between the market price and the stop loss price if the trade is winning. This will continue until price hits the adjusted stop loss level. The robot will not place a take profit target on each trade.

When multiple orders of the same type are opened and these trades start to gain pips, the stop loss of the first trade will be adjusted when it has gained 10 pips. When the succeeding trades also gain 10 pips, their stop loss will be adjusted at the same time to one price only. As it stands, the first trade in the cycle will have the most profit when the trade cycle is completed.

There are times when a trade is closed not at the stop loss price. This happens when the robot forcibly closes the trade perhaps due to a signal provided by the indicators suggesting a shift in market sentiment. If this is the case, the robot would no longer open a new trade in the direction of the previous trade. It stops trading and assumes a waiting mode. It will open a new trade when opportunity is available at the open of a new candle.

When a trade was opened and happened to be against the current momentum, the robot will forcibly close the trade after losing a few pips. The number of pips lost varies. It can be as low as five pips and as high as 20 pips. Shortly thereafter, almost concurrently, a new order in the direction of market momentum will be opened to replace the previous trade. This is to ensure that the account has at least one open order in the direction of the trend.

The Parallel Strategies Example Expert Advisor for MT4 exploits breakouts, and it thrives in those market conditions. During failed breakouts, though, it might experience a couple of losses. When the market is hesitant to trade in any direction, the robot will encounter a string of small losses while waiting for a breakout to occur or a clear trend to form in one direction or the other.

Testing the expert advisor using five months of data resulted to an unsatisfactory performance. The equity curve was going down gradually but steadily with occasional recovery runs. Win rate was low (27 percent), and 3,811 trades were taken for an average of 760 trades per month. The end result is a minimal loss. This kind of testing result illustrates that even if the robot is currently not profitable, it has a potential to become one if something is improved. Obviously, the win rate was low, but the account suffered only a marginal blow even while the robot takes too many trades.

One area to improve on is the spacing of trades. There are times when trades of the same type are bunched closely together in a narrow price area, which can lead to more losses. It is best to add a new trade only when the previous trade has been profitable and the profit is already secured. While this happens very often, sometimes a new trade is added when trailing stop has not yet been activated for the previous trade.