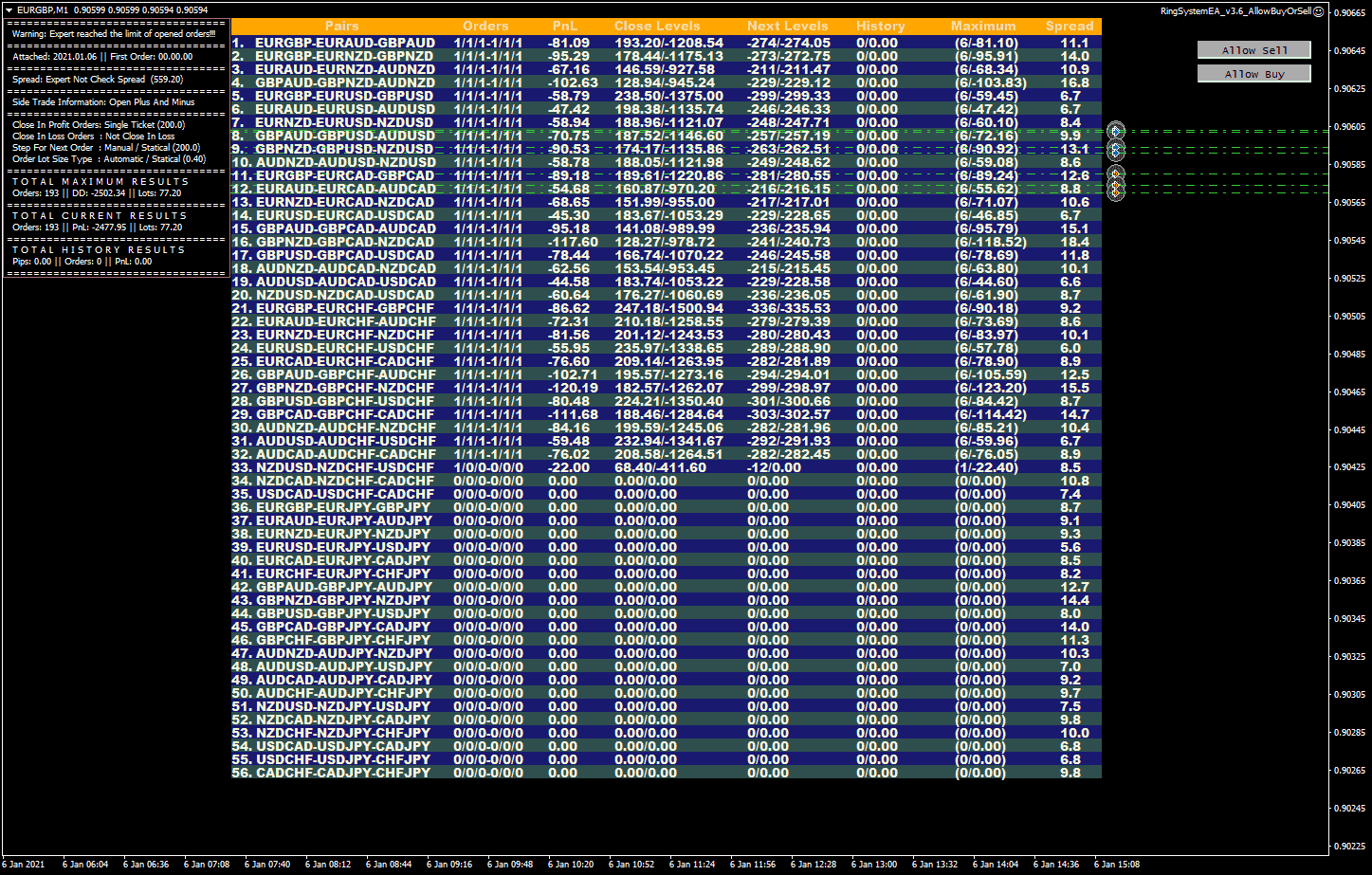 The Ring System Expert Advisor For MT4 is an advanced expert advisor developed for MT4 platform. The robot is applicable for use in brokers offering price quotes in four or five digits for dollar pairs and in two or three digits for yen pairs. Applying one instance of the robot to one symbol will allow it to trade multiple symbols at the same time. Regardless of the timeframe where the robot is attached to, the robot functions in the same way.

This expert advisor should be used by advanced automated trading system users only. Novice and intermediate algorithmic traders might not be able to handle the robot if it opens too many trades on the trading account all at once. Due to its multi-currency scope, the expert advisor cannot be tested reliably in the strategy tester. One can try but will soon find out that the robot trades only the current symbol, and the same set of trades is taken every time. Back testing always leads to account failure. The only way to assess the performance of the robot is through demo trading, and the user needs ample time to understand how the robot performs and to see if it generates profits and by how much.

The Ring System Expert Advisor performs initial checks before opening trades. It reads the risk factor, magic number, maximum orders, slippage and spread, among others to prevent possible runtime errors in case the user supplies negative values or other values beyond the normal range. Then the expert advisor checks the number of currencies set by the user in Inputs. The default number of currencies is eight, representing the major currencies, namely EUR, GBP, AUD, NZD, USD, CAD, CHF and JPY.

Based on the currencies selected by the user, the expert advisor will determine the number of currency pairs to trade. In demo trading using default settings, the moment the robot is dropped on the chart, it immediately opened 112 trades. Approximately 10 trades are opened in each symbol. Here are the most important parameters that the user can set to define the function of the robot:


The expert advisor does not use any technical indicators to determine the trade direction and time the entry. It relies on the principle of hedging to keep the risk under control and make money. Hedging is done using a basket of trades. However, if the default risk factor of 5 is used, the account will experience heavy drawdown immediately after running the trading robot. That is why it is important that the user sets a smaller risk factor or consider using a fixed lot size.

A short demo trading is done to understand how the robot works. In this testing, three currencies are selected (EUR, GBP and AUD), and the default lot size (0.01) was used. The moment the robot is applied to the chart, six trades are immediately opened: two EURGBP, two EURAUD and two GBPAUD. Each pair has one buy trade and one sell trade, and the trades have no stop loss and take profit.

The expert advisor controls everything in the client terminal, from entering and closing trades to chart navigation. The active symbol cannot be changed to another, and it is not possible to change timeframes. The expert advisor will remain or return to the one-minute chart of the current symbol.

The robot also displays a comment on the chart so that the user is updated of the performance of the trades and the trading system. This comment contains information about the settings currently in place, number of orders, current drawdown, and total lots for the open orders as well as the number of pips gained or lost, number of closed trades, and the total profit or loss for closed trades. This allows the user to see the trading results in real time and in one location.

Exit Criteria for the Ring System Expert Advisor For MT4

The Ring System Expert Advisor uses a complex algorithm in closing trades. As a multi-currency expert advisor, it closes open trades in all symbols by the order type when a certain condition is met. Buy trades and sell trades are closed separately. The basket of trades can be closed in profit or in loss.

In case the basket of trades is losing, the robot will get the threshold drawdown level to close trades by determining the total amount of trade volume, dividing the result by the total number of open trades, and then multiplying the result by 1,000 (for 1,000 pips) and by the tick values. If the current drawdown of all buy trades, for example, including swaps and commissions, goes below the threshold level, all buy trades will be closed at once in loss. The same process holds for closing losing sell trades.

The Ring System Expert Advisor – Areas to Improve On

There was not enough time to do testing in demo trading to measure the performance of the Ring System Expert Advisor for Metatrader4. Doing so would take a lot of time. It is up to the individual trader to do testing in demo account to find out the profitability of this trading system. The program developer did a good job of creating a trading system that is so complex that even an advanced coder would have a hard time deciphering the code.

One thing that can be improved in this trading system to control the drawdown is to limit the number of orders that will be opened when several currencies are selected for trading. Having 10 trades open in each symbol at one time is just too much to handle. It might be possible to have two trades per symbol (one buy and one sell) to implement the hedging strategy. Also, the default five percent risk factor might be too demanding to a trading account. When these improvements are implemented, drawdown might become manageable.