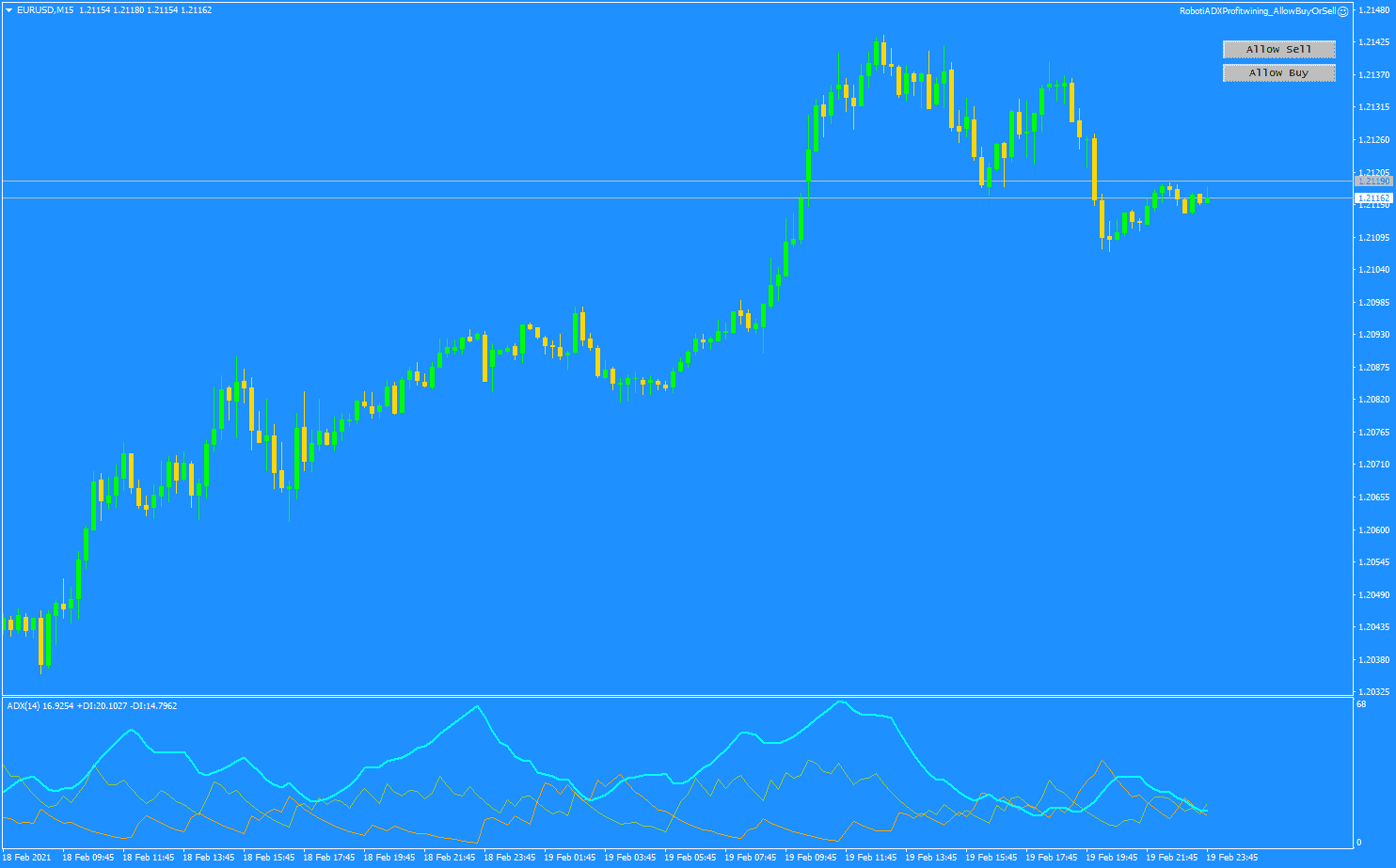 The RobotiADXwining Expert Advisor For MT4 uses the average directional movement index (ADX) indicator alone to enter and exit the market. As shown in the image above, the ADX is applied to the current timeframe and symbol. The only values needed for entry and exit are the plus DI and minus DI. Their relative placement on the current candle defines the signal for entry or exit. While the name of the expert advisor exudes positivity, the testing result gave a negative impression. The profitability of this expert advisor has yet to be seen. 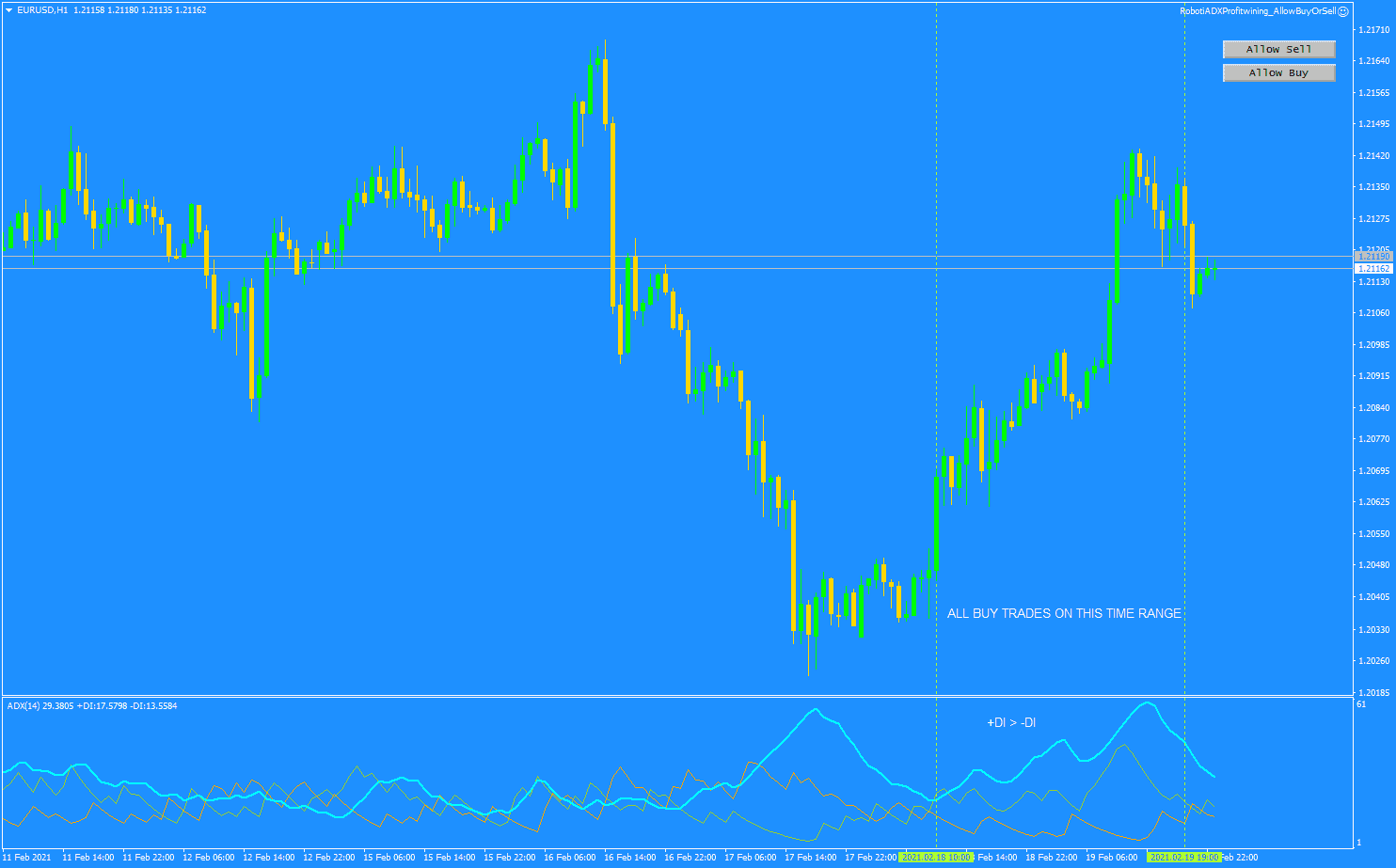 The RobotiADXwining Expert Advisor shows a comment on the upper-left portion of the main window to make users aware of its presence. The only information relevant to trading is the server time. On every new candle, the robot attempts to find a trade entry. Once an order has been executed, the robot will stop looking for new trades.

The expert advisor shows a long list of variables in Inputs that the user can adjust at will. To get a sense of how the robot works, the user can use the default settings at first, and then make adjustments later. Out of the many available parameters, the following variables are selected and listed below to provide the user with a starting point on what to learn about this trading system.

The expert advisor uses only one technical indicator for trade entry, and this indicator is familiar to most traders. How the indicator is used to generate a signal for entry is discussed below:

When a trade opportunity presents itself, the expert advisor executes a trade immediately. This trade comes with a lot size that is defined by the robot. The user is not given a choice to set the trade volume. As noted in testing, this trade does not have a stop loss and a take profit, and it is opened at the beginning of a new candle.

Because the RobotiADXwining Expert Advisor does not set the stop loss and take profit of trade entries, it actively manages the trades from entry to exit. A trade is closed directly by the robot when an opposite signal has been found. For example, if the current trade is a buy and a sell signal is received, the expert advisor immediately closes the trade. This manner of trade exit is applied only to losing trades. Trades are closed at the open of a new candle.

In the case of winning trades, trade management is done using breakeven and trailing functions. When a trade has gained at least 30 pips at the open of a new candle, the stop loss of the trade is immediately adjusted to seven pips beyond the breakeven price, but this is only a one-time event. Thereafter, stop loss adjustment occurs when a new candle opens beyond the open price of the previous candle that triggered the breakeven trade. The distance between the new stop loss and the market price must be at least 30 pips so that the trade is trailed. This continues until the newly adjusted stop loss is hit. Since there is no take profit to each trade, the only way to close winning trades is by the stop loss.

The RobotiADXwining Expert Advisor For MT4 – Room for Improvement

The RobotiADXwining Expert Advisor failed to make money for the trading account in testing. This is largely because of the low win rate (around 22 percent only). This is aggravated by the fact that breakeven and trailing functions are also utilized to close trades. To compensate for the low win percentage, a high risk-reward ratio should be sought, hopefully without the use of stop trailing and breakeven.