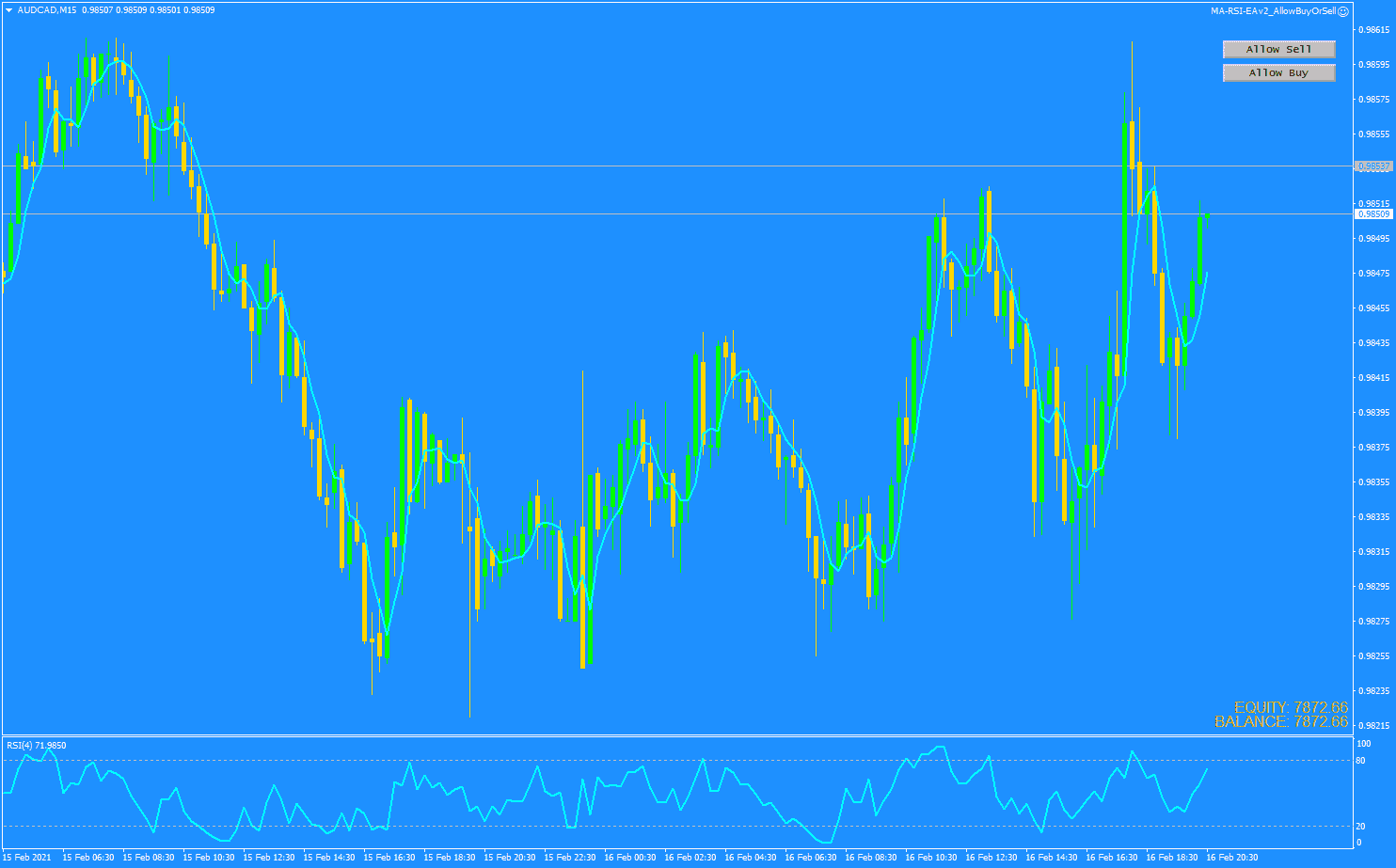 The RSI MA Expert Advisor For MT4 utilizes the relative strength index and moving average indicators as alternative methods for entry. The primary method of entry is the use of the net profit between buy trades and sell trades as well as the overall profit. If the overall profit is negative and one side has more profit than the other, the robot will add trades to the more profitable side. If this scenario does not exist, the robot refers to the technical indicators for direction about trade entry.

This trading system failed in the initial test. Throughout testing using five months of historical price data, the robot opened a total of 200 trades, and not one of them was closed during testing. All trades were forcibly closed by the strategy tester at the culmination of testing. This type of trading strategy is not only a waste of time and money for the trader but also extremely dangerous. When trades are not closed more frequently, capital is not making money for the trader or investor with the passage of time. At the same time, having 200 open trades in one trading account raises a concern about account security. 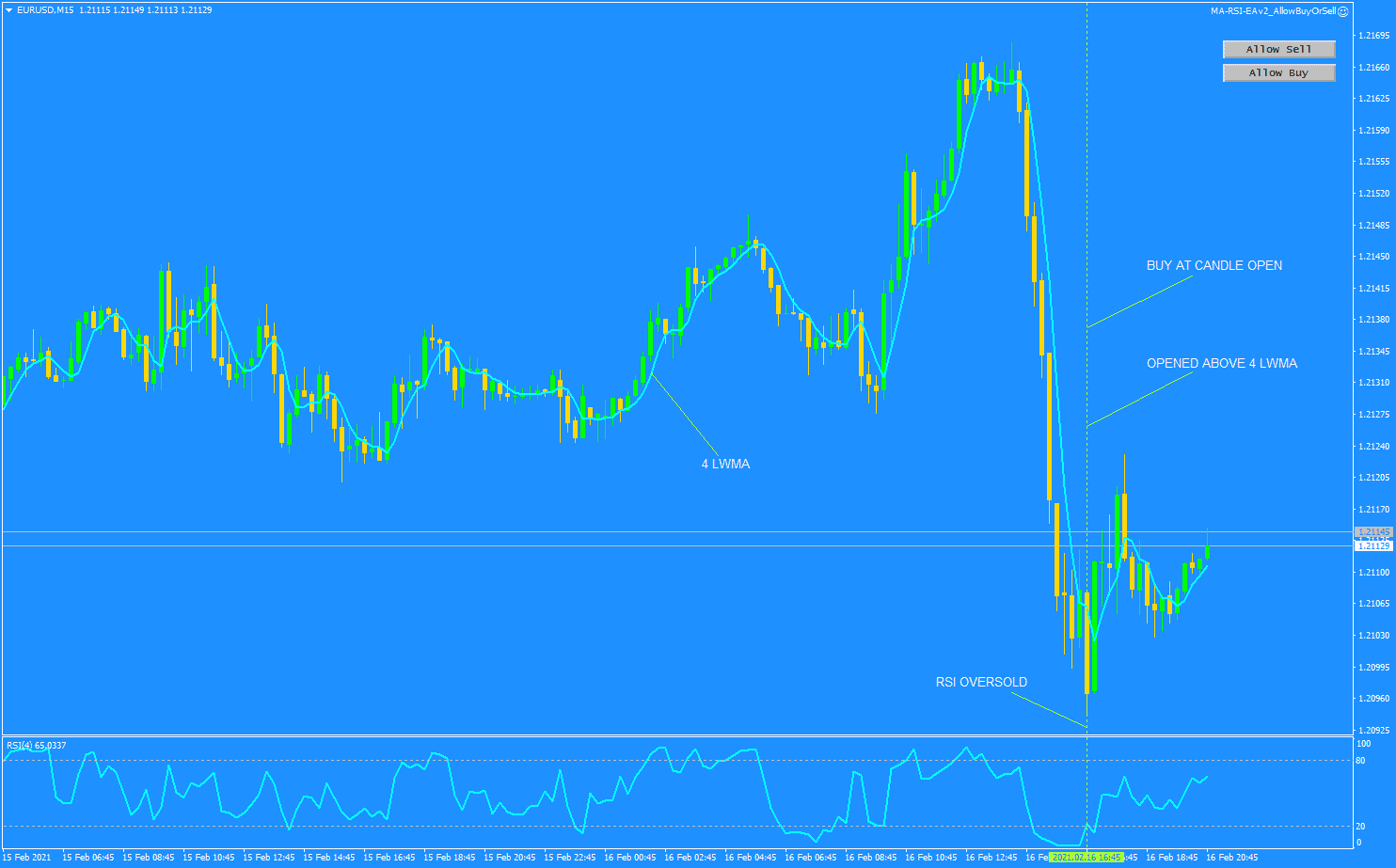 On every tick, the RSI MA Expert Advisor checks if a new candle has formed on the current chart. If so, the algorithm continues. Otherwise, the robot exits the start function and returns command to the terminal. If a new candle thus formed, the robot will loop through the orders not to count the number of trades, but to determine the net profits for long, short and total trades. This information will be used in adding trades.

The robot offers just enough variables in Inputs that the user can play around until he finds the best combination of settings. These variables are easy to understand for advanced and intermediate algorithmic traders, so the learning curve would be short. Below is the list of all available variables:

The expert advisor uses technical indicators as an alternative form of trade entry. This happens as a result of imbalance between net profits on the long and short sides. The signal for entry is generated as explained below:

While it appears that the RSI MA Expert Advisor contains a function that checks the net profit on every new candle to be able to close all trades in due time, trades are not closed by the robot at any point in testing. There might be a problem with this function. The only time the trades were closed was when testing ended at which point all trades were forcibly closed by the tester. The expert advisor does not set a stop loss and take profit to each trade.

The RSI MA Expert Advisor For MT4 – Room for Improvement

Clearly, the RSI MA Expert Advisor should not be used in live trading at present with the default settings. Doing this would put the capital in grave danger of wipeout. The main reason for this is the number of trades that the robot can open in total in the trading account. If not for the maximum limit set on each trading account by the client terminal, the robot might have opened more than 200 trades, which is very dangerous.

One way to address this big issue is the use of take profit for each trade. Even without stop loss, the trading system would be able to generate profits for the trading account, though at the expense of large drawdowns. In addition, it is better to add trades after price has moved a significant distance from the nearby trade. This way trades do not pile up easily without good reasons. As designed, trades should be added in the direction of trend so that all trades are liquidated when the profit of the greater number of trades overcomes the profit of the lesser number of trades.

It is not a good idea to use this trading system in demo trading at the moment. The issues raised above should be addressed first at the code level before someone attempts another testing in the strategy tester or demo account. Algorithmic trading in itself poses a lot of risk to the capital. Naturally, non-functional code carries more risk.