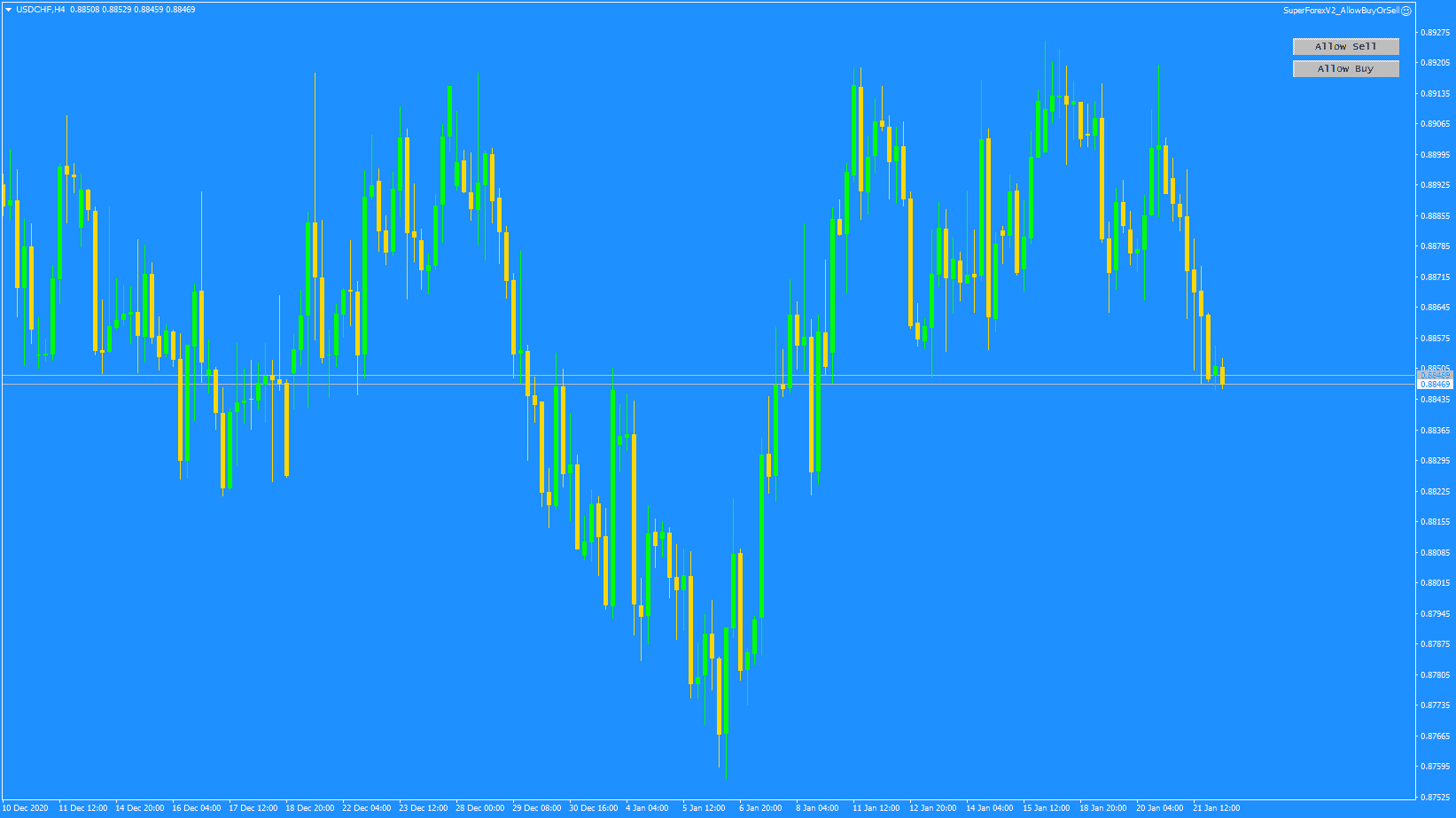 The SuperForex V2 Expert Advisor is a scalping algorithmic trading system for MetaTrader4. The name of the expert advisor might be a misnomer as the trading algorithm is very simple. It uses one technical indicator to execute trades in the opposite direction when the indicator gives an overbought or oversold reading. Oftentimes the trade positions are taken against the short-term trend.

The program creator designed this expert advisor for use in USDJPY foreign exchange pair and on the daily chart. When the robot was run in the strategy tester using five months of historical data, the robot generated 10 percent profit but subjected the trading account to 31 percent maximum drawdown. While the direction of the equity curve was unpredictable, the program managed to yield profit even at a low win rate of around 15 percent. 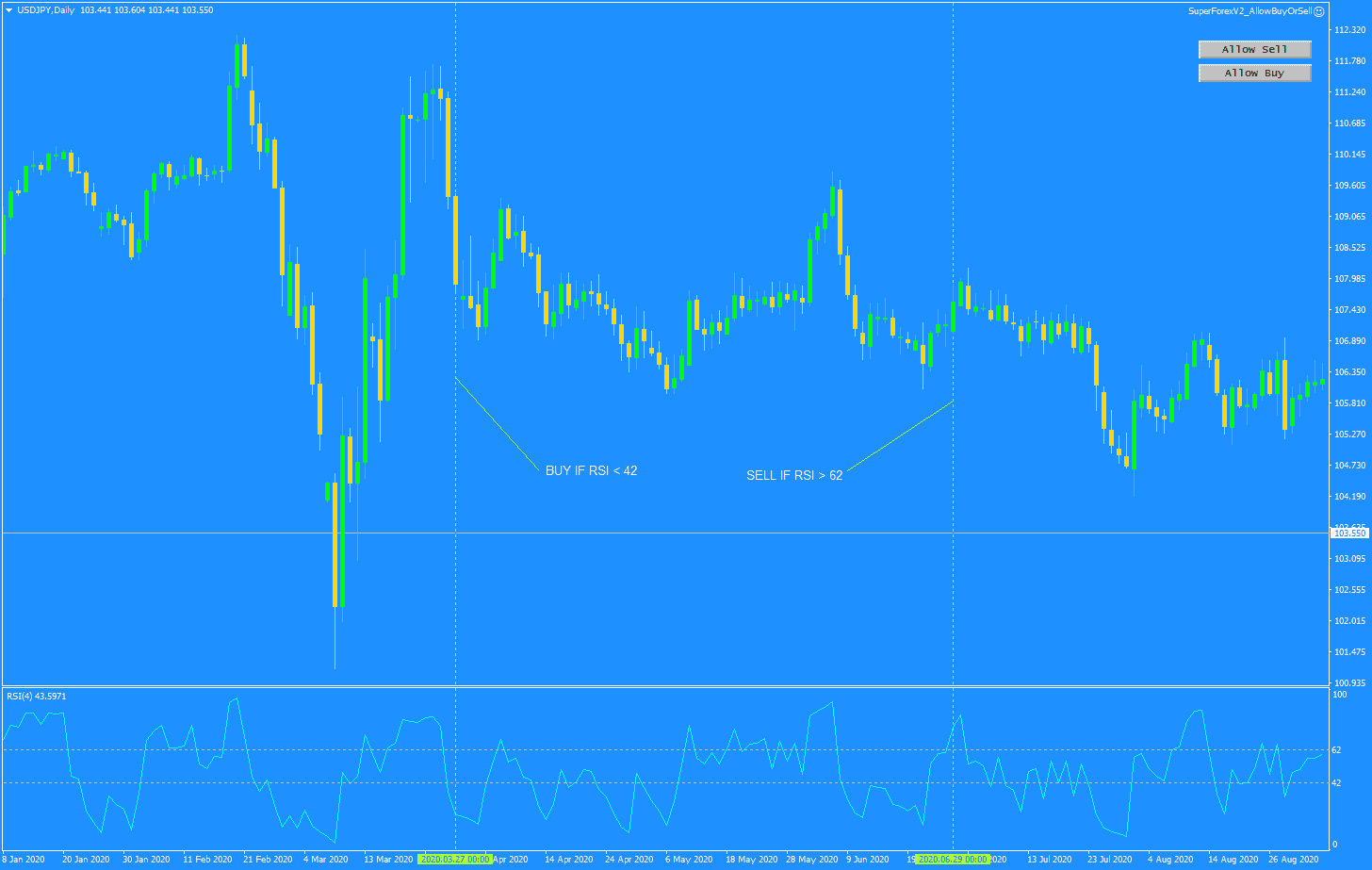 On every tick, before looking for a trade entry, the SuperForex V2 Expert Advisor performs two preliminary checks first. If the account free margin is not less than the lot size times 1,000 and there are more than 100 bars on the active chart, the expert advisor continues its operations. Otherwise, it exits the main function and turns over the command to the client terminal.

There are parameters in Inputs that the user must be familiar with and set correctly in order to maximize the potential of this expert advisor. These parameters, default values and descriptions are presented below:

The SuperForex robot uses the relative strength index as the sole indicator for trade entry. In this system, the RSI (period 4) interprets the underlying asset either as overbought or oversold when the oscillator reaches one or the other extreme level, and then the robot gives a signal to trade in the other direction. If the oscillator is greater than 62, that is an overbought reading and a sell signal is given. If the oscillator is less than 42, this is an oversold reading and a buy signal is indicated.

The trading system enters the market in real time. It does not wait for a new candle to form. It opens trades by the tick, but only one trade at a time. If another trade is already open, the robot does not look for another trade entry. If there is no open trade yet and a trade entry is available, it immediately sends a trade request to the server, with the take profit and stop loss specified.

A trade request is only executed if the take profit and stop loss specifications are accepted by the terminal client and by the trade server. The default stop loss is nine pips, while the default take profit is 109 pips. Most of the time the take profit target is not achieved as it is relatively far compared to the stop loss limit. Plus, the robot employs trailing stop.

The lot size used in trade execution is not the value set by the user in Inputs. It appears that the lot size indicated in Inputs is multiplied by 10 to get the actual trade volume. By default, the lot size is 0.10 unless the user makes an adjustment. This means that the traded lot size is 1.0, which is usually on the high side for most trading accounts.

In reality, the trade volume is calculated in this manner. The expert advisor ignores the default lot size or whatever value is set by the user in Inputs. Instead, it divides the account balance by 10,000. The quotient then becomes the actual lot size. To avoid errors when sending orders, the robot checks if the lot size obtained is greater than the maximum permissible lot size for the current trading account. If this is the case, the maximum lot size becomes the actual lot size.

The SuperForex V2 Expert Advisor manages its open trades actively. More often trades are closed either forcibly the expert advisor or by the stop loss. This is evident when one looks at the trade results in back testing. An open trade is forcibly closed when the RSI gives a signal opposite to its direction. For example, if the current trade is a buy and then the RSI gives an overbought reading, the current trade is closed right away. When a trade is closed this way, a trade in the opposite direction is immediately executed to take the place of the previously closed trade. However, forced closure of trades only happens if the running profit of the open trade is positive.

Trailing stop is another function used by the expert advisor in managing trades. If a trade gains at least six pips, its stop loss is trailed until price hits the new stop loss. Oftentimes the take profit is not reached as it is too far ahead. The lot size of trades varies by the account balance. It goes up and down as the trading account earns or loses money. The next lot size is not a multiple of the previous trade’s volume.

The SuperForex V2 Expert Advisor For MT4 – Room for Improvement

Testing using five months of historical price data was done to determine the profitability of the SuperForex V2 Expert Advisor. Sadly, the testing result was negative. The equity curve was going down continuously and almost reached zero. At the end of testing, the account was almost wiped out, and the maximal drawdown was a little less than 100 percent. As a scalper, the trading system executed 550 trades per month on average, with a win rate of 47 percent.

The above test result should make anyone wary to use this trading system in live trading. The program code should be reviewed and reworked to correct apparent issues. One issue is the point value used in actual trade operation. While the expert advisor defines at the beginning of the tick function a variable containing the correct point value, the algorithm did not refer to this variable in the actual trade operation. In another instance, the order profit is divided by the point value, which is incorrect. Normally, the point value is divided to the price to get the points or pips. The inconsistent and incorrect coding could be the reason why the robot failed miserably in testing.