The Simplest RSI based Expert Advisor For MT4

The The Simplest RSI based Expert Advisor For MT4 is a simple algorithmic trading system for MT4 platform. As the name suggests, this robot is indeed the simplest of all RSI-based trading systems. It can be used to trade any foreign exchange currency pair, but the 28 major pairs are preferable due to low spreads and stop levels. The user can apply the robot to any timeframe, from one minute to the monthly chart.

This expert advisor is lightweight and does not use much computer resources so it can be used even in slow computers. Regardless if the user is using a trading account whose price quotes come in four or five digits for dollar pairs and three or two digits for yen pairs, the robot still works just fine.

However, the user is advised not to use the trading system in live trading right away as the robot does not yield a positive result in the strategy tester during testing. Still the test run was short in duration so it cannot speak for the effectiveness of the trading system. It only gave an assurance that the robot works as intended based on the trading algorithm designed by the creator.

Anyone interested to put the expert advisor to the test and find the settings that work is encouraged to do testing for a longer period of time using optimization. Using various trading instruments and timeframes to find the best combination that will yield the best results is also a good idea to explore. This might be a personal journey for interested users.


The The Simplest RSI based Expert Advisor For MT4 – Entry Criteria 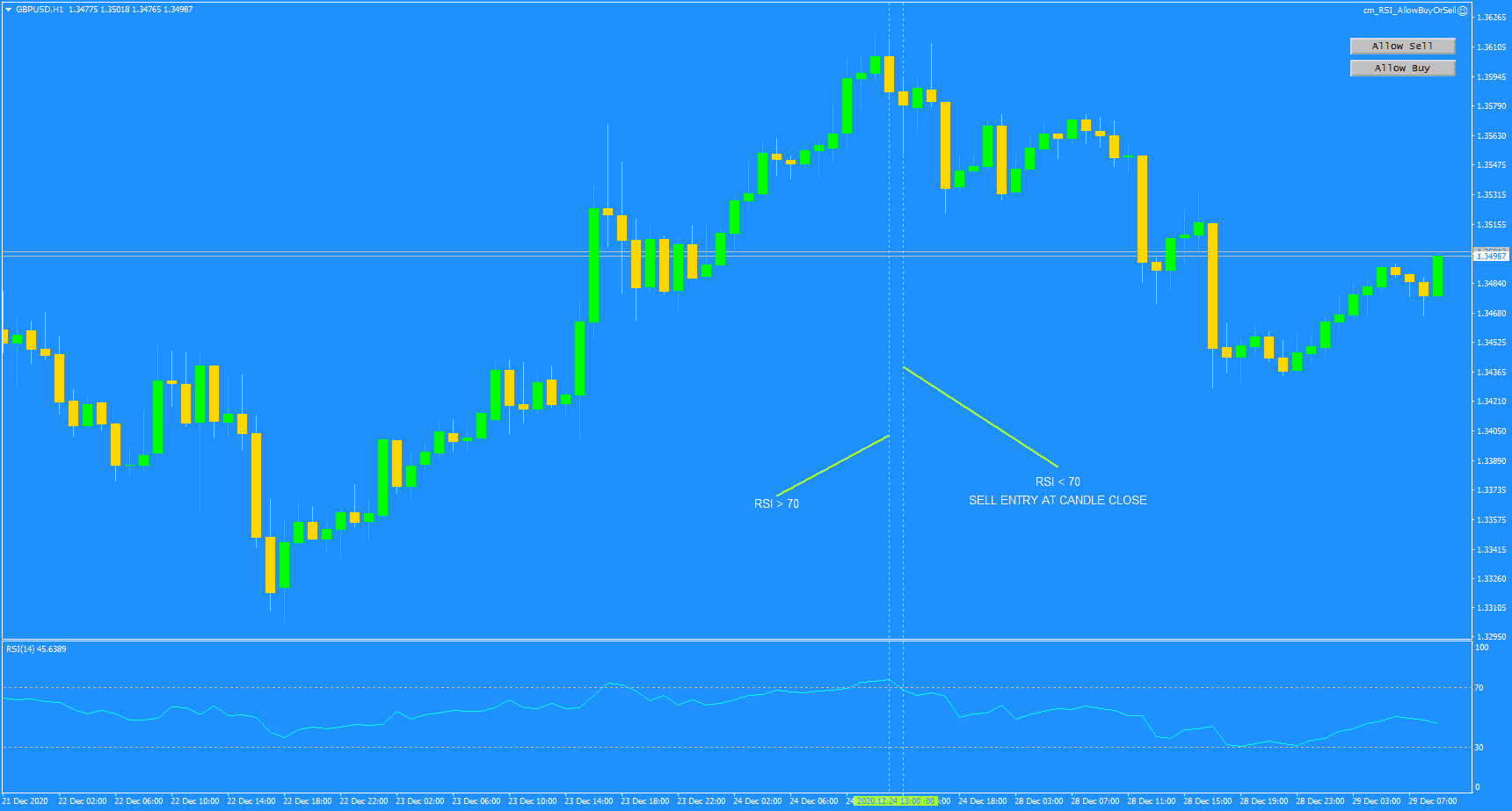 As a simple expert advisor, the Simplest RSI based Expert Advisor for MT4 does not perform routine checks prior to trade hunting. It does not check if a new candle has formed as it runs by the tick. As a new tick is received, the robot immediately loops through the orders in the trade pool to get the number of open trades. If there is an open order, it looks at the magic number and symbol. If there is no open trade with the magic number defined in Inputs and on the current symbol, the robot is ready to look for trade opportunities.

When looking for trade entry, the robot only refers to one technical indicator for direction. This indicator is none other than the relative strength index as suggested by the name of the robot. In the trading algorithm, the RSI being used has a period of 14 and is applied to price open. Period 14 is standard for the RSI in MT4 platform, but the price open application is not typical. Normally, the RSI is applied to price close.

The RSI with the current settings looks much the same as the standard version. The use might not be conventional, but it has merits. This method of applying an indicator to the open price is considered by some traders to be better than applying one to the close price as the current indicator value may continue to fluctuate so long as the current candle has not closed. Whereas once a candle has opened, its open price is permanent from open time to close time. In this system, the RSI value corresponding to the current candle does not oscillate when new ticks come in. It only moves once at the beginning of a new candle.

Some traders use the RSI as a momentum indicator to confirm a trade in a specific direction. In this method, when the RSI crosses above the 50 level from below, that is a confirmation of a bullish signal. When the RSI crosses below 50 from above, it confirms a bearish signal. In this trading system, the RSI is being used as a reversal indicator. As trends tend to fluctuate up and down regardless of direction, it is possible to ride the waves and trade in every direction by using the overbought and oversold readings of RSI.

Once the RSI gives a signal and there is no open trade on the current symbol, the robot immediately takes a trade with a lot size of 0.10 as defined in Inputs. Each trade comes with a stop loss of 100 points and take profit of 200 points. They are not in pips as some may assume, looking at the value in Inputs. Later when the robot runs in testing or demo, the user might be surprised to realize that the stop loss and take profit stop orders of a trade are too close to the open price.

The The Simplest RSI based Expert Advisor For MT4 – Exit Criteria

The Simplest RSI based Expert Advisor for MT4 does not actively manage open trades. Once a market order is executed, the robot allows price to decide the outcome of the trade by taking either the stop loss or the take profit. It does not attempt to secure winning trades by breaking even or letting profitable trades run for more profit by trailing the stop loss. These functions are not available in the program for the user to switch on and off. In this trading system, trades come and go very quickly, so it can be considered as a scalping expert advisor.

The performance of the Simplest RSI based Expert Advisor for MT4 in the strategy tester is not yet satisfactory as the net profit ended up in negative territory at the culmination of testing. However, the statistics do not look too bad at all. The drawdown is small, expected payoff is mildly negative, and the profit factor is a little below one. The robot takes several trades during the test run, and around 30 percent of them are winners. These figures show that the RSI robot has a potential as an automated trading system.

This expert advisor needs further development to improve its performance. Anyone with programming background must find a way to increase the win rate of this trading system. The current win rate of 30 percent seems not enough to generate profits, although the risk-reward ratio in use is favorable for the trader. Risking 10 pips to gain 20 pips sounds good in the point of view of money management. Experienced traders prescribe this ratio as minimum to be profitable in trading, automated or manual. The bigger the ratio, the more profitable a system is expected to be.

To increase the win percentage, another method might be added as a primary trend identification tool, putting the RSI as a confirmation tool. This combination is not something new. Many trading systems are founded on this concept. One very effective tool for trend direction is the moving average. Depending on the developer, one or more moving averages can be used and they can be applied to the current, lower or higher timeframe.

From observation, the RSI line with the current settings seldom goes above 70 and below 30, resulting in fewer trades. Also, trading based on overbought and oversold concept alone is not enough if greater profitability is desired. Often times trades taken this way run against the current trend momentum and direction. It is better to trade with the long-term trend and go against the current momentum than trade against both forces.