Trailing Stop That Can Do Everything Expert Advisor For MT4 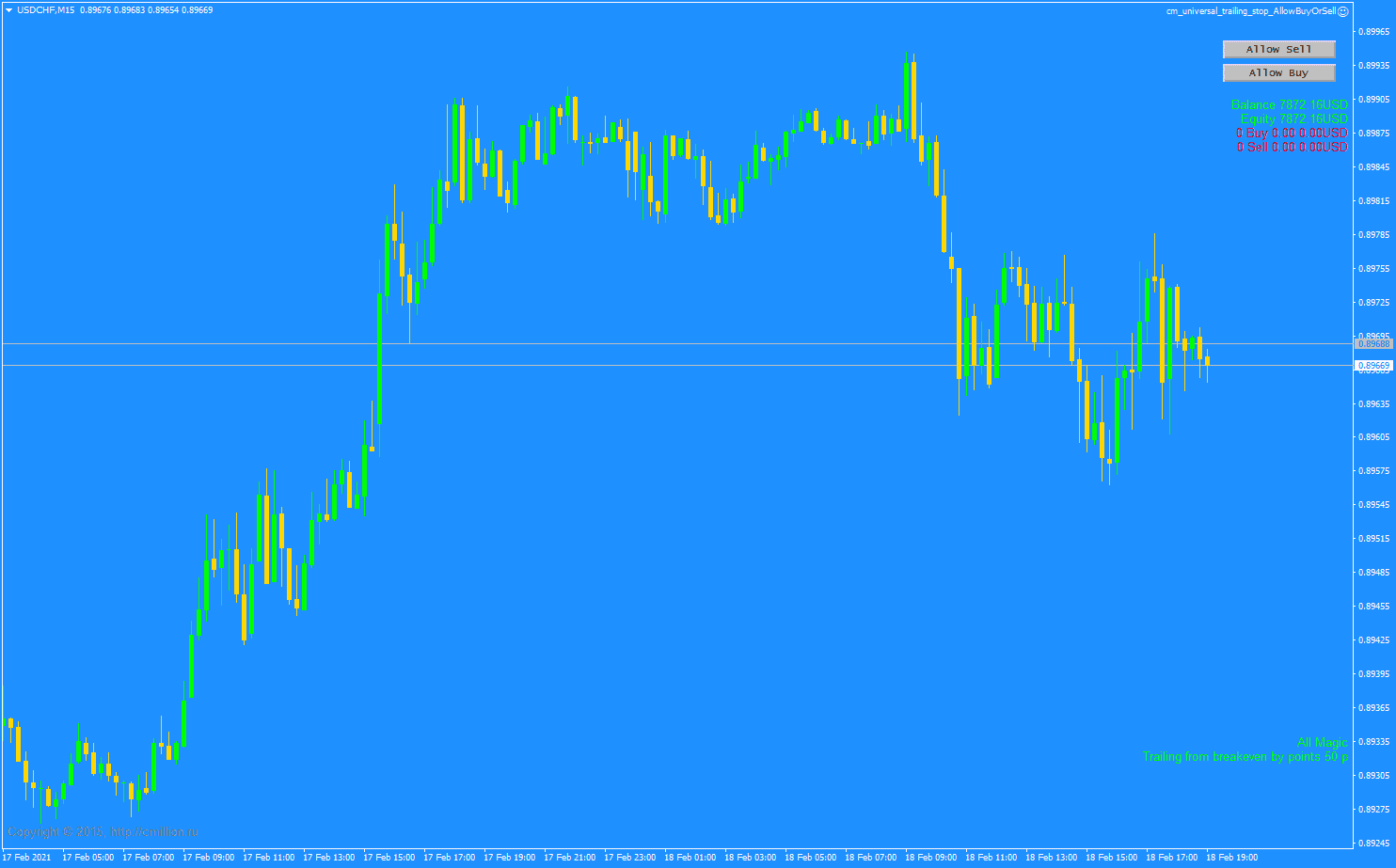 The Trailing Stop That Can Do Everything Expert Advisor For MT4 does not only adjust trades on the chart using various methods, but it also employs several strategies to make money and reduce trading risks. One strategy being used is hedging. Every time the robot opens a trade, it always comes in a set of buy and sell trades. Also, it handles trade management by set or basket, that is, assigning one stop loss price to all open trades. Initial testing shows this robot has positive prospects of becoming a profitable trading system. 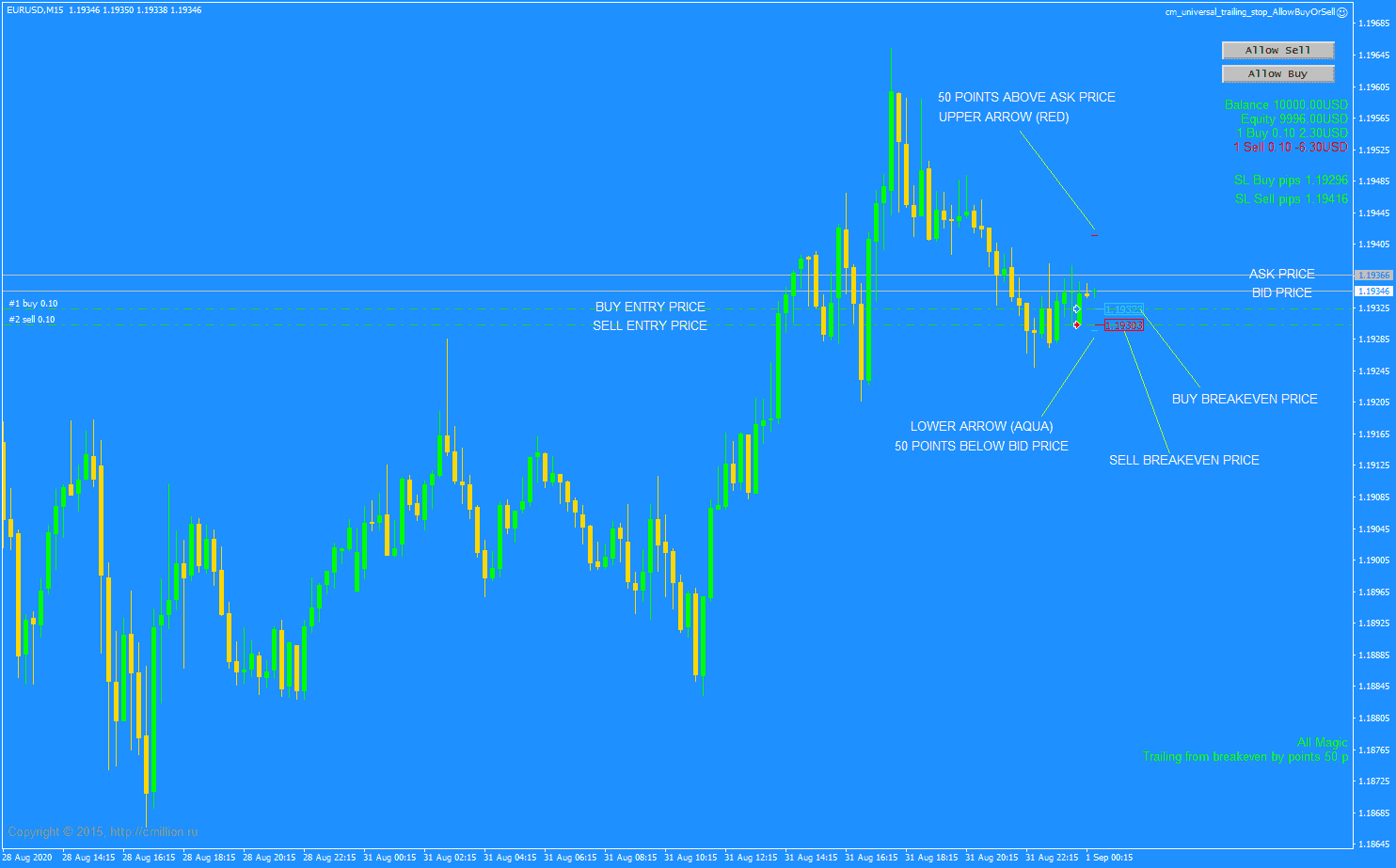 The Trailing Stop That Can Do Everything Expert Advisor displays some information on the upper-right portion of the chart to help the user track the progress of open trades and the overall trading performance. The information provided to the user includes the real-time balance and equity, number of buy and sell trades, and open profit for buy and sell trades, among others. When a trade or set of trades is winning, it is shown in green text. If losing, it is shown in red text. See image above.

The expert advisor also creates some objects on the chart not only for display purposes but also for trading operations. These objects include the upper and lower arrows in short horizontal lines for use in stop loss adjustment and the text objects containing information about the buy and sell breakeven prices. When these objects are triggered, trades are affected in some way.

There are some parameters in Inputs that the user can adjust. These include the following:


After the expert advisor is added to a chart, it immediately opens buy and sell trades with a lot size of 0.10. The buy trade is placed above the sell trade, and the distance between them is the value of the spread at the time of entry. These trades have no stop loss and take profit values. After the trades have been taken, the robot draws two arrows on the main chart, one above the ask price and another below the bid price. The arrows are displayed as short horizontal lines, one is red and the other is aqua. The two arrows move up and down in unison with price, maintaining a distance of 50 points.

Immediately after one trade is closed in profit after price touches its stop loss, another set of hedged trades takes its place, meaning the new trades are buy and sell positions. These trades are added without time delay after the previous trade. At this point in the discussion, there are already three trades open on the current symbol (one buy trade and two sell trades). As in the first set of trades, the new set of trades comes with an upper arrow and lower arrow 50 points from market price.

The Trailing Stop That Can Do Everything Expert Advisor can open as many trades as possible on the current symbol. If the current trend is long, buy trades are opened and closed shortly, while sell trades pile up, causing drawdown to the trading account. This scenario is depicted in testing as two lines diverging from each other. While the balance line is moving up, the equity line is going down.

When there are already several trades of one type on the chart and price begins to retrace, the expert advisor handles trade management in this manner. An example will easily illustrate the concept. If there are multiple sell trades and there is only one buy trade, meaning price went up for some time, the stop loss of the last sell trade is not adjusted even if the upper arrow has touched its open price.

The whole set of sell trades is adjusted as one unit. This happens when price makes a significant correction to the downside against the current bullish trend. If the ask price has gone 50 points below the breakeven price of the basket of sell trades, the stop losses of all sell trades are adjusted to the same price. Stop loss adjustment is done point by point until price touches the new stop loss, resulting in trade closure of all the sell trades.

As observed in testing, the Trailing Stop That Can Do Everything Expert Advisor is suitable for trading ranging markets. When the traded symbol trends in one direction, counter-trend trades pile up and cause drawdown, resulting in divergent balance and equity curves. The two curves come together when market has made enough correction to close all negative trades in profit beyond the basket breakeven price.