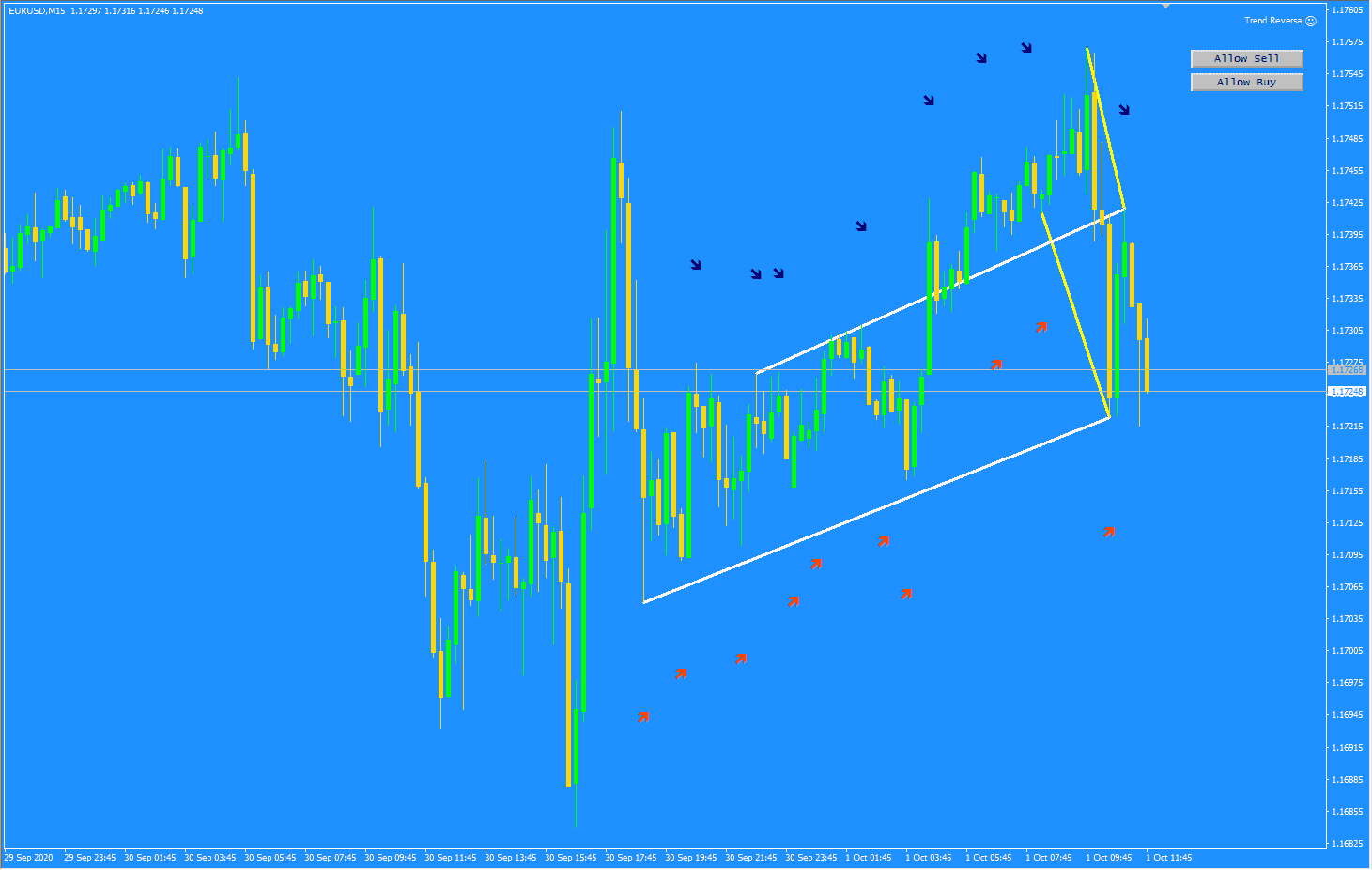 The Trend Reversal Expert Advisor For MT4 is an advanced algorithmic trading system developed for MT4 platform. While its name suggests reversal trading, the actual operation shows otherwise. It appears the robot works as a trend trading system.

The robot performs several complicated calculations in the background not only for trade entry and exit. Like an indicator, it prints arrows on the chart above and below price as well as two pairs of trend lines above and below swing points. The up arrows indicate that price has made short-term lows, while the down arrows mark the creation of short-term highs. Once plotted the arrows are fixed in place; however, only the last 10 up arrows and 10 down arrows are being displayed. Old arrows are removed as soon as new ones come up. 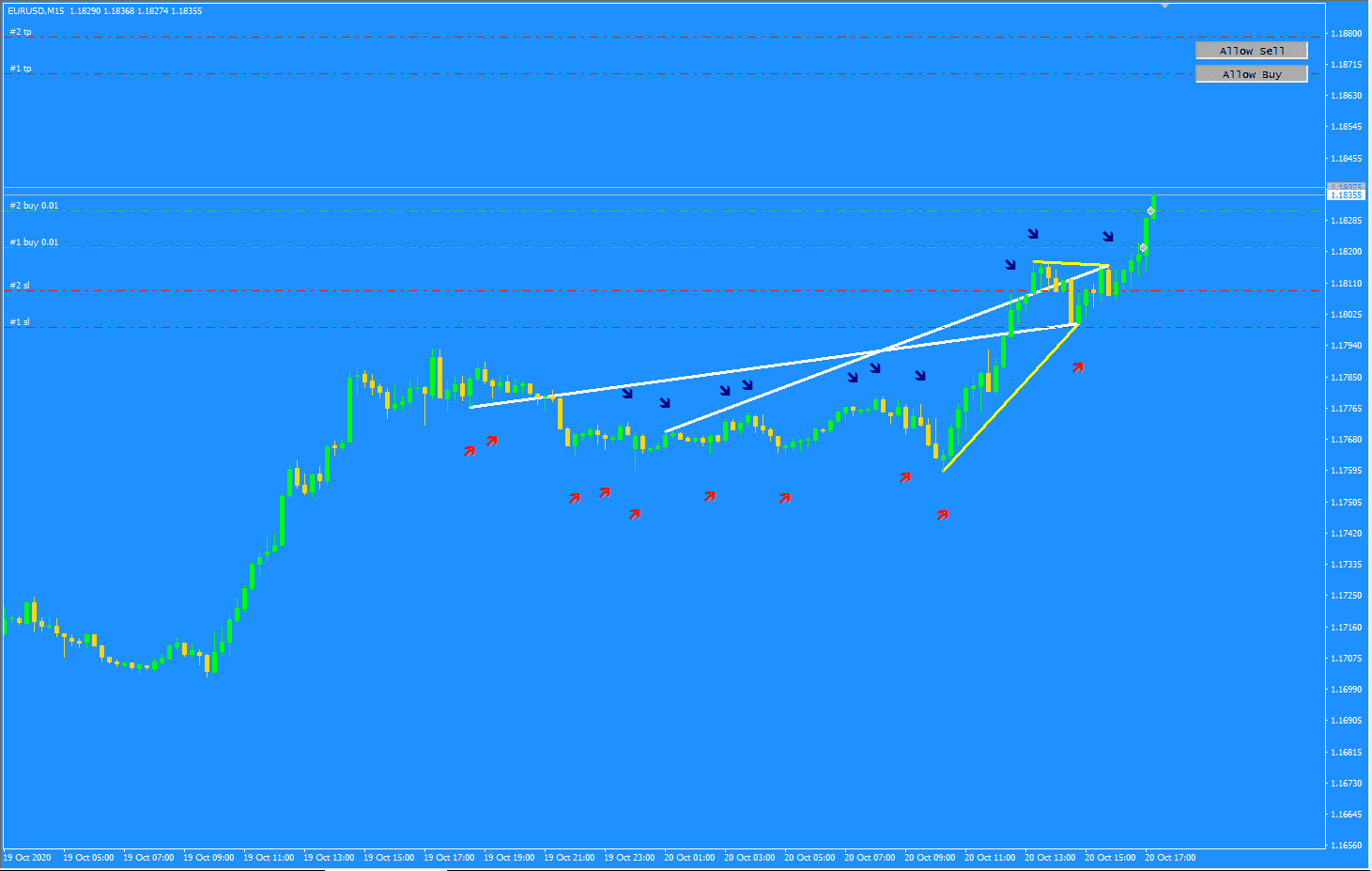 The Trend Reversal Expert Advisor for MT4 performs complicated calculations at the beginning of a new candle as a new tick is received. First, it checks if the active chart has more than 100 bars and if the take profit is more than 10 pips. Then it inspects the free margin of the trading account to see if it can take on new or additional trades. If these are not true, the robot stops its operation, waits for a new candle to form and do another round of checking. If the conditions are true, the program moves forward.

The robot takes one type of order at a time. If the first trade is a buy, the succeeding trades are all buy trades. It executes trades at the start of a new candle, and it can open up to 10 trades for the current symbol at any one time. By default, it uses the lot size indicated in Inputs (0.01 lot). All trades taken have individual stop loss and take profit orders depending on entry price. The default stop loss is 20 pips, but the robot adds the spread to the stop loss distance, so the risk increases by the amount of the spread for the current symbol at the moment of trade execution. Meanwhile, the default take profit is 50 pips, but the robot subtracts the value of spread from the take profit distance, resulting in profits a spread lower than expected.

The technical indicators in use and their settings are explained below:

Although the trades taken by the Trend Reversal Expert Advisor for MT4 have stop loss and take profit targets, the robot manages the open trades actively. If trades are not closed by the original stop loss price, they are closed when price hits either the adjusted stop loss price or the take profit price. This is because breakeven and trailing stop functions are enabled by default. The benefits of these two functions are two-fold. First, profits are secured by not allowing winning trades to turn around and end up losers. Second, trades are given more room to run for more profit as long as momentum in the trade direction is there.

The Trend Reversal Expert Advisor For MT4 – Room for Improvement

The Trend Reversal Expert Advisor for MT4 starts out good in the strategy tester, but it ends close to breakeven at the end of testing. This testing, though fairly limited in time range, shows that the robot is not yet suitable for live trading but has great potential to deliver an excellent performance if improved.

While the ratio between stop loss and take profit is about two, the minor difference due to the spread consideration throws the profitability of the trading system slightly off balance. Another issue is the close distance of trade orders. Trades are too closely bunched together in a tight range of price area, leading to huge drawdowns and frequent liquidation of trades on the losing end.

Most of the time the trade direction chosen is correct, but more often than not trades turn into losers in the end. A more active approach in profit taking may be necessary to secure gains. Another area to improve on is the addition of trades of the same type. It is best that another trade is added if the previous trade has become profitable and its stop loss has been moved to breakeven or trailed. This way the addition of trades does not add risk to the account.