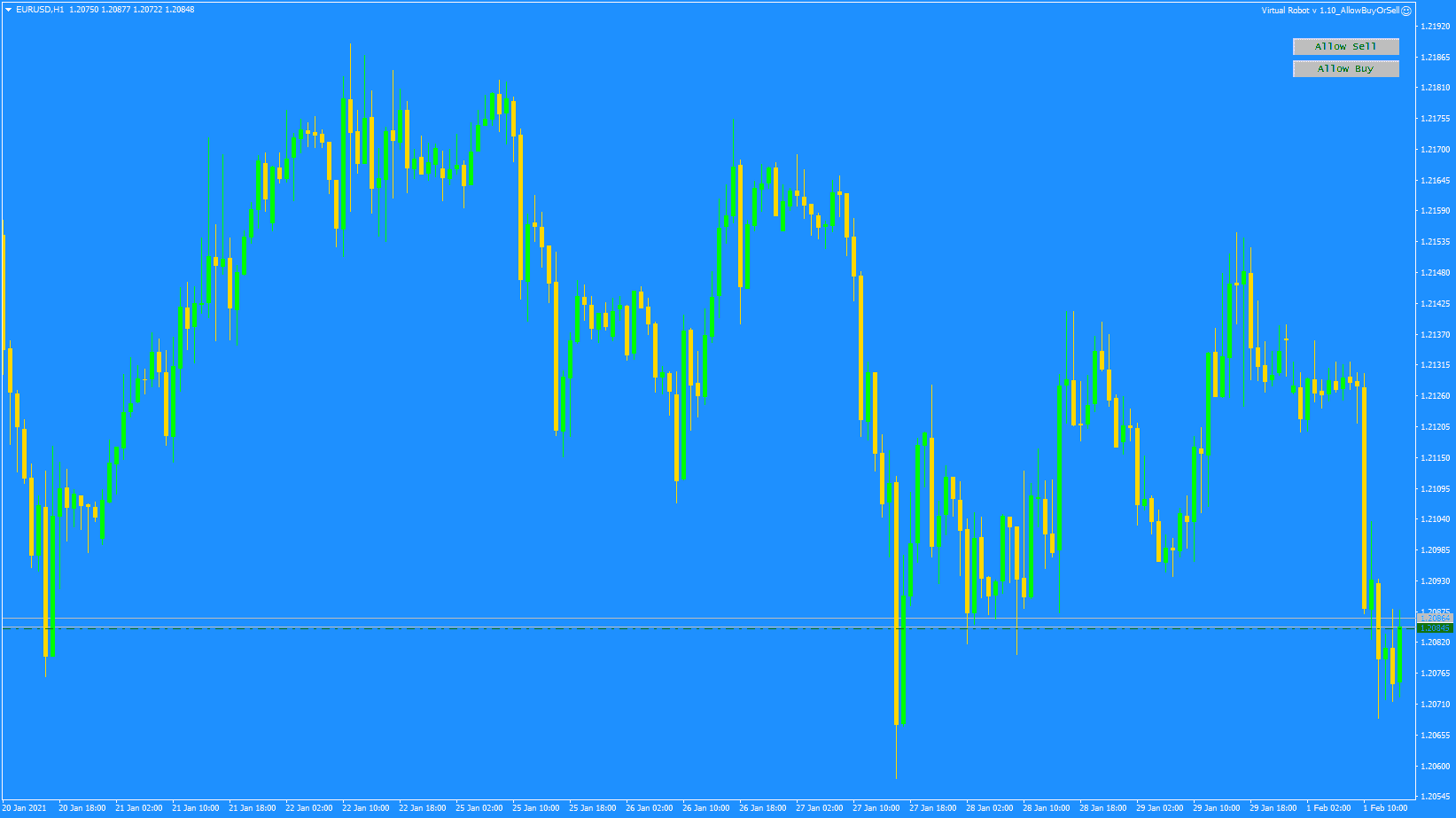 The Virtual Robot Expert Advisor For MT4 uses the martingale approach to extract profits from the foreign exchange market. It is designed to be used on the hourly chart of any symbol, but the 28 major pairs are preferable due to their manageable spreads. Unlike a full martingale strategy that doubles the lot size of the previous trade to arrive at the new lot size for the next trade, this expert advisor uses a slightly lower multiplier (i.e., 1.5), reducing the risk in the process.

Initial testing with the default settings proved successful. The trading system generated a good amount of profit when tested over a period of five months of test data. This result came with an acceptable amount of drawdown. Algorithmic traders might be interested to use this expert advisor in live trading. However, as in the case with all automated trading systems and more so with martingale-type systems, automated trading involves risk to the trading capital. Therefore, the user must do further testing and exercise caution when trading live with this trading system. 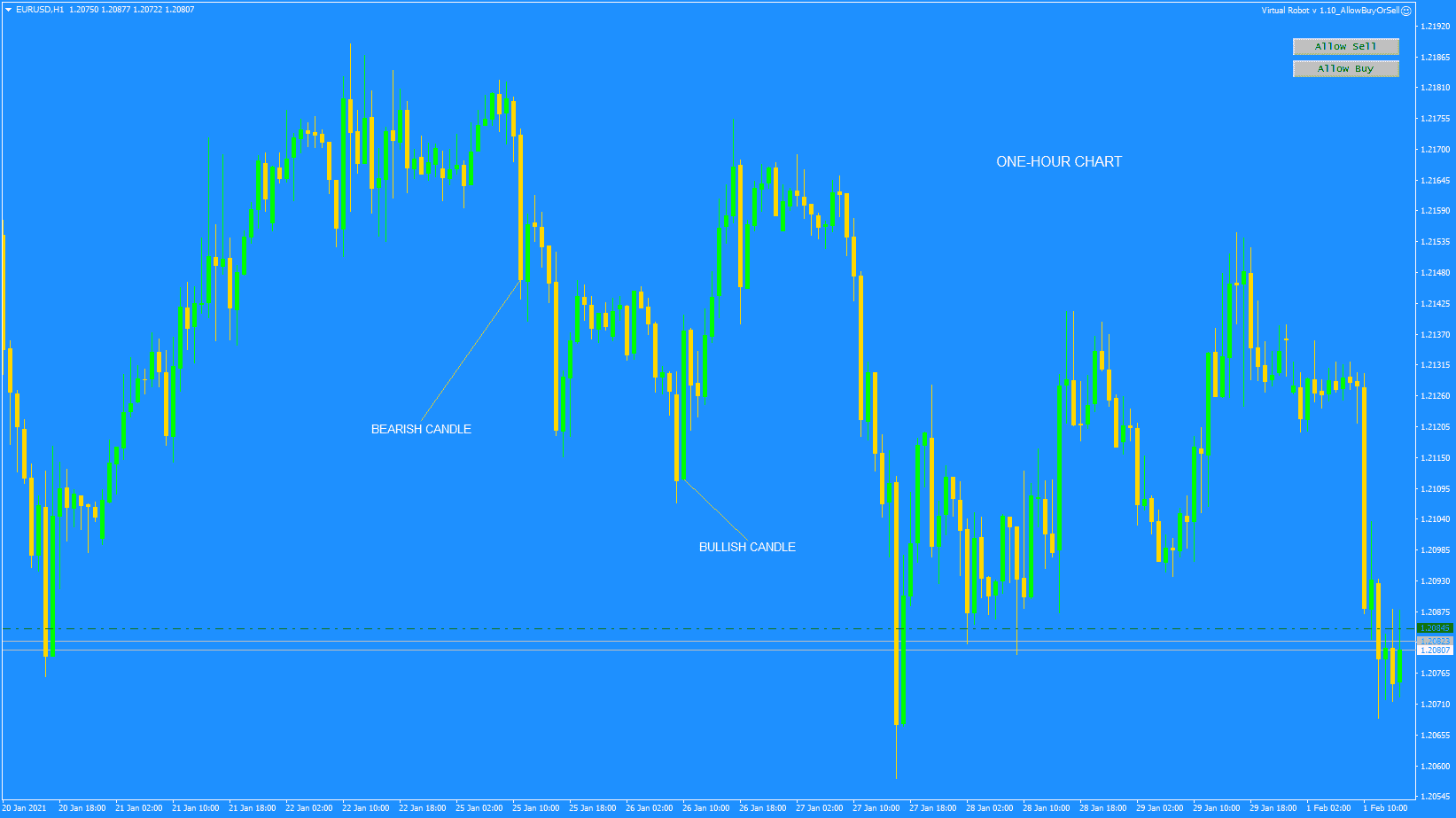 The Virtual Robot Expert Advisor uses an intricate entry strategy when entering trades. However, it does not include a technical indicator in the set of entry rules. A very simple price action is used as the primary entry criteria. The expert advisor performs various checks on every tick, but it enters trades only at the formation of a new candle.

The user is offered a few options in Inputs that he must understand and learn to use to get the best results. The most crucial options are explained below, along with their default values:

The expert advisor does not utilize any type of technical indicator for trend identification. A simple price action strategy is used to determine the direction of the first trade. The program considers one candle only in getting the trade bias. If the previous candle of the current period and symbol opens low and closes high (bullish candle), a signal for buy trade is generated. If the candle close is lower than the candle open (bearish candle), a signal for sell trade is produced.

Trading commences after the expert advisor determines that there is no open order yet on the active symbol and if the entry criteria are satisfied. As already mentioned, the robot looks for trade opportunities on the hourly chart unless the user specifies another timeframe. The lot size for the initial trade is 0.01 as defined in expert settings. Right after the trade is executed, its stop loss and take profit are immediately added.

The stop loss of the first trade is set at a distance of 400 pips from entry price, while the take profit is placed at a distance of 100 pips. This means that the risk-reward ratio is 4 in favor of risk. With this setup, it will take four winning trades to cover one losing trade. The only way for the virtual robot expert advisor to be successful is by having a high win rate.

When the initial trade becomes profitable and gains 40 pips, it will be forcibly closed by the expert advisor and a profit is realized. As observed in testing, although the take profit is set at 100 pips, trades are closed much earlier, that is, at a lower number of pips. On the other hand, if the initial trade is losing and price has moved at least 18 pips from the trade entry price, another trade will be taken on the same direction but with a higher lot size.

Trade addition will continue until price makes a little correction just enough to close the set of trades in profit. The lot size of the subsequent trades is 1.5 times higher than the previous trades. While the first trade has a stop loss and take profit, the subsequent trades have no such specifications. As noted in testing, the group of trades is closed when the last trade in the set earns at least 40 pips.

The Virtual Robot Expert Advisor For MT4 – Room for Improvement

As previously discussed, the Virtual Robot Expert Advisor performed well in testing. This testing was done on the EURUSD hourly chart using five months of historical data. With the default timeframe, the robot executed only very few trades (34), and about 68 percent of these trades made money. While the trading system employs the martingale approach, it managed to produce a low drawdown. The maximal drawdown is only less than three percent, which is very satisfactory.

The most apparent metric in the testing result is the huge profit factor of 10.6. A profit factor higher than one is always considered profitable. The result shows that the trading performance is remarkable, and it is possible for the robot to generate big profits for the trader for a short amount of time. As always, the user is advised to be very careful when using the trading system in live trading. He should consider the risk involved in every trading decision. Preserving the capital is still far more important than gain.

While everything sounds good so far, there is at least one area where an improvement is in order. It appears that the take profit target and the stop loss limit are not used at all in managing trades. The expert advisor is still actively involved in trade management. It can be said that the stop loss and take profit specification serves no purpose. With that being said, removing or not placing the stop loss and take profit values on the initial trade might be better. However, this change must be done programmatically and needs someone knowledgeable of MQL4 coding to be implemented.