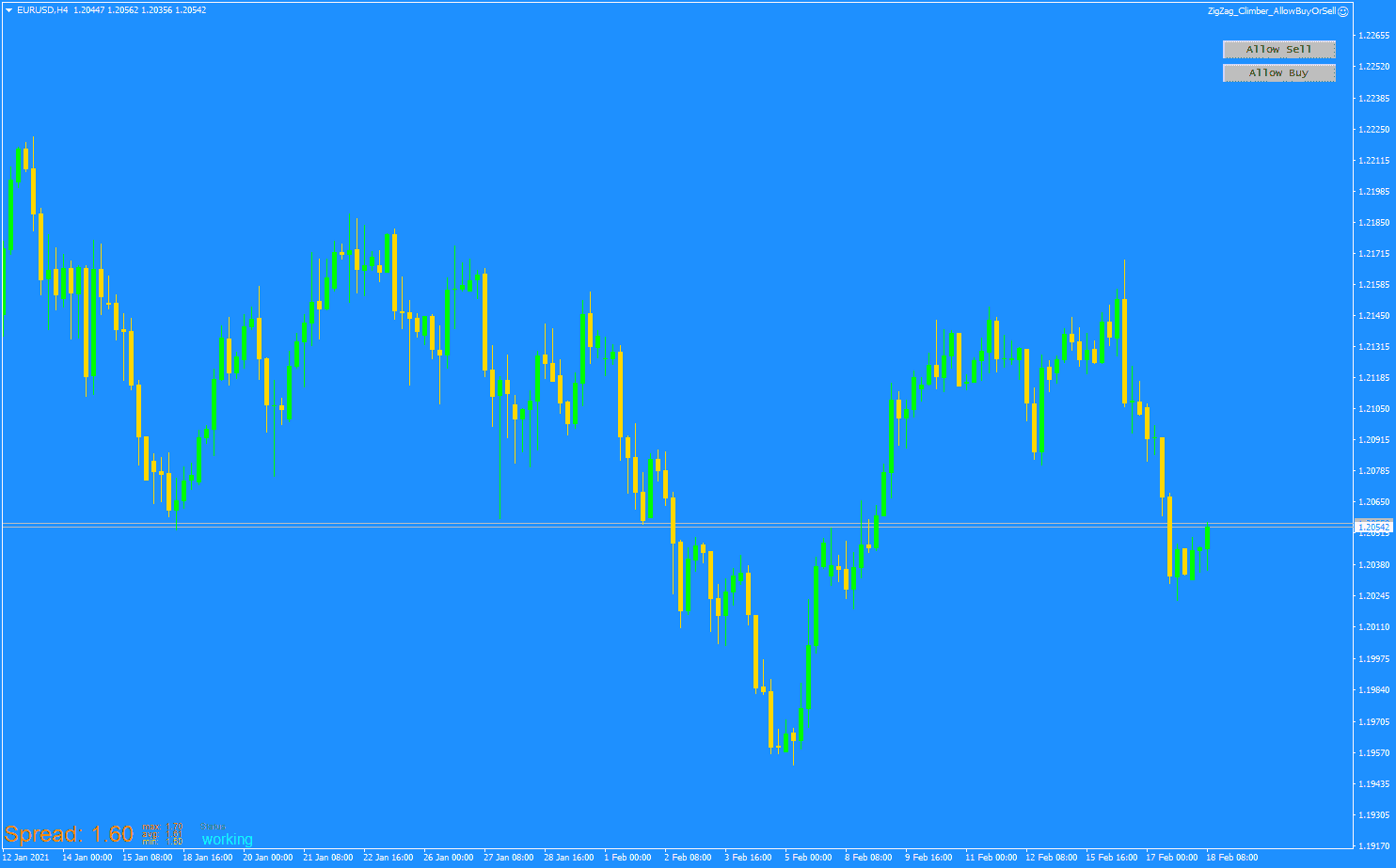 It is not clear why the ZigZag Climber Expert Advisor For MT4 is named as it is by the program creator. The code does not seem to contain information or make reference to the zigzag indicator available in the MetaTrader4 platform. Basically, this expert advisor is a hedging trading system. It opens buy and sell trades at the same time and puts their stop loss and take profit values at almost the same prices. As a result, the two trades are closed simultaneously, but not all the time.

Looking at the equity line in the strategy tester, one can see that the line moves in a zigzag manner. This is possibly how the expert advisor got its name. The problem is that the equity curve zigzags to the losing direction and not to the winning direction, meaning the trading account loses money over time. While the code looks complicated and rather lengthy, the expert advisor does not seem to perform important functions other than opening hedged trades on the current symbol. 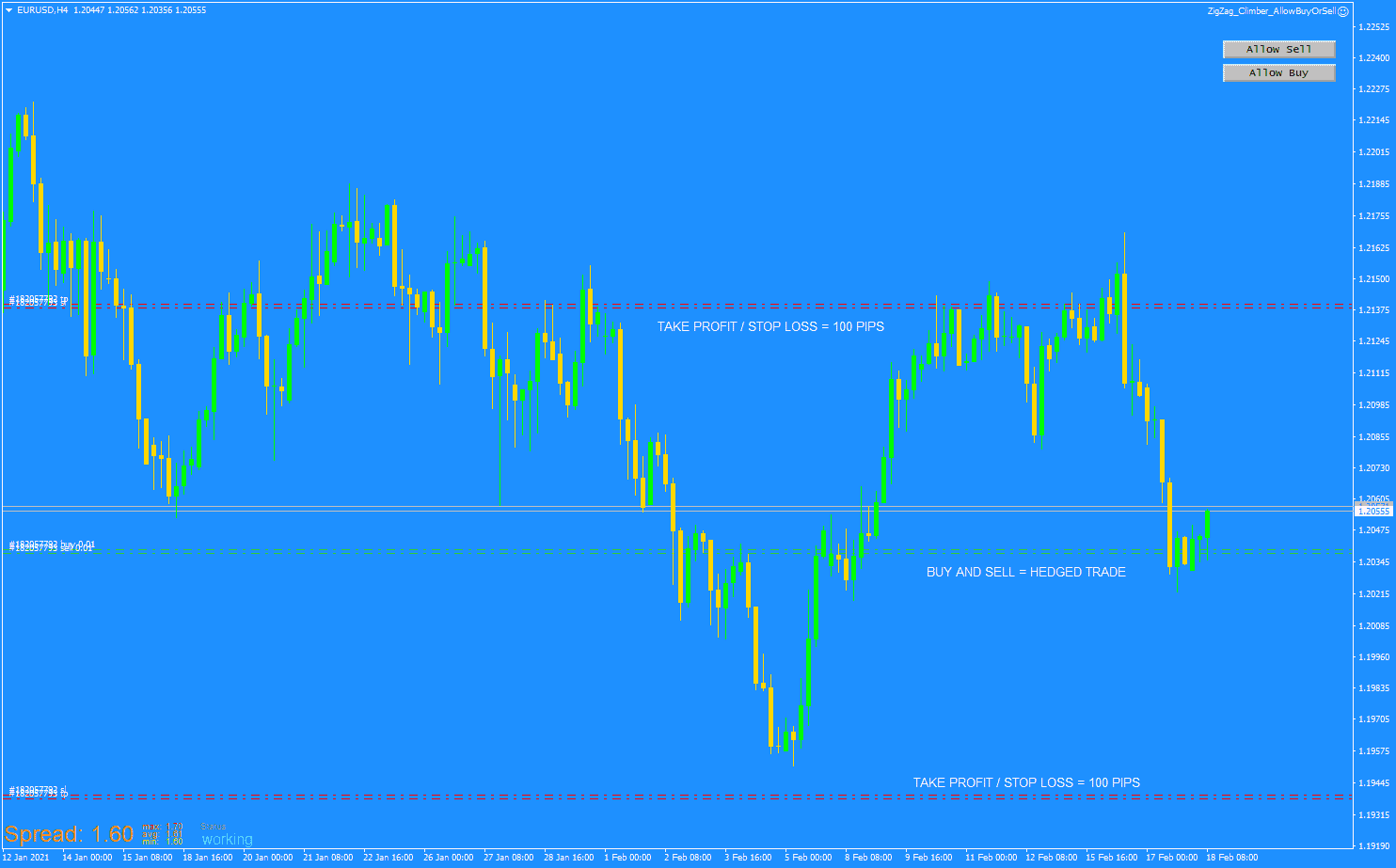 The ZigZag Climber Expert Advisor shows some information on the lower-left portion of the main chart to inform the user about the current status of the robot and the current spread. The status is either running or stopped. Regarding the spread, four types of information are provided. The spread with the biggest font is the real-time spread. The max spread is the highest spread recorded by the robot in its runtime. The min spread is the lowest spread recorded so far. The average spread is simply the average value of the maximum and minimum spreads.

Despite the seeming sophistication of this expert advisor, it gives the user very few parameters to work on in Inputs. Only one is presented below as the others are beyond comprehension. This parameter is the magic number (see below).

The trading system does not use any technical indicators when looking for a trade entry. As a hedging strategy, it does not need a signal from an external source to open trades. The moment the expert advisor is dropped on the chart, it immediately opens two market orders (one buy trade and one sell trade). Because of this, the trades are a spread apart, with the buy trade placed above the sell trade.

Each trade has a lot size of 0.01 as prescribed by the expert advisor, and the user has no option to control this parameter. Both trades have a stop loss of 100 pips and a take profit of 100 pips. Since the trades are hedged, the stop loss of one trade almost coincides with the take profit of the other trade. The two trades are opened almost at the same time in real time. The robot does not wait for a new candle to execute the trades.

The ZigZag Climber Expert Advisor handles the trade management passively. That is, it allows the market to determine the outcome of both trades. If market price hits the stop loss, the trade is closed in loss. If market price hits the take profit, the trade is closed in profit. As a hedging system with stop loss and take profit, the two trades are closed simultaneously. When one trade is in profit, the other trade is in loss, with different amounts. The problem with this strategy is that the losing trade loses more money than the winning trade wins money. This is noticeable in testing.

The ZigZag Climber Expert Advisor For MT4 – Room for Improvement

As observed in testing, the performance of the ZigZag Climber Expert Advisor fluctuates up and down in a zigzag pattern, but the overall direction is to the downside. When run over five months of historical price data, the robot opened 46 trades only throughout testing, which is very few. This is because of the relatively high target of 100 pips. With this type of strategy, it is better to use lower targets so that the robot can execute and close more trades in a specific time period. The more the trades taken by the expert advisor, the more the chances of making money.

Due to the nature of this trading system, it is best tested in a demo account rather than in back test to determine if it can make money over the long term. There is no question whether or not the algorithm works as designed, and that is the only good result derived from testing the robot in the strategy tester. Since the robot looks at and compares the current spread and the average spread of the current symbol in real time, it might not be possible to replicate this scenario in testing.

The only possible way to make money with this type of trading system is to use the concept of carry trades. The concept can be reduced further to trading currency pairs with positive swaps. A positive or negative swap is a result of the interest rate difference between two currencies making up one currency pair. If the base currency has a higher interest than the quote currency, buying the pair would allow the trade to generate profit to the trader just by holding on to the trade for some period of time. On the other hand, selling the pair would lead to negative profit over time.

To do the carry trade, the user must find pairs with positive swaps. However, this can be a time-consuming process if done manually. There are custom indicators online that can extract the swaps of trading instruments in a trading account automatically for both long and short sides and then display the data on one chart for the user to see. The next thing to do is drop the robot to those pairs with positive swaps.

The most crucial issue to address to make this trading system profitable is the relative amounts of profit and loss when the hedged trades are closed. One possible solution is to increase the target profit a little while maintaining the stop loss amount. The downside to this is that it is possible for price to hit the stop loss of one trade and then turns around without touching the take profit target of the other trade.