The MACD Ichimoku Indicator For MT4 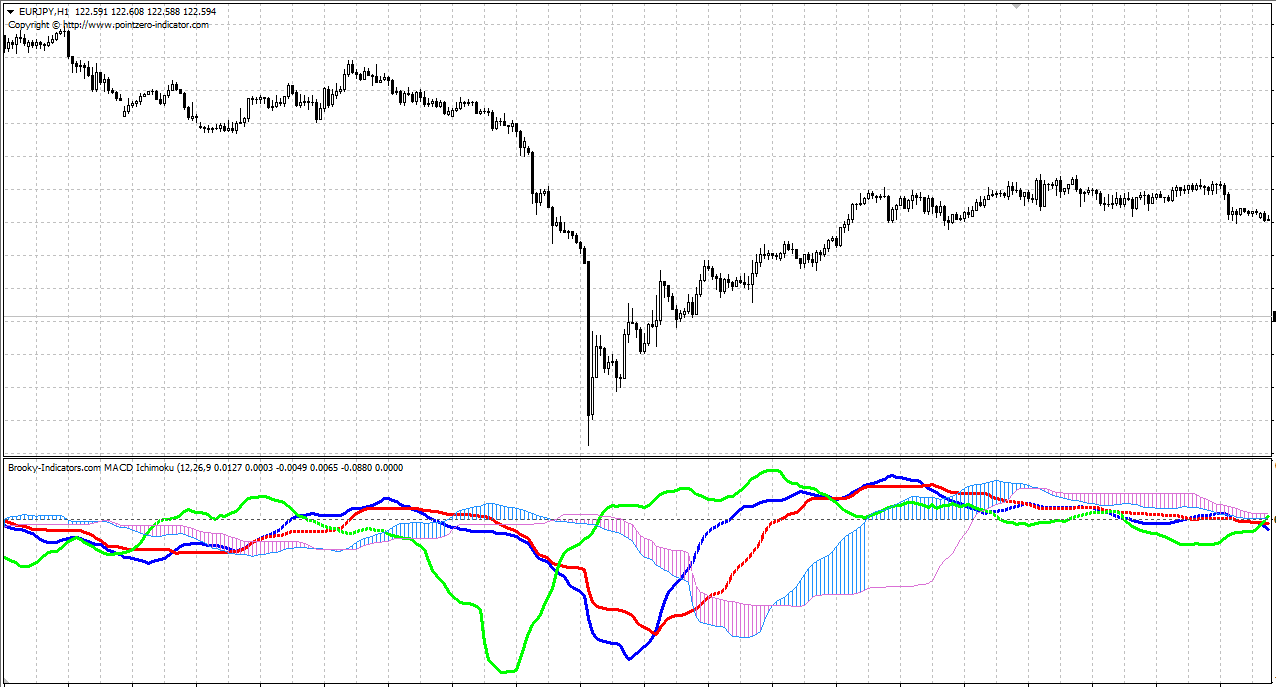 Trading over recent years has seen several thousands of indicators by different developers all over the world with the hope that one of them will be able to become the trading holy grail. However, despite their age, some indicators have particularly stood out among all the others because of how stable and reliable their signals are.

The MACD Ichimoku Indicator For MT4 was built from 2 of the most reliable indicators in the history of forex. Initially, both The MACD and the Ichimoku were used for trading stocks and commodities. In more recent times, a lot of traders now use them in the forex markets.

Some Advantages of using the MACD Ichimoku Indicator For MT4 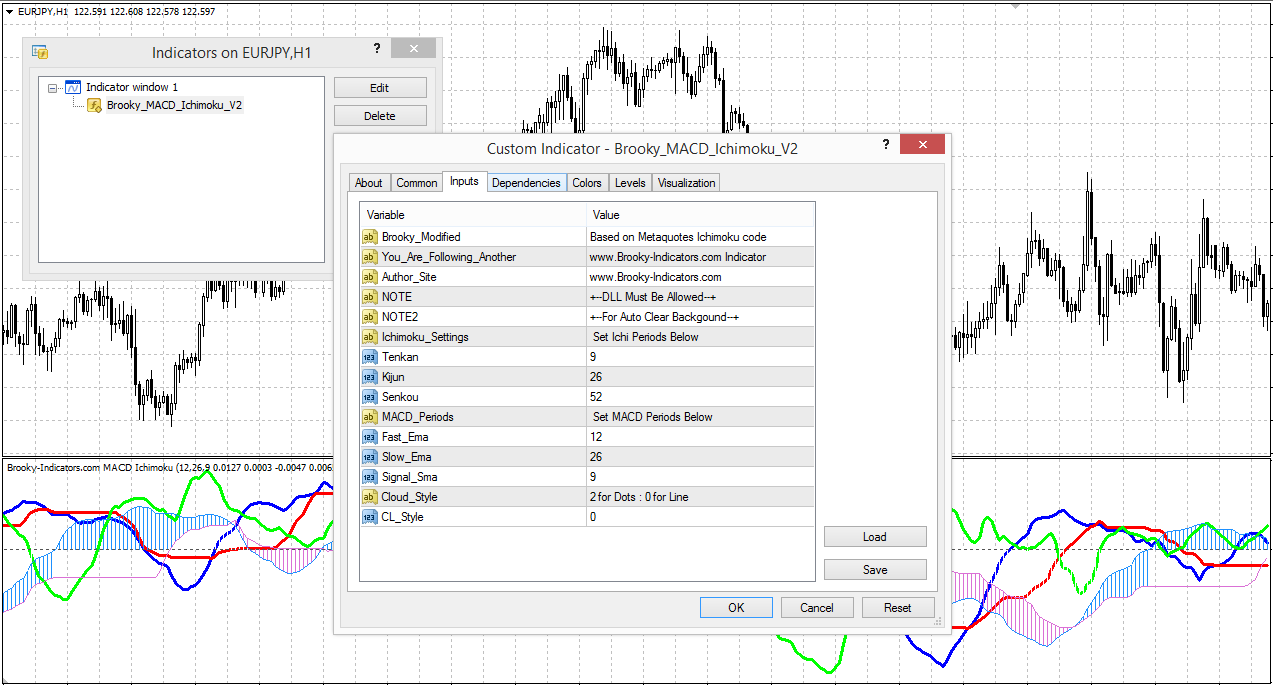 One of the major reasons any trader would want to either let go of their already existing trading system and choose this one or add this one as a part of their trading systems is that the system is very simple to understand, super stable and also reliable. This is because it is built from two of the world's most stable and reliable indicators.

Another reason anyone would use the MACD Ichimoku Indicator For MT4 is that it is a price action based indicator. Simply put, it can tell a trader where major support and resistance are present in the market. Anyone who has previously traded with Ichimoku would almost completely understand this system as Ichimoku also helps a trader identify major support levels and resistance levels in the markets.

The MACD Ichimoku Indicator For MT4 is also regarded as a leading price indicator since it goes ahead of price to try and predict where the price will be in the not so distant future. This can help a trader to align his trades before he gets stopped out or looses massively. 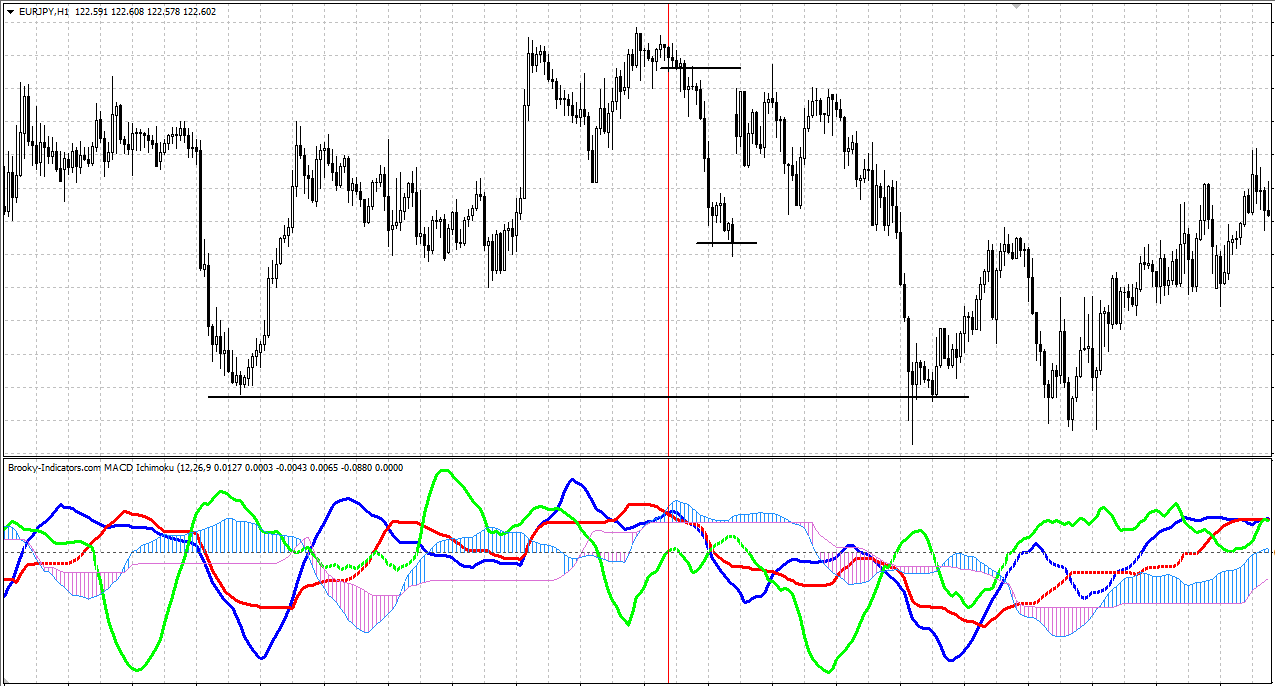 One of the features of the MACD Ichimoku Indicator For MT4 is the Kumo clouds form the Ichimoku indicator. This cloud alone contains so many meanings for those who would undertake the painstakingly steep task of trying to understand it. The width of the cloud can tell when the momentum in price has increased or is reducing.

When the cloud has been flat for a length of time, the market has just created or is approaching a major support or resistance point. Also, the cloud moves ahead of price action by about 26 periods to try to predict where the price would be within the next 26 sessions. Hence if the cloud twists, it is likely that price will change direction to the direction of the shift.

Also, most tmes, the Ichimoku cloud tends to flatten at the 50% Fibonacci price ratio which likely means that at the point where the cloud is still flat, a retracement of a previous move may end or become very slow to a reversal and trend continuation. 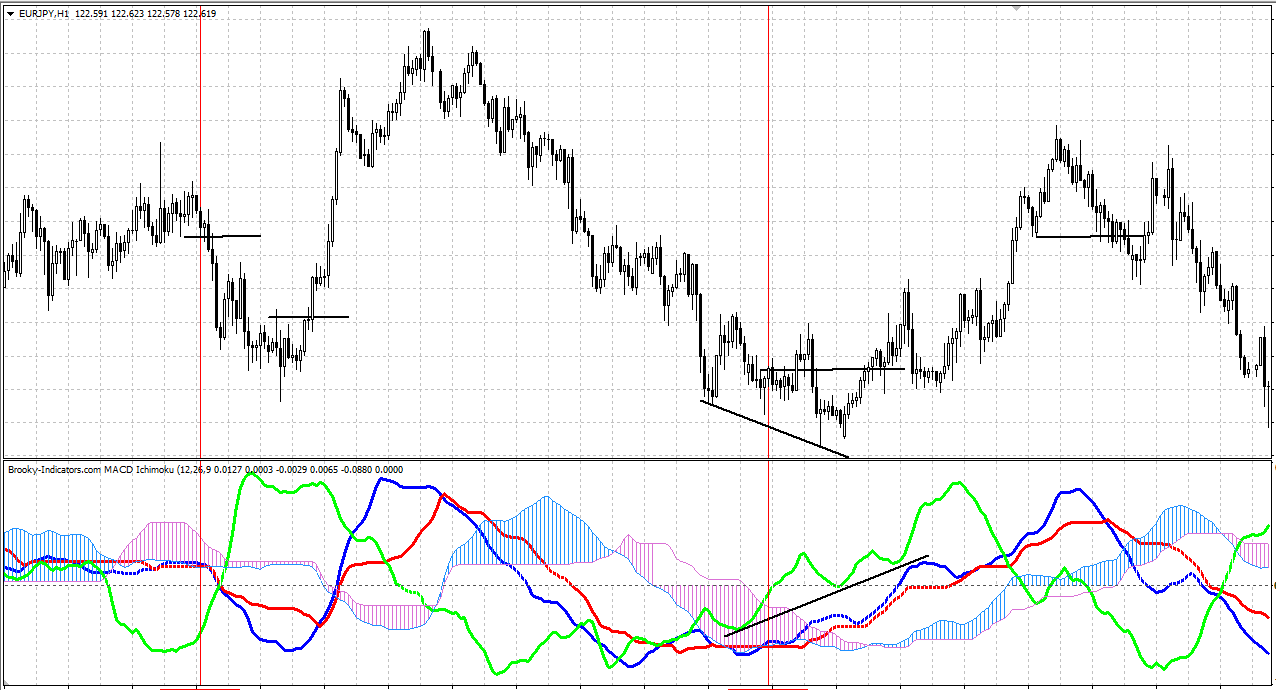 One way to interpret the MACD Ichimoku Indicator For MT4 would be to watch for when the red and blue lines signifying the Tenkan-Sen and Kijun-Sen cross price to a new direction. it becomes an opportunity to immediately take trades in that new direction. When both lines are above the cloud, it means the trader should be buying. When both lines are below the cloud, it means that the trader should be selling.

Another important point to note is the MACD Ichimoku Indicator For MT4 can help a trader identify when divergence exists in price and when the price will not keep traveling in a particular direction for much longer. The green line called the Chikou Span which is originally part of the Ichimoku trading system is used to identify these divergences. 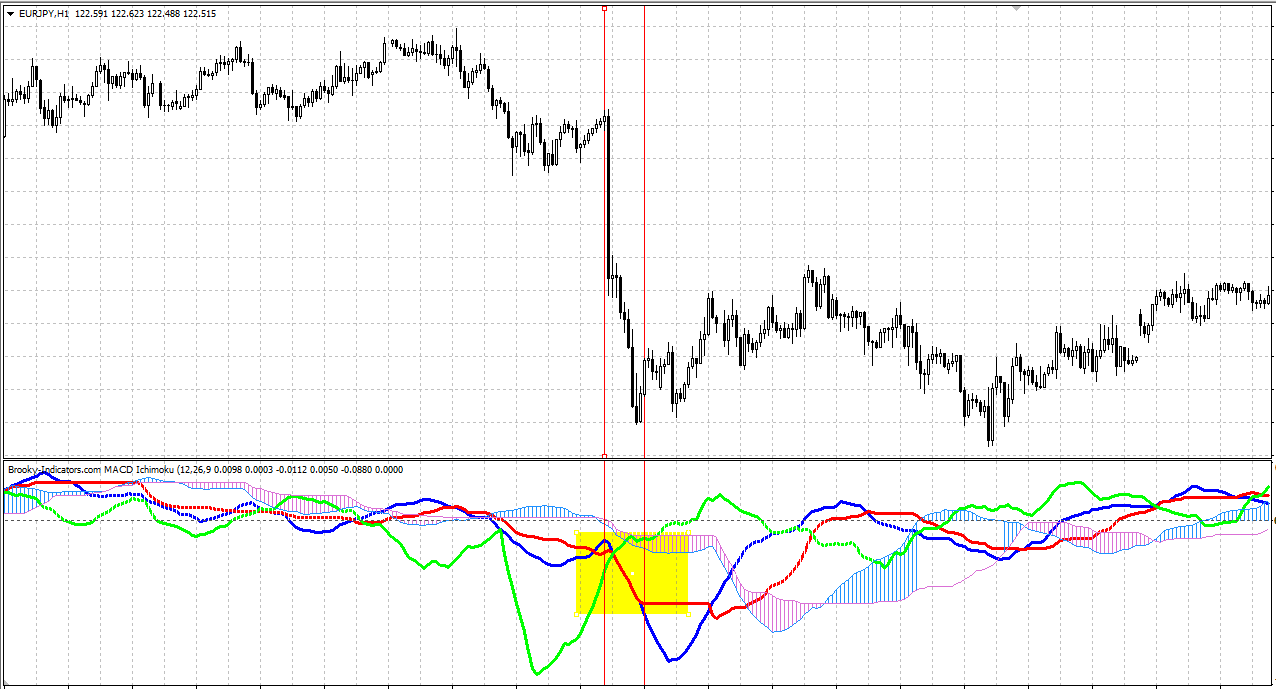 Also when using the MACD Ichimoku Indicator For MT4, flat clouds for a very prolonged period indicates that price actions might be caught in a range and that it should not be traded at the moment. Another cloud trick is that when the clouds become tiny and the red, blue and green lines start to cluster together, it means that there is likely a price compression happening. Price compressions usually happen right before very big moves in the price of a currency or trading asset.

Lastly, the MACD Ichimoku Indicator For MT4 comes with its own window so that traders still have enough room to run their own analysis and read the charts without any distracting lines and colors. 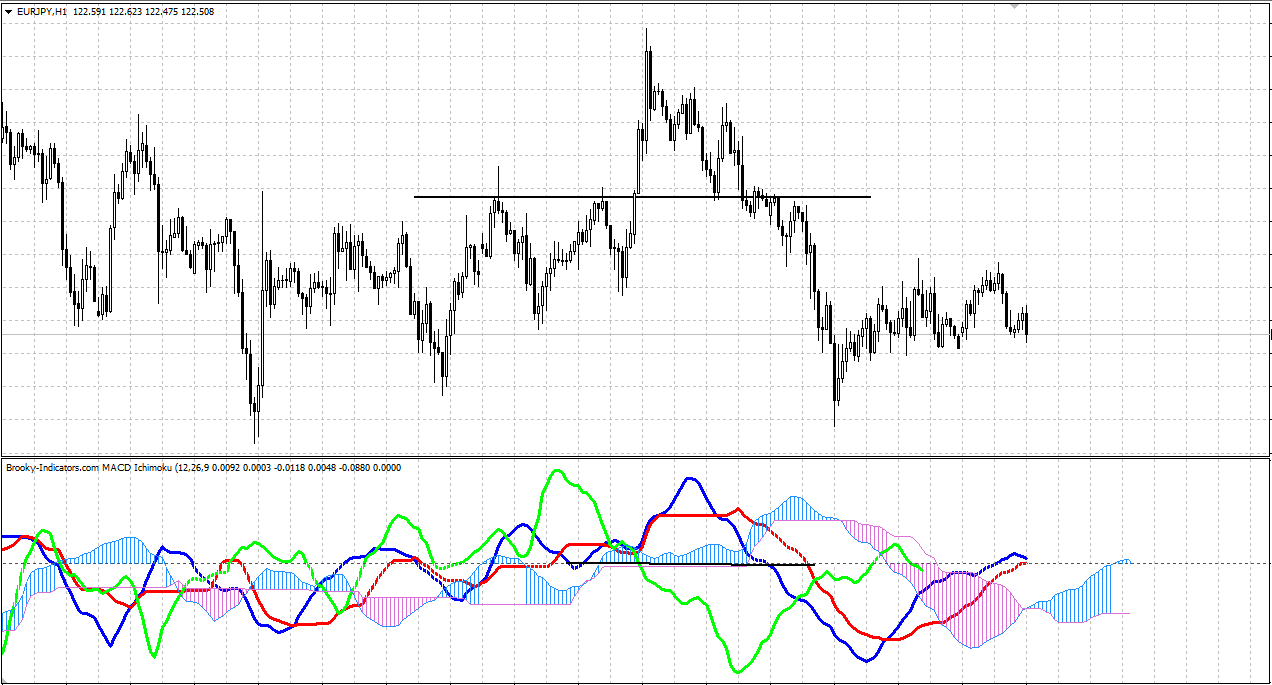 A very high probability trade pattern using the MACD Ichimoku Indicator For MT4 would be to only take trades where the crosses between the red and blue lines happen within the cloud since these have a much higher probability of working out because of the immediate support and or resistance directly above the red and blue lines when the moves developed forcing them in the other direction.