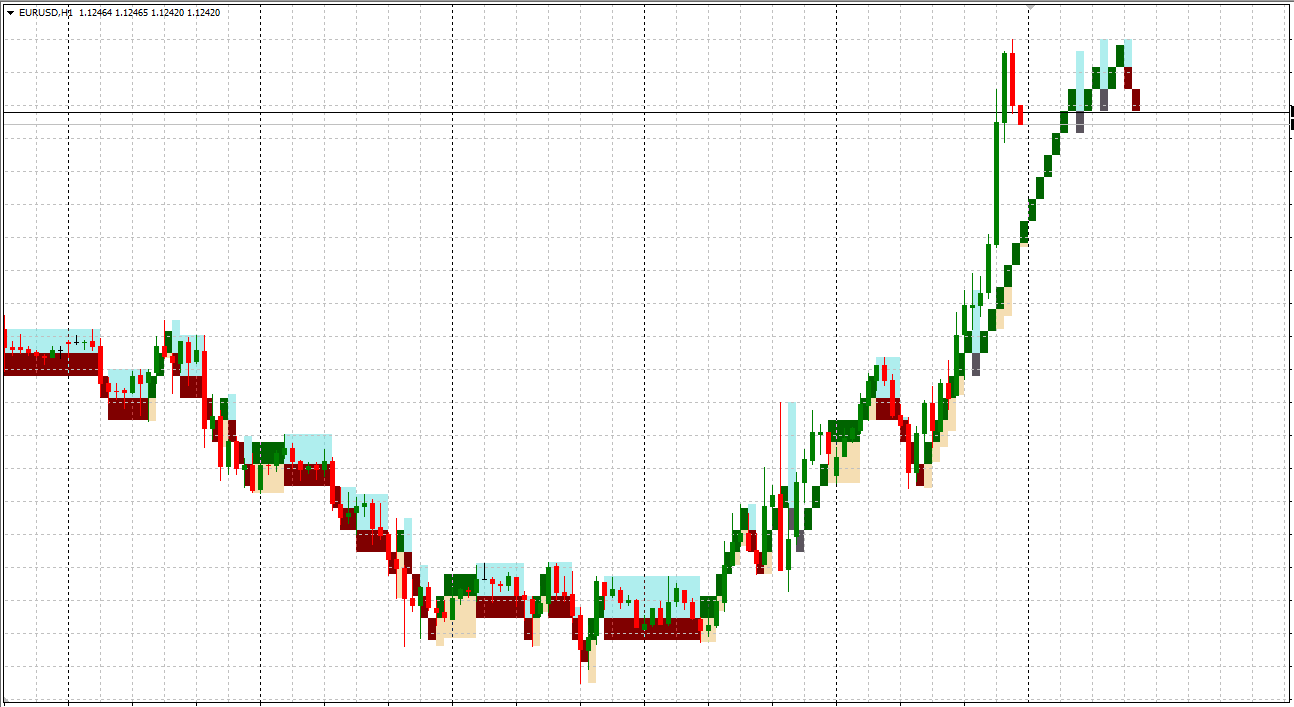 One of the advantages of using the RenkoShade2 Draws Renko boxes in normal TF Indicator For Meta Trader 4 is that without any additional efforts on the part of the trader, it can draw full Renko charts on the trader's current platform right over the trader's regular candlestick charts. This way, it presents a dual view of both the regular candlesticks and the Renko charting candlesticks to the trader so the trader can see both of the different methods used to represent the price to two different sets of traders right on the same charts. 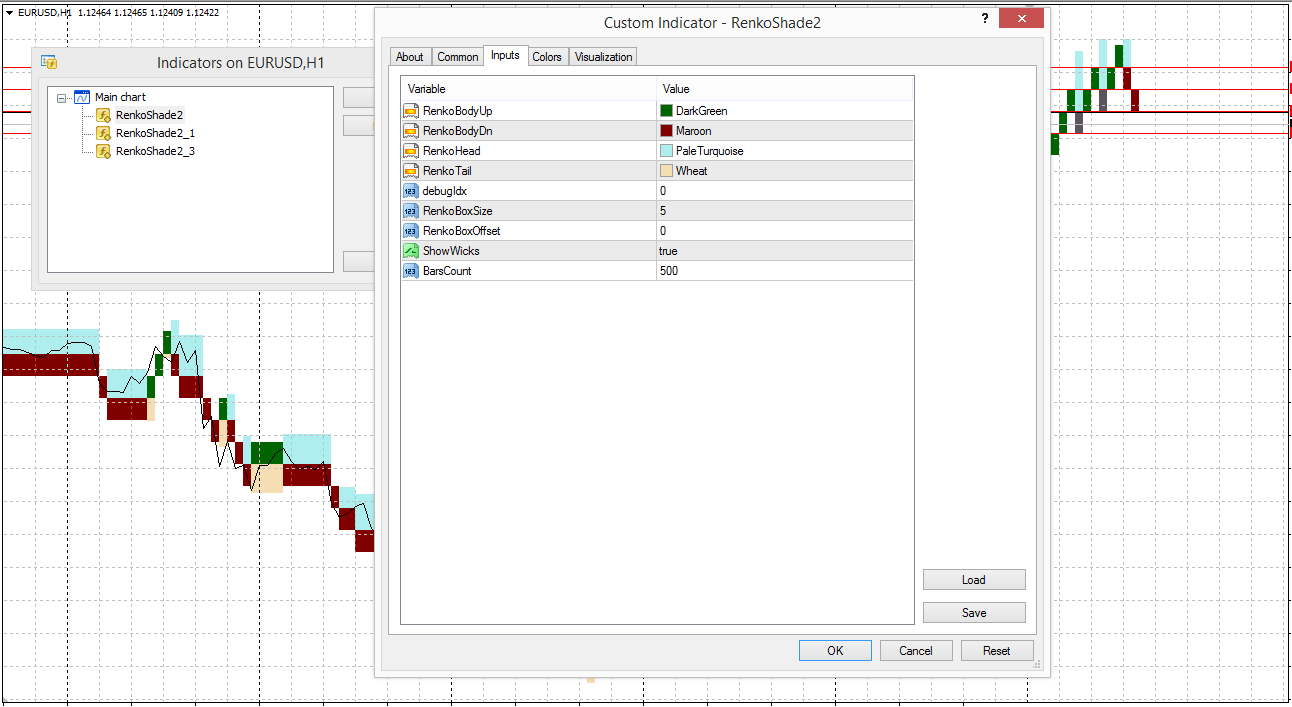 Another benefit of using the RenkoShade2 Draws Renko boxes in normal TF Indicator For Meta Trader 4 is that can be used exclusively for Renko box trading right from the trader's regular charts. This means that a Renko trader would very conveniently set up this indicator on the chart and trade the charts like he would trade a normal Renko chart. The trader would have to change the type of chart to line chart from the regular chart settings in order to create room on the chart and remove the regular candlestick charts completely if the trader wishes to. 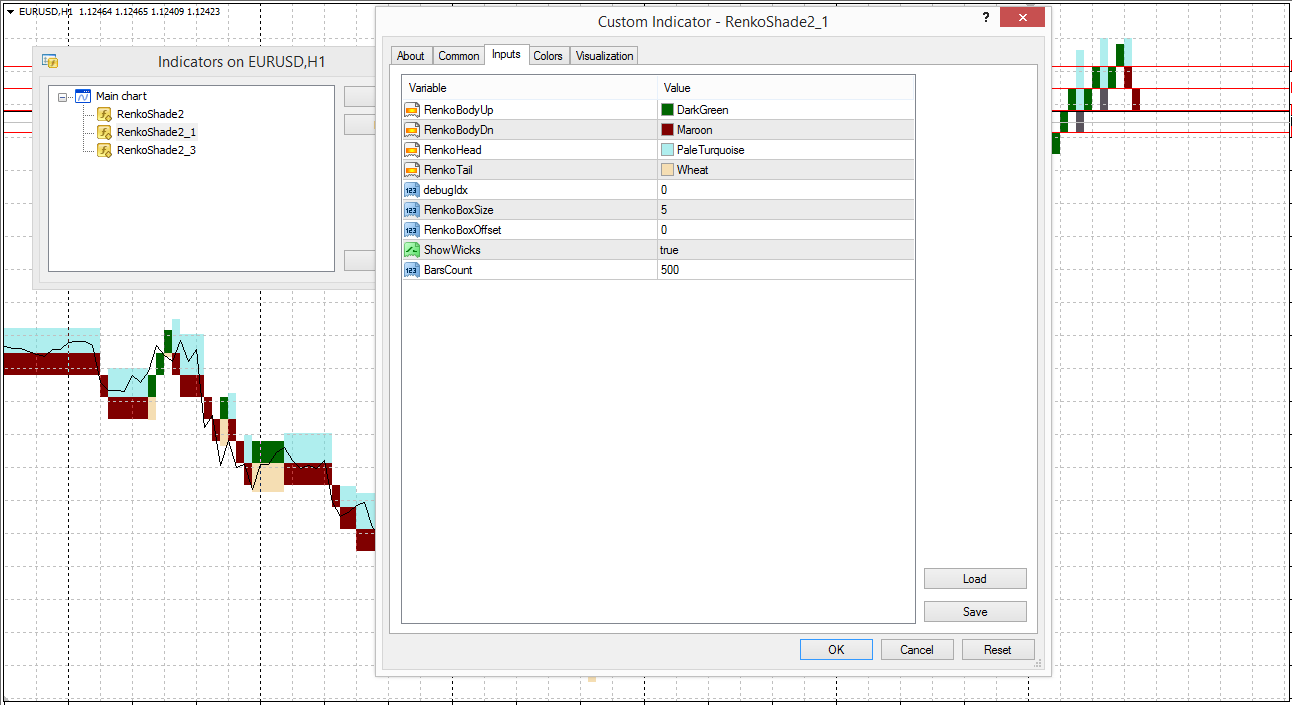 This means that the trader can immediately gain all of the advantages of using the Renko charts right from their regular charts without having to pay another chart provider for it and the best part is that, all the indicators that make the Meta Trader 4 charting platform the favorite for traders will be available to the trader who chooses to trade their Renko system on this platform as then they can use as many other indicators as they need to improve their trading systems and also to create even better systems still based on their trade ideas.

Also, using the RenkoShade2 Draws Renko boxes in normal TF Indicator For Meta Trader 4 offers the Renko trader all the features they would get from using a charting platform that they would need to pay for, like fully adjustable Renko box sizes and all the other box parameters that Renko boxes usually have. 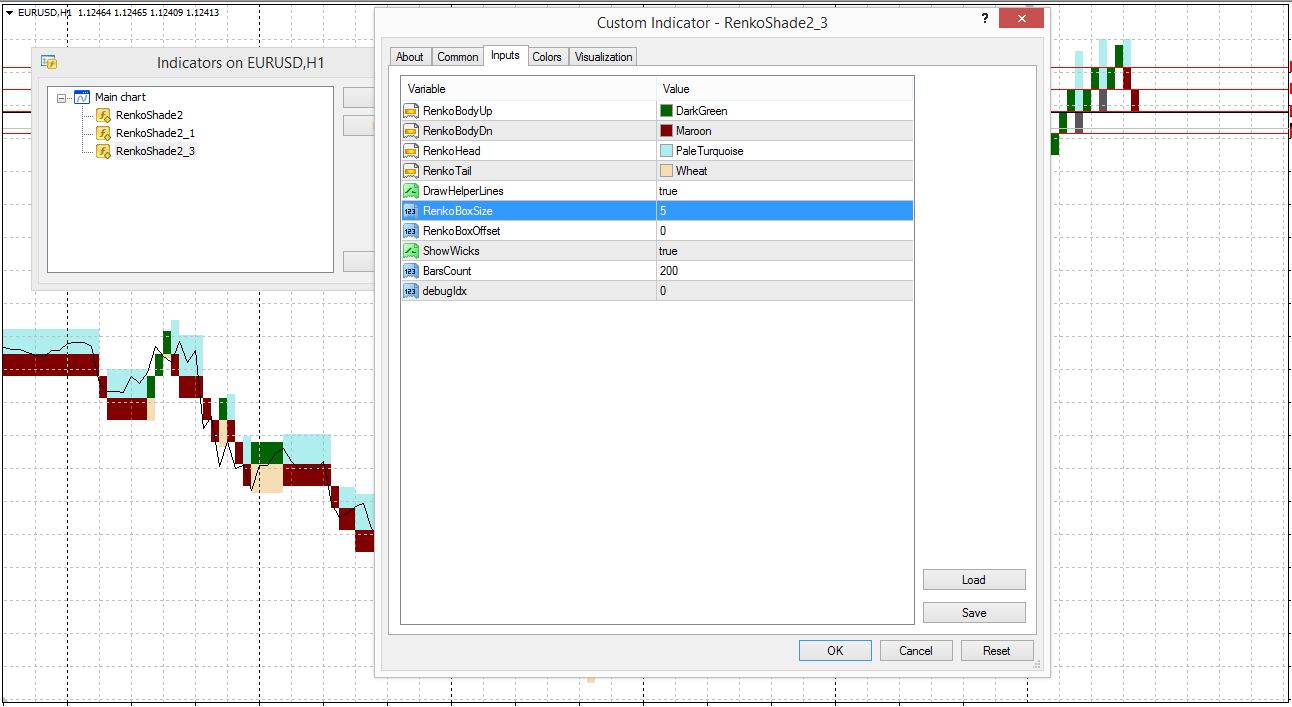 This will greatly benefit the Renko trader since a lot of traders that use the Renko system have complained that they do not have a stable indicator that can help them trade Renko on the meta trader 4 platforms whereas the charting platforms that offered Renko charting in the past didn't have all the free indicators that a knowledgable trader would need to combine with his or charts to improve their systems the way they really wanted to.

This is what really makes using the RenkoShade2 Draws Renko boxes in normal TF Indicator For Meta Trader 4 very useful as the indicator can quite easily combine with other indicators that a freely available on the Meta Trader 4 charting environment to help the trader create a very efficient charting experience and even a better trading system if they are knowledgable enough and know exactly what indicators to combine, although all these can be fixed by a little research on the part of the trader. 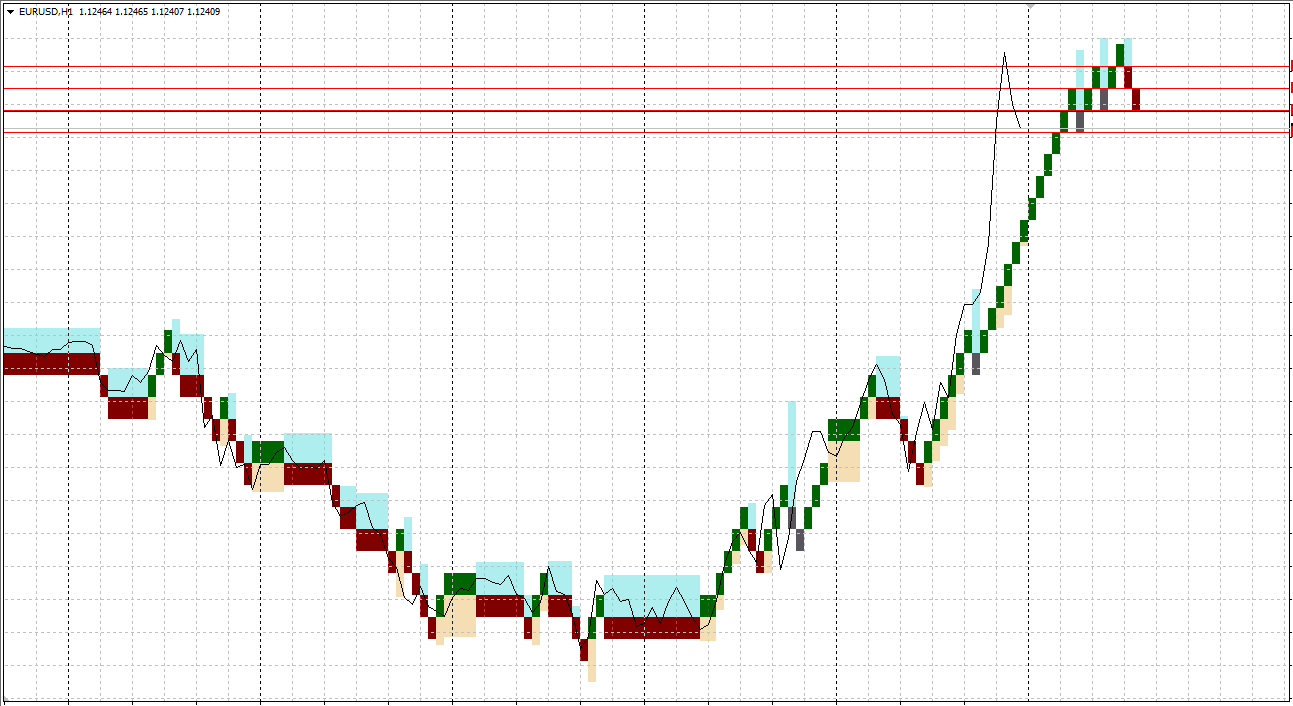 Even non-Renko traders can benefit from using the RenkoShade2 Draws Renko boxes in normal TF Indicator For Meta Trader 4 as the indicator can be combined with other systems for a very nice and profitable system.

For instance, the Renko charts have been known by their ability to keep traders in the charts long enough during a trending market situation and only change direction when the trade is over, thereby allowing the trader to stay in on the trend without fear that price will turn on him or her as the indicator can very quickly show price what is happening during any stage of a trend. This makes understanding and working with the trends very easy as the trader can then hold on to a trend and ride it till the trend is done. 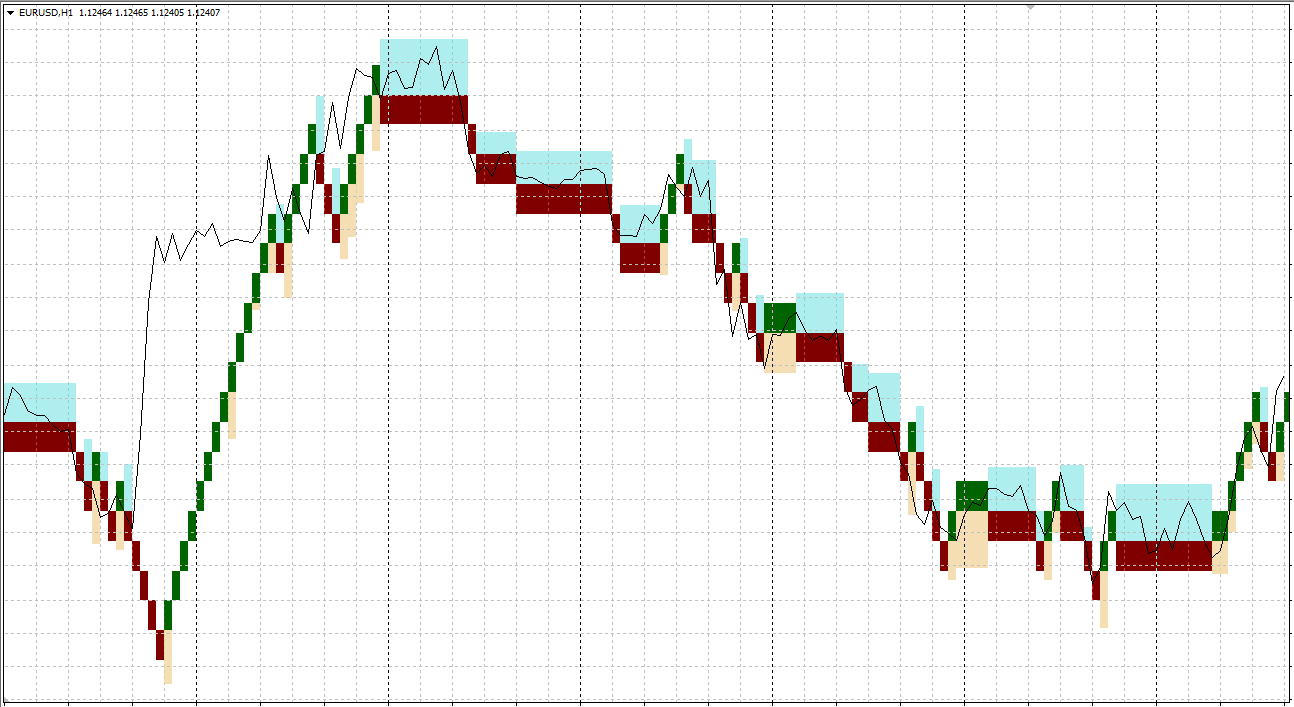 This can serve as a great addition especially to traders whose present systems do not have the means to keep such traders in the markets long enough to make substantial profits from the markets.