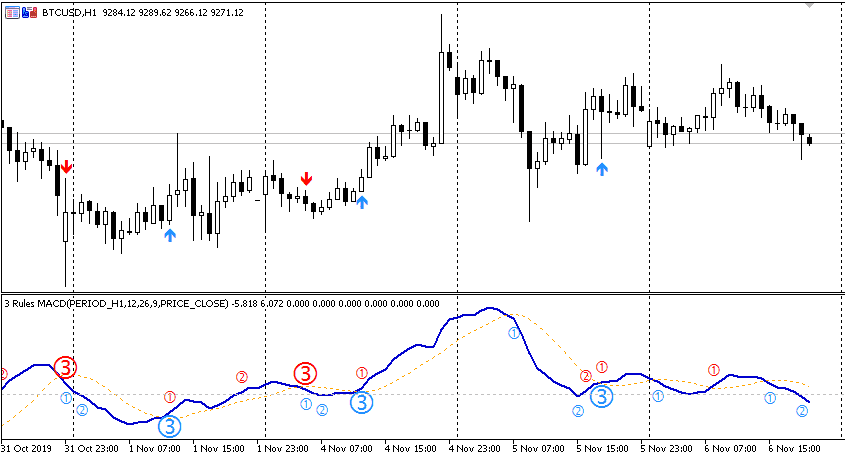 I am pleased to present to you yet another fantastic indicator known as the 3 Rules MACD Indicator MT5.

The 3 Rules MACD Indicator MT5 is a major upgrade to the self-standing MACD indicator. You will see why I say so, therefore I shall present you with more details that confirms this view.

Advancing, with integrity, is good virtue. The MACD when it came out was a huge revolution in trading! It offered many benefits to institutional traders. It advanced many trader's abilities to new levels. However, as time progressed over the years, the drawbacks in the MACD indicator became increasingly more evident! Therefore, as an attempt to overcome these drawbacks the 3 Rules MACD Indicator MT5 came into existence. I touch on its usability and advantages but first I would like to talk more about the MACD indicator itself.

The Moving Average Convergence/Divergence indicator is one of the popular indicators. It is known as the MACD indicator for short.

The MACD indicator is commonly referred to as an oscillation indicator which provides insight into the momentum of a trend but the signals which comes from it tend to be mostly trend-following based. Meaning that the MACD is a lagging indicator. Even so, it has brought great success to many traders across the world and it can surely bring you success too if you were to use it correctly.

The composition of the MACD indicator consists mainly of a signal line that is computed by means of the difference of two Exponential Moving Averages (EMA) with periods of 26 and 12. Thus resulting in a nine period EMA MACD line.

One of my preferred ways of trading using the MACD indicator is to use it in conjunction with two EMAs with respective periods of 26 and 12. This setting for me has worked well due to the fact that this is the best way to calibrate the settings of the two EMAs on the chart with the default settings of the MACD. I have an image below showing these settings clearly. 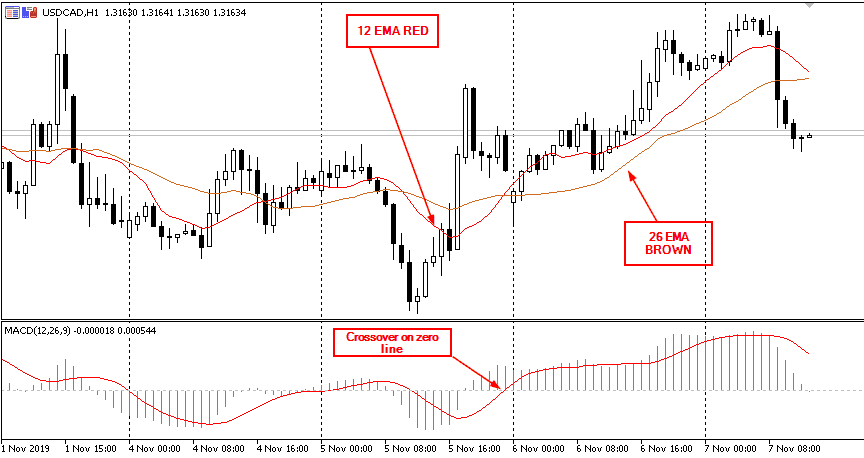 The image I have above is a screenshot of the USDCAD trading pair taken off the one-hour time frame with the MACD oscillator indicator attached to the bottom of the screen. I also have the 12-period (red line) and 26-period (brown line) attached to the main chart.

The main idea with using the MACD indicator is to trade whenever the MACD line crosses over. Crossover trading is a safe way to trade, I have to admit but it is a strategy that follows a trend because the MACD is a trend following indicator. So when you trade like this, it often causes many traders to leave money on the table.

If you turn your attention to 5 November on 2019 on the chart above, you will see that there was a crossover made by the MACD indicator. That crossover was from the downside to the upside thus giving you the motivation and signal to buy the USDCAD trading pair.

However, when you look to the left, you can see that price has already advanced with a big move beyond the two EMAs. Upon executing the buy trade with the MACD crossover, you will see that we are basically playing catch up to the market because we have entered very late! Hence why it is bad practice to rely solely on trade-triggers given by indicators. You need confirmation signals that puts you ahead of the pack. 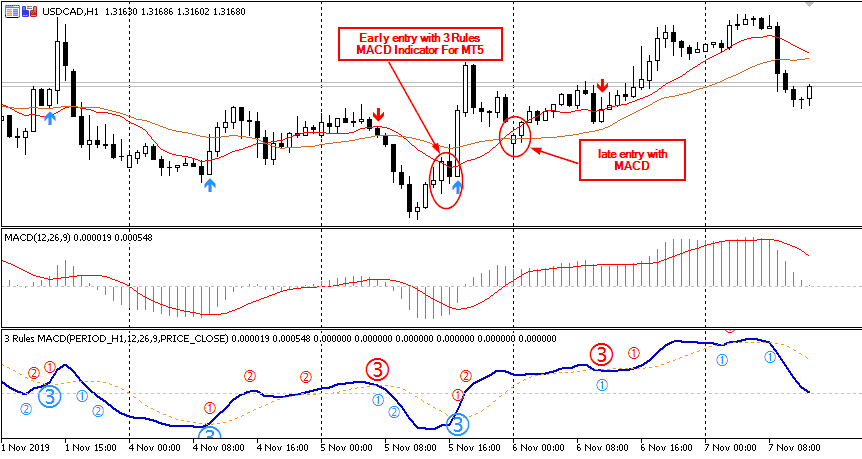 I am sure by now, looking at the above screenshot, you can already notice the major advantage which the 3 Rules MACD Indicator For MT5 enjoys over the standard MACD indicator.

The 3 Rules MACD Indicator For MT5 will simplify your trading with fruitful benefits such as saving you time in your analysis as well as giving you signals for early entries on reversal or trend changing trends.

In the previous section where I simulated a buy trade on the USDCAD pair, I was met with a major drawback due to the fact that my entry with the MACD was too late into the trend. The sooner the better you get into the inception of a new trend, the better. This luxury, however, is not afforded to me when using the MACD indicator alone. That was one of the main motives for creating the 3 Rules MACD Indicator For MT5. It was created to help you overcome late trade entries.

The 3 Rules MACD Indicator For MT5 is twofold relative to its visual metrics. At the bottom of the chart it has its own version of the MACD which is an upgrade or huge modification to the normal MACD indicator. Then within the main chart there are signal arrows which serves the purpose of providing conspicuous visual cues for all the buy and sell trading opportunities that come with the market's daily progression.

To elaborate some more, for all your buy opportunities just focus on the blue visuals: the number three and the blue arrow pointing upwards. So for instance, after the market has exhausted its selling power, the market might consolidate or reverse. As for the latter, the 3 Rules MACD Indicator For MT5 might print out a number "three" in blue according to its set algorithm. Furthermore, whenever the 3 Rules MACD Indicator For MT5 prints a blue up-pointing arrow in unison with the blue number three, then this is a solid cue for you to take buy trade. Of course, the opposite or reverse is also true for selling opportunities.

If we turned to the buy opportunity we identified earlier we were considerably late on our entry using the MACD alone. Fortunate for us, that entry came after the market made a deep pullback: which does not happen often enough. So in that case we did not lose out on much. However, if we took the same trade using the rules specified above for the 3 Rules MACD Indicator For MT5, we would have wrapped up or closed our buy trade, much earlier, with a 44 pip gain collected within just two-three hours!

I am not here to shame the MACD but you have already gotten a taste of the superior nature of the 3 Rules MACD Indicator For MT5.

Trading is suppose to be fun and simple: the 3 Rules MACD Indicator For MT5 promises much in offering those aforementioned benefits. So there is no excuse for you to be left behind in the market.

It has been noted that by solely focusing on receiving market cues from the MACD indicator you will leave a lot of money on the table.