What is the Average Speed Indicator For MT5? 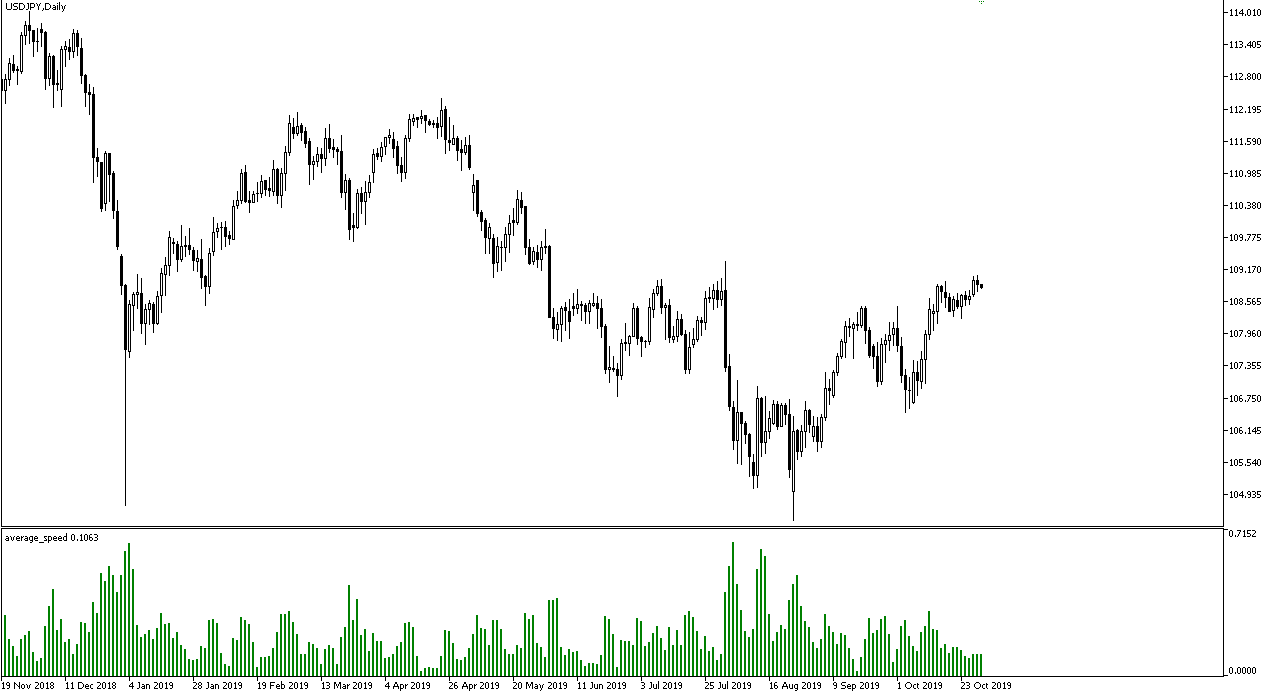 The Average Speed Indicator For MT5 is an indicator that opens up in the bottom window of your trading platform. The indicator is represented by a histogram, showing rising and falling speed, or in the case of the markets, rate of change. This allows the trader to see things in the price that aren’t necessarily apparent to the naked eye. With this, underlying volatility and momentum can perhaps be picked up on, showing that there may be continuation in the recent move. By understanding the speed of a move, a lot can be inferred by that information, as although the candlesticks can show distance, unless you are watching the market in the process of the candle being printed, it is unlikely that you will truly understand the speed and momentum of the market.

Average Speed for MT5 indicator is based upon a mathematical formula coined by none other than Galileo, as a way of measuring speed of an object. The indicator uses a variation of the original formula that was simply velocity = distance/time. This formula in the indicator takes the ‘time’ part of the equation as minutes, as using seconds wouldn’t produce enough information to make the calculation useful. This is especially important in longer-term time frames and slower markets overall, as the markets won’t always move very quickly, and therefore it would cause continuity issues with the indicator. By using a standard minute based calculation, the results are just as reliable during European trading as Asian, or in the height of the trading day as the rollover at the end of the day.

The calculation of speed in the Forex markets

The calculation of speed in the Forex markets is done a bit differently than simply measuring the speed – or velocity – of an object in the physical world. Obviously ‘distance’ will be based upon units of price instead of meters, feet, miles, etc. In this case, we use pips. The ‘time’, as mentioned previously, is measured in minutes in order to get enough information. When using seconds, there is sometimes a tendency to produce no results, especially in the slowest times of the day, as price may not move for several seconds. Also, there is the issue of variable spreads causing too much noise in this setting.

In the Average Speed Indicator For MT5, the calculation is done using Arithmetical Mean, which is a process where you can get a true average of price movement, as this allows a mathematical filter to be applied, while preserving the integrity of the results. This allows for a more stable set of results, almost as a ‘smoothing mechanism.’

How to use the Average Speed Indicator For MT5

One of the most common ways to use the Average Speed Indicator For MT5 is as a confirmation tool. What is meant by this is that the idea of a move higher or lower with strong momentum, measured by the speed or rate of change from pip to pip, should signal underlying demand for one of the currencies in the pair you are trading. For example, if you are short the EUR/USD pair, and it continues to fall with a rising indication in the Average Speed Indicator For MT5, this could signal that the market is ready to continue falling.

An example of how to use this indicator is shown on the chart below. The purple arrow shows where speed started to peak as the market was starting to fall. This shows that the underlying speed of that candlestick falling was much stronger than many of the others, although the speed had been increasing. Because of this, it shows that in this case, there was a lot of movement in favor of the Japanese yen, suggesting there was demand. As you can see shortly after, the market continued to fall from there as denoted by the red arrow. 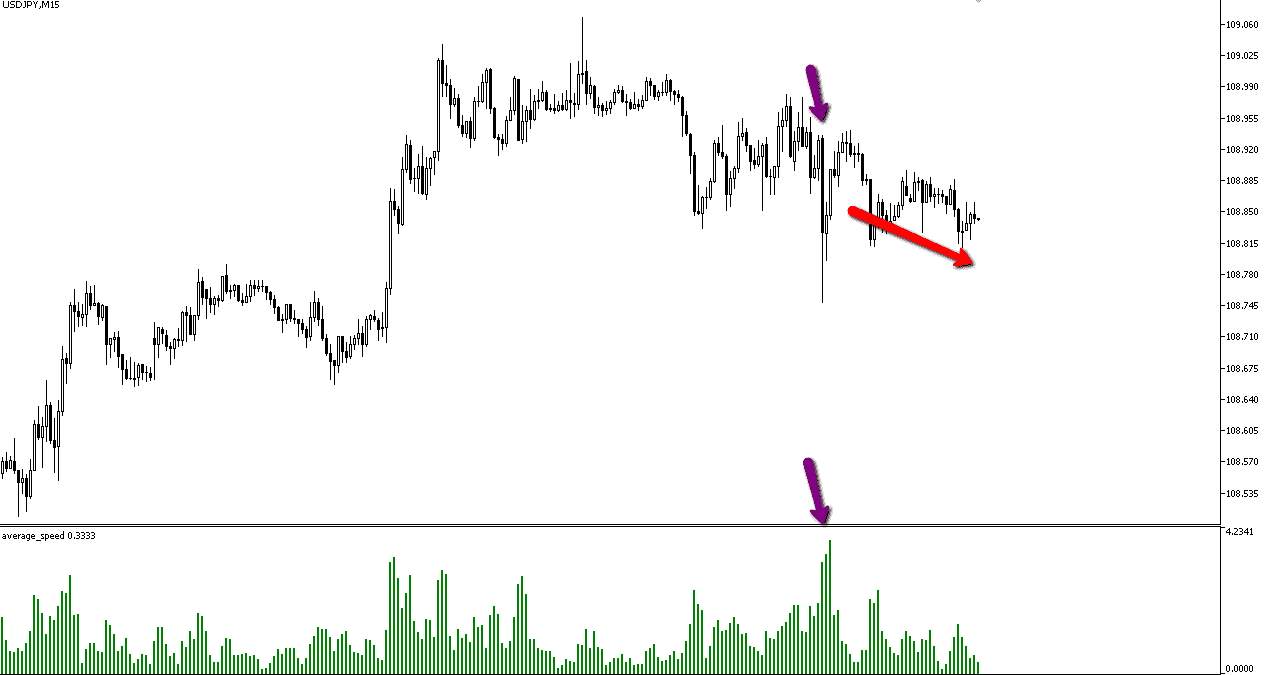 Sometimes, the indicator will not only give you a ‘heads up’ on a potential continuation of a move based upon underlying demand, but the Average Speed Indicator For MT5 can also be a bit of a filter for potential noise. This is just as important as giving a potential trade, as preservation of trading capital is crucial for long-term success. The chart underneath shows an example of how this can happen. The red arrows represent a potential buying set up in the GBP/USD pair, as the market showed quite a bit of strength. However, when you see the Average Speed underneath is lower than the previous spike, and that the next candle is slow internally, this shows that you could be looking at a slowing of overall momentum. This is a sign of slowing demand, and as you can see the market went sideways for a short while, before falling from there, reversing the move to the upside and falling 100 pips. 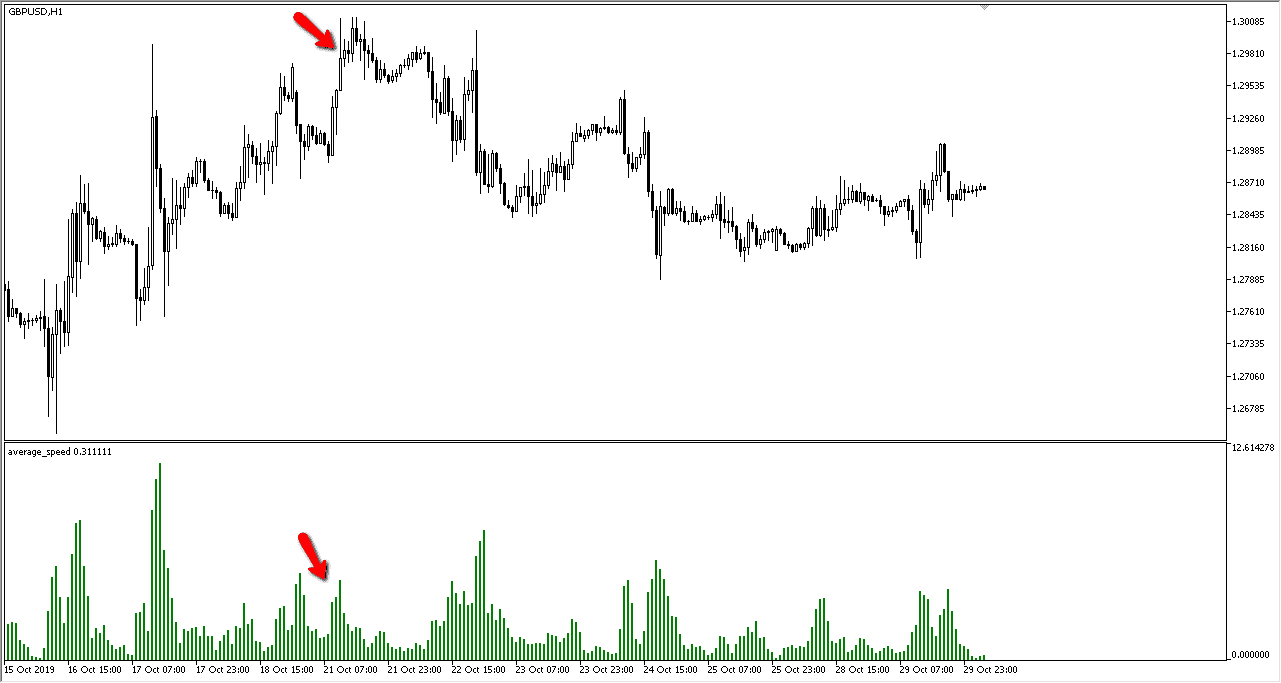 Although the Average Speed Indicator For MT5 is very important and insightful, it isn’t a ‘magic bullet’ for profits. After all, the indicator simply measures how fast the market is moving from pip to pip. You should keep in mind that the indicator won’t be that useful during the volatility that can happen during a news announcement, as an example. After all, there will be an increase in overall speed due to liquidity issues, and algorithmic trading taking over the market temporarily. In times like this, you will need to ignore a massive spike in measurements.

Beyond those issues, the Average Speed Indicator For MT5 only measures speed. If you are seeing a pickup in speed that leads directly into support or resistance, it may not matter. The speed increasing may actually work against the ability for a market to break resistance at times. It is because of this that you may actually be better off waiting to see a breakout and increased speed, not looking to anticipate the breakout.

The indicator also can be a bit difficult to use on higher time frames, as although it can be insightful, the momentum might already be expended by the time you get the close of the candle on something like a weekly chart. On a 5 minute chart, then you have the likelihood of more momentum following. This can lead traders to use it more for short-term trading, and therefore isn’t necessarily the best indicator for those looking to use the markets for longer-term investing.

The Average Speed Indicator For MT5 is probably best thought of as a confirmation tool. This indicator can often tell the underlying story of a candle, but at the end of the day it isn’t enough to place a trade on. It should be used with other factors such as support and resistance, your favorite candlestick patterns, or perhaps an indictor that you follow. The ways that this indicator can be used is essentially limitless, and with a little bit of experimentation, it makes a great filter to watch out for false breaks. The measurement of speed is important, but it isn’t the only thing. Being aware of where you are on a chart, and whether or not velocity is being influenced by a temporary factor is important. However, if it confirms a move, it can be a powerful addition to an existing trading system or methodology.