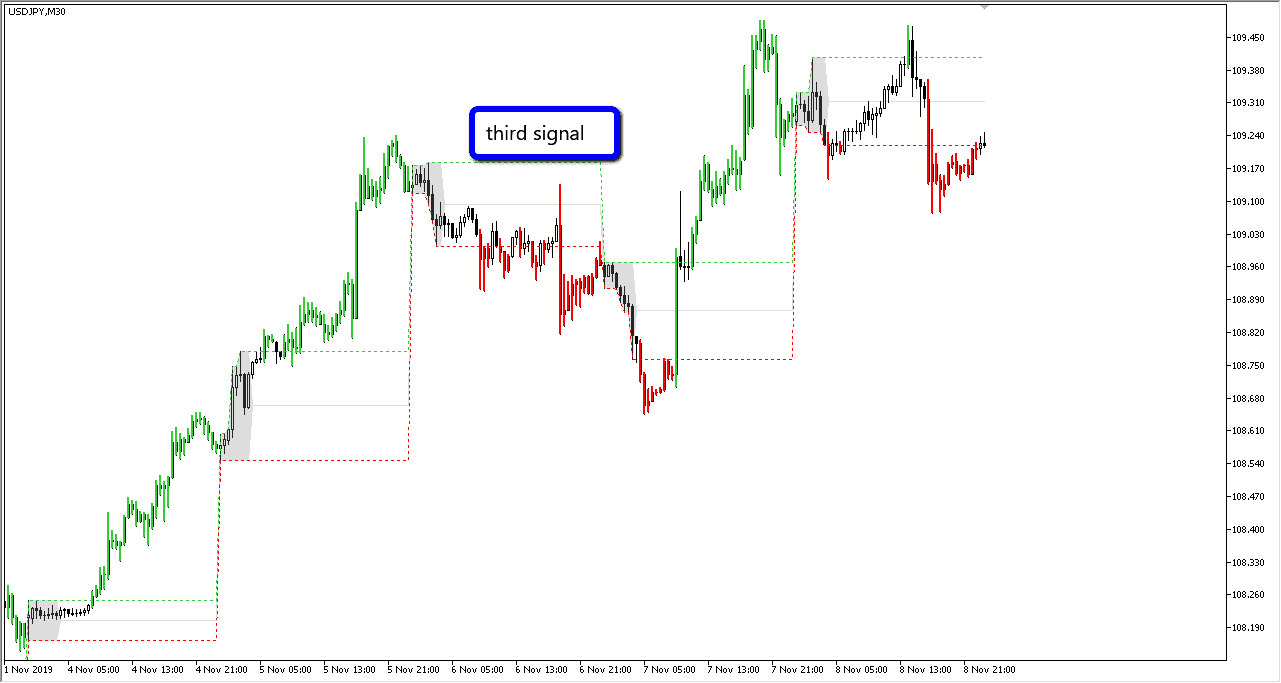 The Intraday Channel Breakout Indicator For MT5 is an indicator that you can add to your trading toolbox that will signify when a channel of consolidation has been broken. Intraday channels happen quite often in the markets, and this indicator will keep you abreast of when it’s time to take a move be it to the up or downside. The indicator is based upon momentum, and as a result it is to be used in specific situations, much like any other indicator or potential trading system.

The indicator creates a gray box for the channel, and then suggests where the consolidation should continue. It will give you a couple of levels that could be broken either to the upside or down, and then overlay thick red or green markings on top of the candles suggesting a buy or sell situation. This is based upon the idea of markets will sit still for a while, and then pick up bits of momentum from time to time. This is trying to capture breaks of support or resistance in order to take advantage of quick moves.

It should be noted that the Intraday Channel Break out Indicator for MT5 is specifically for intraday trading. Trying to use it on higher time frames is certainly not going to work, as it isn’t adjusted to those particular specifications. Besides, trading higher timeframe support and resistance is something that can be done much easier as the levels become much more obvious on higher time frames.

How to use the Intraday Channel Breakout Indicator For MT5

Using the indicator is rather simple, as it doesn’t have a lot of moving parts. The indicator will determine when there is rather significant stagnation or consolidation in the marketplace, forming a gray area that will sit underneath candlesticks on your chart. This background suggests that there is a lot of churn in the background, as buyers and sellers struggled to take control the marketplace. There are after enough time, dashed lines that extend from this area to form both buy and sell signals. By measuring force and price, the indicator will show when buyers or sellers have broken through what has been a relatively reliable support or resistance level.

The concept is that in a breakout to the upside, traders that had been short of the market will be trapped, forcing them to cover their short positions. This only adds more fuel to the fire as far as buying is concerned, and as price reaches higher to fulfill the orders, this becomes a longer-term self-fulfilling prophecy. Obviously, the exact opposite is true, meaning that once the indicator breaks through support, the buyers will then have to cover their positions adding more negativity to the marketplace.

One of the most basic ways to use this indicator is to simply follow the breakout and trade in that direction. For example, as the indicator breaks above the resistance line on the indicator, the indicator then puts a green line above the candlesticks, showing that it is an impulsive and stronger candlestick as far as momentum is concerned. At that point, the trader simply buys the currency pair and puts a stop loss on the other side of the channel, which is denoted by the dashed red line. That being said, if you choose to tighten your stops up a bit in order to cut back on potential draw downs, some traders will use the gray line which is 50% of the overall channel as a place to put their stop behind. That being said, this does increase the possibility of being stopped out early on a sudden spike or drop in price.

As far as selling is concerned, it’s the same process in reverse. A red dashed line being broken to the downside will have the indicator painting red on top of the candlesticks, and of course has traders jumping in to sell. In this scenario, a stop loss will be placed either above the dashed green line, or the gray line in the middle of the channel that had just been broken. 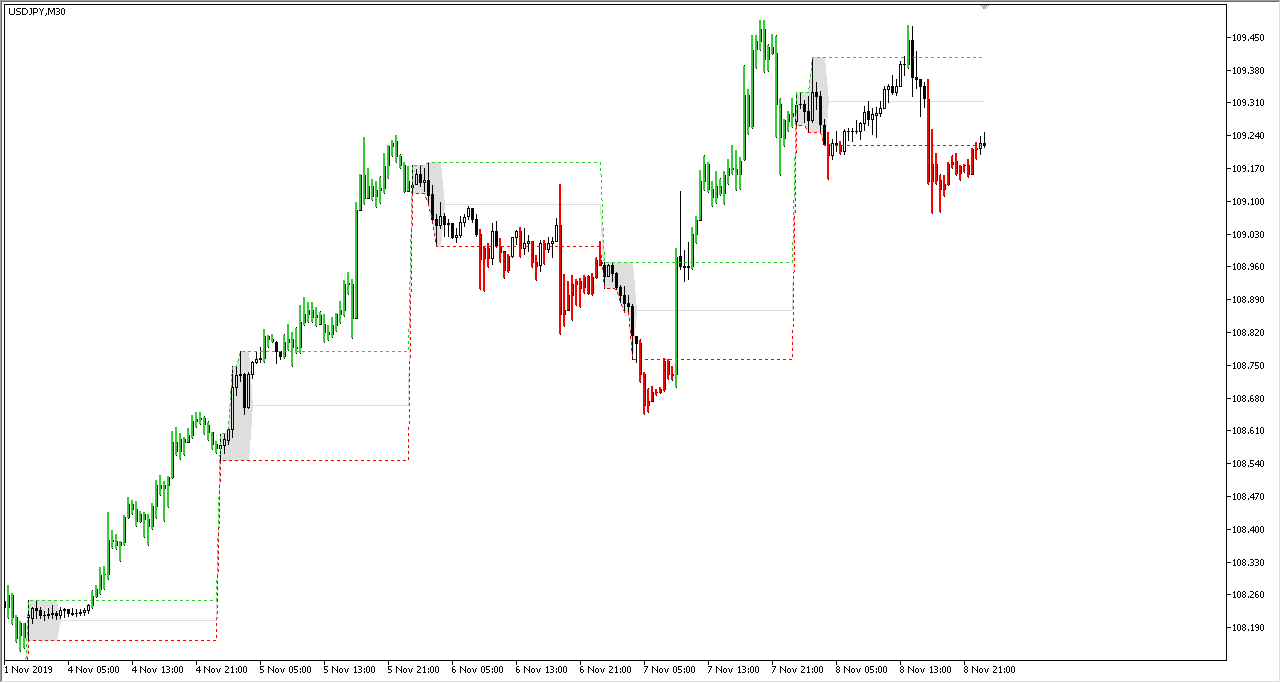 As with any indicator, the Intraday Channel Breakout Indicator For MT5 should be tweaked for your uses. For example, on the attached chart you can see that the third signal, which was a sell signal turned around in the middle of the breakdown to slice through the middle of the consolidation channel, meaning that had you put your stop loss halfway through the channel, you would have been stopped out, only to watch the market move in your direction. That being said, if you were to take that trade, the market has been trending higher so knowing that it is a countertrend trade, you could have widened your stop, meaning putting the stop loss on the other side of the channel, keeping the trade alive long enough to make money. That being said, you could also completely ignore countertrend trades. Another way to look at this is that perhaps you should only take trades that line up with the longer-term daily trend. In fact, that’s probably good advice for almost all indicators.

Thoughts on the Intraday Channel Breakout Indicator For MT5

The Intraday Channel Breakout Indicator For MT5 is a great way to spot when momentum is turning in a currency pair. It simply makes it easier to see what that you should be looking for in the first place, when other traders are trapped in a bad position. Once momentum breaks above or below these areas, there is a bit of a “self-fulfilling prophecy” that makes the move continue. That being said, the indicator probably needs to be used with the longer-term trend more than anything else, as back testing has shown a huge discrepancy between trend following and countertrend trades. This should not be a surprise, as that’s normally the case with most systems or indicators.

Think of the Intraday Channel Breakout Indicator For MT5 as a visual guide to trend trading. While the indicator itself will give you signals in both directions, it is following the overall trend that makes this indicator so effective. This is a great way to see small moves become much bigger ones.