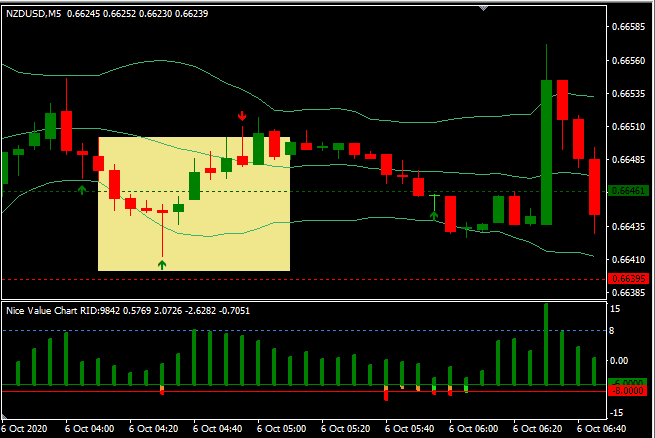 Using the Pin Bar trading price action Strategy For MT4, one of the most common price action patterns that appear on the chart is the pin bar. When using the candlestick chart type, this pattern can shoot up everywhere, regardless of the time frame. And often, its presence denotes a reversal of price direction. In fact, the structure of the pattern alone communicates that the market may have been way ahead of itself. The long wick or shadow signifies this and is another way for the market to say that it has come to its senses.

By itself, the pin bar can be the star player of a trading system, and all it needs are the right teammates (that is, indicators), and it can be a bonafide functional trading method. In this strategy, the Pin Bar will be aided by the Value Chart Indicator and the Bollinger Bands. And this article will tackle how these two indicators can combine with the pin bar to find great trading opportunities.

As mentioned, the pin bar is pretty easy to spot on the chart, but a good quality one -- a ne plus ultra, so to speak -- is defined by a long shadow, meaning that the real body should not be bigger than the wick. Ideally, the real body measures a fifth of the entire candle's length and not more than that.

Moreover, the pin bar's close with the wick pointing to the upside should be below the open and above the close if the wick is to the downside. What this suggests is that the previous strong move was completely overturned.

The pin bar will be the main signal for a trade, and the Value Chart indicator's reading must support it.

Developed by David Stendhal, the co-author of Dynamic Trading Indicators, the Value Chart indicator is a relatively new technical tool. It serves as an oscillator, which tells whether an asset is overbought or oversold.

The main difference between the Value Chart indicator and the popular ones like the RSI and Stochastic is that it shows market extremes but does so with minimal lag. This means that it can capture changes faster than its conventional counterparts.

And it works its way into this strategy as a way to confirm the pin bar pattern's call for a reversal. The Value Chart indicator shows the following readings:

Bollinger Bands are a versatile tool and offers plenty of functions for traders. Like the Value Chart indicator, it can tell whether an asset is at an extreme overbought or oversold condition with its bands. It can also recognize and communicate market volatility by either constricting or expanding its upper and lower bands. But for this strategy, it is utilized as a dynamic support and resistance level where the pin bar is expected to appear, so it carries more weight. In addition to that, the middle band is also used as a preliminary target.

One thing to note about this trading system is that it is suitable for scalping, which means that it can work on the 5-minute time frame, but it can also suit higher ones.

Now, here are the indicators needed for this strategy:

For a buy trade to take place, the first thing a trader should look out for is the pin bar pattern, and it needs to be situated on the lower band. To make this easier, one can download a pin bar detector for MT4 to get notified whenever the pattern appears on the chart.

The Value Chart indicator must back this up with an extremely oversold reading (less than -8). A buy stop will then be placed one pip higher than the pin bar candle.

In the example above, a textbook pin bar pattern appeared on the lower band, which marks an initial signal to go long. The Value Chart indicator reading dropped below -8, indicating that the current market condition is oversold for this currency pair.

A buy stop is placed just on the top of the pin bar's high (denoted by the green horizontal line) after its formation and was triggered at the next candle.

On the other hand, the pin bar should lie on the upper band for a sell trade, followed by an extremely overbought reading from the Value Chart indicator. After everything is clear with the sell signals, a sell stop is placed one pip below the pin bar pattern. 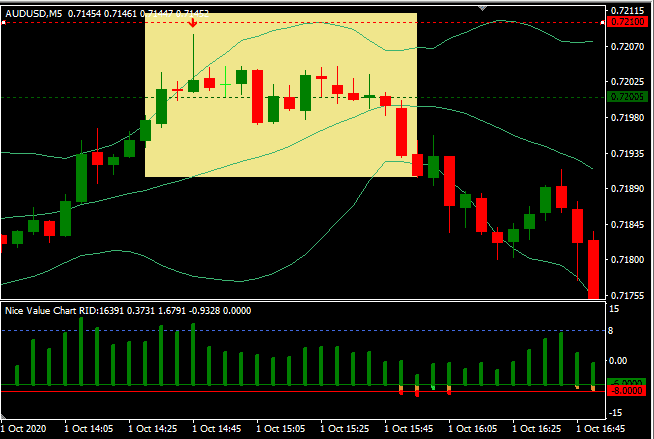 On the contrary, here is an example of a sell setup that did not meet one of the rules of this system: 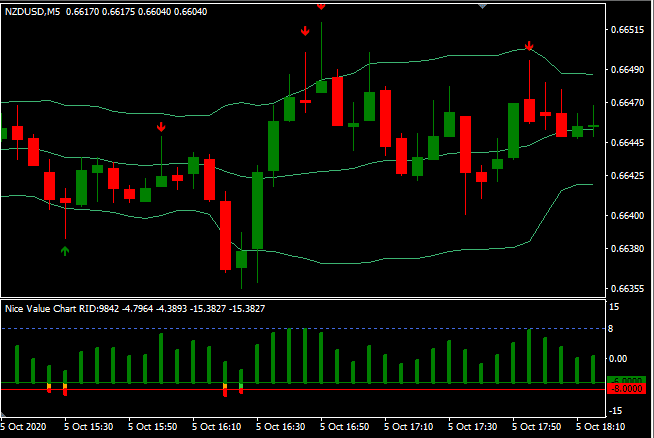 Two pin bar patterns appeared consecutively, and both are on the nose of the upper Bollinger bands. However, the Value Chart Indicator clearly shows that, even though that is the case, it is still not at the overbought level. Hence, no trade was taken.

Stop-losses are initially set at one pip below or above (depending on the transaction) the pin bar. Some traders will opt for a few pips from the most recent high or low, but this is more applicable to a time frame that's higher than five minutes. Scalping usually entails higher leverage than the norm, so it may be more prudent to get out early if a trade did not go as planned.

This system's exit strategy can be done in two ways: using the stop-loss or the Bollinger bands.

No trading before or during news

Finally, the most critical thing to keep in mind about this strategy is not to use it before or during major economic data releases. The market could be erratic at that point and render the system useless.