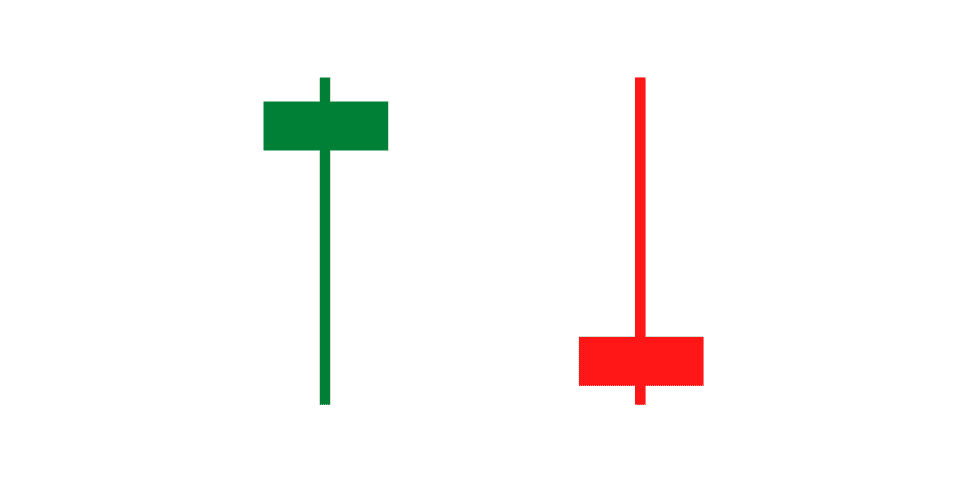 As straightforward as it may seem, there are a few well-defined criteria that a trader should keep in mind to trade this system properly. It is also crucial to have a thorough understanding of both technical tools in order to use them effectively. And that is what this article aims to achieve. By the end, the trader will be able to grasp the rationale for bringing the Pin Bar pattern together with the EMA to form this potent trading strategy.

What is a Pin Bar pattern, and what does it indicate?

The Pin Bar, which is short for "Pinocchio Bar," is a single-bar pattern first observed by Martin J. Pring. It indicates a potential reversal or, in other words, a rejection of an initial price movement. The long wick or the shadow that stretches out of the candle's small real body symbolizes Pinocchio's nose whenever the fictional wooden puppet was lying.

Likewise, in the markets, the pattern connotes that the price could be "lying" about a recently made move. So, after it forms, the Pin Bar can serve as a warning sign that the price's prior direction is in danger of reversing.

How to find a Pin Bar on the chart?

The ideal Pin Bar has a wick five times taller than its real body. However, to pass as a valid formation, the wick should be at least three times taller, and the open and close must be within the previous candle. In an uptrend, a reversal signal from this pattern would be a candle with the shadow pointing downward and vice versa.

When it comes to the pattern's location, it is best to find the Pin Bar at significant support and resistance areas. That is, the pattern can appear everywhere on the chart, but it carries more weight if the area in which it lies is paid particular attention to by traders.

Moreover, one critical feature that a quality Pin Bar should encompass is a wick that sticks out of a cluster of candlesticks.

This can be interpreted as the last hurrah of either buyers or sellers (depending on the trend) before the opposing side takes over.

As mentioned, the Pin Bar deserves more notice on significant support or resistance areas. And the tool to assist the trader in finding those areas is the EMA.

Moving averages (MA) are smoothing indicators, which means that they extend price points that refine the market's movements, including the jerkier ones. On the chart, this is displayed as a constantly moving line where the price can intersect or bounce off from.

Now, the EMA version of the MA is a little more sensitive to the most recent movement because of the weighting factor applied to the latest closing price. And the configuration for this system is set at 21 periods.

The reason for this setting is unlike the 200-period MA where the price can drift away from the indicator for long periods, a short period EMA stays close to the price as much as possible. In turn, the trader will find optimal areas to trade the Pin Bar.

This strategy works on all currency pairs and is applicable in any trading session. The best timeframe to trade this is the 1H, 4H, or daily, but it can also work on the 15-chart.

The only indicator for this system is the 21-period EMA. However, a Pin Bar detector can be added to help the trader spot the pattern quickly.

Here is an example of a BUY trade using this system: 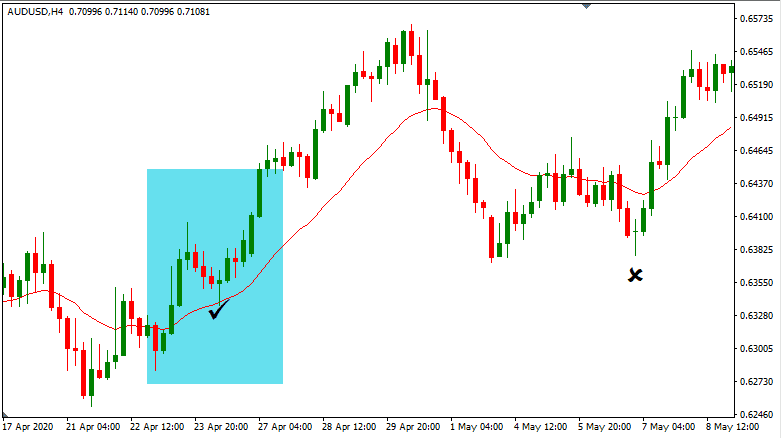 The Pin Bar pattern with a checkmark underneath fits this trading system's criterion wherein it touches the EMA with its shadow piercing through it.

Further, the Pin Bar's open and close is within the previous candle, and its shadow is the only one that sticks out among the candlesticks before it.

This trade ended up reaching a high of roughly 195 pips from an initial risk of 40 pips, including the five pips set below the Pin Bar's low.

There is also another Pin Bar on the right that resulted in the price trading higher; it is marked "x." The trade worked out well, but this trade was not taken because the Pin Bar is past the EMA support level.

Here is an example of a SELL trade with this system: 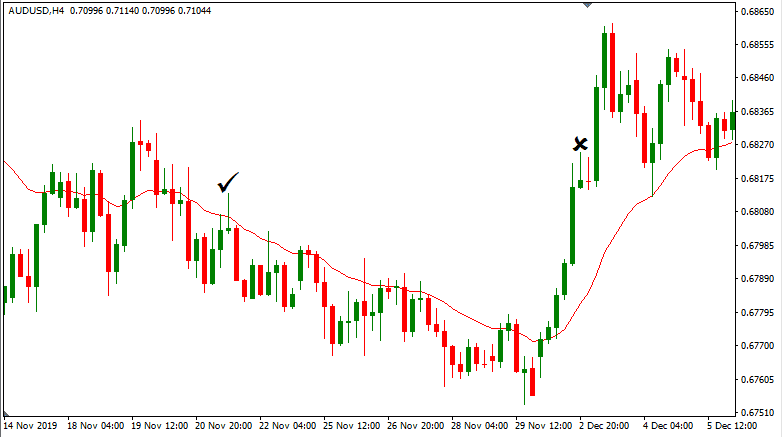 Again, the Pin Bar must pierce the EMA's support or resistance level. In the sell trade example above, the Pin Bar's shadow went through the resistance level, marking a sell setup. It is also an ideal formation since its length is a fifth (maybe even less) of its shadow. Like the BUY trade example, its shadow is also sticking out and is not shrouded by the prior candles.

The trade garnered about 40 pips before buyers took control.

The Pin Bar marked "x" on the right does not fit the system's rule of finding support or resistance using the EMA; it is way beyond the resistance level that it broke above five candles ago.

Below is a screenshot of a chart that uses an indicator for locating the Pin Bar. There are arrows that point to every Pin Bar pattern that appears on the chart, and all the trader has to do is assess if it is a good quality pattern and if it pierces through the support or resistance level. 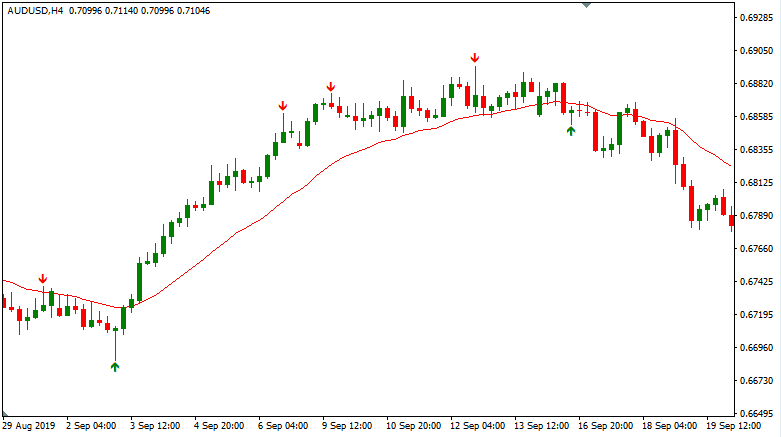