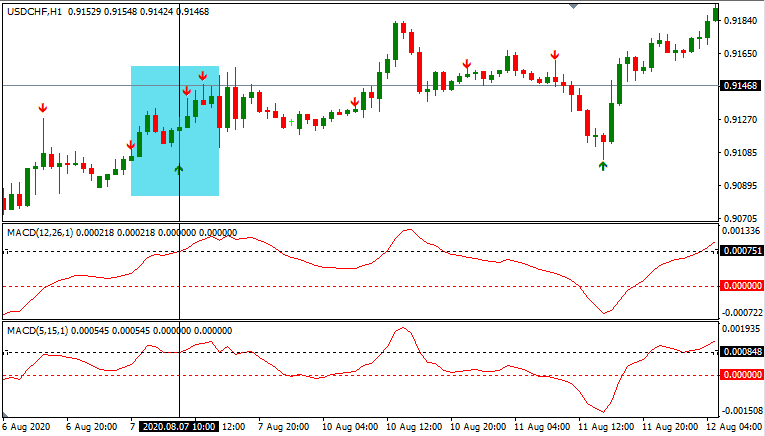 The Pin Bar with Two MACD Trading System For MT4 is a unique blend of a price action pattern and two of the same indicators. It is not the same as other systems where a single price action pattern predicates a trade with one oscillator serving merely as secondary confirmation. In this strategy, the Pin Bar is still the catalyst for a trade, but the two MACDs work in concert as a sole indicator that backs up the Pin Bar.

This article explains how this strategy's components make a reliable trading method that works in all timeframes and applies to any currency pair.

The Pin Bar, as mentioned, will be the primary signal. But since this pattern sprouts all over the chart, a good rule of thumb in spotting it is to look for a candle with a real body that makes up only a fifth of the entire candle's length. The candle's quality is an essential factor in this system's trade setups' success but not the determining one. And a Pin Bar detector for the MT4 will make locating the pattern a lot easier. All a trader has to look for are the arrows on the chart that automatically spot the Pin Bar.

Once this pattern is spotted, the next thing to observe is the combination of two MACDs and interpret their reading.

One thing to remember about the MACD is that it is based on moving averages of past price data. And while it cannot predict a shift in trend promptly (as with most indicators), its flexibility still makes it a popular technical tool for defining market direction, signaling trades, and gauging momentum.

It fits right in with the Pin Bar as a way to increase the probability of what the Pin Bar is predicting the market to do.

And as previously touched on, the MACD indicator used in this strategy is a fusion of two MACDs. One MACD will have these parameters 12,26 and 1 while the other will have 5, 15 and 1. The thing to consider is similar to the classic function of a MACD, which is the crossover of the MACD line and the signal line.

However, for this version of the MACD, the crossover will be represented by a single line from each MACD. That single line is the 1-PERIOD EMA of the MACD line and how it is positioned relative to the other is what will prompt a trade.

An MT4 indicator that synthesizes the two MACDs and the Pin Bar in one visually unambiguous graph is the “Pin Bar with Two MACD indicators.” Instead of having both MACDs and one Pin Bar detector inserted in one chart, the indicator displays two histograms (one in blue and another in yellow) plus an arrow pointing to every Pin Bar all in one graph.

For a valid buy entry, the components of this strategy should meet the following criteria:

Here is an example:

The above screenshot is a perfect example of a BUY trade using this system. The blue arrow points to the Pin Bar pattern for a potential long position in the chart's highlighted area. A vertical line was drawn to match the Pin Bar to the MACD readings. Then, a horizontal line was outlined in both MACDs to highlight what each present value is. This was a valid setup because the MACD line fulfills the criteria where the (5, 15, 1) has a greater value than the (12,26,1), and both are above 0.

Here is an example BUY setup that one should not follow: 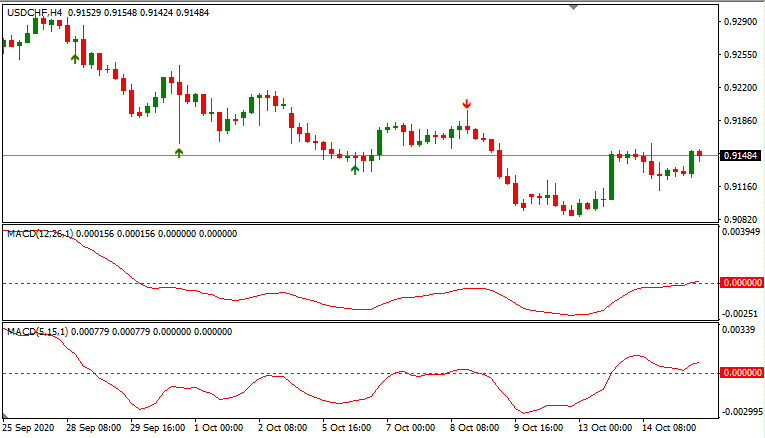 There were three Pin Bar patterns detected by the indicator in the chart above, but the MACD did not confirm these entries. The first green arrow had both MACDs with a reading greater than 0, but the MACD (5, 15, 1) was not higher than the other MACD (0.00124 compared to 0.00298).

Then, the next few potential entries both had a MACD reading less than 0; therefore, no trade was taken. 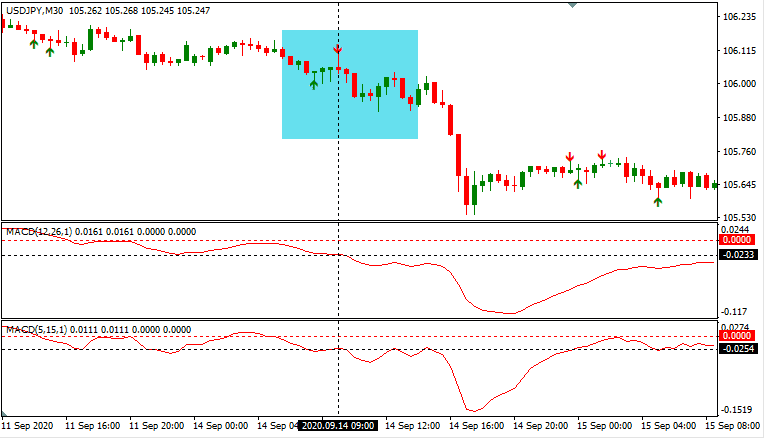 In the example above, the Pin Bar detector recognized a SELL entry through the pattern formation in a clear downtrend. The next step is to have the MACDs validate this entry. With the MACD (12,26,1) showing a higher value than the MACD (5, 15, 1) and the MACD (5, 15, 1) is lower than 0, this setup is a valid short entry.

Here is an example SELL setup that one should not follow: 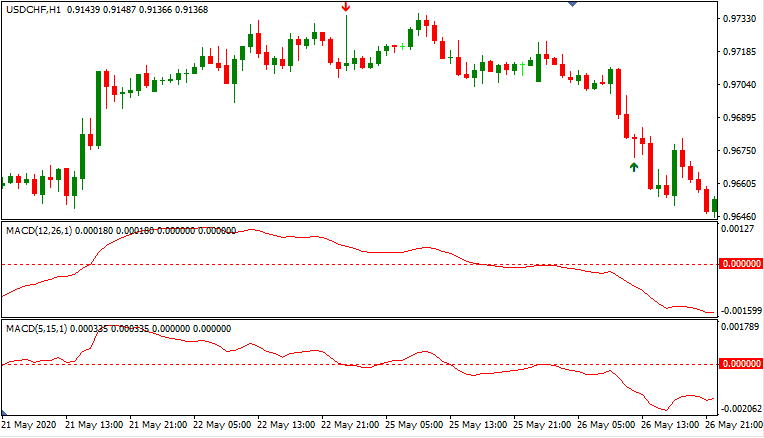 Even though there is a clear Pin Bar at the top of this downtrend, no trade was taken using this system's rules because MACD (5, 15, 1) is still clinging at a level above 0.

The exit strategy for this system's trade setups offers no explicit profit targets other than basing it on a higher proportion than the set risk. In doing so, this would still result in gains even in the case of a lower win ratio. And the risk is determined through the stop-loss that is placed immediately after getting confirmation of a valid setup. For example, the distance between the stop-loss and entry is 30 pips, then a 45-pip to a 60-pip target would yield net positive results.

Please note: Learning a new trading system always comes with a learning curve at the beginning and some unnecessary trading errors. Therefore, we recommend that you trade this system on a demo account during the first weeks and sharpen your skills.