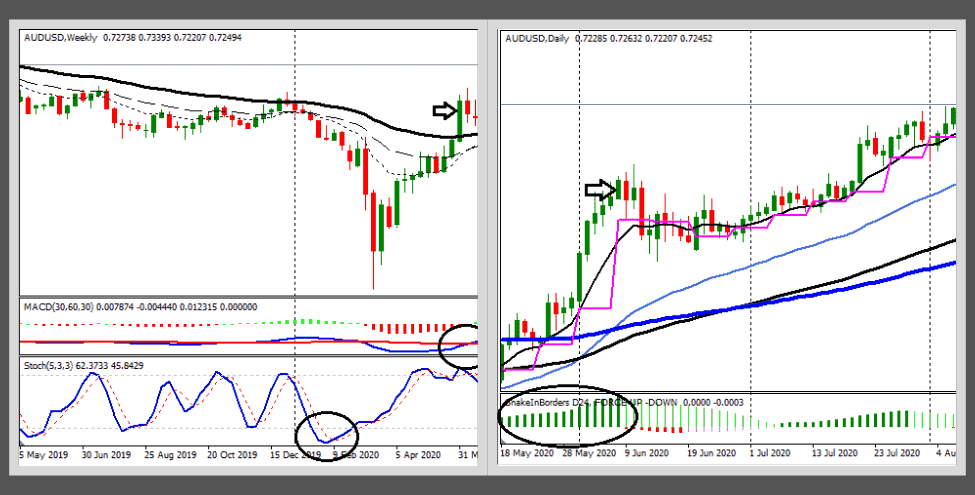 The Pips Swing fx strategy Trading System For MT4 is a multi-timeframe trading method that is most suited for swing trading. This strategy utilizes two different sets of indicators on longer-term timeframes, namely the weekly and daily. And it is premised on both timeframes and their corresponding indicators confirming one another to validate a trade setup.

This article discusses this strategy's components and the parameters to look for in entering a trade, so traders interested in using this system will be able to trade it properly.

As mentioned, the indicators apply to two different timeframes. The first set of indicators are for the weekly chart, and it is comprised of the following:

While the second set of indicators is for the daily chart, and they include:

As can be observed, the selection of indicators on the weekly chart is designed to be unanimous on a trend. In other words, all five of them should agree on the market's direction by being in harmony with what each of them indicates.

With the Moving Average Convergence Divergence or MACD, on the other hand, a crossover signal should manifest, and coincide with the prevailing trend. A crossover occurs when the MACD line intersects the signal line. For example, if the MACD line crosses above the signal line during an overall bullish trend, then it signifies a bullish confirmation.

Finally, the Stochastic further backs up what the moving averages and the MACD indicate with an oversold reading. The Stochastic is an oscillator that creates two bands of price extremes: one for overbought and one for oversold.

And with the configuration modified to 5, 3, and 3 from the slower standard of 14, 3, and 3, the indicator becomes more sensitive to price changes, thereby offering earlier signals. And it is also due to this sensitivity that the Stochastic will usually portend a change in market direction in this strategy.

Now for the daily chart, a tetrad of moving averages with different periods is employed. Like the weekly, the price should also show visible distance from the moving averages to establish the trend.

Finally, the last component of the strategy is the Snake In Borders indicator. This displays a kind of bar graph with green and yellow bars that resemble the MACD. It works its way into this strategy as a trade entry. At least three bars must print in the direction of the prevailing trend to confirm an entry.

Two indicators here are not available on the MT4 platform, particularly the Pips weekly pivot and the Snake In Borders indicator. These two should be downloaded and copied to the trading platform's "Indicator" folder along with the system's template.

When both are installed and the template is loaded up, the MT4 will automatically insert each chart's specific indicators, making it seamless to switch from one chart with different indicators and indicator settings to another.

The initial signal of the trade comes from the weekly timeframe since multi-timeframe analysis follows a top-down approach. Therefore, the majority of the indicators on the weekly chart should be in sync.

As mentioned, the Stochastic will usually show either an overbought or oversold reading. This is quickly followed by the price breaking above or below the moving averages or a MACD crossover.

Once everything satisfies the weekly trade setup rules, the next step is to examine the daily chart. Again, the price should be trading above or below the moving averages. And an entry would occur if the weekly pivot acts as support or resistance for the prevailing trend and that there are at least three bars (in the direction of the trend) on the Snake In Borders indicator.

To expound on this further, below are trade examples that will demonstrate how this works in both long and short trades.

On the weekly chart below, the Stochastic's oversold reading served as the initial warning that the AUDUSD's several weeks of decline is about to reverse. 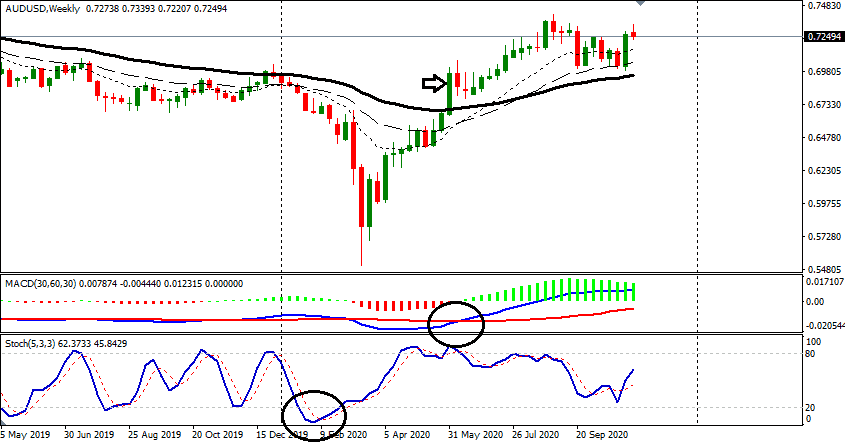 When the price started rallying back to the levels before the mid-March dip, there was no indication that this was going to be a viable buy trade until the green candle (marked by the arrow) broke above all the moving averages. Two weeks later, the MACD supported this with a bullish crossover.

As the weekly chart signals an uptrend, the entry timeframe is observed next. In the daily timeframe, the price can be seen to have traded above the moving averages as well. However, the entry was unavailable until June 8 as that candle marked the start of the week after the initial break on the weekly timeframe. 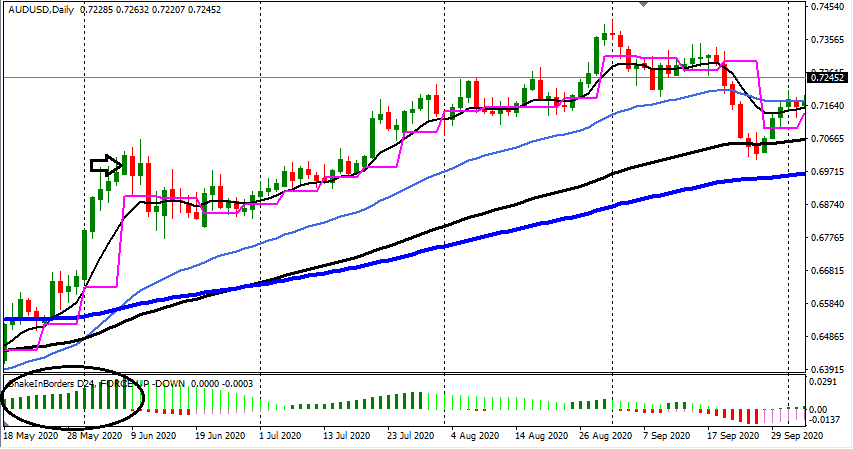 Adding basis to this is the weekly pivot line acting as support and the Snake In Borders exhibiting multiple green bars. The stop-loss level option in this swing trading system is at least 50 to 890 pips below the entry. But another method is to use the 89-day moving average initially.

This trade fell to about 235 pips before topping almost 400 pips of profit.

Just as with the buy setup, the Stochastic presaged the downturn of price with an overbought reading. It took a while for the price to trade lower than all moving averages since trades like this take weeks to develop. But when it did, a bearish crossover from the MACD was also in view. 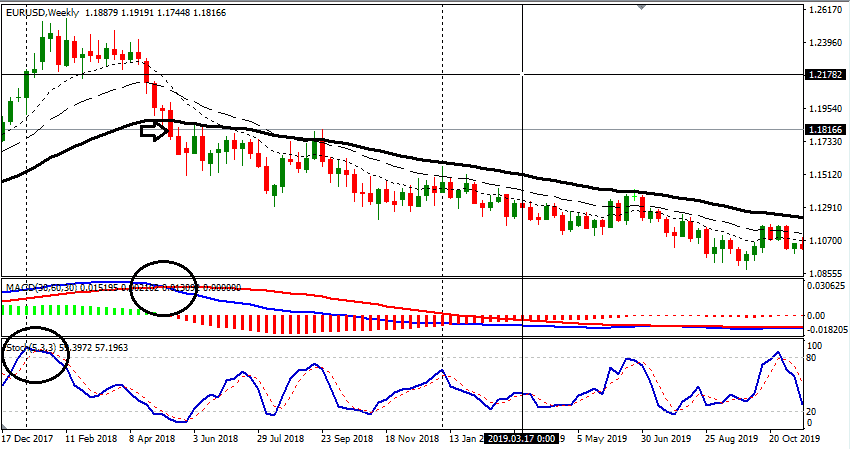 And of course, the next step is to open the chart where the actual trade will be placed. Similar to the higher timeframe, the daily also showed the price trading below all moving averages. Furthermore, the weekly pivot line acted as resistance, which is a necessary condition for this system, and the Snake In Borders already displayed a series of red bars. 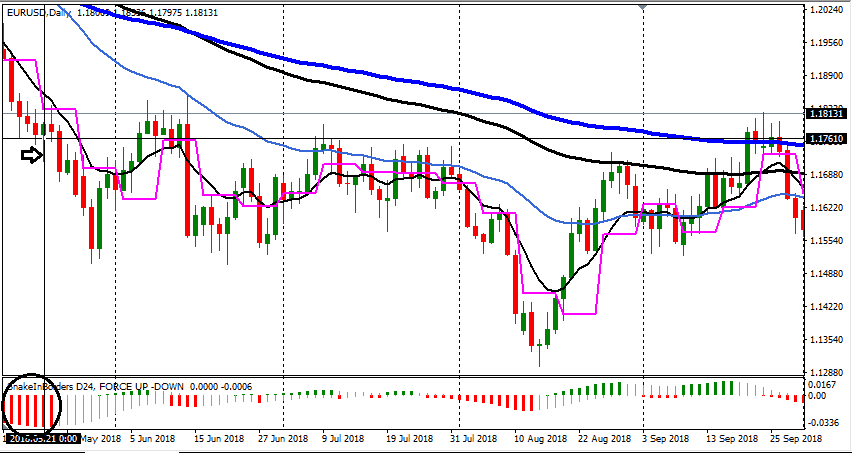 The arrow marks the entry, and the stop-loss follows the same range of 50 to 890 pips. One crucial thing to keep in mind is to allow the stop-loss level to remain unchanged until after two weeks as this prevents restricting the price's movement. This trade was able to acquire almost 500 pips of profit after reversing just 50 pips from the entry.

Please note: Before you trade this strategy with real money, we advocate to learn the system on a demo account first. Every new system/strategy has a learning curve and mistakes can be easily made. So it is better to risk paper money than real money at the beginning.