The Pivot Buy Sell Strategy For MT4 Strategy for MT4 is a trading method composed of a set of moving averages (MA), pivot points, and a custom indicator called the Traders Dynamic Index (TDI). Its overall function is to trade trend momentum based on an MA crossovers filter and a TDI signal with pivot points as profit targets and stop-loss levels.

This article is a comprehensive guide for understanding the components and the precise rules for trading this strategy. It also discusses why each indicator comprises an effective system for trading currencies.

The system's most fundamental part is the moving average indicator, and it uses six pairs of it with varying periods to act as a trend filter. Usually, one moving average is adequate to determine the market's general trend, as the 200 MA on longer timeframes. And it is based on where the MA is situated relative to the price.

For this system, an MA function, which is to signal trades through crossovers, is utilized. That crossover should be situated either above or below the price to determine the trend.

A bullish crossover occurs when the set of short-period moving averages crosses above the cluster of longer-term moving averages. When this happens, and the price follows suit by trading above all the MAs, then the most suitable position should coincide with the uptrend, i.e., buy orders.

On the other hand, a bearish crossover occurs when the cluster of short-period MAs crosses below the set of longer-term moving averages. If the price follows by trading below both sets of MAs, then sell orders are preferable.

The complete set of MAs

As mentioned, the system is composed of a set of long and short-term MAs, both of which are determined by the number of periods the indicator accounts for or averages.

It is also important to note that the system uses the Exponential Moving Average (EMA), which is the same indicator but offers more emphasis on the latest price to catch changes faster.

Here are the two sets of MAs used in this system:

The whole purpose of applying a bunch of indicators like this is to capture the momentum of price across different periods. It can also be interpreted as a consensus among several EMAs that the price's trend is robust. This improves the probability of trades taken that are based on the established trend of the MAs.

The TDI is a custom MT4 indicator that fuses three different technical tools into one indicator. It is made up of the Relative Strength Index, Bollinger Bands, and moving averages and are graphed in one indicator sub-window. 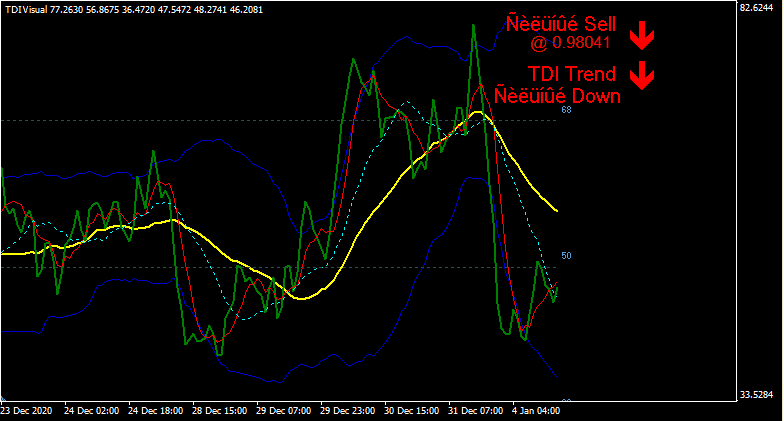 Much like the pairs of moving averages discussed earlier, the TDI also looks for a consensus among the indicators it uses and tries to offer a complete picture of the present market condition.

The TDI provides the main trigger for a trade. If the TDI signals that the trend is up, then that means the indicators comprising it agree on a bullish direction of price.

The alert it provides is this: 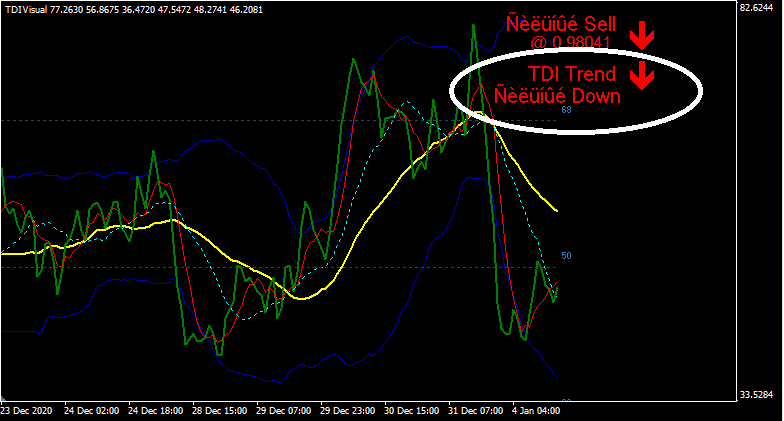 The last component of this strategy is pivot points. Pivot points are critical turning points on the chart that are marked by horizontal lines. Those turning points are based on the main pivot level, which is the average of the previous day's high, low, and closing price.

Pivot points generate up to seven levels on the chart and are utilized by most traders as critical support and resistance lines. But this system employs them as a way to set targets and stop-losses.

Here are those levels on the chart: 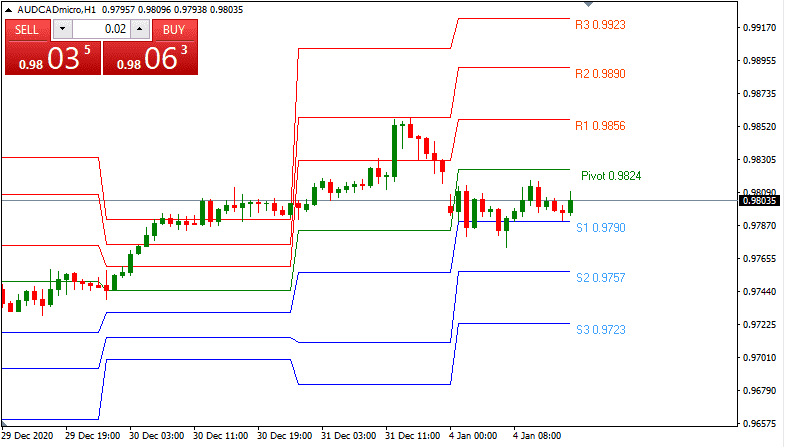 The Pivot Buy Sell Strategy For MT4 Strategy for MT4

Now, this system puts everything together by having the TDI indicator first signal a trade. The moving averages should then support this by offering a trend that agrees with the TDI's signal. For instance, if the TDI signals a buy trade, the price should be trading above all the moving averages to confirm it.

Once in the trade, the next pivot level higher or lower (depending on the position) is the primary target, while the next level opposite to it is the stop-loss.

So apart from the six pairs of exponential moving averages mentioned earlier, the system also needs the following indicators:

An optional custom indicator called "Symbol Changer profit display V.3." can be added to add another sub-window that offers quick navigation for traders who trade multiple assets. Also, a template is highly recommended to load up the necessary tools automatically. 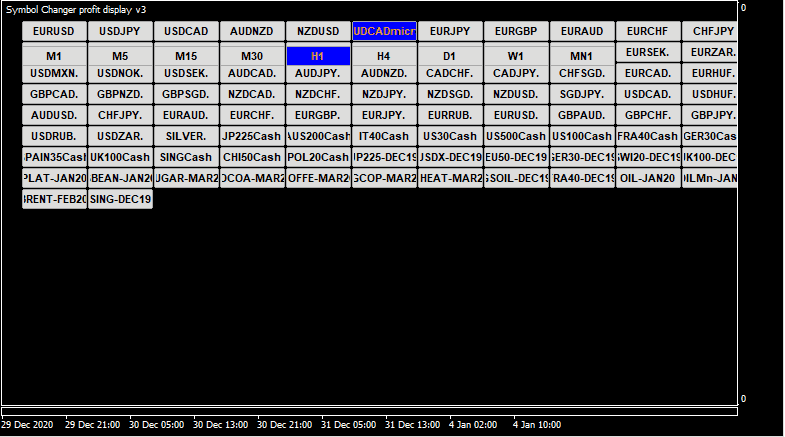 Here are the parameters to look for in a potential buy trade: 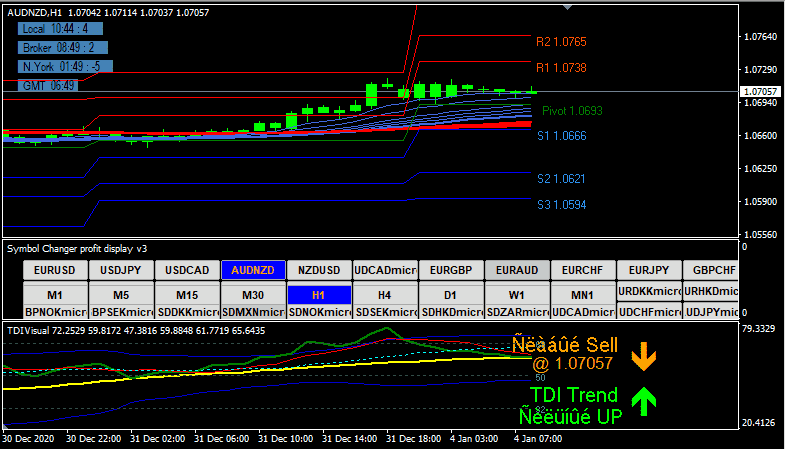 As can be observed from the sample trade, the TDI registered a buy signal: green up-arrow stating TDI Trend UP. The EMA filter supports this as both sets of moving averages are clearly over the price. After placing the order, the stop-loss is placed at the S1 level (1.0666), and the target is the R1 level at 1.0738.

A technique to capture more profits while keeping risk low is to move the stop-loss at breakeven once the initial target is hit and close only part of the total order.

Here are the parameters to look for in a potential sell trade: 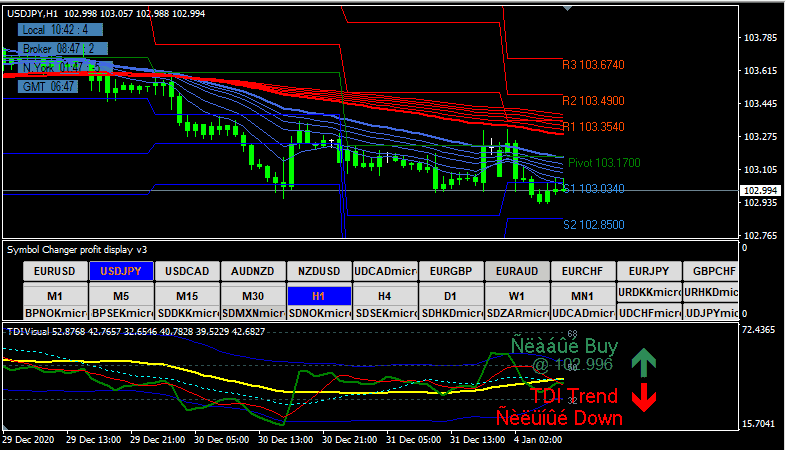 From the above example of the USDJPY trade, the TDI registered a sell signal, and the price is trading below the EMAs. A sell trade can be placed at market order with the stop-loss set at the main pivot point 103.17 and the initial target is at S2, 102.85.

Again, the same technique of closing it at breakeven can be applied along with a partial close once the initial target is in the books.

Typically, a potential trade with the TDI indicator registering consolidation should be avoided because this does not follow the concept of momentum trading, at least for this system. The whole system is premised on the strength of a trend established by a consensus among all indicators involved. This means that if all of them are in harmony in offering a buy signal, then that is the optimum trade to take.

Here is a sample where all the moving averages agree on a sell trade, but the TDI is in consolidation mode, so no trade was taken. This sample infers that the price could be on course to trade higher.

Warning: Always trade a new trading system on a demo account for at least a few weeks. This will help to avoid costly mistakes especially at the beginning.