Pivot points levels with the blade oscillator Strategy For MT4

The Pivot points levels with the blade oscillator Strategy For MT4 is a price action momentum strategy that is well-adapted for trading four major currency pairs: AUD/USD, EUR/USD, GBP/USD, and USD/JPY. It combines a linear weighted moving average with pivot points. And it also employs a custom indicator called the Blade Oscillator, which is mainly for validating the system’s trade setups.

This article provides an overview of each component of the strategy and explains how the entire system works. It also presents examples of successful trades and defines the correct parameters to trade them effectively.

The Blade Oscillator, even though it seems like an ancillary tool for validating trade setups, is the main component of this system. This custom indicator was developed to gauge the price's momentum, and it fits well with the pivot points and moving average.

On the MT4 platform, the indicator generates a dotted horizontal line at "0" and is referred to as "blade line." The blade line can be thought of as a boundary between bullish and bearish momentum. Anytime the fluctuating line on its graph crosses above the blade line, it indicates momentum to the upside and vice versa. Sometimes traders even use it to determine the overall trend, operating as more of a trend filter.

The Blade Oscillator's fluctuating line also switches from red to blue or blue to red, and it is an additional measure of bullish and bearish behavior of the market. When the line's color is blue, it reflects the price's bullishness and red when it indicates bearishness. 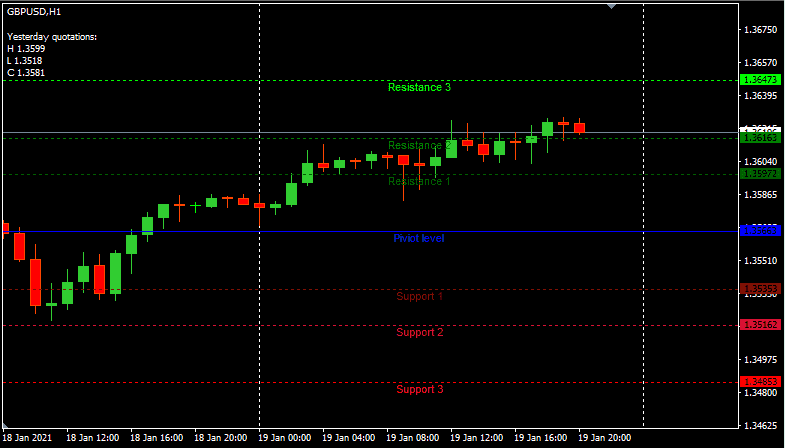 The next component of this strategy is Pivot Points. Pivot Points are one way to produce support and resistance levels that are not influenced by a trader's interpretation of a chart. It is created using a math-based formula that factors in the price metrics (high, low, and close) of the previous session. Therefore, the price levels it makes are slightly uniform across different broker platforms.

Pivot points comprise a central pivot point, and three other equally spaced lines positioned above and below. Price action trading can depend entirely on pivot points, but some traders favor adding an extra tool to substantiate their positions, like the Blade Oscillator.

How it works its way into this system

The idea behind pivot point trading is comparable to support and resistance trading. When the price breaks or bounces off a support or resistance level, traders can take a position accordingly: they can either ride the break or bet on the bounce. 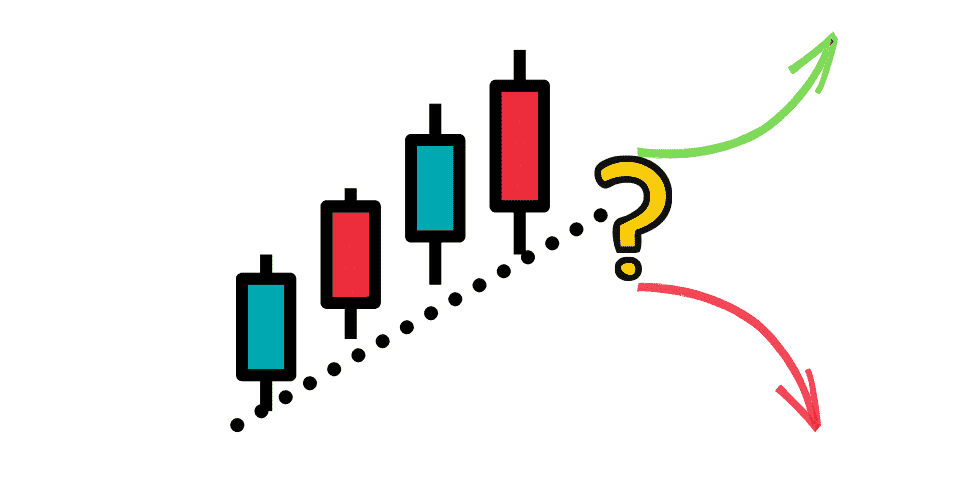 This is inherently the same concept of Pivot Points and is what the system uses to assess the potential price movement. So, one could infer that if the price breaks a pivot level, there is a greater chance that it will maintain that momentum. But a failure to close above or below a pivot line could indicate that the market is not ready to move beyond a specific price point yet.

The third component of this strategy is a moving average (MA). MAs are perhaps the most basic technical indicator. It is essentially the average of prices over a certain period and is plotted as a continuously moving line that is laid over the asset's price.

And the system uses the average of the past three periods' closing price. When such a minuscule quantity of periods is used, the MA line will not deviate considerably from the price. Adding more sensitivity to the most recent price data is the type of MA used in this strategy, the Linearly Weighted Moving Average. 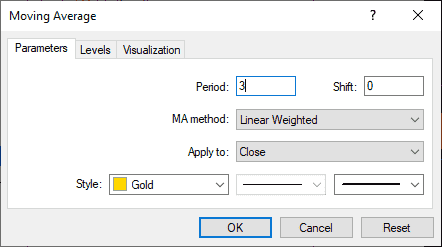 Now, this narrow gap between price and LWMA makes it a good measure of the dynamics between the price and indicator. The function of the price closing above or below the moving average is a gauge of momentum, supplementing the two other tools in this strategy.

The Pivot points levels with the blade oscillator Strategy For MT4

Now, the entire system hinges on how the three components band together. And it first starts with the price exhibiting momentum via breaking a pivot point level while simultaneously closing either above or below the LWMA. And the main component, the Blade Oscillator, should confirm this with line color and line position (above or below the "blade line") that coincides with the identified setup's direction.

In other words, the Blade Oscillator would have to agree with the setup detected by the pivot point and moving average to prompt the entry. This is explained further in the trade examples section.

Here are the indicators needed for this system:

The best timeframe for this strategy: 1-hour chart.

And remember that this system is proved to work on these four major currency pairs only: AUD/USD, EUR/USD, GBP/USD, and USD/JPY.

Here are the long setup rules: 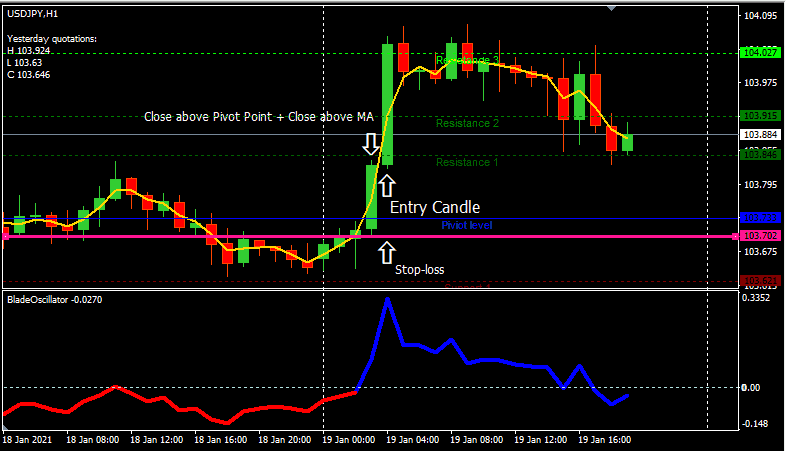 As shown from the example, USDJPY closed above the main Pivot Point (blue horizontal line) and the LWMA (yellow line) on January 19. The Blade Oscillator also indicated bullish momentum as its line is blue and above zero. A buy trade was taken on the next candle after the initial break, and the stop-loss was placed just a few pips below the main Pivot Point. The next candle turned out to be a real winner as it broke all three pivot levels within one hour.

Here are the short setup rules: 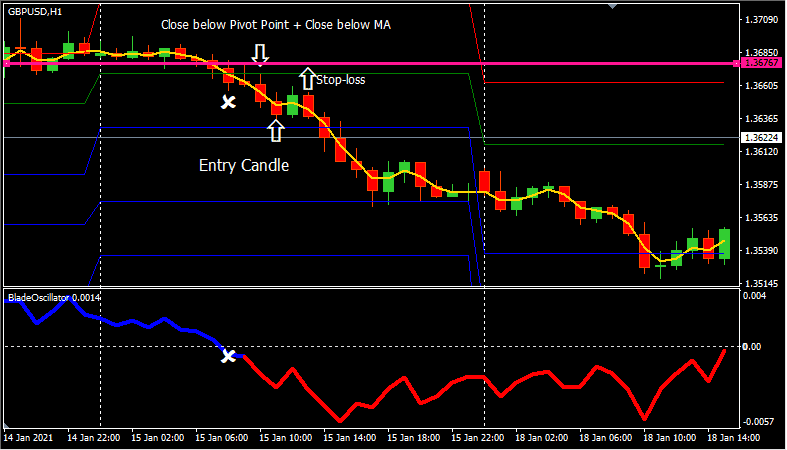 The second opportunity to short the pair came just a couple of hours later. Since there was already a close below the main Pivot Point, all that is left is to have the three other parameters in play. At that point, the Blade Oscillator was already reflecting bearish momentum as its line now turned red, and it was still below zero.

After the price closed below the LWMA, a trade was taken. The stop-loss was placed at a few pips above the central Pivot Point and is marked by the pink horizontal line. The trade hit the initial target, which was the S2, since the break was too close to the target level.

Note that traders have the option to keep a position open overnight as long as the initial target is secured and the stop-loss is readjusted accordingly. But it would be best to look for fresh setups on the next day.

We suggest to trade a new trading system on a demo account for at least a few weeks. This will help you to learn the system without risk of losing money. Later you can switch to a real money account.