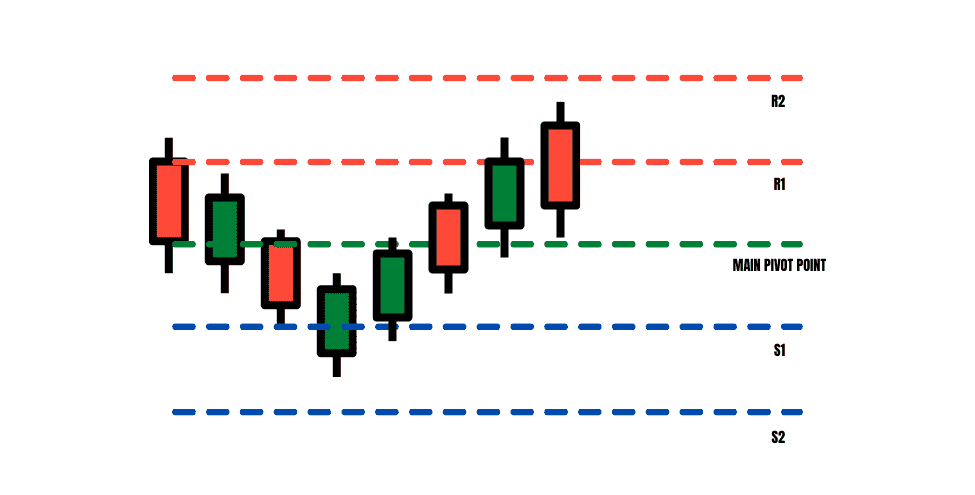 The Pivots Points levels with Stochastic Cross alert Strategy For MT4 is a trading method that combines pivot point levels and the Stochastic indicator. It works by detecting a trade setup using a custom pivot point indicator while using the Stochastic cross as the basis for the entry and exit.

This article explains this strategy's rules and presents a step-by-step guide for trading it effectively.

Pivot points are an uncomplicated way for generating horizontal support and resistance levels on the chart. The main pivot point is derived from the average of the prior session's price metrics (high, low, and close), usually the previous day.

Aside from serving as support and resistance lines, pivot points have other uses, and it includes the following:

The Stochastic oscillator is an indicator for estimating the price's momentum. It compares the most recent closing price to its other prices (mainly the highs and lows) over a specified period.

It creates two bands that delineate price extremes. Generally, traders use Stochastic as a gauge for trading a range-bound market; it underpins a trade entry based on its reading. For example, a valid buy trade is signaled by a specific strategy's parameters and the Stochastic supports this with an oversold reading.

How does it aid Pivot Points in this strategy?

In this strategy, a custom Stochastic indicator, much like the Pivot Points, is applied. This version of the Stochastic oscillator only detects crosses and does not display the standard line graph.

A cross is defined by a reading that begins to move away from the extreme level. For example, when both the indicator's lines are below the oversold level (20) and the crosses above it, then that is a bullish cross.

Now, the way the system works is the Stochastic signals a trade, and the position of the price relative to the central pivot point validates it. A bullish trade setup is confirmed if the cross occurred above the main pivot point and a sell trade when the cross took place below it.

The custom Stochastic oscillator points out where the cross came about with arrows: it displays a red arrow for a bearish cross and green for a bullish cross.

This system works best on the hourly timeframe since the pivot point levels are based on the previous day's price metrics. And the only indicators needed are the following:

Here are the system's set of rules for long positions: 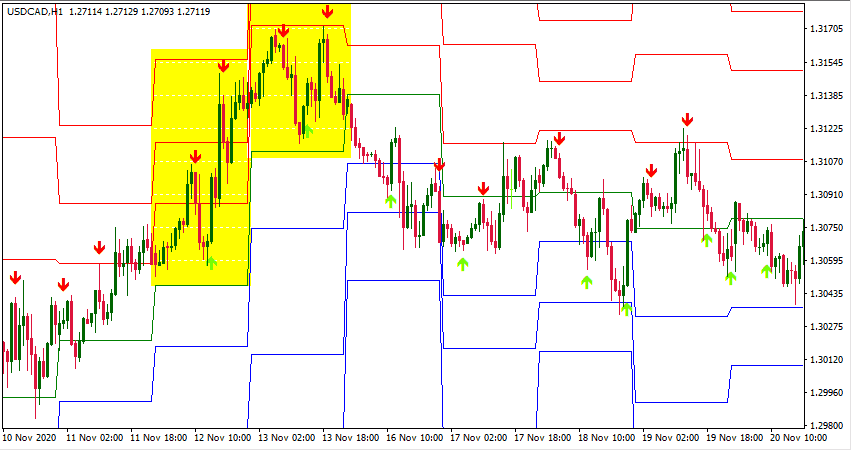 In the example above, the Stochastic cross alert signaled two long trade setups (highlighted in yellow). The green arrows that mark a bullish cross on the Stochastic in the two examples appeared above the main pivot point line (green line), which was the alert for a buy trade.

A buy trade is then placed as soon as that occurs, and the stop-loss is positioned three pips lower than the main pivot point. The first trade's overall stop-loss was 21 pips, while the trade after that had 11 pips since the entry was close to the pivot line.

Here are the system's set of rules for short positions: 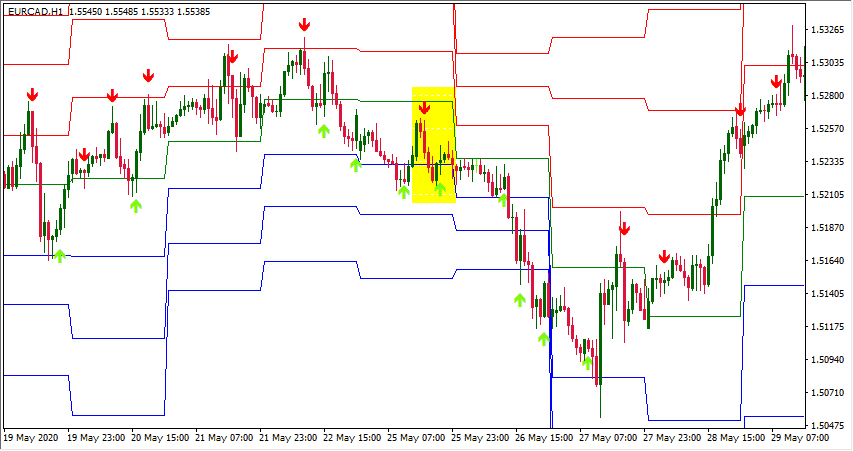 The example above shows one trade setup (highlighted in yellow) that meets the criteria of a short trade: there was a red arrow of the Stochastic cross alert indicator, and it was below the central pivot point. A market order was placed as soon as the signal appeared, and the stop-loss was fixed at three pips above the main pivot line. This trade ended up with about 30 pips of profit from an initial risk of 25.

But as can be observed, the trade went on to trade lower and breached all pivot point support levels in the next few days. In this case, a trailing stop can be placed to capture the rest of the profits once the initial bullish cross appeared. This way, the initial profit is secured and simply makes room for additional gains.

Please note that you should always use a demo account when you learn a new trading strategy. This will help you to avoid financial losses during the learning curve which comes with every new trading system. On a real money account we suggest a conservative money/risk management where you should not risk more than 1% of your trading capital for each trade.