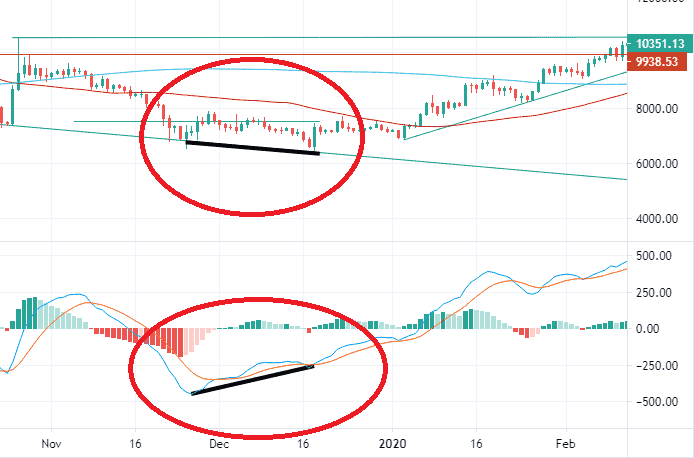 The Scalping with pivot levels Strategy For MT4 is, as its name suggests, is a system for finding trading opportunities on the platform's lower range of custom timeframes. It uses a set of indicators and maps out daily, weekly, and monthly pivot points to visualize areas of significant support and resistance where trades will originate and terminate.

This article offers a detailed guide for understanding this system's technical components and provides the rules and specific examples for trading it.

Components - The Scalping with pivot levels Strategy For MT4

The components of this strategy include the Relative Strength Index (RSI), Schaff Trend Cycle (STC), and the Moving Average Convergence Divergence (MACD). And the next few paragraphs explain each indicator's key usage that is utilized specifically for this system.

The RSI, of course, is one of the most populator indicators that gauge's the market's overbought and oversold conditions. Sometimes traders may use the RSI's readings to signal a trade. But for this system, the price reaching extreme RSI values adds merit to potential transactions because overbought and oversold readings increase the probability of the price changing course.

But instead of using the standard MT4 RSI, the system uses another version, the RSX. Developed by Nick Bilak, the RSX is touted to have been able to eliminate market noise, which effectively reduces false signals. And it also detects earlier entries, making it a more suited indicator for a scalping strategy.

The second component of this system is an indicator created by currency trader Dough Schaff in 1999, called the Schaff Trend Cycle. The STC is based on the idea that currency trends accelerate and decelerate in cycles regardless of the timeframe.

Essentially, it is an indicator devised to meet currency trading objectives, and like the RSI, it also contains two trigger levels. However, the key difference here is that this is not based on calculating the price's relative strength; the formula for the STC is derived from the MACD and a smoothed Stochastic that are both designed to determine changes in price direction at a much faster rate.

The third component is the MACD. Now, unlike the two anteceding indicators that serve as a trade signal, the MACD here acts as a divergence spotter, in which its utilization is entirely at the trader's discretion.

Divergence occurs when the direction of the indicator is evidently moving in a different direction than the price, and spotting it is one of the primary uses of the MACD.

Below is an example of what a MACD divergence looks like:

The MACD's sole role in this system is to find divergence. Otherwise, it would result in an influx of indicators with similar functions that may risk sending off wildly contrasting signals.

Finally, a pivot point indicator rounds up all the components of this system. Pivot points take the average of the previous session's high, low, and close and plot them on the current session. It then manipulates the main pivot point calculation to add layers of support and resistance. 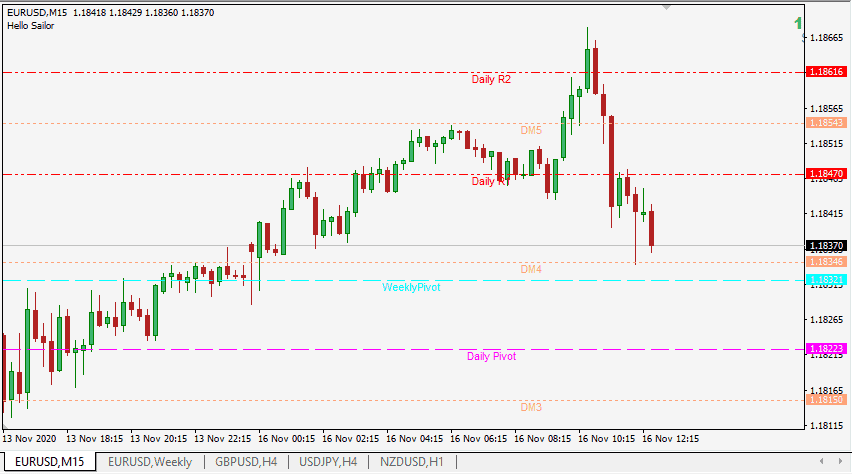 Typical pivot points account for the past 24 hours' price metrics, but the indicator in this strategy, the Autopivot V.5, plots the weekly and monthly pivot points to outline support and resistance areas that may carry (and possibly coincide with daily pivots) some significance intraday.

Putting it all together

So, the whole strategy depends on the agreement of the RSX and the STC, and for a trade to take place, the price should be trading near a daily pivot level. The MACD can either buffer the trade setup recognized by the three indicators, but again, it is not the most consequential.

Again, here are the specific indicators that will be necessary for this strategy:

The trading template, Scalping with Pivot Points, will automatically apply the abovementioned custom indicators on the chart once all of them are installed. It will look something like this:

And it is best to use this trading method on the 15-minute chart.

Buy Setup - The Scalping with pivot levels Strategy For MT4

There are a few things to look for in a buy setup: 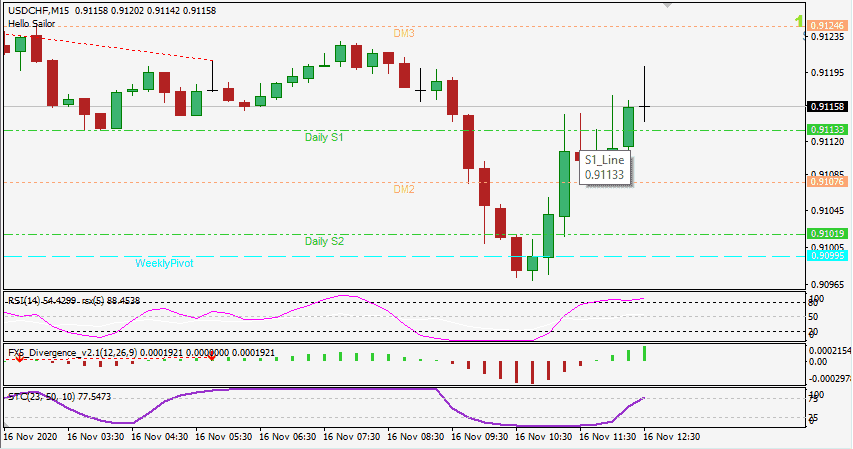 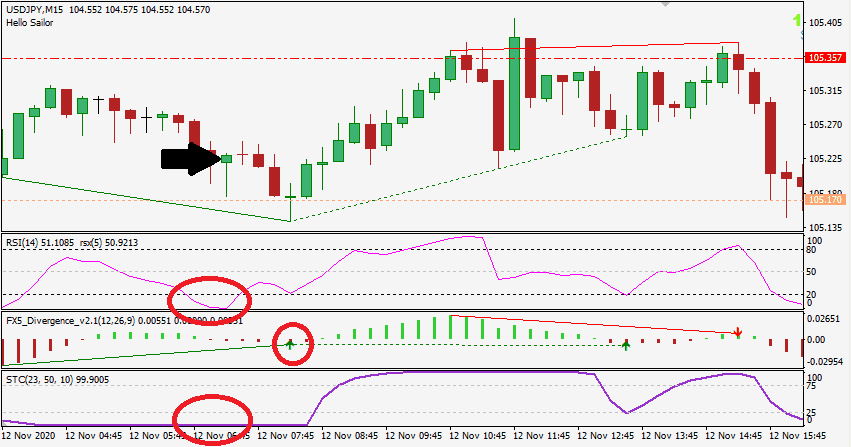 On the USDJPY 15-minute chart of Nov. 12, all the buy trade setup parameters were in play. The RSX was below 20, the STC was hovering at 0, and a green candle closed above a pivot point middle line (DM5 line, which is between R2 and R1).

Upon entering the trade, the price fell to about eight pips from the entry. After a failed attempt to close lower than the pivot point, the Gopher started rallying with a MACD divergence even to support it.

A 7-pip stop-loss was placed just above the pivot point found at 104.98, and the profit target was secured within the day.

Sell Setup - The Scalping with pivot levels Strategy For MT4

Here are the things to look for in a sell setup: 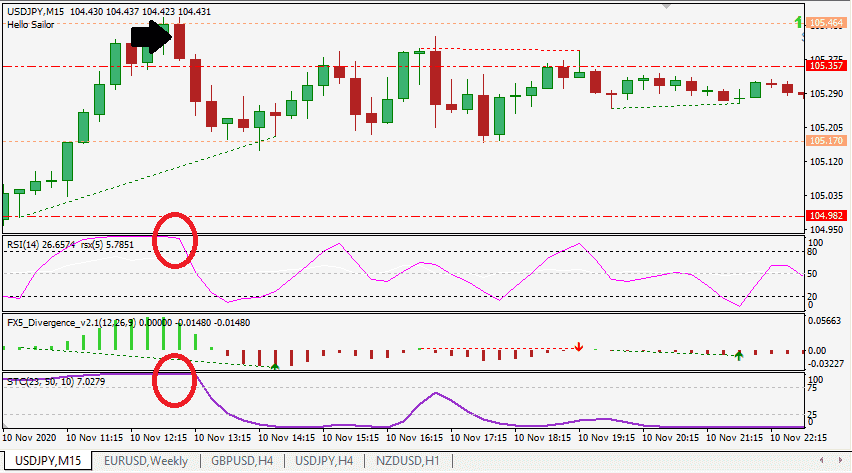 On the same USDJPY 15-minute chart, it can be observed that a sell trade occurred two days prior to the buy setup example. On Nov. 10, the currency pair printed a red candle below a pivot point middle line (DM6 line between R2 and R3). An above 80 reading on the RSX plus a 100 STC is there to support this short position.

This time there was no MACD divergence, but the trade worked out well, bagging 20 pips of profit upon reaching DM5. The stop-loss was set on R3 (ten pips from the entry) instead of 5 to 7 pips below it because the price was too close to the pivot point.