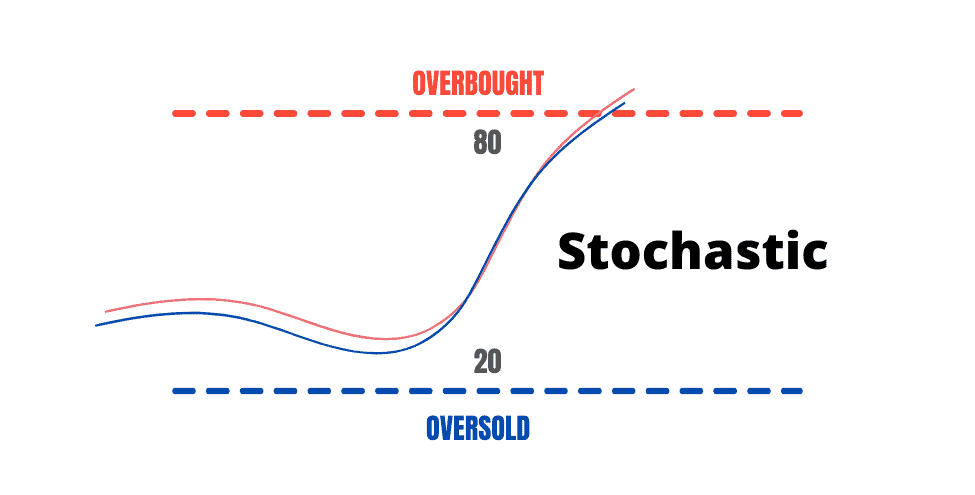 The Stochastic and Ema Trading System For MT4 is a strategy for trading an asset's extreme price levels. It takes a combination of two indicators, the Stochastic and Exponential Moving Average (EMA), to both enter and exit trades.

And the entire system hinges on a standard function of the Stochastic oscillator and EMAs, so it is crucial to have a background on what these two indicators are primarily used for.

Nonetheless, it is a reasonably straightforward system that even new traders can follow, and this article will provide a thorough guide for trading it properly.

The Stochastic is an analysis tool that determines the price's overbought and oversold levels by using the most recent close as a percentage and comparing it to the highs and lows of a particular price range over a period of time.

The theory behind this is the closing price should be within the range of the current trend. Because of this specific calculation, the Stochastic is sensitive to new price data compared to other oscillators, which is why most traders prefer using it on a ranging market.

The overbought level of the Stochastic is the condition wherein the particular asset's bullish activity has been unceasing up to the most recent data, at least for the specified look-over period of the indicator. Under this condition, the Stochastic shows a reading of above 80.

Conversely, the oversold level is described by continual bearish activity wherein the latest closing price reaches the point wherein it is too low compared to the range of prices in the indicators look-over period. An oversold Stochastic reading is below 20.

The EMA, on the other hand, is a version of the simple moving average (SMA) that pays particular attention to the newest price data. It uses a weighting factor for the latest closing price, making it much more reactive to changes than the regular moving average.

On that account, a combination of two EMAs would be far better equipped in detecting a change in market direction faster than the simple moving average. But by the same token, it would also be more susceptible to false signals because of the same early detection capability.

Below is a comparison between EMA and SMA:

The combination of the 200 and 50 EMA alerted the downturn of XRPUSD faster than the 200 and 50 SMA from the chart screenshot above. The bearish cross, which is when the 50 MA crosses below the 200 MA, happened 24 days earlier with the EMA.

Moreover, it recognized it at a price difference of -8.21%, meaning that that is the percentage of gain that traders would have failed to capture if they used the SMA as their trade signal.

The Stochastic and Ema Trading System For MT4

Now, as mentioned, the two indicators work in tandem by providing trade entries and exits. Essentially, there are two ways that both indicators can do this.

The first one is they can back up each trade setup with comparable signals. For instance, if the Stochastic moves from a sub 20 to an above 20 reading, that alerts a buy setup.

The equivalent of this is a bullish cross from between the two EMAs (5 EMA crosses above the 11 EMA).

If these signals happened together, it improves the probability of a long trade setup. And the exit is when a simultaneous bearish cross takes place for both indicators.

The other is they can offer alternating entries and exits. In other words, either the EMAs or the Stochastic can signal a trade. For example, the entry is a bullish EMA crossover, but the exit is a bearish Stochastic cross and vice versa.

This strategy works on all timeframes and on all major currency pairs. And below are the indicators needed for this strategy and their suggested parameters:

The rules for a buy setup are simple: 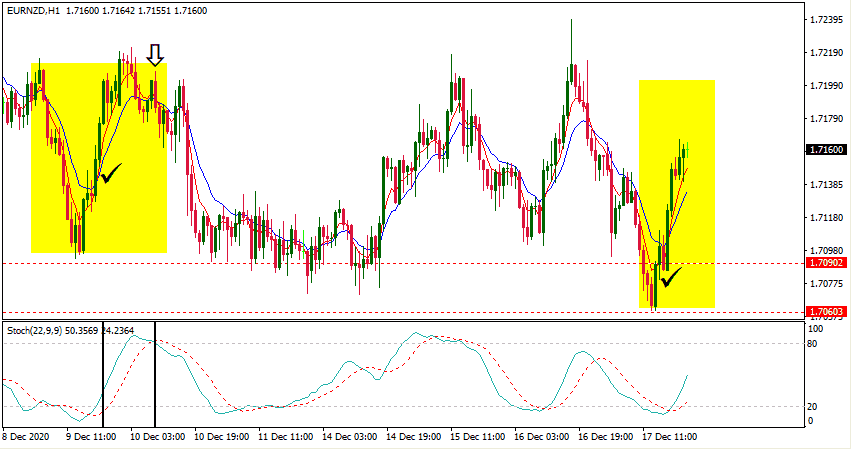 There are two trades in the example above. The first one on the left (highlighted in yellow) is a complete trade from entry to exit, while the other one shows only a valid entry.

On the left, the EMA bullish crossover together with the Stochastic having moved away from the oversold region signaled the long trade. And the horizontal dashed line marked the stop-loss. For this trade, the exit came the next day as a bearish crossover appeared for both indicators.

The long trade on the right is like the first setup since both the indicators of this strategy exhibit a bullish crossover.

The rules for a sell setup are as follows: 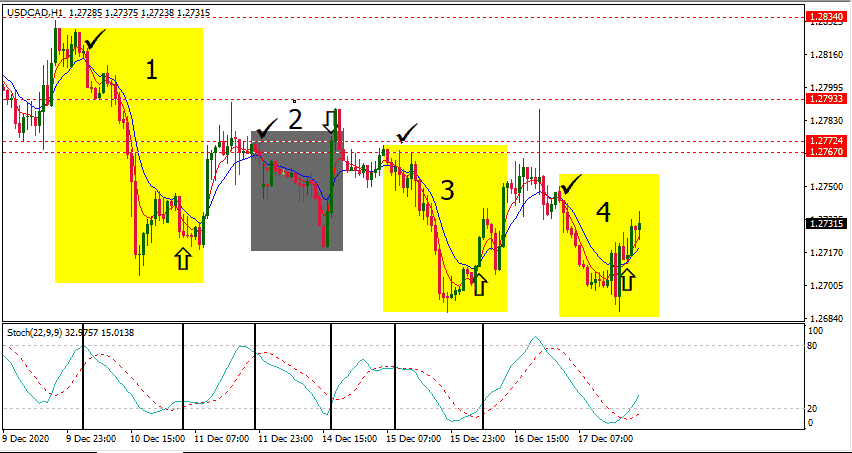 Now, in the screenshot above, there is a lot to look at as the strategy offered four sell trades. And out of those four trades, three of them were winners, and they are highlighted in yellow. The only losing trade, which is trade number 2, is highlighted in red.

Trade number 1's signal is an EMA bearish crossover (EMA 5 < EMA 11), and the exit used was a Stochastic cross above the oversold level. Trade number 2 ended up a loser not because it hit the initial stop loss but because it was terminated due to a bullish EMA crossover.