According to the inventor, it can be used to trade all forex pairs, crude oil, CFDs on indices and stocks as well as metal assets such as gold and silver. The assets which trend very well are well suited for this strategy.

The indicators used for the strategy are as follows:

The best time frames to deploy with this strategy is the 4-hour time frame. Some preliminary analysis of the weekly and daily time frames can also be done in order to determine the market structure and the overall trend of the asset.

The aim is to trade what the 4-hour chart shows that is in tandem with the daily chart and the weekly chart.

The essence of using the 200 SMA is that it is a well-recognized dynamic support and resistance indicator.

Apart from the simple moving average which is native to the MT4 and listed in the trend indicators section, the other indicators are custom indicators and need to be properly added to the MT4 data folder in order to work. To do this, follow the steps below.

Please make sure you use the non-repainting version of the SuperTrend indicator for maximum accuracy. There are several obsolete versions of this indicator online. What is featured here is the latest version.

If you are using the 4H Trader indicator, please note that it generates a lot of signals, some of which are not accurate. This is more or less a scalper’s tool. But if you want to swing trade properly using the moving average and the SniperTrend indicator, you can do just that.

The long trade opportunity is setup when the following parameters are seen on the 4-hour chart:

The long trade setup is a break of price above the 200-SMA. The SuperTrend indicator merely confirms this move.

The breakout occurs when the price bars or candles have closed above the 200-SMA (and its extensions). Usually, it is best to allow at least two successive candles to close above the 200-SMA to confirm this break. You can also use the 3% penetration test. 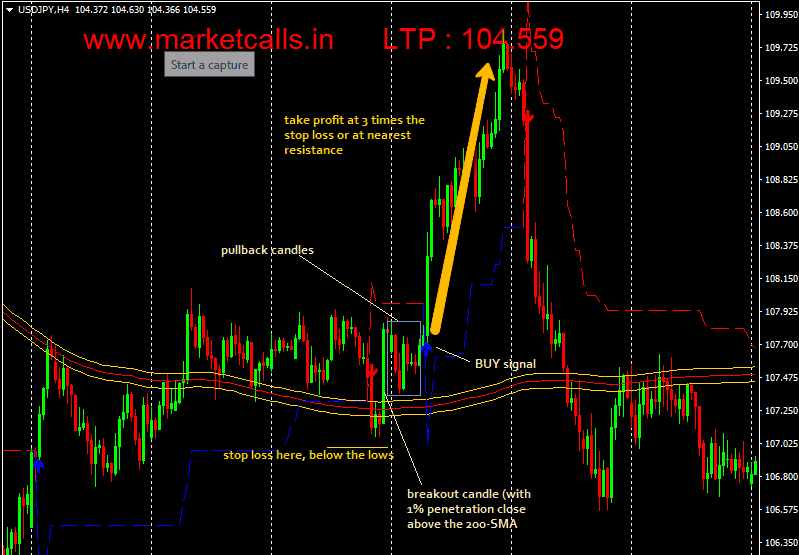 Here, we have the breakout candle which closed by more than 1% penetration above the 200-SMA. Subsequent candles showed pullback action as price attempted to return to where it came from. The SuperTrend indicator’s blue arrow signalled the point at which to set a BUY trade.

Set the Stop Loss (SL) a few pips below the lows of the candle that precede the breakout candle. The Take Profit setting should be at 3 times the stop loss, or 3R according to market parlance. This simply means that a risk-reward ratio of 1:3 (stop loss:take profit) should be used.

The short trade opportunity is created when the following appear on the 4-hour chart:

The breakdown is said to occur when the price bars or candles have closed below the 200-SMA (and its extensions). Again, allow for a 1% penetration close below the 200SMA, or at least two successive candles (if the closing price of these candles is close to the 200SMA. Alternatively, you can allow for a pullback retracement towards the broken 200SMA, and then pull the trigger when the SuperTrend’s red arrow appears.

The snapshot below shows what the short trade setup looks like. 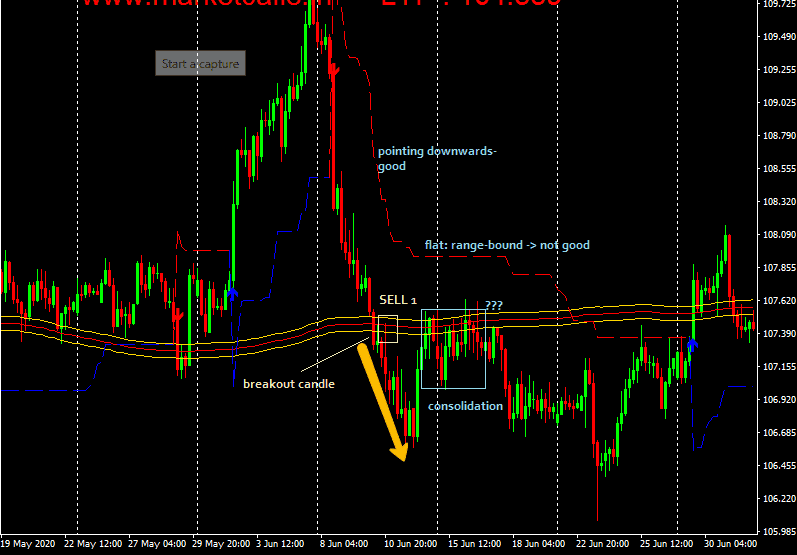 There is a reason this chart has been highlighted, so as to identify a good entry and an area where a short trade would have been too risky to take.

The area marked SELL 1 is where the entry parameters were established. Despite the absence of a red arrow on the SuperTrend indicator, the conditions of the breakdown were accomplished, and an experienced trader could have taken the trade easily.

Note that at this point, the SuperTrend indicator line is already red and pointing downwards. showing that the potential for a downtrend move was good.

Now note the area where price began to consolidate, with candles that failed to make any headway. Notice that in this area, the SuperTrend was flat, indicating a range-bound situation. This would not have been a good place to trade.

Using the 200-Simple Moving Average Channel and 4H Trader Trading System, the stop loss is placed a few pips above the high of the candles which immediately precede the breakdown candle or bar. The Take Profit (TP) point is set at a minimum of three times the number of pips used as the stop loss to give a risk-reward ratio of 3R minimum.