What Is Level1 And Level2 Trading?

The Level1 and Level2 trading style are two additional trade entry methods which can be used to exploit our best trading setups "Mini-Bubbles" and "Mini-Crashes". 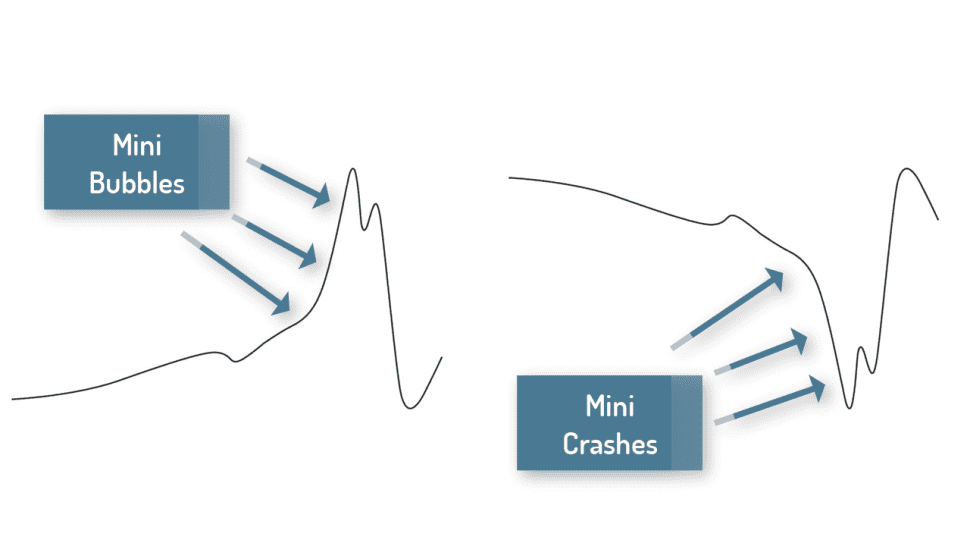 Often we see a highest probability bubble- or crash-setup, but then we don't get a V-Power entry signal or a Double Top/Bottom signal. This can be quite frustrating, because the mini-bubbles and mini-crashes do not appear every day. And it's especially frustrating for those traders who would like to have as many trades as possible.

With the Level1 and Level2 entry method, you will have MANY more trades within the extremely valuable Mini-Bubble and Mini-Crash setups.

Especially with the Level1 method you will get an entry with nearly every setup.

What Is Level1 And Level2 Within Mini-Bubbles?

In the following screenshot you can see the red thick line, which shows the first price drop, in the moment when the bubble starts to collapse.

During an upward trend you saw multiple green days (the daily candle was bullish), and then suddenly you see the first red 1 day, where the daily candle is drawn in red color.

This first red day is called Level1, because it is the first push to the downside, which is initiated by the smart money. You can read more about the 3-day-levels. 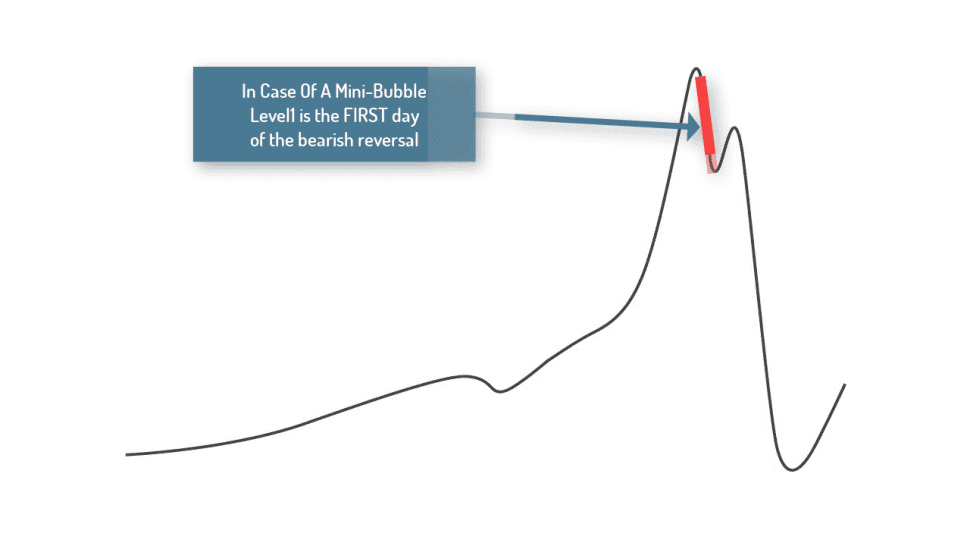 The second red day is called Level2 and is labeled with the thick red line in the following screenshot.

After the level1 on the previous day, the market went into a sideways price action or even a pullback during the Asian Session.

Then on the second day, the downward move continues. In our example, the collapse of the bubble continues. 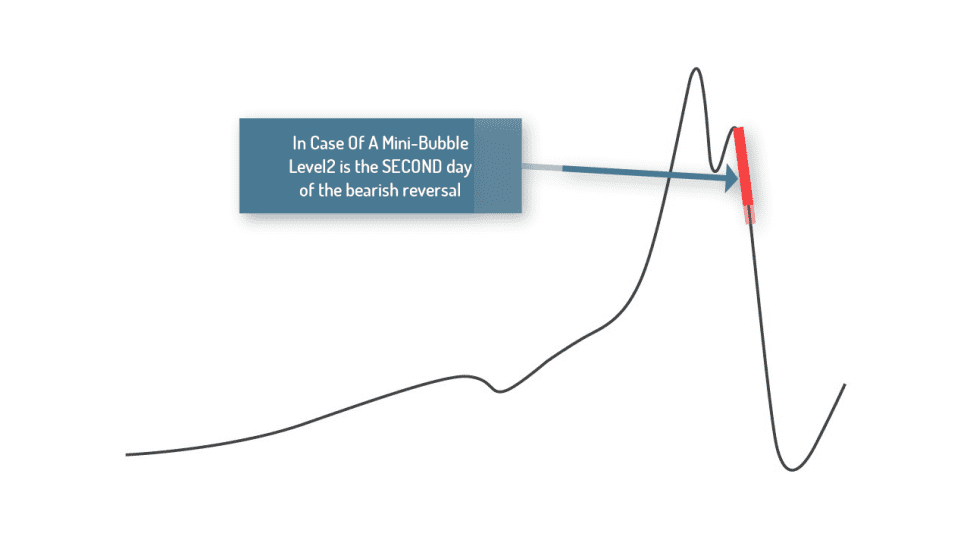 There is a well known saying in the trading world: THE BIGGEST MOMENTUM IS AT THE REVERSAL POINTS

The black ellipse in the following screenshot shows the area of the biggest momentum. This is the area right below of the top of the bubble.

This area of the biggest momentum is also the area for the highest probability for a successful trade. 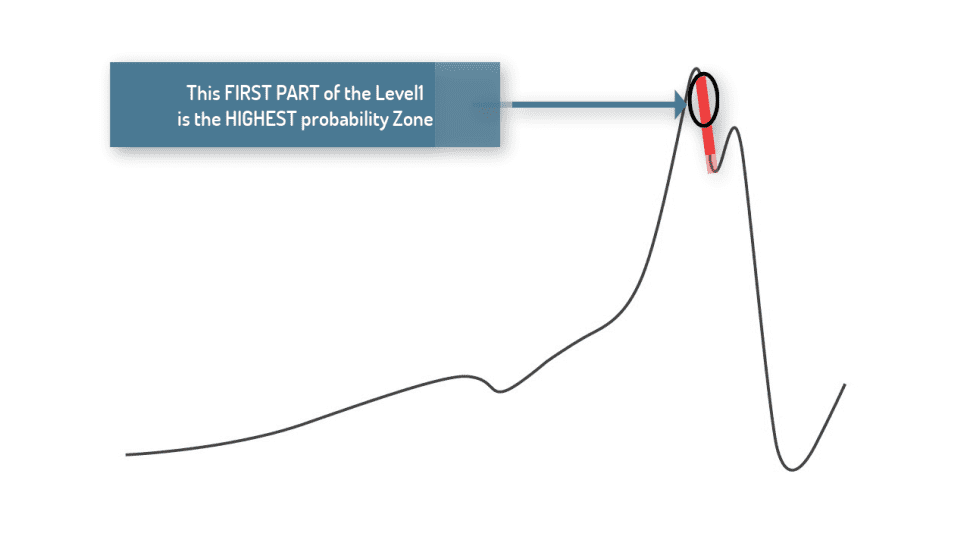 Under special conditions you have another highest probability zone during the Level2 downward move. Within this zone we will open and close our Level2 trades.

Later, I will explain the exact conditions which we need to see, to participate at a highest probability Level2 trade. 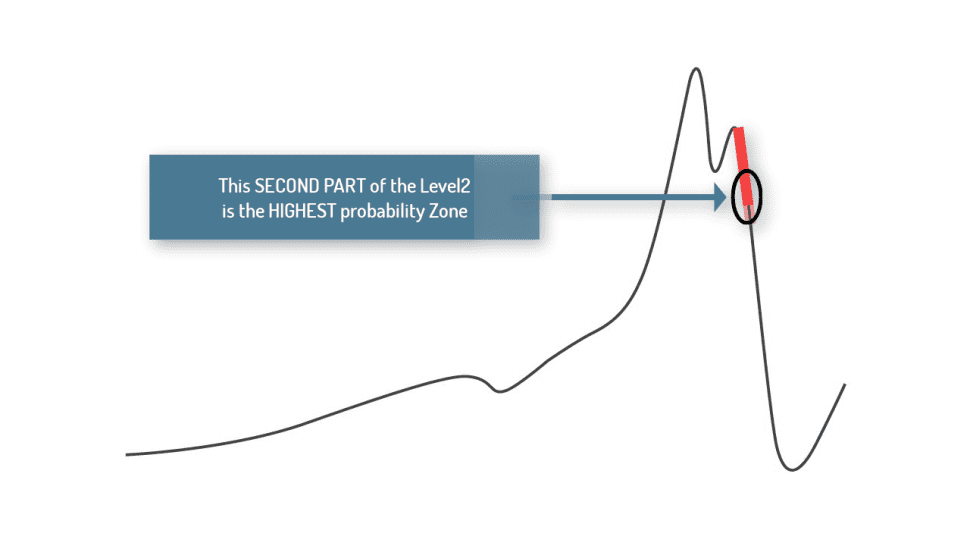 In the following screenshot you can see the schematic sequence of a Level1 trade at the top of a bubble.

The Level1 EA is preconfigured with a relatively small target, to give a high winning percentage. 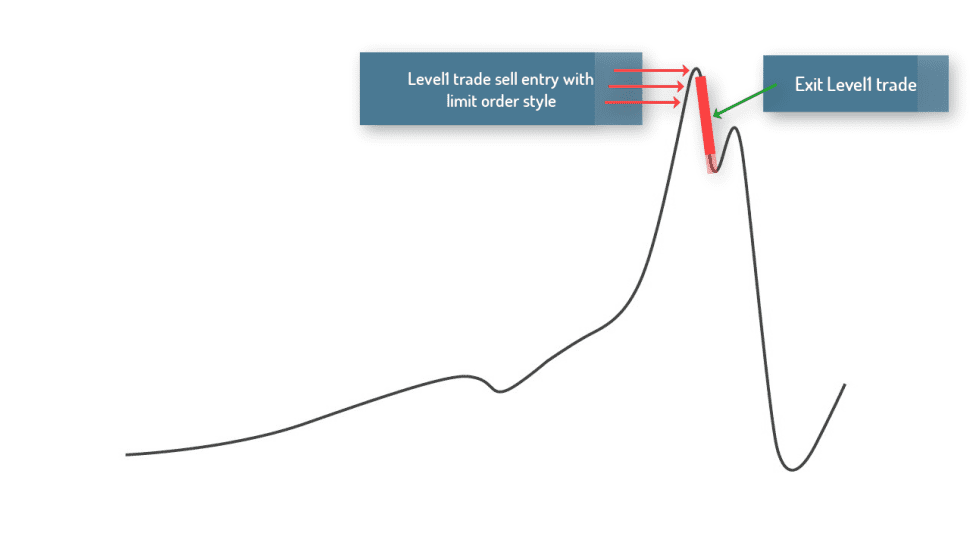 If the conditions are met for a valid Level2 trade, then the trade will be opened as soon as the price creates a new low on the second day of the reversal. The  target distance should also be selected conservatively to guarantee a high winning percentage.

As I said, later I will exactly explain the conditions for a valid Level2 trade. 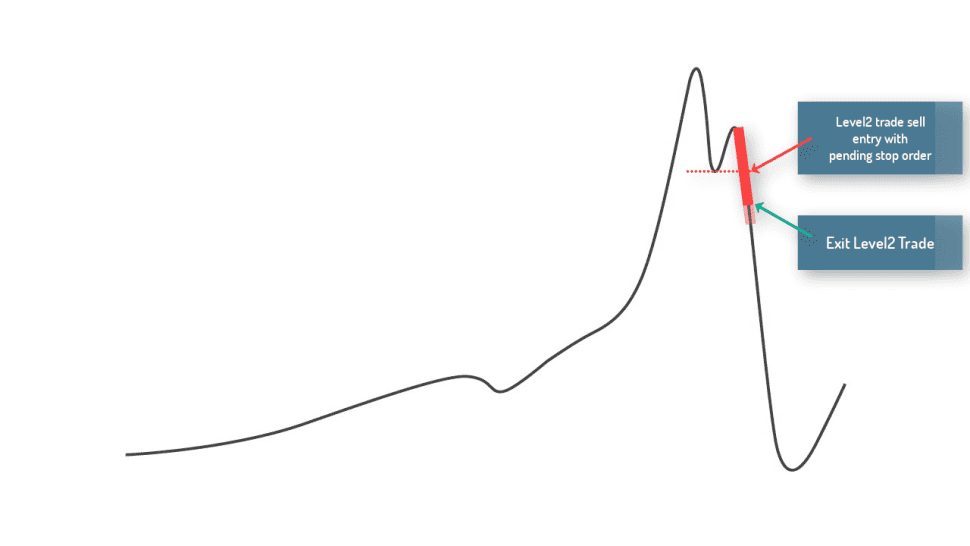 What Is Level1 And Level2 Within Mini-Crashes?

As we have learned in relation to the Mini-Bubbles, the first reversal day is Level1.

In case of a Mini-Crash the first reversal day is a bullish day, which means that the candle of the daily time frame will have green color. 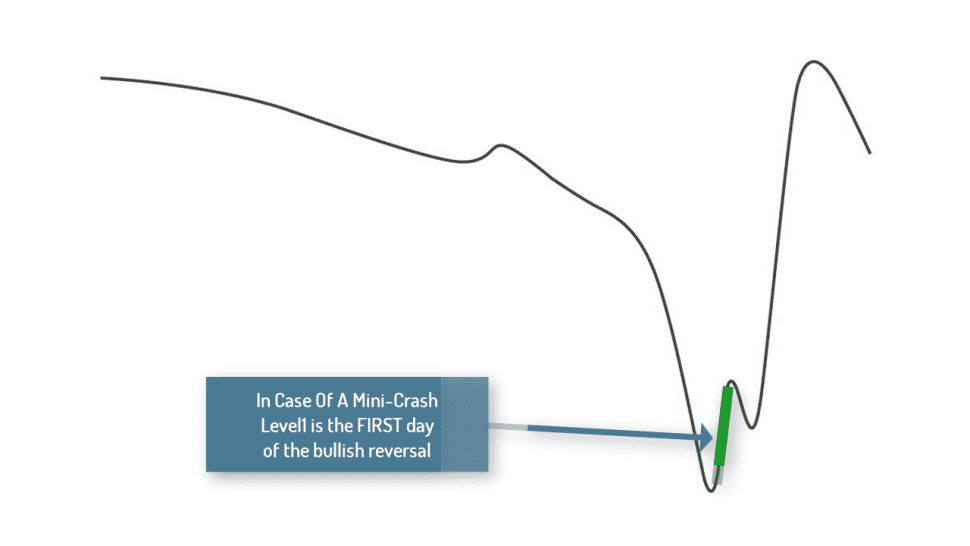 The day after Level1 is called Level2. In our Mini-Crash example, this day will be the second green candle of the daily time frame. 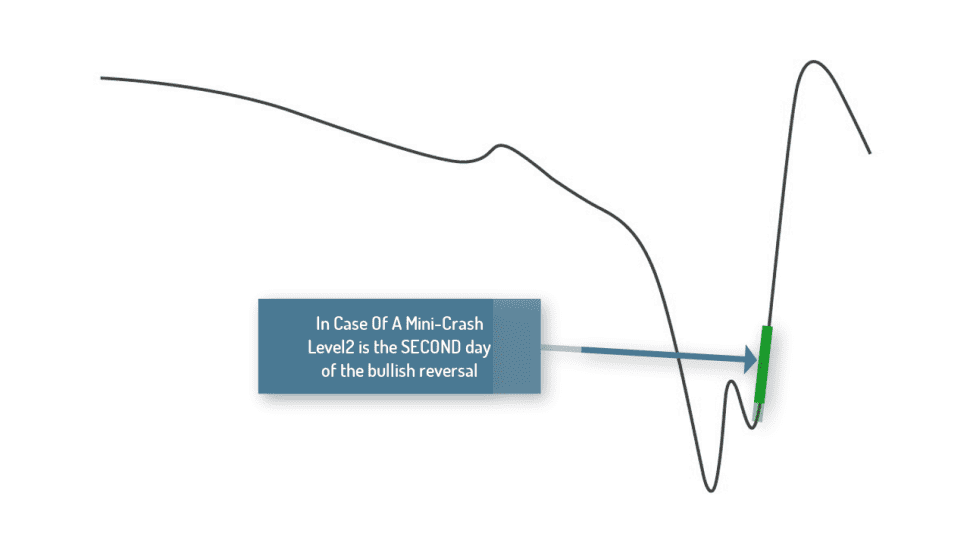 The highest probability zone in a Mini-Crash is directly above the lowest low of the crash. This zone will be nearly always reached. A target price in that area guarantees a very high winning percentage. 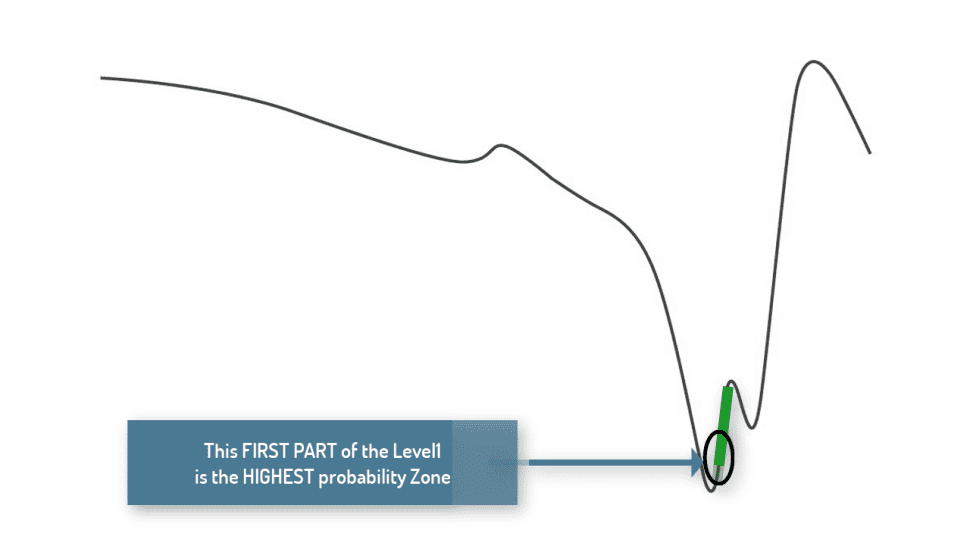 Under special circumstances, which I will explain in a later article in detail, a highest probability zone begins directly above the high of the Level1. 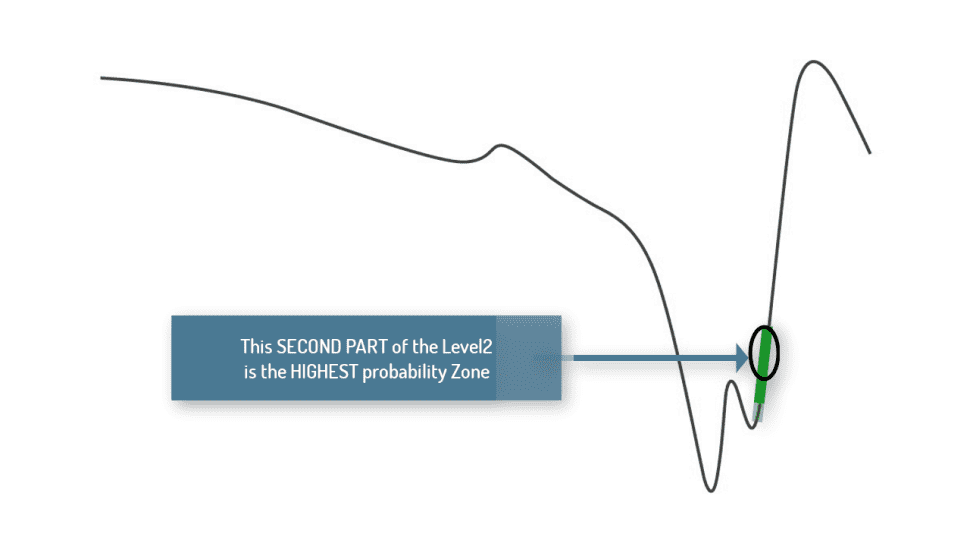 With the Level1 EA we want to pin point the lowest low of the Mini-Crash as exact as possible. In the ideal situation, we only need one buy position before the price shoots upwards to our target price. 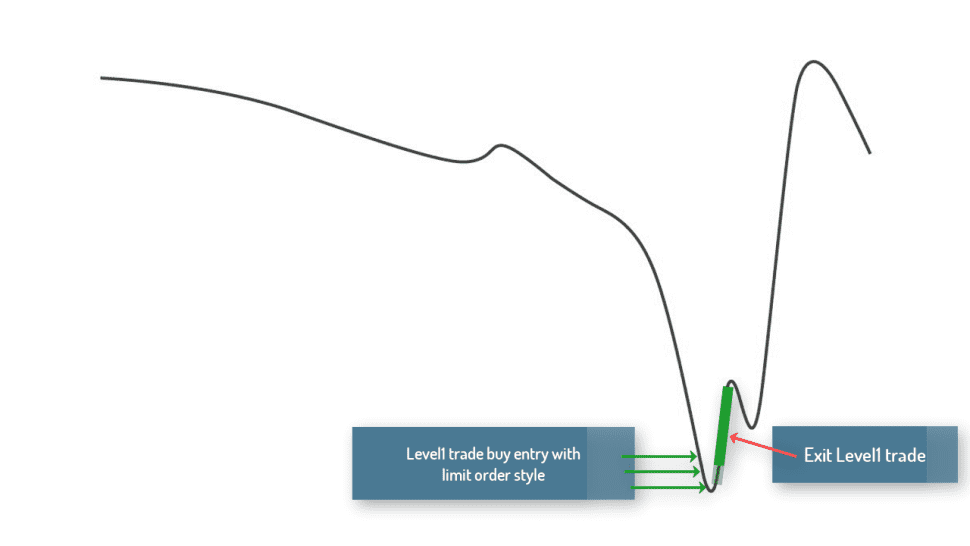 Level2 entries can be done with pending buy orders which we place at the high, or slightly above the high of the Level1. A relatively small target should be chosen e.g. at a previous resistance level. 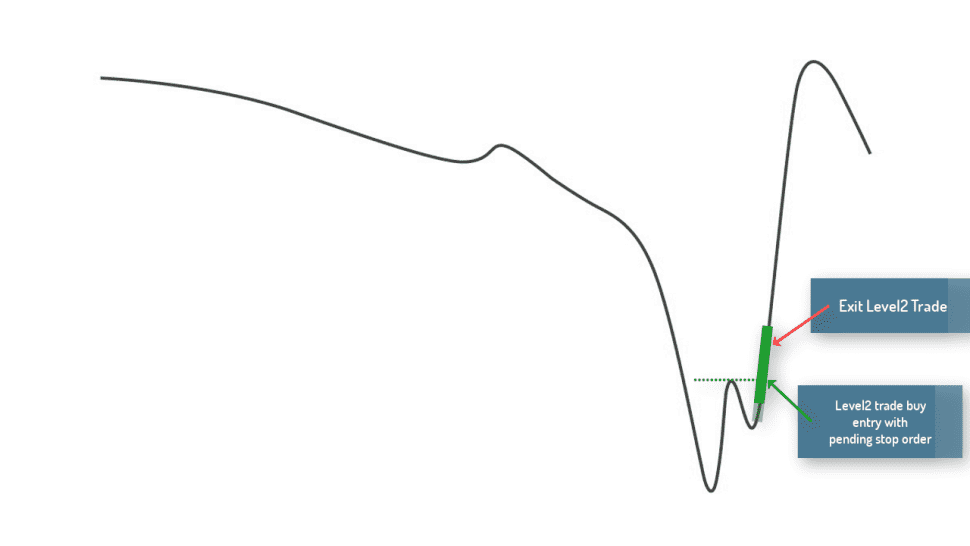