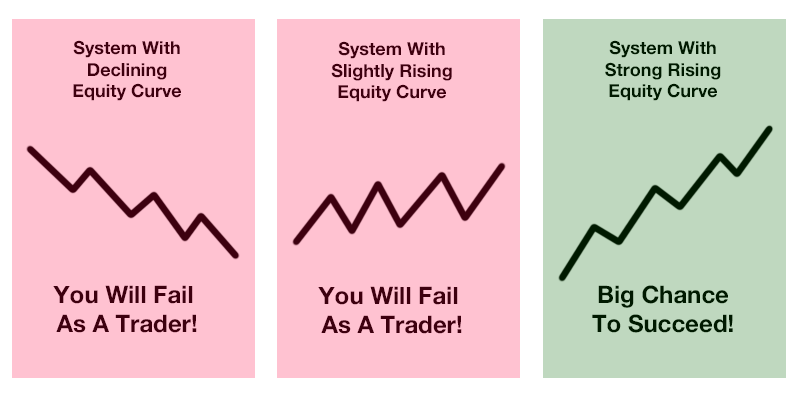 You will fail as a trader, if you do NOT trade with highest quality!

This article will open your eyes. You will learn why most traders fail and what you can do to succeed as a trader.

For a better illustration I have created the 3 graphs in the image above. Each graph represents the equity curve of a trading system (trading rule set) after 100 trades are completed.

In the left graph you can clearly see that the trading system has a negative edge which means that you will lose more money than you win. The more trades you will do the more money you will lose. With such a system you can try to improve your execution skills and money management. But nothing will help. You will stay a constantly losing trader.

In the graph in the middle you can see the equity curve of a slightly profitable trading system. The equity curve is slowly rising but you will experience long lasting and deep drawdown phases. From my own experience since 2007 and if you are psychologically wired as 95% of the population then you will still fail as a trader, although the trading system is profitable in the long run. I will explain the reasons later in this article.

In the right graph you can see a trading system (trading rule set) which produces a huge edge over the market. The equity curve is rising strongly and the drawdown phases are minimal. With such a trading system you have the biggest chance to succeed as a trader. With such a huge edge over the market the negative psychological side effects of trading are reduced to a minimum. Still not everyone will be a successful trader with such a good system (e.g. because of greed, fear, not able to handle a minimum drawdown etc.) but most people will have a big chance to succeed.

Why you will fail with an only slightly profitable system?

I will now explain why you will fail as a trader, if you do NOT strive for the best trading rule set with the biggest possible edge.

The following image shows the outcome of a sequence of 100 trades with a slightly profitable trading system. You can see that the equity curve is slightly rising but you can also see that the drawdown phases (the swings from the recent equity peak to the next equity valley) are huge. 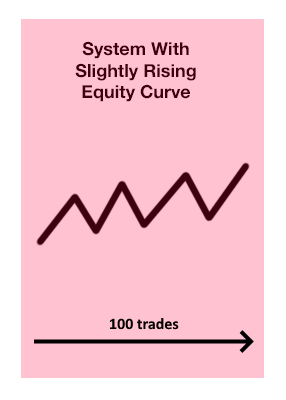 Most people are NOT mentally tough enough (including myself) for this type of rollercoaster with a mediocre good trading system. They will lose money.

The reason why you will most probably lose money is that you will never know where (in relation to the equity curve) you will start trading a new trading system.

Therefore, let's say that you started in the middle of an upward swing of the equity curve labeled with the left black arrow in the following image: 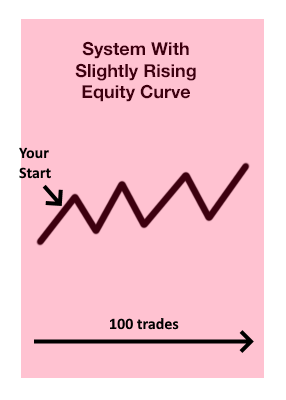 In our example you will hit the bottom of the valley of the equity curve after 20 trades, which is shown in the following image: 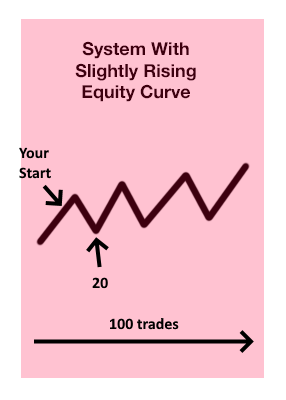 Your account will have a lot less money than before you started trading with the new system. Most traders will have lost their faith into the system at this point.

From my experience from teaching thousands of traders I know that the majority of traders will have already stopped trading the new system even before the 20th trade was executed!

Trading demands work. You need to analyze the charts, spot the entries and execute the trades.

You are accustomed to get paid for your work. But now you have even less money after you did a lot of work. You will have negative emotions!

Therefore, only a small percentage of faithful traders will stay with the trading system and trade further after the 20th trade.

Only 20 mentally tough people will behave against their negative emotions and proceed with the new system. After e.g. trade number 30 those traders will see the trading account in profit for a very short time: 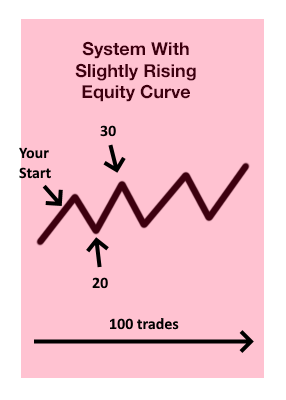 Then after the 30th trade the next (normal) drawdown period of the mediocre trading system occurs.

In our example, the valley of the next drawdown phase is reached at trade number 40: 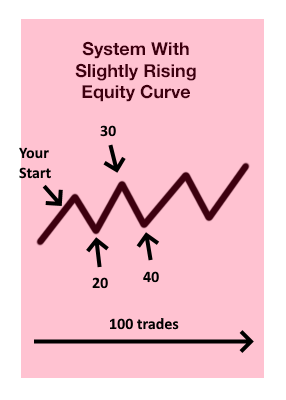 After weeks or even months of hard work your account shows again that you lost money.

You followed the rules of the system, you searched for the trades and executed them properly. And you are still losing money although you did everything correctly!

I estimate that from the remaining 20 people only 10 proceed trading the new system after the 40th trade.

The remaining 10 traders will see the next peak in their trading account at e.g. trade number 60. And after trade number 70 their account will again show that they lost money since they started with the system months ago: 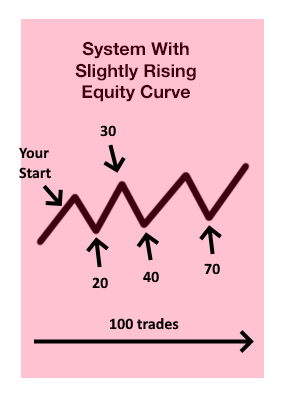 And this drawdown phase around the 70th trade will shake out more traders.

I estimate that from the 100 people who started with the new trading system only 5 traders are still trading the system after the 70th trade. Only those 5 will make money and 95 have lost money.

In my opinion, this is the main reason why 95% of traders fail!

What are these people doing? The answer is:

They search for the next new trading system!

And the next new system that they find is either not profitable at all or mediocre profitable as the last one.

They do some trades and lose money again as soon as the new trading system starts a drawdown phase. Then they stop trading the system. And search for the next system.

This cycle of losing can repeat forever! I know people who did this for 10+ years!

10 years of losing money does not only have a deep negative impact on your financial health. Also your mental health will suffer a lot!

Those people are trapped in "System Hopping". They jump from system to system. And they never benefited from a trading system, even if it is profitable in the long run.

The career of traders who jump from system to system looks as shown in the following image: 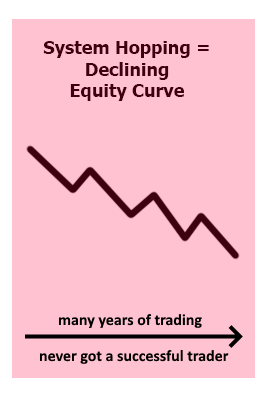 System Hoppers will NEVER get profitable. They are trapped in the losing cycle until they completely quit trading!

But what is the solution to this dilemma? read on :)

The solution to get successful: Trade only with highest quality!

If you are mentally wired as 95% of the population then you need an outstanding good trading system that produces this equity curve: 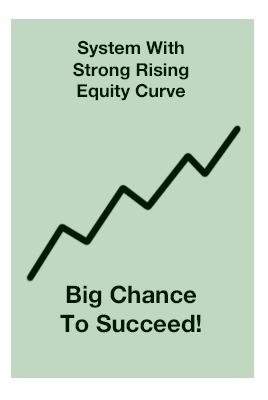 To be a constantly successful trader you need a trading system with a steep rising equity curve and only very small drawdown phases!

In my opinion, this is the only way to succeed as a trader. Otherwise you will get trapped in the "System Hopping"-cycle as explained above.

And how can you achieve such a steep rising equity curve?

Trade only with highest quality!

With "highest quality trading" I mean that you only trade in those market situations where the chance for a successful trade is extremely high.