EURGBP produced a lot of free space to the downside during the past week.

We saw a slight upward trend during the past weeks (the lower thick trend line). During the recent week the trend got slightly steeper and formed a steeper trend line.

On Thursday suddenly a climactic upward move developed. And we know, only one market entity has the power to produce such a sudden rise of the prices: The smart money

Therefore, I strongly assume that the free space to the downside will be revisited soon. After the free space / gap is closed the smart money has given the short position back to the herd with profit again:

In the following screenshot you can see the level where a possible V-Power sell signal or double top signals can occur. The price needs to move above Fridays high first, which will also create a strong bearish divergence:

In one of the recent coaching sessions I explained in detail why I selected the setup on EURUSD which reached my profit targetnearly immediately:

While the exact criteria for this trade entry is explained only within the coaching program, I can explain publicly why this setup was also a perfect setup for V-Power and our Double Top/Bottom system.

You maybe already know, that a good setup gives you an edge from the bigger chart picture.

The edges in this setup were a bullish divergence on the time frame D1 and a stop hunt below an untouched support level, as you can see in the following screenshot:

In the following screenshot I have labeled the stop hunt and reversal. In combination with a divergence you will usually see a long lasting and strong reversal: 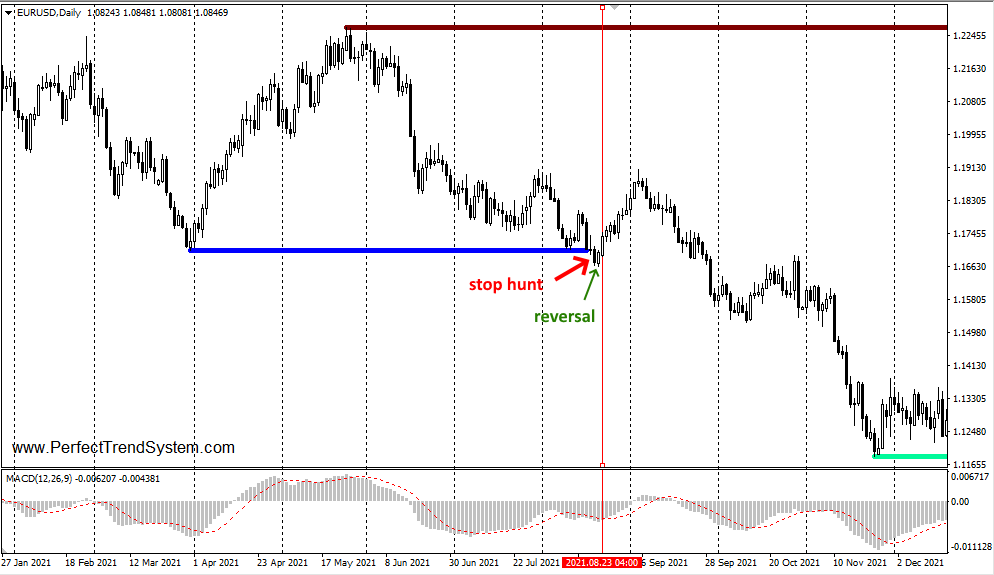 On the time frame H1, where I timed my entry, you can see that we even had an additional edge within this setup.

On H1 there was a regular bullish divergence too which was even a triple swing divergence.

Now we have 3 edges which make the setup extremely good: 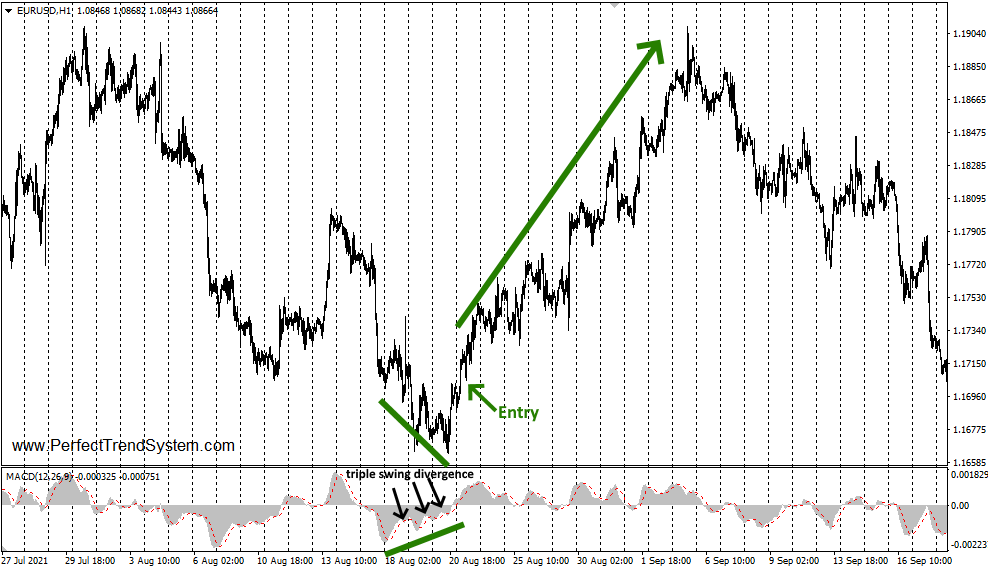 The 3 black arrows are showing that the MACD made higher highs 3 times while price made lower lows. I call this a triple swing divergence. Such divergences are rare and they tell you that a strong reveral is usually not far away.

In the following screenshot you can see the area where the V-Power trading system and the Double Top/Bottom system would give the entry signals: 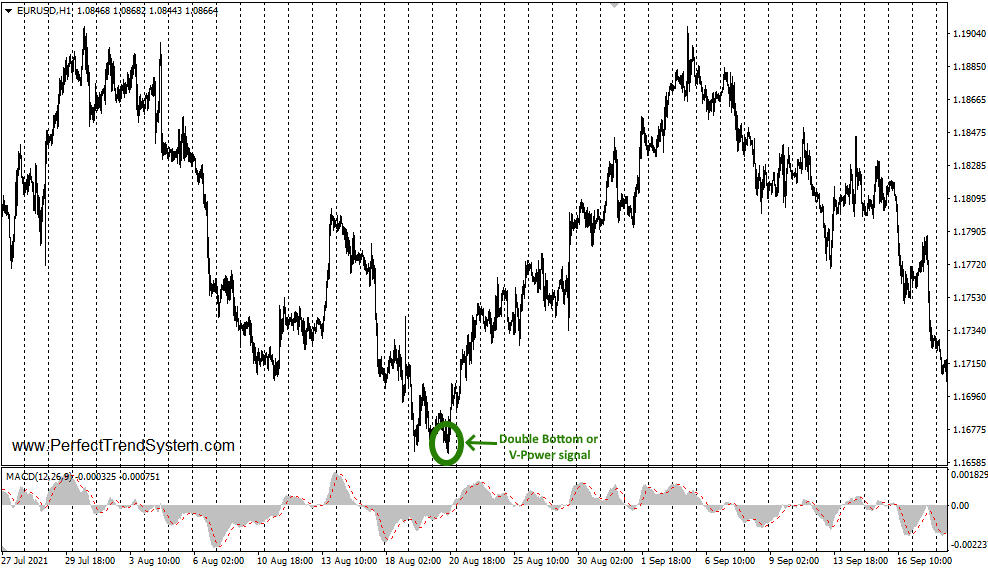 Yesterday EURCHF and EURUSD had the same type of setup. EURCHF produced a V-Power buy signal and immediately reached the profit target (within 5 hours) as you can see in the following screenshot. EURUSD missed my profit target by 2 pips and I exited the trade based on my decision process  explained below.

Both pairs had multiple steep downward days/levels which created free space to the upside and therefore room for a profit move.

And both pairs also showed a bullish divergence (EURCHF on H1 and EURUSD on M30) between the price and the MACD which usually supports an explosive upward move.

As you can see from the EURCHF the explosive upward move reached the target very quickly: 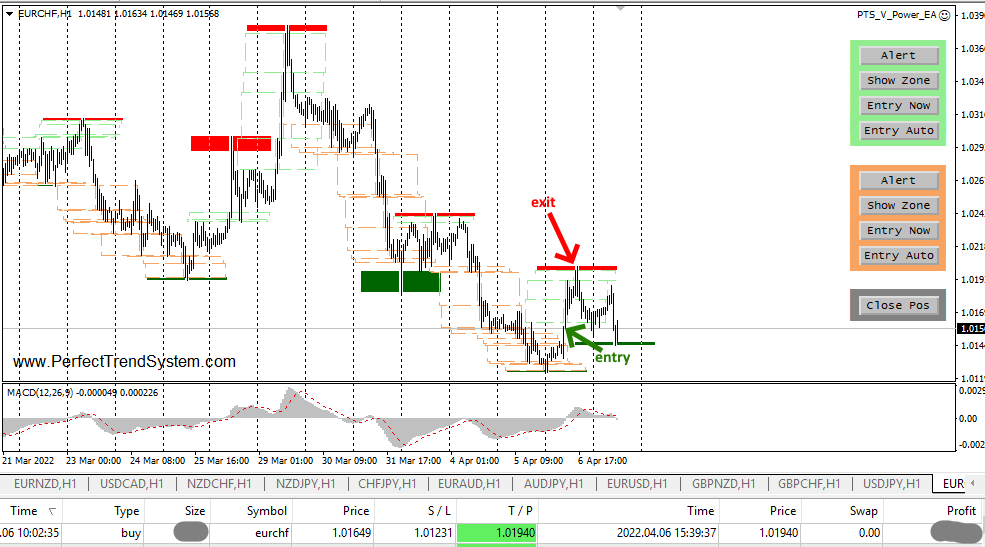 The following chart shows the moment when I announced the signal live in the telegram groups.

We saw 4 quite steep downward days. The previous support level (green line) was taken out and we see a nice V-shape on H1: 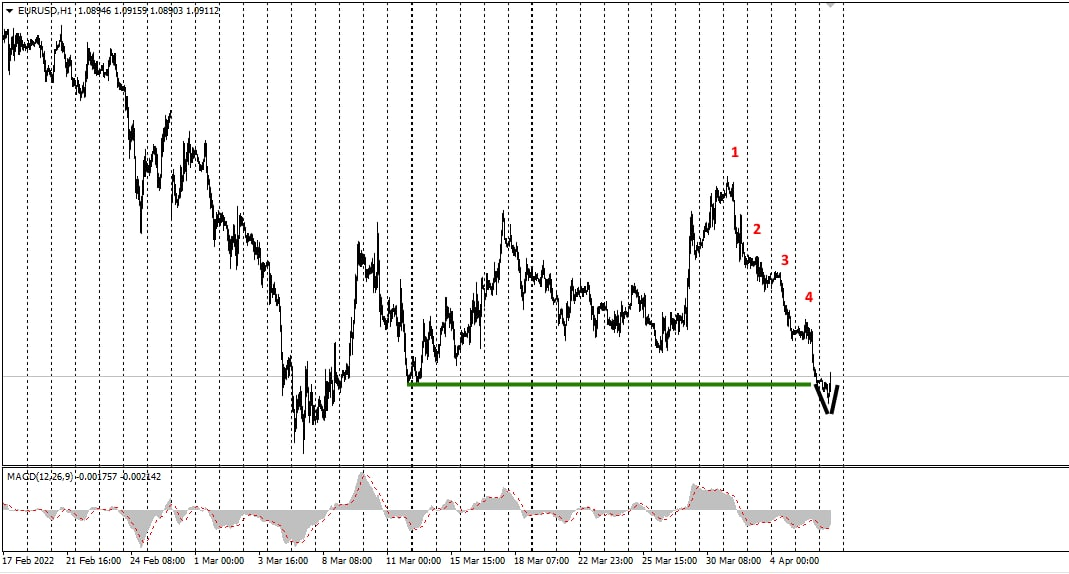 This is a V-Power buy entry signal 👆

There was also a Double Bottom signal M30 which was caught by the DTB EA fully automatic:

Read more about the DTB Alerter and DTB EA here:

EURUSD also shows some kind of free space to the upside (green ellipse). Therefore I called the EURUSD buy signal live in the groups today:

The second partly position was opened by the Double Top/Bottom EA during the pullback.

Now the price seems to explode to the upside and fill the free space (free space = green ellipse):

The target was missed by a few pips before the price moved back to the broken trend line.

Either the trend line holds or I will be out of the trade:

For that purpose I moved the stop loss to the entry price of the second partly position.

If the stop is reached, then it will be only a tiny losing trade. The trade has still some room to develop:

I have now closed the trade with a small profit because I will leave the house soon and it's late in the trading day.

Because it's late in the trading day the chances got lower that we will see a new higher high (although everything can happen in trading as we know 😊).

Both partly positions were in profit when I closed them. Of course I would have loved it to close the trade at a higher price, but that's trading 😎 not every trade reaches the target.

And everyone who knows me for a longer time knows that I prefer to open and close trades on the same day.

Last week our members Shane, Ludwig and Eduardo talked about the great buy trade on SP500 which occurred not long after the Ukrainian war started.

Shane e.g. said that "this trade will forever be legendary" :)

This trade had a huge profit potential and I will explain why this was the case.

Here is the screenshot from the private V-Power telegram group: 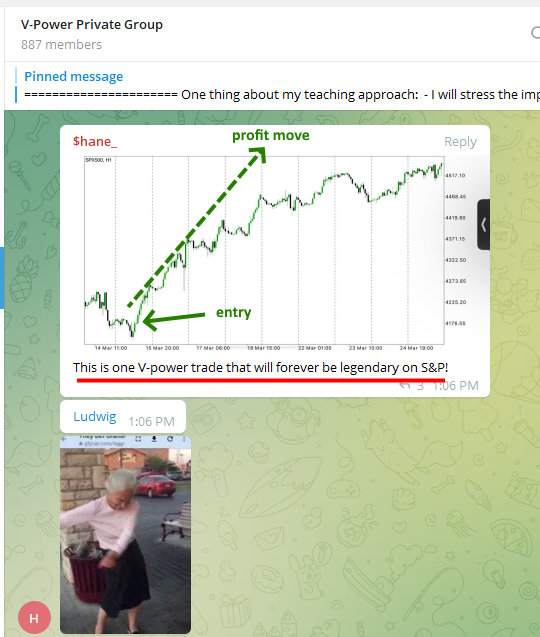 Why was this setup a candidate for a huge winning trade?

If you you look at the following screenshot of the time frame D1 then you can see that the SP500 was in a very strong upward trend since the Covid pandemic breakout in 2020.

In January 2022 we saw a first deeper pullback to the downside which gave room for a bigger profit move to the upside. This deeper pullback gave the opportunity to enter the big trend a quite cheap prices which were not seen since mid 2021.

Then at the end of February the Ukrainian war break out which gave a further push to the downside and even better entry prices to join the upward trend.

On 15th March our members got the V-Power buy entry signal to enter the trend with a very small stop loss distance:

In the following screenshot you can see where the V-Power EA has done the buy entry according to a picture perfect buy entry (V-shape on H1).

You could have placed the target for the trade at the recent resistance level as shown in the following screenshot. This article explains how you can tell the V-Power to use a bigger target distance, even before the trade signal occurred.

In the following screenshot you can see how the target was reached and the V-Power EA has now recognized that the trade is over:

During the past 2 days we watched the YEN pairs closely in our ultimate coaching group because the YEN pairs produced a climactic bubble move after a multiple week upward trend.

So, there were perfect conditions for a heavy reversal to the downside when the bubbles are starting to collapse.

The following screenshot shows the climactic bubble move on USDJPY within the red ellipse. If you spot such an extreme price action with long green candles, then you can be assured this steep price move is unsustainable und you can closely watch for an entry signal into the opposite direction (in this case you want to look for sell trades):

Maybe you have already read our learning thread on forexfactory. If not, then please read the multiple ways how to exploit the collapse of a bubble.

The collapse of the USDJPY bubble produced 2 sell entry opportunities with our trading system STME (Strong Trends with Magic Entries). Follow the link and you can download the free version.

In the following sketch you can see schematically where these two sell opportunities occurred in relation to the bubble: 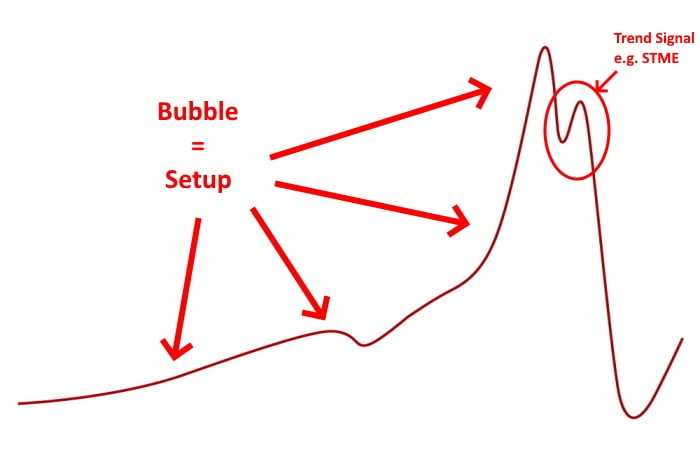 In the following H1 chart of USDJPY you can see the area of the two sell opportunities after the bubble started to collapse.

The red ellipses are labeling the areas where you could have searched for entry opportunities on lower time frames like M1 and M5:

In the following chart you can see one of the sell trading opportunities of the first (left) ellipse in the screenshot above. This trading opportunity fulfilled all criteria of our well known perfect momentum setups.

There was a strong initial downward move. Once the deep pullback occurred, then the orange line started to lead the price. A very good sell entry area was at the upper boundary of the ATR-channel:

The following screenshot shows the position of the entry signals of each system. But why were these signals so especially good? Please read on... 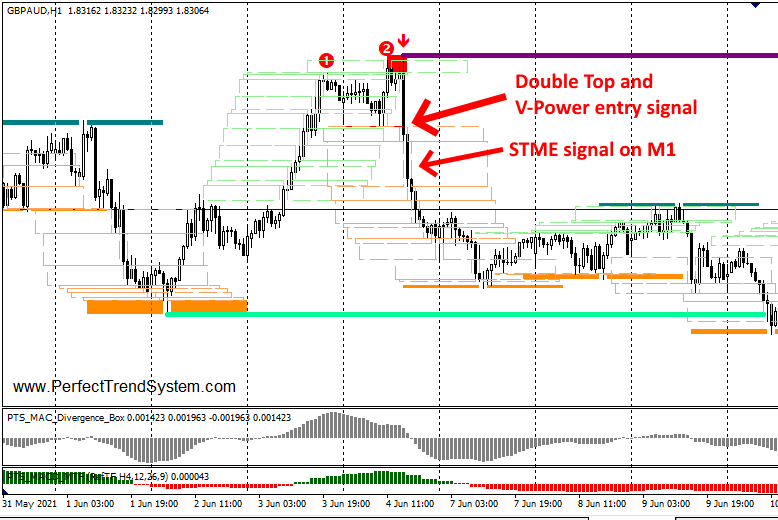 The signals were especially good because the bigger picture gave you many edges. If many edges exist at the same time when a signal is generated then that signal is of highest quality.

I will now explain which edges existed.

The following screenshot shows the time frame H4. You can clearly see that there was a long lasting (matured) upward trend during the past weeks. Especially the beginning of the upward trend was explosive and steep.

Such a steep trend (the left green arrow) produces an overbought condition with a lot of free space (ellipse) where the price can return to the mean. So the price can drop a lot after the trend reverses to the downside.

Also visible on the time frame H4 is that the price went above the recent high (resistance = red horizontal line) before the sell signals occurred. This move above a recent high produces a lot of buy orders in the herd. The smart money sells (at a very good price) into that liquidity and then reverses the price. This fakeout reversal also adds to the probability of the signal. 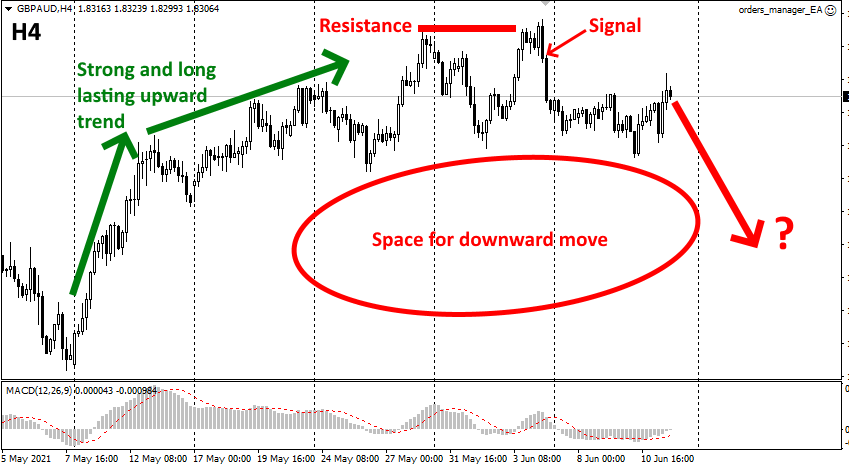 On the time frame H1 you can see that there was a classical 3 level/day push by the smart money to the upside which lead the price above the resistance level.

Especially level 2 was very big and steep (level 2 is usually the biggest level in the 3 day cycle) and produced a lot of free space where the price can move after the change of the direction of the trend from upward to downward trend.

The level 3 upward move produced a regular bearish divergence between the price and the MACD, which is also a great additional edge. 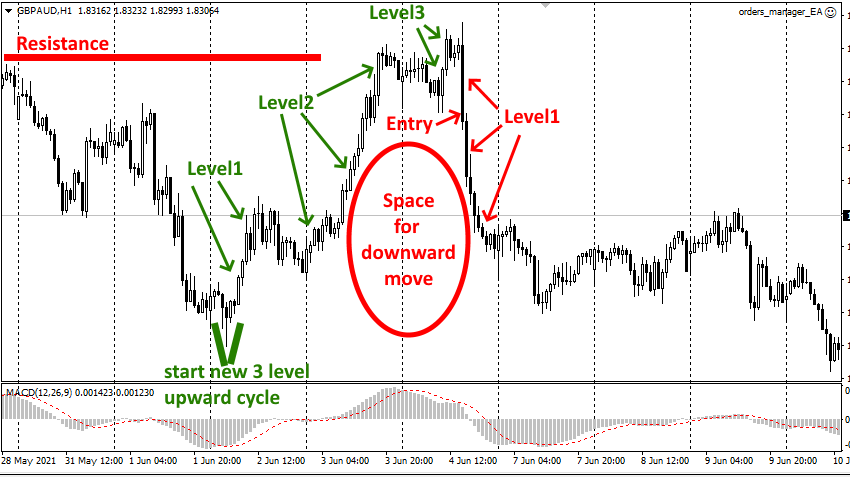 Therefore, there were multiple edges available in the moment when the entry signals occurred. Each edge adds to the probability (success rate) of the signal.

- bearish divergence on H1 at resistance

- the free space on H1 can be an orientation for short-term holders (e.g. intraday) to time the exit