Golden setups are high probability setups which produce a huge edge over the market.

They are one of the best setup types that I detected since I started my trading journey back 2007.

And the best thing is:

I will announce such setups via email for FREE :)

As long as you stay on my email list you will enjoy this high value service!

Why are Golden Setups important for you?

Golden Setups are a performance booster for nearly every short term trading strategy. When such a setup occurs then multiple edges come together at the same price level.

Such setups have raised my winning percentage by 20% to 30% in the past.

But there is one drawback: You will trade less often. You will need to wait patiently for such setups!

But your patience will be rewarded :) You will have less stress because of smaller losing streaks and a much smoother equity curve.

After you developed the patience your equity curve can transform like this:

From the beginning of this year I traded a new rule set in the private V-Power group live in front in front of hundreds of traders. That rule set contains the part "waiting for Golden Setups".

As you can see, that rule set produced quite a good edge: 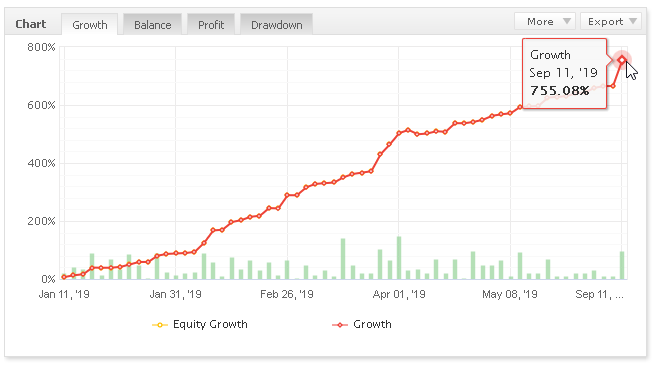 What are Golden Setups exactly?

Now it gets a little bit technical.

But no fear, you don't need to detect these things yourself. My indicators and I will do that for you :)

A Golden Setup consists of:

1. A regular divergence on M30 or H1 and at the same time

The Divergence Box Indicator uses also these boxes to display the divergences directly on the chart.

The following sketches are showing the same divergences but without the MACD to give a clear view on the important parts. Only the red and green boxes are shown to highlight the areas of the divergences:

The next two sketches are showing Golden Setups!

The Support/Resistance MTF Indicator can draw these support/resistance price levels on the chart for you.

As a result of the general trading wisdom we can say:

- Divergences are an edge, because more often than not they reverse the direction of the trend.

- Support and resistance levels are an edge, because more often than not they reverse the direction of the trend.

And the key thing that makes the Golden Setups so good is that both edges occur at the same time!

And if both edges occur at the same time, then the probabilities of both edges add to each other.

What does this adding of probabilities mean?

So I simply assign the following estimated values how often the trend gets reversed:

1. Divergences reverse the trend 60% of the time

2. Support/resistance levels reverse the trend 60% percent of the time

So how big is the combined edge when two edges with 60% probability occur at the same time?

How is it calculated?

That's the big advantage of Golden Setups where two edges occur at the same time!

Even if both edges only produce 55% probabilities, then a combination of both produces an edge that has 79% probability!

So, whatever the real probability percentages of divergences and support/resistance levels are, you will always do yourself a favor if you wait until both edges occur at the same time :)

How can you use Golden Setups?

You can probably use the announcements of the Golden Setups with many short term trading strategies.

However I announce them especially to support everyone in his trading who trades:

The trading systems listed above on the advocated timeframes harmonize perfectly with the Golden Setups.

A real chart example of a Golden Setup

Now you will see a real-chart example of a Golden Setup that I recently announce live and in advance in all telegram groups.

The following H4 chart shows the moment when I announced the Golden Sell Setup on AUDNZD.

On the H4 timeframe you can see the thicker resistance line that I have marked with the red downward arrow:

The next screenshot shows the timeframe H1. Here you can see in addition to the major resistance lines a small red rectangle (it is more a red point than a rectangle at this moment, because the divergence has started to develop):

The next screenshot shows the power of the Golden Setups when 2 edges come together. A short time after the resistance line was broken (the buy stops of the herd were triggered above the resistance) the sharp and strong reversal to the downside occurred:

The next screenshot shows the reversal on the timeframe H1. you can see the big red rectangle that developed during the bearish divergence:

So how can you use this high probability reversal?

As soon as I announce such a reversal you can then activate the alerting functionality of the 3 systems V-Power, DTB-Alerter and MagicEntry for a sell setup on the appropriate instrument (here AUDNZD).

In the case of the MagicEntry-System you would have received a very profitable sell signal at the price level labeled with the black arrow in the following screenshot:

On the signal timeframe the situation looks as shown in the following screenshot. You would have enjoyed a huge immediate winning trade because of the strong downward momentum:

A V-Power sell signal within the Golden Sell Setup on AUDNZD would have looked similar to the drawing in the following screenshot:

A Double Top Signal on M30 or H1 within the Golden Sell Setup on AUDNZD would have looked similar to the drawing in the following screenshot: