Mike has developed three strategies based on double top/double bottoms:

The following Mike’s sketch shows how Double Tops with fake breakouts look like. The fake breakout is the price move behind the left leg of the Double Top followed by a fast reversal: 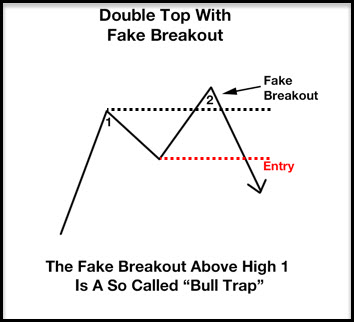 This setup (double top) are initiated by the smart money when they want to reverse the trend. Smart money develops a final accumulation of the positions called traps.

These trade are profitable because there is a psychology behind the setups Double Top:

Before a double top is created by the smart money the smart money already accumulated a short position during the preceding upward move. The purpose of the fake breakout (2 -> the bull trap) below the left leg (1) is to mislead as much traders as possible into a long position. As soon as the majority of the herd starts buying into the fake breakout, the smart money starts selling heavily and absorbs all long orders of the herd. When this task is completed then the smart money drives the price very fast downwards. Now the double top is drawn on the chart. The trapped long traders are in panic and are selling their position back to get flat or even reverse their position. This shift of psychology in the herd creates these very fast and profitable moves after a double top with fake breakout is created. 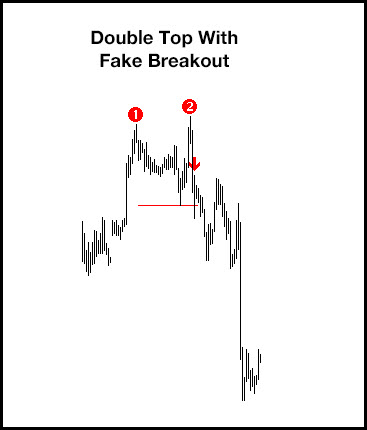 This week, on W1/D1 we’re seeing the market is going to hit your major support level that could act as a “Strong Floor”. The Revelant Key Levels are Resistance at 0.8595 (long term) and Support at 0.8454. Since January 14th the trend has been too bearish. The major support @ 0.8454 has been broken. As can bee seen in the chart there is a previous giant bullish divergence.

The next screenshot on H4 shows the prevois situation which caused the faill, triple confluence with major resistance, double top pattern(H1) and divervence (H4/H1). Falling was around 80 pips.

In the time frame H1 you can see two trend lines:

A bullish divergence (red rectangle) developed in this same time frame which already gave a signal that a reversal to the upside is about occur and price weakening from MACD.

Double Top/Bottom Indicator draws the Double top on January 14th at the major resistance. A rapid price action movement in the opposite direction (upward trend)occurs to the previous trend (bullish). This rapid price action is the release phase from the market maker.

This indicator showed us precise point to enter (labeled with red rectangle) at the break of the neckline of the double top.

Signals V_Power_Setup and Possible Golden Setup at the moment

The following signals were get from MT4 alerts on January 22th and January 23th in real-time when a possible entry signal was created.

I recommend do the setps mentioned below:

Rule #1: Search only for V-Power Setups after a day which closes near the high / low of the day!

Rule #2: A tight range must develop during the Asian session with a duration of 10+ hours!

Rule #3: An additional move out of the tight range in direction of the previous day must develop

Rule #4: Choose only those entry signals which occur at least 20 hours after the tight accumulation range started

Rule #5: Choose only those entry signals which occur at least 5 hours before the trading day ends

I'm Mike Semlitsch the inventor of the PerfectTrendSystem. I'm in the trading business since 2007. Helping other traders to succeed in trading is my passion. The PerfectTrendSystem is the result of more than 30,000 hours of hard work. Connect With Me: